This release reports labour productivity estimates for Quarter 4 (Oct to Dec)12016 for the whole economy and a range of industries, together with estimates of unit labour costs. Productivity is important as it is generally considered a driver of long-run improvements in average living standards.

Labour productivity is calculated by dividing output by labour input. Output refers to gross value added (GVA), which is an estimate of the volume of goods and services produced by an industry, for the UK as a whole. Labour inputs in this release are measured in terms of workers, jobs (“productivity jobs”) and hours worked (“productivity hours”).

For the first time, experimental quarterly estimates of labour input for English regions and devolved nations are published in tables alongside this release. These will be published regularly each quarter in the tables accompanying the labour productivity bulletin.

The equations for labour productivity and ULCs can be found in the Quality and methodology section.

The output statistics in this release are consistent with the latest Quarterly National Accounts published on 31 March 2017. Note that productivity in this release does not refer to gross domestic product (GDP) per person, which is a measure including people who are not in employment.

The labour input measures used in this release are consistent with the latest labour market statistics as described further in the Quality and methodology section of this bulletin. Measures of jobs and hours worked in this release are affected by revisions from data sources feeding into workforce jobs. These affect the industry splits of jobs and hours worked, as well as the whole-economy estimate for jobs. Unless otherwise stated all figures are seasonally adjusted.

Quarterly growth of 0.4% is below the 1994 to 2007 average – which even taken together with recent stronger quarters, provides little sign of an end to the UK's “productivity puzzle”. This term refers to the relative stagnation of labour productivity since the recent economic downturn. This is in contrast with patterns following previous UK economic downturns where productivity initially fell, but subsequently bounced back to the previous trend rate of growth. There is wide and varied economic debate regarding the causes of this puzzle, and further analysis of recent UK productivity trends can be found in the January 2016, May 2016 and June 2016 Economic Review, and also in several standalone articles including: What is the productivity puzzle?, The productivity conundrum, explanations and preliminary analysis, and The Productivity Conundrum, Interpreting the Recent Behaviour of the Economy.

Figure 1: Output per hour and output per worker, UK

Download this chart Figure 1: Output per hour and output per worker, UK

Notes for: Labour productivity up for the fourth consecutive quarter

Figure 3 examines longer-term trends, showing output per hour and its components since Quarter 1 (Jan to Mar) 2008. Services are represented in the first panel, while manufacturing is represented in the second. Manufacturing output per hour has been more volatile than services in recent years. This reflects a divergence of manufacturing gross value added (GVA) and hours, most pronounced in 2009 and 2011 to 2012, whereas GVA and hours for services follow fairly similar trends. However, in recent quarters services GVA grew faster than hours, potentially marking a break from this trend. 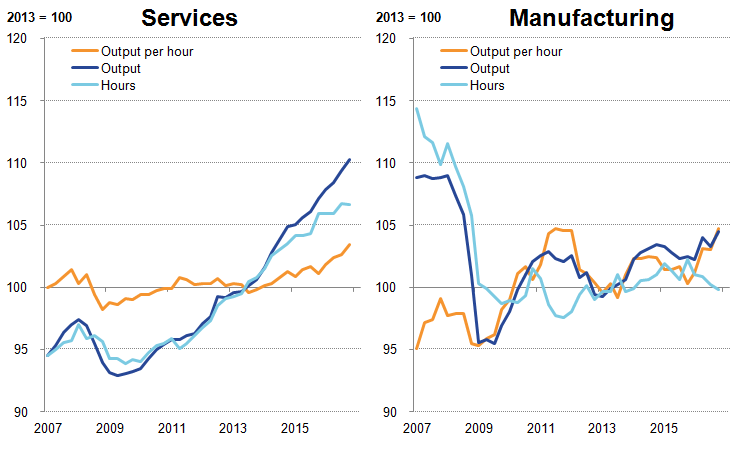 Unit labour costs (ULCs) reflect the full labour costs, including social security and employers’ pension contributions, incurred in the production of a unit of economic output. Changes in labour costs are a large factor in overall changes in the cost of production. If increased costs are not reflected in increased output, for instance, this can put upward pressure on the prices of goods and services – sometimes referred to as “inflationary pressure”. ULCs grew by 2.1% in the year to Quarter 4 (Oct to Dec) 2016, reflecting a larger percentage increase in labour costs per hour than output per hour.

While growth in ULCs has been broadly positive since the period following the recent economic downturn, averaging around 1.5% since Quarter 1 2008, there has been substantial variation during this period. During the recent economic downturn, ULCs began to grow at a relative high rate, reaching a peak of 6.8% by the end of the downturn in Quarter 2 (Apr to June) 2009 and remaining elevated until Quarter 1 2010. Figure 4 shows that the initial increase in ULC growth during the downturn was driven by falling output per hour, but from Quarter 2 2009 onwards increasing labour costs per hour were the driving factor. Following the downturn, growth in ULCs began to slow, eventually becoming negative in Quarter 4 2010. Since then ULC growth has been either low or negative, reflecting both low growth in hourly labour costs and productivity. The most recent quarterly observations are at the higher end of the range observed since 2011 – and are notably stronger than 2 years earlier – but have been relatively stable. This increase broadly reflects higher hourly labour cost growth, with little offsetting output per hour growth.

5 April 2017: UK productivity introduction: Oct to Dec 2016 draws together the headlines of the productivity releases into a single release, providing additional analysis of our productivity statistics.

Lastly, we publish a range of Public sector productivity measures and related articles. These measures define productivity differently from that used in our labour productivity and MFP estimates. Further information can be found in Phelps (2010) and in an information note published on 4 June 2015.

Revisions in this release are small and primarily come from regular and scheduled revisions to source data. Revisions from Quarterly National Accounts affect data from Quarter 1 (Jan to Mar) 2016 onward. Revised seasonal factor estimates from Quarter 1 2015 onward for whole-economy hours affect both whole economy and industry hours estimates. Revisions to jobs estimates affect both hours and jobs at the industry level, with the effects concentrated in the most recent years.

The measure of output used in these statistics is the chain volume (real) measure of gross value added (GVA) at basic prices, with the exception of the regional analysis in Table 9, where the output measure is nominal GVA (NGVA). These measures differ because NGVA is not adjusted to account for price changes; this means that if prices were to rise more quickly in one region than the others, then this would be reflected in apparent improved measured productivity performance in that region relative to the others.

Labour input measures used in this bulletin are known as “productivity jobs” and “productivity hours”. Productivity jobs differ from the Workforce Jobs (WFJ) estimates published in Table 6 of our labour market statistical bulletin, in three ways:

Industry estimates of average hours derived in this process differ from published estimates (found in Table HOUR03 in the labour market statistics release) as the HOUR03 estimates are calculated by allocating all hours worked to the industry of main employment, whereas the productivity hours system takes account of hours worked in first and second jobs by industry.

Whole-economy ULCs are calculated as the ratio of total labour costs (that is, the product of labour input and costs per unit of labour) to GVA. Further detail on the methodology can be found in revised methodology for unit wage costs and unit labour costs: explanation and impact. The equation for growth of ULCs can be calculated as:

A research note, Sources of revisions to labour productivity estimates, is available on the archived version of our website, and further commentary on the nature and sources of the revisions introduced in this quarter is available in the UK Productivity Bulletin – Introduction.