Flash estimate of productivity for Quarter 4 (Oct to Dec) 2016 based on preliminary GDP and labour market data.

This flash estimate of UK productivity uses the first available information on output and labour input for the quarter. This data may be revised in subsequent months. As such, we release the more detailed productivity bulletin after the third estimate of GDP for the quarter is published, which will be consistent with the Quarterly National Accounts.

Figure 1: Percentage change on previous quarter and Index of Output per hour 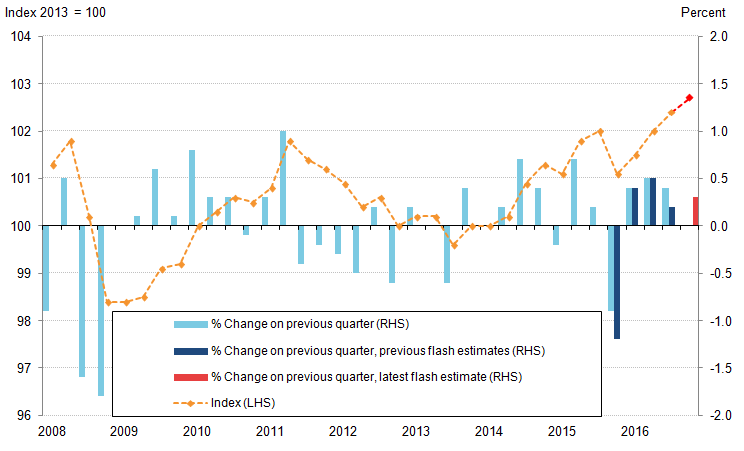 Download this image Figure 1: Percentage change on previous quarter and Index of Output per hour

Although output per hour is now estimated to have grown for 4 consecutive quarters, the rate of growth during the recovery remains weak by historic standards. UK productivity growth has been weak since the onset of the economic downturn in Quarter 1 (Jan to March) 2008 as a result of the relative strength of the labour market compared with GDP.

Both employment, which captures the total number of people in work, and total hours, which captures both changes in employment and working patterns, fell in the course of the economic downturn, but total hours fell further reflecting falls in the average hours of those in employment. However, as GDP fell by a larger proportion in the economic downturn than hours or employment and has grown slowly by historical standards during the recovery, productivity growth has been subdued since the downturn and has recovered more slowly than following previous downturns.

Productivity growth in Quarter 4 was largely a result of higher output; the most recent estimate of GDP indicated that the UK economy grew by 0.6% in Quarter 4 (Oct to Dec) 2016. Figure 2 shows that in Quarter 4, the economy was 8.7% larger than the pre-downturn level of output in Quarter 1 2008.

In the latest quarter, the services industries continued to be the main driver of growth in output as it was the sole contributor to the quarter-on-quarter percentage change in GDP: production, construction and agriculture each contributed 0.00 percentage points to the growth of output over this period.

Within the services industries, the largest contributions to GDP growth in Quarter 4 2016 came from consumer-focused businesses. Industries such as retail trade; travel agencies; and the trade and repair of motor vehicles all performed strongly. Within the production industries, manufacturing output increased by 0.7% in Quarter 4 2016, electricity, gas, steam and air conditioning supply increased by 3.9%; and water supply, sewerage, waste management and remediation activities increased by 1.7%. However, this positive growth was offset by a 6.9% fall in mining and quarrying output. Construction output was estimated to have increased by 0.1% during Quarter 4 2016, following a fall of 0.8% during Quarter 3 2016.

February’s UK Labour Market release shows that there were 31.8 million people aged 16 and over in work in Quarter 4 2016, 38,000 more than the previous quarter and 303,000 more than a year earlier. Growth in output per hour was dampened by total weekly hours worked increasing by 0.3% on the quarter, reflecting an increase of 0.2% in average weekly hours worked and the increase in employment.