This article contains updated estimates of output, inputs and productivity for public service healthcare in the UK between 1995 and 2013, and new estimates for 2014. Public service healthcare productivity is estimated by comparing the growth of service output with the growth of inputs used. Healthcare output is a measure of the quantity of healthcare delivered adjusted for the quality of delivery and is presented for separate healthcare sectors. Healthcare input is the quantity of labour, goods and services, and fixed capital consumption used in the provision of healthcare.

The average annual growth rate of public service healthcare productivity in the UK from 1995 to 2014 was 0.9% per year.

This is the fifth consecutive year of positive public service healthcare productivity growth since 2009.

Output growth of 5.2% in 2014 was higher than the average for the series of 4.7%, with hospital and community health services the largest driver behind this increase.

This article introduces the concepts of productivity, gives an overview of the trends in public service healthcare productivity in the UK between 1995 and 2014 and provides more detail on composition of the output and input measures used in calculating productivity1.

It is important to note that while these productivity estimates provide a measure of the amount of output which is produced for each unit of input, they do not measure value for money or the wider performance of public healthcare services. They do not indicate, for example, whether the inputs have been purchased at the lowest possible cost, or whether the desired outcomes are achieved through the output provided.

Healthcare output is the quantity of healthcare provided adjusted for the quality of delivery. The quantity output is measured as the number of individual healthcare activities performed and can also be described as volume output. The quality of delivery is measured using a combination of indicators including survival rates, waiting times, primary care outcomes and results from the National Patient Survey. Healthcare inputs are composed of labour (measured as full-time equivalent staff numbers), goods and services, and consumption of fixed capital. Further information on methods, including information about data used for the different component countries of the UK and how these are aggregated to a UK index, is available in our sources and methods paper2.

Estimates are published on a calendar year basis to be consistent with the UK National Accounts, and form part of Public service productivity estimates: total public service, 2014. 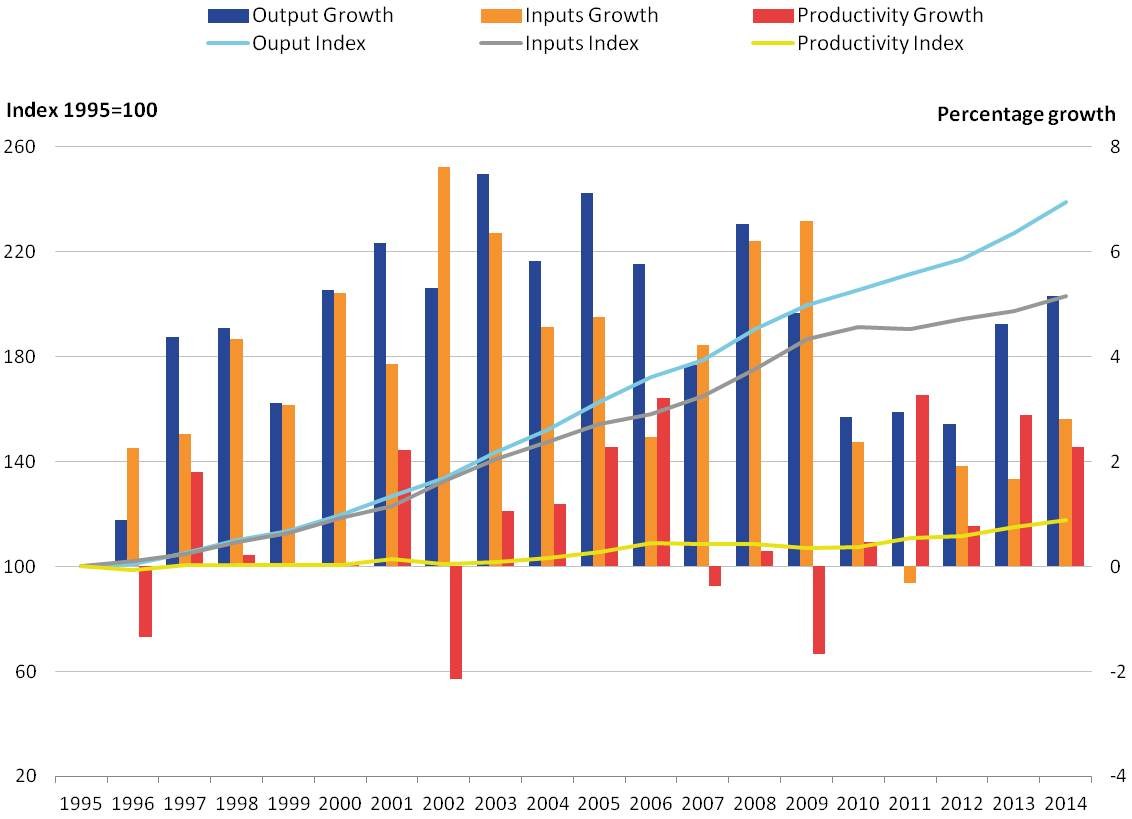 Inputs to publicly-funded healthcare are broken down into 3 components:

Estimates of labour inputs are based on direct measurement of the change in the number of full-time equivalent employees of the health service, weighted by their average salaries. Inputs for goods and services are estimated indirectly, using appropriate deflators for each sub-component, to remove the effects of price changes from current price expenditure. Capital consumption is measured using the perpetual inventory method, as used in the National Accounts.

In order to produce a measure for total inputs, the growth rates of the 3 input components are weighted by their share of total expenditure and then combined.

Figure 2a shows the inputs growth by component before it is weighted by expenditure share. Figure 2b presents this information after weighting, showing how growth in each component contributes to the growth in overall inputs. These charts show an increase in the growth rate of all 3 components of healthcare inputs in 2014, resulting in growth in total inputs of 2.8% in 2014, up from 1.7% in 2013.

Figure 2b: Public service healthcare contributions to inputs growth by component, 1996 to 2014

Download this chart Figure 2b: Public service healthcare contributions to inputs growth by component, 1996 to 2014

The pattern of much slower inputs’ volume growth from 2010 onwards coincides with the Nicholson efficiency challenge2 and the QIPP programme (Quality, Innovation, Productivity and Prevention) targeting efficiency savings within the English NHS.

Healthcare output is measured as the quantity of healthcare delivered adjusted for changes in the quality of delivery. The quantity measure of output is estimated using a cost-weighted activity index and can alternatively be described as volume output. To produce this measure, the growth rates for thousands of individual healthcare activities are calculated and then weighted by their proportion of total expenditure. As a result, growth in high-volume and expensive treatments have a greater impact on the outputs index than a similar rate of growth in uncommon and low-cost treatments.

The quantity of healthcare is estimated separately for each of the following sectors, which are weighted together to produce an overall quantity output series:

Figure 3a shows the quantity output growth by component before it is weighted by expenditure share. Figure 3b presents this information after weighting each of the 4 components together to show how much growth in each component contributes to the growth in overall output quantity.

Figure 3b: Public service healthcare contributions to quantity output growth by component, 1996 to 2014

Download this chart Figure 3b: Public service healthcare contributions to quantity output growth by component, 1996 to 2014

Figure 3a shows that the quantity output from Hospital and Community Health Services (HCHS) has grown in every year of the measured time series, averaging a growth rate of 3.4% per year. The growth rate of HCHS output was higher than this average between 2012 and 2014, following a period of lower-than-average growth rates between 2009 and 2012.

Family Health Services (FHS) is the second largest component of quantity output by expenditure share, at 16% of healthcare expenditure. Growth in the output of FHS has generally been lower than the other components of healthcare outputs over the period, with an average growth rate of 1.9% between 1995 and 2014. FHS output grew by 2.0% in 2014.

The remaining components of healthcare outputs, GP-prescribing and non-NHS activities, each have expenditure shares of approximately 10%.

There was a steady downward trend in the growth rates of GP-prescribed drug activities over the series, from a maximum of 14.2% in 2000 to 3.2% in 2011, after which it has levelled out. Growth remained at a similar level of 4.2% in 2014. The fall is partly due to the number of items prescribed growing at a slower rate than before and also expenditure falling as a result of reduced prices for drugs2 through negotiating discounts and increased use of generic (non-branded equivalent) drugs3.

Whilst growth in non-NHS provision was historically quite volatile, it has stabilised in recent years following a rapid decrease in growth rates from 21.8% in 2007 to 7.4% in 2010, although growth in non-NHS output rose to 9.7% in 2014. Despite its share of total expenditure more than doubling over the period to more than 10% in 2014, the impact of non-NHS provision on the high growth rates on total public service healthcare output was limited to no more than 2 percentage points during any year in the series.

Public service healthcare output grew in all years across the series. As with inputs, growth rates for quantity output between 2000 and 2009 were higher than those between 2009 and 2014, averaging 5.3% and 3.3% per year respectively. However, the reduction in growth between 2009 and 2014 was less severe for output than inputs, resulting in stronger productivity growth during this later period.

Growth in the quantity of healthcare provided should be seen in the context of an ageing population and its implications for healthcare demand. While the total UK population grew at an annual average of 0.6% over the period 1995 to 2014, the population aged over 75 grew at 1.3%. However, research by bodies such as the Organisation for Economic Co-operation and Development suggests that demographic effects, such as a larger population and increasing number of people aged over 75, have a relatively small impact on healthcare expenditure and output growth. Factors such as medical advance, healthcare institutions and public expectations are viewed as more significant factors in explaining increases in healthcare expenditure over time4.

Dataset 2: Quantity growth and contributions to growth for public service healthcare quantity output by component, 1995 to 2014

In line with the recommendations of the Atkinson Review1 a quality adjustment is applied to the estimate of healthcare quantity output2. The adjustment reflects 2 dimensions of quality:

Figure 4 shows growth in the quantity and quality measures of healthcare output.

Effect of quality adjustment on productivity 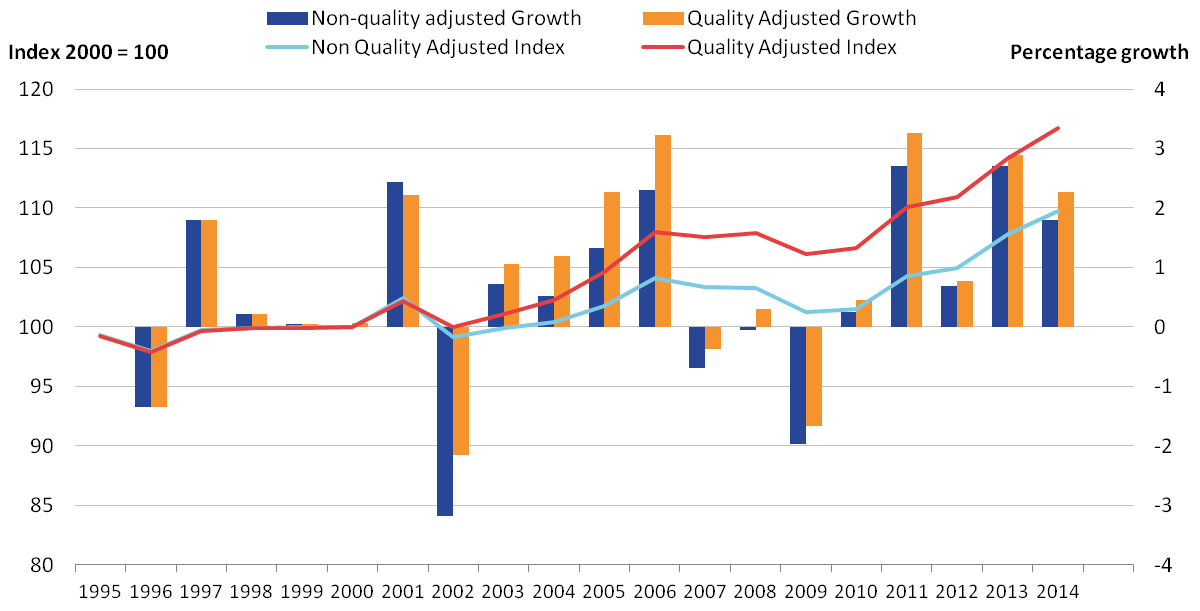 The revisions are a result of small methodological changes, as well as revisions to update the source data. This release incorporates data on agency staff in the goods and services inputs throughout the 1995 to 2014 time series, resulting in a revision to inputs. There has also been a change to the data source for consumption of fixed capital1, as a result of developments undertaken in the national accounts.

Figure 6b: Growth rate and index for public service healthcare productivity for current and previous publication, 1995 to 2014 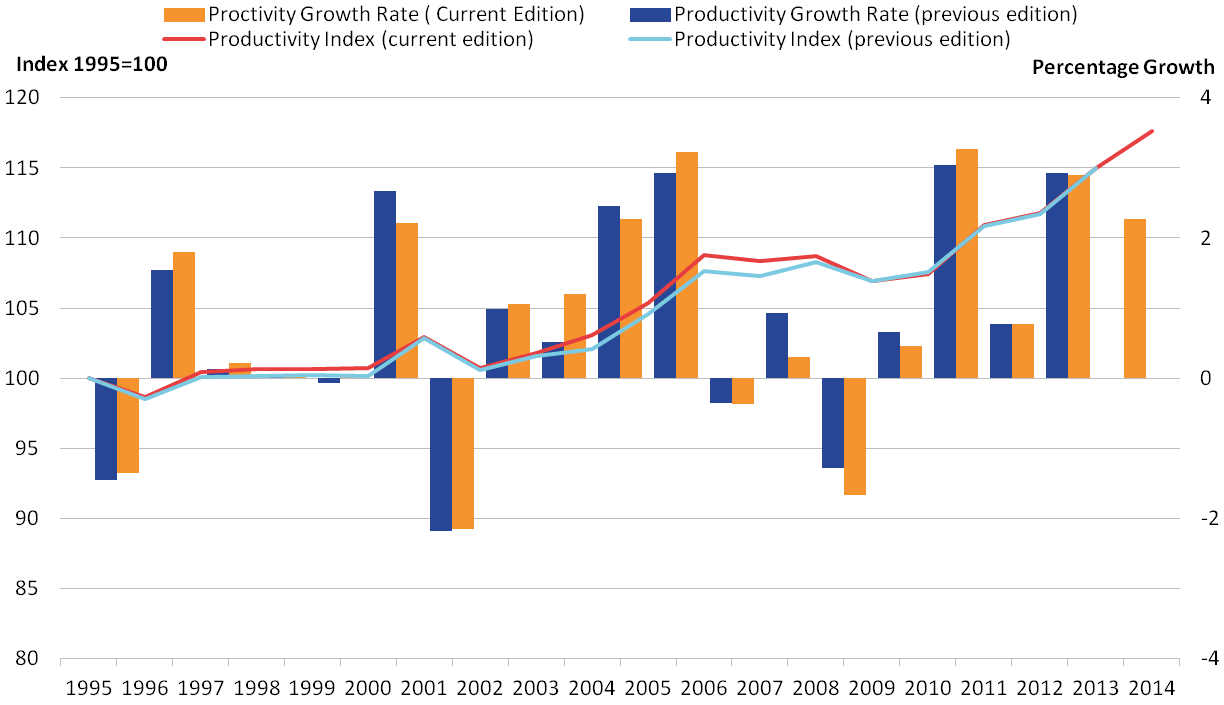 Download this image Figure 6b: Growth rate and index for public service healthcare productivity for current and previous publication, 1995 to 2014

Figure 6a and 6b show that the largest revisions are for 2004 and 2008 (0.7 and negative 0.6 percentage points respectively). The largest upwards revision, which occurred in 2004, is mainly due to negative agency staff and capital consumption growth rates in 2004 reducing total inputs growth and thus increasing productivity growth. The largest downwards revision occurring in 2008 is mainly due to the addition of agency staff expenditure increasing inputs growth and therefore decreasing productivity growth. However, it is also important to note that the incorporation of updated source data will also be partly responsible for the revisions to productivity growth.

Despite changes in the productivity growth rate for some years, these revisions have not led to a change in the average annual growth rate over the period 1995 to 2013, relative to those published in Public service productivity estimates: healthcare, 2013.

More detailed information on methods is available in the healthcare sources and methods paper1.

Notes for: Quality and methodology