Informed by quality assurance prior to publication we would like to draw users’ attention to this note, which provides further information on the particularly large impact of revisions between Quarter 4 (Oct to Dec) 1997 and Quarter 1 (Jan to Mar) 1998, on industry K, which covers the financial and insurance industries.

This release reports labour productivity estimates for Quarter 4 (Oct to Dec) 2018 for the whole economy, the UK regions at NUTS1 level and a range of industries, together with estimates of unit labour costs. Productivity is important as it is considered to be a driver of long-run changes in average living standards.

Following the recent productivity user forum, we are exploring streamlining this release into three separate publications focusing on labour productivity, unit labour costs and regional accounts. We would be interested in users’ views on whether this may be positive, please send us your comments by email to productivity@ons.gov.uk.

The output statistics in this release are consistent with the latest Quarterly national accounts published on 29 March 2019. Note that productivity in this release does not refer to gross domestic product (GDP) per person, which is a measure that includes people who are not in employment. Regional productivity figures presented in this release use the unbalanced income measure of current price gross value added and are consistent with the Regional GVA NUTS1 published on 10 December 2018.

The labour input measures used in this release are consistent with the latest labour market statistics, as described further in the Quality and methodology section of this bulletin.

Compared with the same quarter a year ago, labour productivity, on an output per hour basis, fell by 0.1% and has decreased for a second consecutive quarter.

A 0.1% decline compared with the same quarter in the previous year represents a continuation of the UK's “productivity puzzle”, with productivity since the economic downturn in 2008 growing more slowly than during the long period prior to downturn. This sustained stagnation contrasts with patterns following previous UK economic downturns, when productivity initially fell, but subsequently recovered to the previous trend rate of growth.

There is wide and varied economic debate regarding the causes of this puzzle and further analysis of recent UK productivity trends can be found in the January 2016, May 2016 and June 2016 Economic Reviews, as well as in several standalone articles including:

Figure 1: Productivity, as measured by output per hour, was 18.3% beneath its pre-downturn trend

Download this chart Figure 1: Productivity, as measured by output per hour, was 18.3% beneath its pre-downturn trend

Non-financial services were the main positive contributor to productivity growth over this period, partly offset by negative contributions from non-manufacturing production and finance. The negative allocation effect – suggesting that nominal output and labour have been moving away from higher to lower productivity industries in recent years – includes the falling share of output in mining and quarrying, which has among the highest levels of productivity of UK industry. This is partially a result of the falling reserves of oil and gas in the North Sea. Although negative for the period as a whole, the allocation effect was initially positive following the downturn, but turned negative in recent years.

Figure 2: Non-financial services has been the largest positive contributor to whole economy output per hour growth since Quarter 1 (Jan to Mar) 2008

Download this chart Figure 2: Non-financial services has been the largest positive contributor to whole economy output per hour growth since Quarter 1 (Jan to Mar) 2008

Figure 3 shows longer-term trends for output per hour and its components since Quarter 1 (Jan to Mar) 2007. Services are shown in the left-hand panel, while manufacturing is shown in the right-hand panel. Manufacturing output per hour has been more volatile than services in recent years. This reflects a degree of divergence in manufacturing between gross value added (GVA) and hours, most noticeable in 2009 and between 2011 to 2012, whereas in services, GVA and hours follow similar trends.

Figure 3: Output per hour for services and manufacturing are above their Q1 2007 levels, by 5.6% and 8.9% respectively 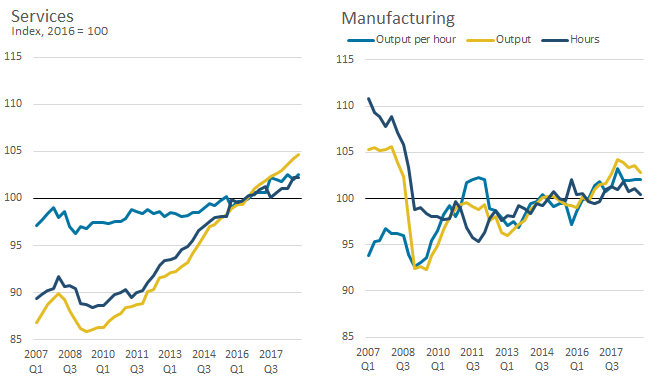 Download this image Figure 3: Output per hour for services and manufacturing are above their Q1 2007 levels, by 5.6% and 8.9% respectively

Unit labour costs (ULCs) reflect the full labour costs incurred in the production of a unit of economic output, including social security and employers’ pension contributions. Changes in labour costs are a large factor in overall changes in the cost of production. If increased costs are not reflected in increased output, for instance, this can put upward pressure on the prices of goods and services – sometimes referred to as “inflationary pressure”. ULCs grew by 3.1% in Quarter 4 (Oct to Dec) 2018, compared with a year ago, reflecting a larger percentage increase in labour costs per hour than output per hour.

While quarter-on-year growth in ULCs has been broadly positive since the onset of the economic downturn, averaging around 1.6% since Quarter 1 2008, there has been substantial variation during this period. During the recent economic downturn, ULCs began to grow at a relatively high rate, reaching a peak of 6.3% by the end of the downturn in Quarter 2 (Apr to June) 2009 and remaining positive until Quarter 2 2010.

Figure 4 shows that the initial increase in ULC growth during the downturn was driven by falling output per hour, but from Quarter 2 2009 onwards, increasing labour costs per hour were the driving factor. Following the downturn, growth in ULCs began to slow, eventually becoming negative in Quarter 2 2010.

Figure 4: Whole economy unit labour costs increased by 3.1% compared with the same quarter a year ago

Download this chart Figure 4: Whole economy unit labour costs increased by 3.1% compared with the same quarter a year ago

Since Quarter 4 (Oct to Dec) 2015, quarter-on-year ago growth rate in sectional unit labour costs for the whole economy have averaged 1.9%, with manufacturing and services averaging 2% each, and production averaging 2.2%. The average whole economy growth is affected by the allocation effect, as well as the growths of its three components. The allocation effect represents the effect of labour and other inputs moving between different sectors of the economy with different unit labour costs.

Figure 5: Production has averaged the highest quarter on year growth since Quarter 4 2015

Download this chart Figure 5: Production has averaged the highest quarter on year growth since Quarter 4 2015

In 2017, productivity measured in output per hour varied significantly across the regions, with London and the South East being 30.4% and 7.1% respectively above the UK, while Wales and Northern Ireland were 16.3% and 16% below the UK, respectively.

Figure 6 shows output per hour by region compared with the UK.

Figure 6: London and the South East were the only regions above the UK output per hour average

Download this chart Figure 6: London and the South East were the only regions above the UK output per hour average

In October 2018, the Office for National Statistics (ONS) informed users we were pausing production of estimates of international comparisons of UK productivity (ICP), due to an ongoing review of the methodology. In December 2018, the Organisation for Economic Co-operation and Development (OECD) published a working paper, International productivity gaps: Are labour input measures comparable?, which showed that the methodologies, data sources and adjustments used to estimate labour inputs varied significantly across countries. The ONS subsequently published an article exploring these differences and the impact they had on our ICP statistics. We continue to explore how best to re-commence this series.

Lastly, we publish a range of Public service productivity measures and related articles. These measures define productivity differently from that used in our labour productivity and MFP estimates. Further information can be found in the Economic and Labour Market Review, No. 5, May 2010 and in an information note published on 4 June 2015.

Revisions to labour inputs result from the Labour market statistics affecting the time periods since Quarter 3 (July to Sept) 2011, which have taken on board the latest population estimates in the Labour Force Survey and from a review of the seasonal adjustment process. In addition, a boost to the Northern Ireland Labour Force Survey sample will have caused some minor revisions to estimates derived from that survey from the November 2017 to January 2018 period.

Unit labour costs incorporated revisions to average weekly earnings (AWE) in January 2019 due to incorporating Average Survey of Hours and Earnings (ASHE) data on small firms and a seasonal adjustment review. Further information is published in this article.

In this release we will not be presenting the experimental industry by region productivity statistics as these annual estimates were published in February 2019.

Industry estimates of average hours derived in this process differ from published estimates (found in Table HOUR03 in the Labour market overview release), as the HOUR03 estimates are calculated by allocating all hours worked to the industry of main employment, whereas the productivity hours system takes account of hours worked in first and second jobs by industry.