Includes estimates of output, inputs and productivity for public service healthcare in the UK between 1995 and 2016.

This article introduces the concepts of productivity, gives an overview of the trends in UK public service healthcare productivity between 1995 and 2016, and provides more detail on composition of the output and input measures used in calculating productivity1.

Whilst these productivity estimates provide a measure of the amount of output that is produced for each unit of input, they do not measure value for money or the wider performance of public healthcare services. They do not indicate, for example, whether the inputs have been purchased at the lowest possible cost, or whether the desired outcomes are achieved through the output provided.

It should be noted that while the output data are also shared with the UK National Accounts, differences will arise from Office for National Statistics (ONS) public service productivity estimates operating an open revisions policy. This means that new data or improved methods can be incorporated with each release of the public service productivity articles and can be implemented for the entire time series of data. Revisions that have been made to this data will be incorporated in the UK National Accounts in the 2019 Blue Book.

Healthcare inputs are the resources available to produce healthcare services and are also measured on a quantity basis. Inputs comprise labour, goods and services, and consumption of fixed capital. The quantity, or volume, basis is used for measuring healthcare inputs to prevent inflation in input costs showing up as an apparent increase in the input resources available to the health service.

Further information on methods, including information about data used for the different constituent countries of the UK and how these are aggregated to form a UK index, is available in our sources and methods paper (PDF, 328.65KB). 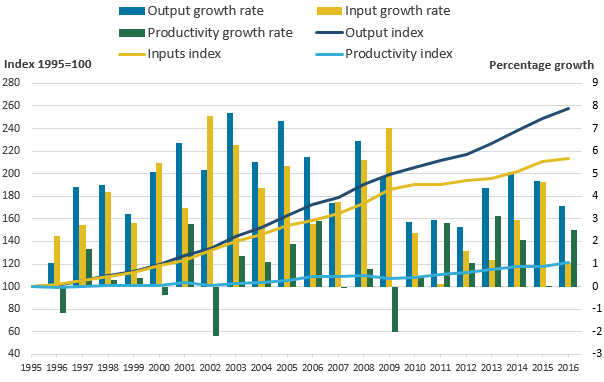 Inputs in the public service healthcare productivity measure are broken down into three components:

Estimates of labour inputs are based on direct measurement of the change in the number of full-time equivalent employees of the health service, weighted by their average earnings. Inputs for goods and services are estimated indirectly, by adjusting expenditure for each sub-component using appropriate measures of inflation, known as deflators. This removes the effects of price changes from current price expenditure and so produces a quantity input measure. Capital consumption is measured using the perpetual inventory method, as used in the UK National Accounts.

Figure 2a shows the growth rate for the two main inputs components before it is weighted by expenditure share. Figure 2b presents this information after weighting, showing how growth in each component contributes to the growth in overall inputs. These charts show that the rate of growth of total inputs slowed distinctly in 2016, growing at a rate of 1.0%, down from 4.6% the previous year.

The slower growth in goods and services inputs had four main causes:

Analysing these four causes in turn; firstly, growth in purchases of care from non-NHS providers slowed markedly in 2016 to 7.3%, following exceptionally strong growth in 2015 of 18.1%. As a lack of activity data for non-NHS services prevents the construction of direct measures of output, output for non-NHS services is estimated to be equal to inputs. Therefore, slower growth in non-NHS services in inputs will have an equivalent effect on output and this component will have minimal impact on the change in productivity in any given year.

Thirdly, there was a slowdown in the growth in NHS intermediate consumption expenditure, the largest component of goods and services inputs. This category includes clinical supplies and services, which fell in England in the final year of the series.

However, overall input growth remained positive due to an increase in labour inputs, which grew by 1.6% in 2016, a similar rate to the previous two years, driven by an increase in a range of staff groups, including consultants. It should be noted that the labour data that we use do not include bank staff, who work flexible hours and are typically used as an alternative to agency staff contracted from private staffing agencies. Therefore, it is possible that the combination of the aforementioned agency staff pay cap and an NHS Professionals campaign, launched in 2016, to encourage nurses to join staff banks, may have increased total staff inputs by more than the data used in this series can measure.

Healthcare output is measured as the quantity of healthcare delivered adjusted for changes in the quality of delivery. The quantity measure of output is estimated using a cost-weighted activity index and can alternatively be described as volume output. To produce the cost-weighted activity index, the growth rates for thousands of individual healthcare activities are calculated and then weighted by their proportion of total expenditure. As a result, growth in treatments that are high-volume and expensive has a greater effect on the output index than a similar rate of growth in treatments that are uncommon and low-cost.

The quantity of healthcare is estimated separately for each of the following sectors, which are weighted together to produce an overall quantity output series:

Figure 3a shows the quantity output growth by component before it is weighted by expenditure share. Figure 3b presents this information after weighting each of the four components together to show how much growth in each component contributes to the growth in overall output quantity.

Figure 3b shows the fall in quantity output in 2016 was mainly due to a slowdown in the growth of output from non-NHS providers. Due to a lack of activity data, the output for non-NHS services is assumed to be equal to inputs and so changes in growth in this element has minimal effect on productivity.

In recent years, the largest contribution of the four output components to healthcare output growth has come from hospital and community health services (HCHS), the category which accounts for the majority of healthcare expenditure. Growth in HCHS output in 2016 was 2.9%, down only marginally from 2015 when this component grew by 3.0%.

Growth in the quantity of healthcare provided should be seen in the context of healthcare demand and its drivers. One of these drivers is an ageing population: while the total UK population grew at an annual average rate of 0.6% over the period 1995 to 2016, the population aged 75 years and over grew at 1.4%. However, research by bodies such as the Organisation for Economic Co-operation and Development suggests that demographic effects, such as a larger population and an increasing number of people aged 75 years and over, have a relatively small impact on healthcare expenditure and output growth. Factors such as medical advances, healthcare institutions and public expectations are viewed as more significant factors in explaining increases in healthcare expenditure over time (see Public spending on health and long-term care: a new set of projections for more information).

In line with the recommendations of the Atkinson Review (PDF, 1.08MB), a quality adjustment is applied to the estimate of healthcare quantity output1. The adjustment reflects two dimensions of quality.

For hospital and community health services (HCHS), this is measured using short-term survival rates2 and health gain following treatment in hospital and changes in waiting times. For primary care, this is measured with a selection of measures from the general practitioner (GP) quality and outcomes framework, including measures for the percentage of certain groups of patients meeting target ranges for blood pressure.

The extent to which the service is responsive to users’ needs 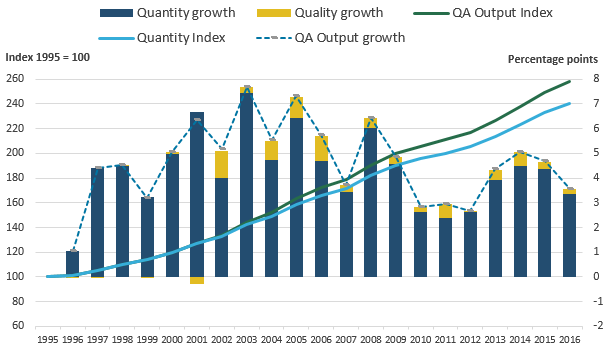 Effect of quality adjustment on productivity 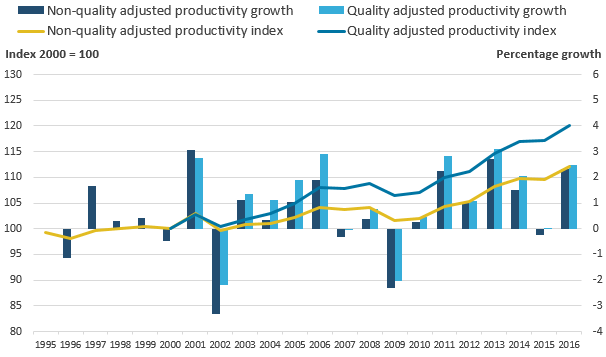 Figure 6 shows the effect of the revisions on the growth rate of productivity. The revisions largely apply to the period from 2010 to 2015. They largely result from:

No revision to productivity in 2015 is observed due to offsetting revisions in inputs and output. 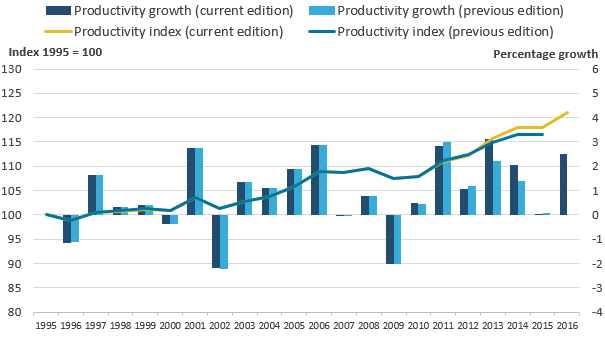 Other Office for National Statistics (ONS) output and productivity measures

It is important to recognise that the productivity statistics published in this article are based on a concept of output as measured by government consumption expenditure rather than government or state production. This follows from the submission of the estimates of the volume of government output that are used in this article (prior to any quality adjustment) to the gross domestic product (expenditure) (GDP (E)) side of the UK National Accounts. This means that we are using a measure of government-purchased output, regardless of what type of business unit produced the output. As with other aspects of the methodology employed in producing these statistics, this approach is consistent with that recommended by the Atkinson Review (PDF, 1.08MB).

In the case of healthcare, although most expenditure is used to fund state providers of healthcare services and its administration, there is a growing component of expenditure on private and third sector-provided healthcare services. This is included within government output in our articles, even though it is provided by business units that are classified as private businesses or non-profit institutions serving households (NPISH) in the UK National Accounts, and this is why the term “public service” is used instead of “public sector”.

Traditional measures of private sector or whole-economy productivity, including those published by Office for National Statistics (ONS), use a supply or production framework. These measures of productivity use Standard Industrial Classification (SIC 2007) categories of production as the measure of output and are on a gross value added (GVA) basis. Input measures count the labour (jobs or hours) used in the production of these goods and services to estimate labour productivity series such as those produced by ONS. We also produce Experimental Statistics on market sector multi-factor productivity, which include labour and capital services as inputs.

The interpretation of the expenditure-based productivity estimates presented in this article should therefore be taken as a measure of the productivity of government-funded healthcare services for individuals in the UK (from whatever type of business unit), and not necessarily government-provided services. Caution should be used when considering the differences between productivity measures published using the expenditure approach (which will include services purchased by government from the independent sector) and those using the traditional production approach (which will only include government-produced services).

More information on the difference between these two approaches is available in a paper we published in June 2015: Comparing public service productivity estimates.

Other healthcare output and productivity measures

For example, the productivity growth rate in the England ONS series of 0.6% in financial year ending (FYE) 2016 differs from the zero growth in the University of York series, while the average productivity growth rate over the period between FYE 2005 and FYE 2016 was 1.3% in the ONS series and 1.2% in the University of York series.

These differences arise from a number of differences in the source data used in the two publications including:

The authors of this article are Narcisa Florea and James Lewis. The authors would like to thank Adriana Castelli, James Gaughan and Idaira Rodriguez Santana from the University of York for the provision of quality adjustment data and comments, and Sharon Allen, Alastair Brodlie, Julie Broughton, James Gordon, Barry McEvory, John Morris, Paudric Osborne, Bethan Sherwood and Joel Solway for the provision of output and input data and comments.

More detailed information on methods is available in the healthcare sources and methods paper (PDF, 328.65KB).