In delivering quarterly multi-factor productivity alongside labour productivity and public service productivity, a main issue for users is how these different estimates relate to one another, and importantly where they differ.

Experimental multi-factor productivity estimates are only calculated for the market sector due to challenges in measuring inputs and output in the non-market sector. Growth accounting de-composes the growth in market sector output per hour into that attributable to changes in: labour composition (the skills of the workforce), capital deepening (capital per hour worked) and multi-factor productivity (a residual, encompassing spillovers, and improvements in technology).

Table 1 shows the growth in labour productivity in Quarter 2 (Apr to June) 2018 on the same quarter a year ago, and decomposes it into the market1 and non-market sector components.

Download this table Table 1: UK labour productivity by sector of the economy

However, public service productivity estimates, as published alongside this release, are different to those for the non-market sector in Table 1. Public service productivity in Quarter 2 2018 decreased by 0.8% compared with the same quarter a year ago; this is different from the non-market sector, which we can infer declined by approximately 0.6% over the same period. Can both be right?

There are a number of main differences between public service productivity and the productivity of the non-market sector that explain this, which are detailed in an information note (PDF, 434KB) and are summarised in the rest of this section.

The non-market sector includes other parts of the economy outside the public services, notably the non-profit institutions serving households (NPISH) sector. This is made up of non-profit institutions that are not mainly financed and controlled by government and that provide goods or services to households for free or at prices that are not economically significant. Examples include churches and religious societies, sports and other clubs, trade unions and political parties.

Finally, the quarterly estimate of public service productivity is calculated more rapidly than the National Statistic annual public service productivity estimates, using a simplified methodology. The National Statistic is calculated in line with the principles outlined in the Atkinson Review (PDF, 1.07MB), which noted that public service outputs (such as the number of students taught in schools) should be adjusted in line with the change in outcomes that could be attributed to those services (for instance, if pupils achieve better results in their exams, this increases volumes; whereas if they get poorer results, volumes decrease).

Data for these outcomes can be slow to collect, or defined over a long period, so the simplified quarterly method takes the last published quality adjustment and applies this for each quarter until it is revised for the next annual National Statistic. This adjustment is, however, only applied to our public service productivity estimates. Unadjusted public service outputs are still used in the national accounts, which is our data source for our labour productivity statistics, in line with international standards in the European System of Accounts 2010. The fact that quality adjustments are applied to public service productivity, but not labour productivity or multi-factor productivity estimates means these measures cannot be directly compared.

We intend to provide further detail on the differences between our productivity measures in the future.

Notes for: Understanding the different measures

Labour productivity grew by 1.4% in Quarter 2 (Apr to June) 2018 compared with the same quarter a year ago, reflecting higher output growth (1.2%) coupled with lower growth in jobs (0.9%) and a decline in total hours worked. This is the seventh consecutive quarter that labour productivity has grown, but this remains below the rate of growth experienced prior to the downturn, which averaged around 2%.

Compared with the previous quarter, output per hour worked grew by 0.5%, reflecting higher output growth (0.4%) compared with growth in jobs (0.1%), along with a slowdown in total hours worked (−0.1%).

Since July 2017, we have been publishing an experimental dataset of industry-by-region labour productivity estimates, disaggregating the whole economy into 16 industrial sections, and 12 regions of the UK based on the Nomenclature of Units for Territorial Statistics (NUTS1). The dataset includes estimates of output per hour, output per worker, productivity hours and productivity jobs.

Figure 2: Output per hour (current prices) for each region in the UK, 2016 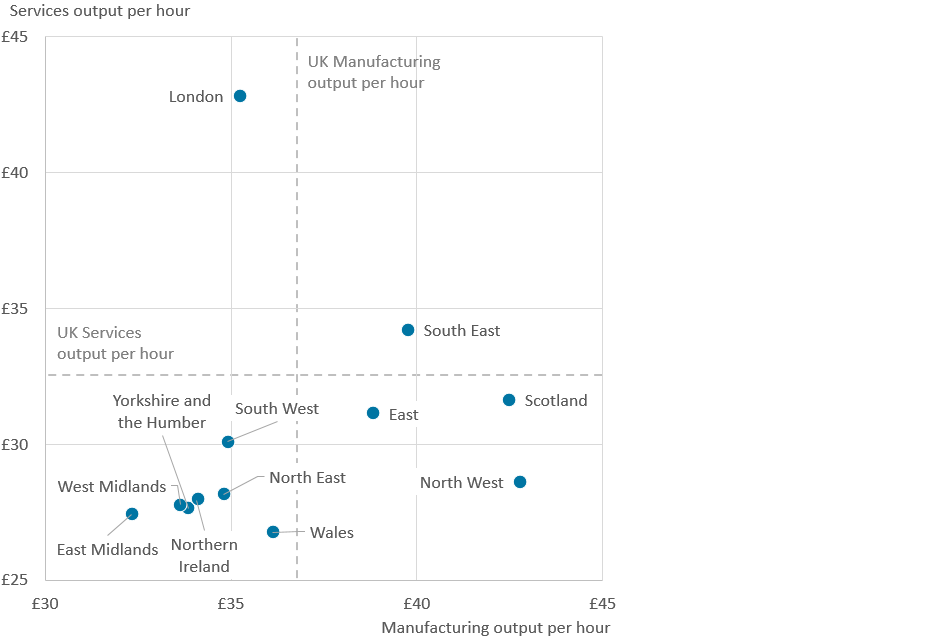 Download this image Figure 2: Output per hour (current prices) for each region in the UK, 2016

Included in this release is the first in our new series of timely, quarterly estimates of multi-factor productivity (MFP), now published on the same timetable as our labour productivity estimates at approximately 95 days after the end of the reference period. As far as we are aware, these are the only quarterly MFP statistics published by any National Statistical Institute (NSI) in the world. This, along with other developments to Office for National Statistics’ (ONS’s) Growth Accounting suite of statistics, follows a main finding of the Bean Review and the review of international best practice in the production of productivity statistics.

Estimates of MFP augment our labour productivity estimates by taking account of movements in productive capital (such as machinery and software) and compositional developments in the labour market (for example, an increase in the number of workers with university degrees) as well as hours worked. We have also published a new simple guide to MFP.

Figure 3 decomposes cumulative quarterly growth of market sector output per hour worked since Quarter 1 (Jan to Mar) 2008 into contributions from capital deepening (capital per hour worked) and labour composition (the skills make-up of the workforce), and the residual MFP contribution. Labour productivity in the market sector grew by 1.7% in the year to Quarter 2 (Apr to June) 2018, which is explained by improvements in MFP (0.8%), capital deepening (0.8%) and labour composition (0.1%).

Although quarterly movements in these experimental statistics should not be over-interpreted, Figure 3 highlights the prolonged weakness of market sector labour productivity since the financial crisis. More than 10 years on, labour productivity per hour worked is only just ahead of its level in 2008. MFP is still some 4 percentage points lower than in 2008, having grown only slowly and intermittently since 2009, compared with trend growth in MFP of around 1% per year prior to the economic downturn (Figure 4). Capital deepening has also been exceptionally weak by historic standards, reflecting sluggish growth in investment relative to hours worked. On the other hand, labour composition has steadily improved over the last 10 years.

Figure 3: Decomposition of cumulative quarterly growth of output per hour worked, Quarter 1 (Jan to Mar) 2008 to Quarter 2 (Apr to June) 2018

Download this chart Figure 3: Decomposition of cumulative quarterly growth of output per hour worked, Quarter 1 (Jan to Mar) 2008 to Quarter 2 (Apr to June) 2018

Figure 4 highlights the structural break at the time of the economic downturn in 2008, where capital deepening stopped growing and MFP demonstrated a level-shift downwards. Slow growth from labour composition and MFP since then have so far failed to reverse this change.

Further information, including MFP breakdowns for 10 component industries, longer runs of annual data and supporting data on capital and labour composition, is available in the datasets published alongside the quarterly MFP article.

Figure 4: Decomposition of cumulative quarterly growth of output per hour worked, Quarter 1 (Jan to Mar) 1994 to Quarter 2 (Apr to June) 2018

Download this chart Figure 4: Decomposition of cumulative quarterly growth of output per hour worked, Quarter 1 (Jan to Mar) 1994 to Quarter 2 (Apr to June) 2018

As shown in Figure 5, this most recent contraction more than offset gains experienced in 2016 and 2017, although the experimental quarterly series is noticeably volatile. As a result, total UK public service productivity is now marginally lower than what it was in 2015.

We have also published new firm-level analysis combining the Annual Business Survey (ABS) with data from the E-commerce Survey to explore the relationship between the use of technologies and productivity. While adoption rates of basic information and communication technologies (ICT) (such as use of computers and access to the internet) are near saturation, more sophisticated technologies are less utilised and may be drivers of variation of productivity outcomes across businesses. To analyse the impact of ICT use on productivity, we construct three indicators of ICT use:

For the businesses in the linked sample, which is skewed towards large businesses1, e-purchase is by far the most common type of e-commerce activity; this is true across production and services industries. In general, we find a significant productivity premium for engaging in e-purchases of around 10%, but the relationship between productivity and web-sales or EDI sales is weaker. However, the intensity with which businesses use web-sales and EDI sales is also correlated with productivity – the more sales they conduct through these channels, relative to more traditional channels, the more productive they are likely to be. All these effects are present for businesses in production and services industries, but are mostly found in businesses with higher levels of employment.

The use of all types of business organisation technologies in our measures are associated with a productivity premium of around 10%. A large share (24%) of businesses in our sample do not use any of these technologies to organise their business activities, but of those that do, CRM and ERP are the most common. The use of software for ERP is associated with the strongest productivity premium and businesses that use software for CRM and/or SCM as well tend to be even more productive. These findings mainly hold for businesses in the services industries.

Notes for: ICT use and productivity

Finally, this is your opportunity to let us know your thoughts on our plans for future improvements and analysis on productivity statistics. Responses can be sent via email to productivity@ons.gov.uk.