This article provides analysis specific to public service healthcare productivity for England on a financial year basis. This additional analysis is included to provide a measure more comparable with other data available on the health service in England.

This article provides analysis specific to public service healthcare productivity for England and on a financial year basis. This additional analysis is included to provide a measure more comparable with other data available on the health service in England. Released alongside this article is a larger healthcare productivity article produced on the traditional UK calendar year basis with more detail on how the measure is produced, as well as the annual UK total public service productivity estimates:

This article gives an overview of the drivers of change in public service healthcare productivity in England in financial year ending (FYE) 2017 and analyses changes in inputs and output over the course of the series FYE 1996 to FYE 2017.

The methodological basis for these statistics is the same as for the UK publication and the data used are largely those used to produce the inputs and output for England in the UK measure. More information on the methodology used can be found in Public service productivity: healthcare, UK, 2016, while more information on the similarities and differences between the England and UK measures can be found in Section 7: Comparison of public service productivity estimates for England and the UK.

Inputs in the public service healthcare productivity measure are measured in volume terms and consist of three components:

More information on how inputs are measured can be found in the accompanying publication, Public service productivity: healthcare, UK, 2016.

Goods and services inputs fell for the first time in the series in FYE 2017, while labour inputs continue to grow steadily

Figure 1a shows the growth in the two main components, labour, and goods and services inputs.

Four main factors were behind the fall in goods and services inputs in FYE 2017:

These are the same factors that are behind the fall in goods and services inputs in the UK productivity measure and are discussed in more detail in Section 5 of Public service productivity: healthcare, UK, 2016.

Not all workers in the NHS are included in the labour inputs measure. Agency staff are included in the goods and services element of inputs as agency workers are not employees of the health service and no direct measures of agency staff numbers exist. Expenditure on agency workers fell in FYE 2017 after four consecutive years of growth. This fall followed the introduction of a cost-per-hour cap on agency staff introduced in the English NHS in November 2015 and extended to all staff categories in April 2016.

Due to data limitations, bank staff, who work flexible hours and are typically used as an alternative to agency staff contracted from private staffing agencies, are excluded entirely from the inputs measure. It is possible that the combination of the aforementioned agency staff pay cap and an NHS Professionals campaign, launched in 2016, to encourage nurses to join staff banks, may have increased total staff inputs by more than the data used in this publication can measure.

In FYE 2017, healthcare inputs growth slowed due to the fall in goods and services inputs. Figure 1b shows the contribution to the overall growth rate made by each of the three inputs components. 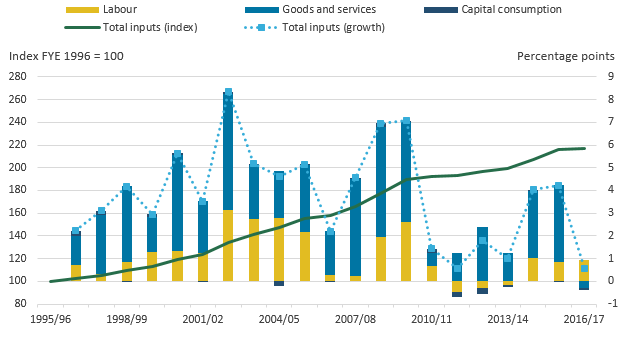 Figure 1b shows that inputs grew by only 0.6% in FYE 2017. This was as a result of the first fall in goods and services inputs in the series, although overall inputs growth was still positive due to the positive contribution of labour inputs more than offsetting the negative contribution of goods and services inputs. Capital consumption also reduced inputs growth in FYE 2017 although its effect was relatively small due to its small share of expenditure.

Over this period, goods and services inputs contributed the largest share of inputs growth. This is in part due to two elements that are also included in output, and so have a minimal effect on productivity. These elements are: non-NHS provision, which is included on this basis due to the absence of activity data, and General Practitioner (GP)-prescribed drugs, which are simultaneously considered both an input and an output. These series also recorded faster growth than other output elements over the period and more analysis on these is available in Section 5 on Output.

Healthcare output is measured as the quantity of healthcare provided, adjusted for the quality of delivery. Quantity output is estimated using a cost-weighted activity index, where the growth rates of individual activity types are weighted by the share of expenditure that activity type accounts for. Due to this approach, growth in treatments that are high volume and expensive has a greater effect on overall output than a similar rate of growth in treatments that are uncommon or low cost. A quantity of healthcare is estimated for each of the following sectors:

A quality adjustment reflecting the extent to which the service succeeds in delivering its intended outcomes and the extent to which the service is responsive to users’ needs, is applied to the estimate of healthcare quantity output. More information on the methodology used to measure healthcare output can be found in the accompanying article, Public service productivity: healthcare, UK, 2016.

Growth in HCHS increased from 2.9% in financial year ending (FYE) 2016 to 3.6% in FYE 2017, matching the average of the entire series. This stronger growth was due to increases in a range of activity types, with an increase in outpatient consultations a substantial factor. However, the largest area of HCHS activity by expenditure, inpatient activity, grew at a similar rate in FYE 2016 and FYE 2017, with a small increase in non-elective activity growth and a small decrease in elective activity growth largely cancelling each other out.

Figure 2a shows that publicly funded healthcare output from non-NHS providers grew by 2.8% in FYE 2017, the slowest growth in this component since FYE 2000. This followed exceptionally strong growth in this component in FYE 2016 of 17.3%. Non-NHS provision has seen faster growth in earlier years in the series, although it should be noted that earlier in the series non-NHS provision accounted for a relatively small share of expenditure and so the very high growth rates seen for non-NHS provision in FYE 1998 and FYE 2004 do not necessarily translate into exceptionally large absolute increases in healthcare output.

As many of the services provided by non-NHS providers, such as community health services and routine day case procedures, are also carried out by NHS providers, it may be that there is a correlation between faster growth in NHS-provided HCHS services and slower growth in non-NHS services. In this case, the relative growth rates of each component will partly depend on changes in the proportion of such treatment carried out by NHS and non-NHS providers. However, an absence of detailed data on the services provided by non-NHS providers limits the opportunity for further analysis of this component.

For the final components of output, GP-prescribed drugs grew at 5.8% in FYE 2017, slightly faster than in the previous year, while Family Health Services grew slightly more slowly in FYE 2017, but remained similar to the trend for recent years. 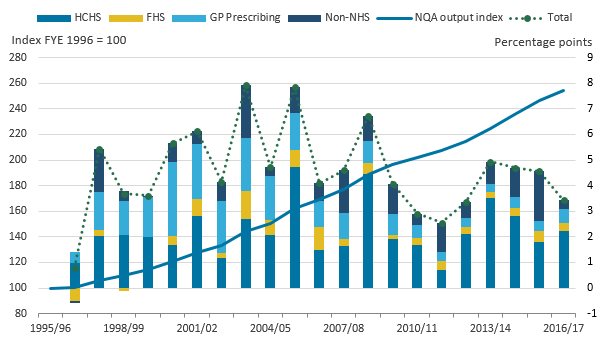 Figure 2b shows this lower growth is due primarily to slower growth in non-NHS output. Figure 2b also shows that just over three-quarters of quantity output growth in FYE 2017 was due to HCHS.

While the lower growth in overall quantity output in FYE 2017 is more similar to the low growth observed during the period FYE 2010 to FYE 2013, growth in HCHS remains higher than in most of this earlier period.

Quantity output growth during the 2010s was lower than during the 2000s, due largely to lower growth in GP-prescribed drugs

Figure 2b displays total growth in output over the series, showing that quantity output was over 2.5 times higher in FYE 2017 than in FYE 1996. 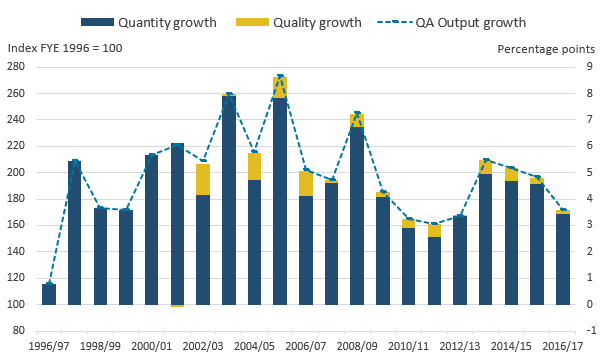 In FYE 2017, productivity growth rebounded to 3.0%, as output growth slowed by less than input growth 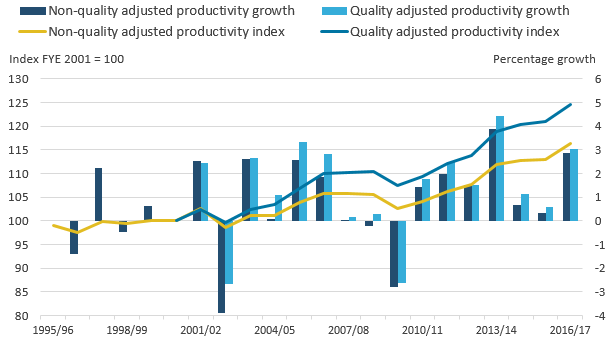 As a result of output growth slowing less than inputs growth, non-quality adjusted productivity grew by 2.9% in FYE 2017. This was higher than the 0.3% growth recorded in FYE 2016 and the average growth rate since FYE 1996 of 0.8%.

Quality-adjusted productivity increased by 25.9% over the series, with most of this increase occurring since FYE 2010

However, this increase was not continuous over the period and there are a few changes in the trend over the series:

Since FYE 2010, the average rate of inputs and output growth have both reduced, but output growth has not decreased as much as inputs growth, resulting in productivity growth in each of the last seven years of the series. While it accounts for only one-third of the period covered by the series, the period from FYE 2010 onwards accounts for two-thirds of the total productivity growth since FYE 1996 for the quality-adjusted measure and an even higher share of growth in the non-quality adjusted measure.

However, to maintain the methodological consistency with the UK productivity estimates, a number of data sources remain unchanged:

Notes for: Comparison of public service healthcare productivity estimates for England and the UK