This release reports labour productivity estimates for Quarter 3 (July to Sept) 2017 for the whole economy and a range of industries, together with estimates of unit labour costs. Productivity is important as it is considered to be a driver of long-run changes in average living standards.

This edition forms part of our quarterly productivity bulletin, which also includes an overarching commentary, quarterly estimates of public service productivity, and articles on productivity-related topics and data.

This release also reports estimates of unit labour costs (ULCs), which capture the full labour costs – including social security and employers’ pension contributions – incurred in the production of a unit of economic output. Labour costs make up around two-thirds of the overall cost of production of UK economic output. Changes in labour costs are therefore a large factor in overall changes in the cost of production. If increases in labour costs are not reflected in the volume of output, this can put upwards pressure on the prices of goods and services, therefore this is a closely watched indicator of inflationary pressure in the economy.

The output statistics in this release are consistent with the latest Quarterly National Accounts published on 22 December 2017. Note that productivity in this release does not refer to gross domestic product (GDP) per person, which is a measure that includes people who are not in employment.

The labour input measures used in this release are consistent with the latest labour market statistics as described further in the Quality and methodology section of this bulletin. Data in this release reflect revisions to GVA and income data incorporated in the latest Quarterly National Accounts. Regional productivity figures presented in this release use the unbalanced income measure of current price gross value added.

The next labour productivity bulletin (released 6 April 2018) will include a number of small methodological changes, previously consulted upon and agreed at a user group held in March 2017. More information on these will be included alongside the next bulletin. In addition, a user group will be held before the next bulletin to consult on additional methodological changes, including a proposed move to the balanced current price measure of GVA in the calculation of regional productivity. If you would like to attend this meeting, please email productivity@ons.gov.uk.

Figure 2 breaks down the growth in productivity between Quarter 1 (Jan to Mar) 2008 and Quarter 3 2017 into contributions from different industry groupings and an “allocation effect” due to changes in the share of output and labour in each grouping. All else being equal, stronger (weaker) productivity growth in any given industry, or a movement of output and labour towards (away from) higher productivity industries will tend to increase (reduce) aggregate productivity growth. Non-financial services are the main positive contributor to productivity growth over this period, partly offset by negative contributions from non-manufacturing production and finance. The negative allocation effect – suggesting that output and labour have been moving away from higher to lower productivity industries in recent years – partly captures the falling share of output in mining and quarrying, which has among the highest levels of productivity of UK industry; partially a result of the falling reserves of oil and gas in the North Sea. Although negative for the period as a whole, the allocation effect was initially positive following the downturn, but turned negative in recent years.

Figure 3 examines longer-term trends, showing output per hour and its components since Quarter 1 (Jan to Mar) 2008. Services are represented in the first panel, while manufacturing is represented in the second. Manufacturing output per hour has been more volatile than services in recent years. This reflects a degree of divergence in manufacturing between gross value added (GVA) and hours, most noticeable in 2009 and 2011 to 2012, whereas in services GVA and hours follow fairly similar trends. 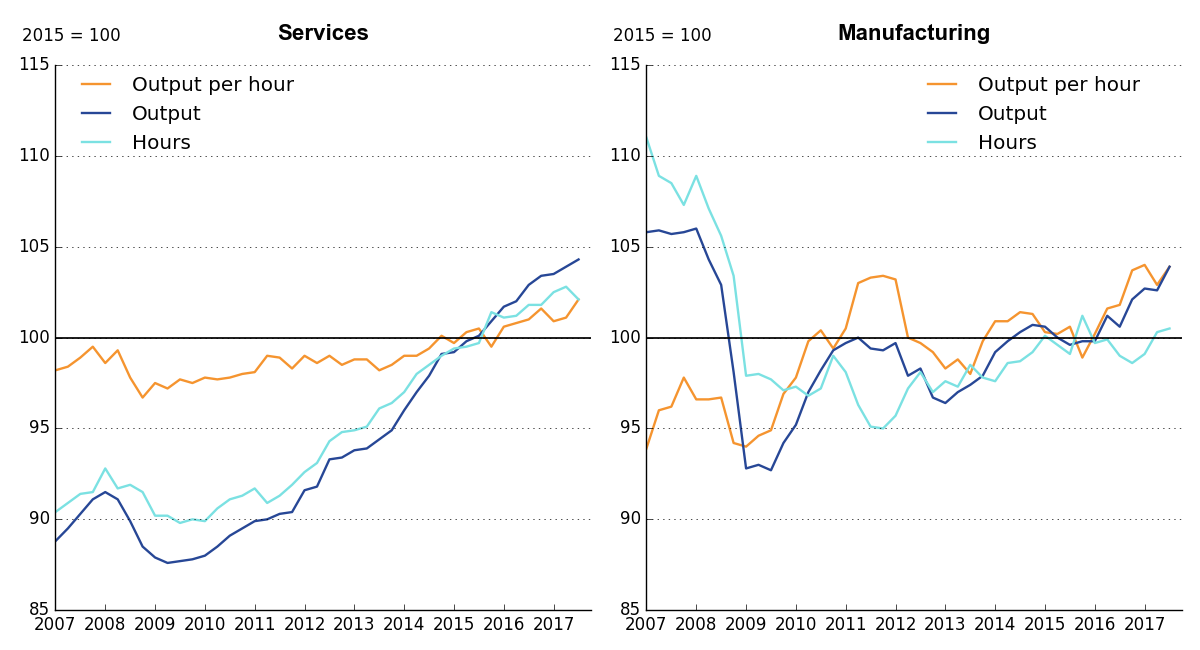 Unit labour costs (ULCs) reflect the full labour costs, including social security and employers’ pension contributions, incurred in the production of a unit of economic output. Changes in labour costs are a large factor in overall changes in the cost of production. If increased costs are not reflected in increased output, for instance, this can put upward pressure on the prices of goods and services – sometimes referred to as “inflationary pressure”. ULCs grew by 1.3% in the year to Quarter 3 (July to Sept) 2017, reflecting a larger percentage increase in labour costs per hour than output per hour. This was the smallest increase in ULCs since Quarter 2 (Apr to June) 2015.

While growth in ULCs has been broadly positive since the onset of the economic downturn, averaging around 1.5% since Quarter 1 2008, there has been substantial variation during this period. During the recent economic downturn, ULCs began to grow at a relative high rate, reaching a peak of 6.0% by the end of the downturn in Quarter 2 2009 and remaining elevated until Quarter 1 2010. Figure 4 shows that the initial increase in ULC growth during the downturn was driven by falling output per hour, but from Quarter 2 2009 onwards, increasing labour costs per hour were the driving factor. Following the downturn, growth in ULCs began to slow, eventually becoming negative in Quarter 4 (Oct to Dec) 2010.

Following a period of low or negative growth, ULCs have grown at around 2% for the past two years. This increase broadly reflects higher hourly labour cost growth, with little offsetting output per hour growth.

Lastly, we publish a range of Public sector productivity measures and related articles. These measures define productivity differently from that used in our labour productivity and MFP estimates. Further information can be found in the Economic and labour market review, No. 5, May 2010 and in an information note published on 4 June 2015.

Most changes which had originally been scheduled for introduction in the current release have been postponed until the next release, to allow more time for quality assurance. The removal of rounding in the processing of market sector data has been implemented in this release.

The measure of output used in these statistics is the chain volume (real) measure of gross value added (GVA) at basic prices, with the exception of the regional analysis in Table 9, where the output measure is unbalanced nominal GVA (NGVA), using the income approach. These measures differ because NGVA is not adjusted to account for price changes; this means that if prices were to rise more quickly in one region than the others, then the measures of productivity for that region could show relative growth in productivity compared to other regions purely as a result of the price changes.

Labour input measures used in this bulletin are known as “productivity jobs” and “productivity hours”. Productivity jobs differ from the workforce jobs (WFJ) estimates, published in Table 6 of our labour market statistical bulletin, in three ways:

Industry estimates of average hours derived in this process differ from published estimates (found in Table HOUR03 in the labour market statistics release), as the HOUR03 estimates are calculated by allocating all hours worked to the industry of main employment, whereas the productivity hours system takes account of hours worked in first and second jobs by industry.

A research note, Sources of revisions to labour productivity estimates, is available, and further commentary on the nature and sources of the revisions introduced in this quarter is available in the UK Productivity Bulletin – Introduction.