“We have a new measure of the quality of services delivered by the criminal justice system, which allows us better to estimate productivity in this sector. These new figures should help support improved understanding and debate on the importance of efforts to tackle re-offending, speed cases through court and improve safety in prisons on the outcomes observed by the public. This improvement marks an important step in our transformation of productivity figures.”

“Overall, public sector productivity grew 0.2% in 2015. This is the sixth successive year of improving productivity and marks the longest consecutive period of productivity growth for total public services since comparable records began.” 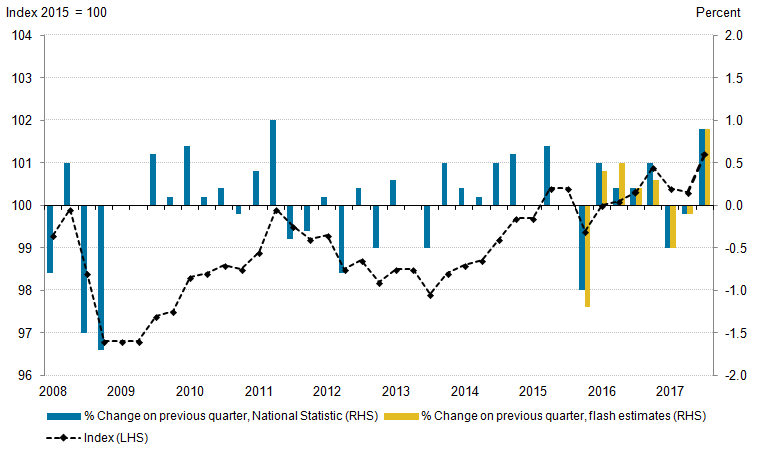 Growth in labour productivity over the year to Quarter 3 2017 was supported by output per hour growth in manufacturing (2.1%), financial services (4.7%) and non-financial services (1.0%), although output per hour continued to decline in non-manufacturing production (negative 6.0%) and was flat in construction. Of these, non-financial services made the largest contribution to the growth of labour productivity over the last year – accounting for 0.7 percentage points of whole economy growth since Quarter 3 2016 (Figure 2). At the more detailed level, this growth was largely accounted for by relatively strong labour productivity growth in business services (5.9% higher over the same period). Changes in the overall composition of the UK economy – reflecting movements of labour between industries with different levels of output per hour – also weighed on growth over this period, although this effect has lessened over the last year.

Figure 2: Contributions to the growth of output per hour over the year to Quarter 3 (July to Sept) 2017, UK

Download this chart Figure 2: Contributions to the growth of output per hour over the year to Quarter 3 (July to Sept) 2017, UK

While the growth of labour productivity in Quarter 3 2017 is a welcome break from the UK’s recent experience, the average rate of productivity growth since the economic downturn has been strikingly weak. Figure 3 shows average quarterly growth in output per hour worked for the whole economy and its main industrial groupings. In this figure, the bars show the average quarterly rate of productivity growth over the decade prior to the economic downturn, while the points show the equivalent average growth rates for the period since the trough of labour productivity in Quarter 4 (Oct to Dec) 2008, and over the last year.

Comparing the pre- and post-downturn periods, output per hour growth was weaker in all but one industry – construction – over this period. Labour productivity in manufacturing, which grew by more than 1.0% per quarter on average before the downturn, grew by just 0.3% per quarter on average between Quarter 4 2008 and Quarter 3 2017. Finance and insurance productivity growth also fell markedly, while falls in output per hour growth for non-financial services were more modest.

Although labour productivity growth over recent quarters may have strengthened, Figure 3 also indicates that the current rates of growth remain lower than the pre-downturn period for many industries. In manufacturing, the rate of output per hour growth in the year to Quarter 3 2017 was half that of its pre-downturn average; in non-financial services the current rate of growth is little changed from the average since 2008, while for construction the weak productivity growth of the pre-downturn period has resumed. At this level of aggregation, only finance and insurance output per hour growth has been above its pre-downturn average. At a more detailed level, only 9 of the 26 industries for which the Office for National Statistics (ONS) publishes headline measures of output per hour have grown at faster rates over the last year than in the decade prior to the economic downturn.

Taken together, these trends mean that the UK’s post-downturn productivity performance has been among the slowest decades of productivity growth since official records began. Figure 4 uses ONS’s official labour productivity series, combined with information from the Bank of England’s “Millennium of Macroeconomic Data”, to show the UK’s rolling 10-year compound average annual rate of output per hour worked growth since 1770. It indicates that growth over the preceding 10 years was 0.15%, 0.13% and 0.18% respectively in the first three quarters of 2017 - amongst the weakest rates since official records began in 1971. On this combined, longer-term record, output per worker growth over a 10-year period has been weaker in recent quarters than at any point since the early-1820s. 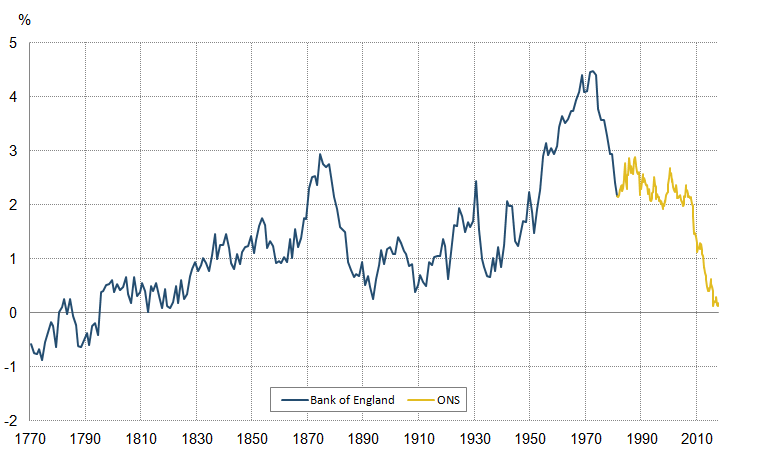 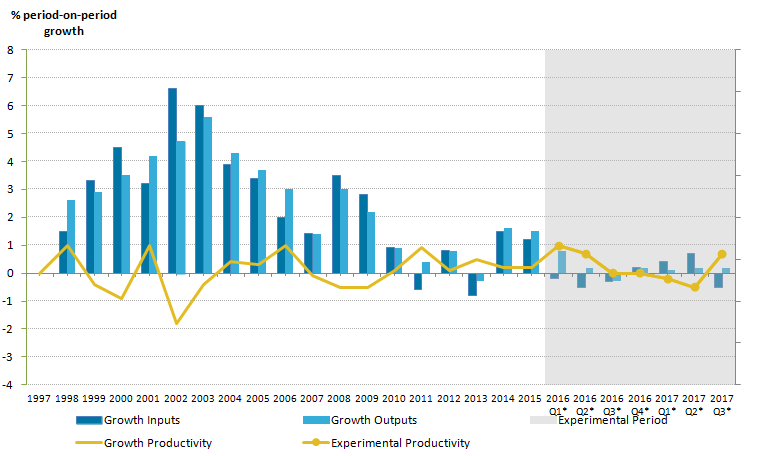 By contrast, the low share of expenditure accounted for by Social Security Administration and Children’s Social Care mean that the productivity performances of these services play less of a role in aggregate public service productivity. These weights tend to change relatively slowly through time – with healthcare and defence spending increasing slightly as a share of the total over this period.

Figure 7: Contributions to growth of total public service productivity by service area, 1998 to 2015 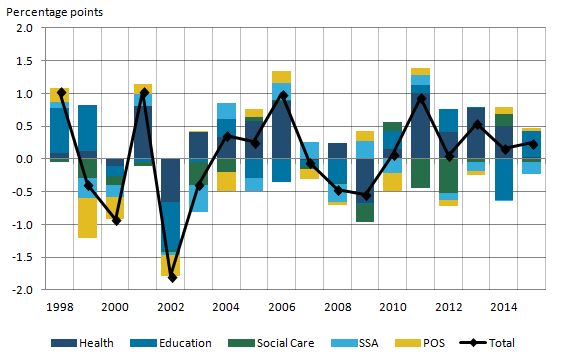 Download this image Figure 7: Contributions to growth of total public service productivity by service area, 1998 to 2015

We are currently undertaking a programme of development to improve estimates of public service productivity across all service areas. As a result, the estimates published as part of this release include a number of improvements to both the data used and the methods applied. Detailed in the articles published alongside this release, these include a new method to quality adjust our measure of the output of the criminal justice system – a sub-component of public order and safety (POS), itself a component of total UK public services.

The article, Quality adjustment of public service public order and safety output: current method, describes the method we currently use to quality adjust elements of public order and safety (POS) output and which is incorporated into estimates of total public service productivity. The purpose of such quality adjustments, in line with the recommendations of the Atkinson Review, is to reflect improvements in the outcomes that can be attributed directly to public service activity, which in a market setting would emerge through changes in quality-adjusted prices.

The new adjustment set out in this article explicitly adjusts the measure of output from the criminal justice system (CJS) accounting for factors such as the rate of recidivism, safety within prisons and the severity of re-offences. It should be noted that this adjustment, as with other public service output quality adjustments, is not included within the UK National Accounts. 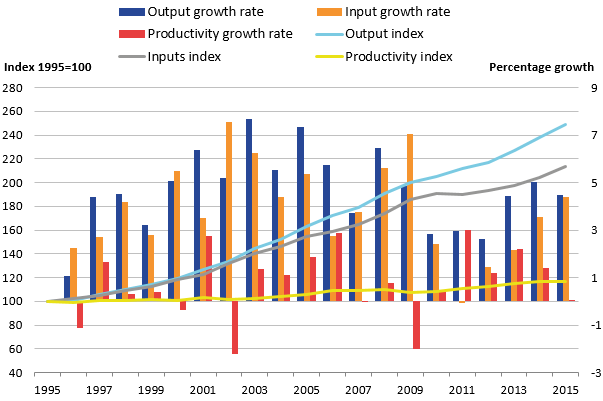 In 2015 – the most recent year for which detailed service-level data are available to support productivity analysis – productivity grew for a sixth consecutive year, although it did so by only 0.1%; this is the slowest rate of growth since 2009. The moderation of productivity growth in 2015 reflects a slight slowdown in output growth and an acceleration of inputs growth. Two important drivers of this latter trend were increased NHS expenditure on purchases of care from non-NHS providers, and lower price growth for most spending on goods and services by NHS trusts and foundation trusts. These effects both helped to push up growth in the volume of inputs.