Compared with the same quarter a year ago, labour productivity, on an output per hour basis fell by 0.1% in Quarter 4 (Oct to Dec) 2018. This is the second consecutive quarterly fall in labour productivity as estimates for the previous quarter have been revised downwards.

For 2018 as a whole labour productivity grew by 0.5% compared with the previous year, which is well below the annual average of 2% experienced before the 2008 economic downturn.

Figure 1: Productivity, as measured by output per hour, was 18.3% beneath its pre-downturn trend, UK

Download this chart Figure 1: Productivity, as measured by output per hour, was 18.3% beneath its pre-downturn trend, UK

Output per hour in the services industries compared with the same period a year ago, increased by 0.4% in the latest quarter (Quarter 4 (Oct to Dec) 2018), with output increasing faster than hours worked. In manufacturing over the year labour productivity fell by 1.1%, with both output and hours worked falling.

We now publish labour productivity, multi-factor productivity and public service productivity for the same time period. But how do these different estimates relate to one another, and importantly where do they differ?

Table 1 compares the market and non-market sector along with their relative weights.

Experimental multi-factor productivity estimates are only calculated for the market sector due to challenges in measuring inputs and output in the non-market sector. Growth accounting de-composes the growth in market sector output per hour into that attributable to changes in: labour composition (the skills of the workforce), capital deepening (capital per hour worked) and multi-factor productivity (a residual, encompassing spillovers and improvements in technology).

Download this table Table 1: UK labour productivity by sector of the economy

Notes for: How to interpret the different measures of productivity published today

In Quarter 4 (Oct to Dec) 2018, multi-factor productivity (MFP) in the UK market sector is estimated to have decreased by 0.6% compared with the same quarter in 2017.

Estimates of MFP augment our labour productivity estimates by taking account of movements in productive capital (such as machinery and software) and compositional developments in the labour market (for example, an increase in the number of workers with university degrees), as well as hours worked. This is explained in our simple guide to MFP.

More than 10 years on, since the 2008 financial crisis, labour productivity (as measured by output per hour worked) is only just ahead of its level at the end of 2007 and MFP is still 4 percentage points lower, having grown only slowly and intermittently since 2009. This contrasts with trend growth in MFP of over 1% per year prior to the financial crisis.

For the first time this quarter, we have provided more granular estimates for the manufacturing industry. This is part of our development plan to expand our statistics to encompass 64 separate industries. We will decide on the level of granularity of the published estimates based on careful assessment of the quality of the expanded dataset. Figure 2 shows annual multi-factor productivity (MFP) results for 13 two-letter manufacturing sub-sectors such as CA (food products, beverages and tobacco) and CH (basic metals and metal products).

For the manufacturing industry as a whole, MFP in 2018 was just 0.3% higher than in 2007. But this masks large positive and negative movements in MFP across different sub-sectors. The best performing sub-sector in terms of MFP is CL (transport equipment), while other sub-components with strong positive MFP growth include CE (chemicals and chemical products), CM (other manufacturing), and CI (computer, electronic and optical products). The worst performer in terms of MFP is CF (basic pharmaceutical products and preparations), with CJ (electrical equipment), CH (basic metals and metal products) and CK (machinery and equipment not elsewhere classified) not far behind.

Decomposition of cumulative growth of output per hour worked, 2007 to 2018, UK, manufacturing sub-sectors and total manufacturing

7.       CG is: Rubber and plastic products and non-metallic mineral products.

11.    CK is: Machinery and equipment not elsewhere classified.

Download this chart Figure 2: Multi-factor productivity across manufacturing has varied

The figure representing the productivity puzzle is well-cited, where output per hour is presented alongside its projected pre-downturn trend. For the first time we have decomposed the gap of market sector labour productivity into contributions from changes in labour composition, capital per hour and the remaining part; multi-factor productivity (MFP). In simple terms, MFP “explains” the portion of growth of labour productivity that cannot be attributed to improvements in capital or labour.

As shown in Figure 3, most of the gap is from MFP, which is still about 4% below the level in 2008, whereas if the pre-downturn trend had continued, MFP would now be about 14% above the level in 2008. In the real world, changes in MFP can arise for several reasons including technological progress, economies of scale, changes in management techniques and business processes or more efficient use of factor inputs. MFP is linked, therefore, not to an increase in the quantity or quality of measured factor inputs but rather to how they are employed. In practice, MFP may also reflect measurement error of inputs and outputs and missing factors of production.

For the most recent periods the weakness in capital services per hour worked relative to its pre-downturn trend also emerges as part of the explanation for the below-trend performance in productivity. Only improving labour composition has kept pace with pre-downturn growth, reflecting continuing growth in the share of hours worked by workers with above-average qualifications.

Growth in output per hour from 1994 and contribution to productivity gap from 2008, UK market sector 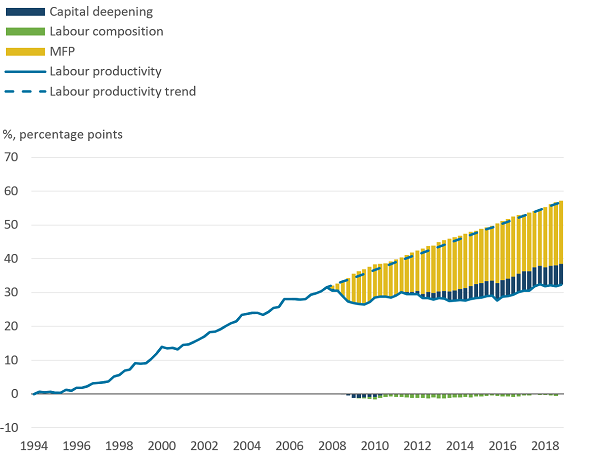 Download this image Figure 3: Multi-factor productivity estimated to be the largest explanation for the productivity gap

Labour is the largest domestic cost facing most businesses in the UK, and so rising labour costs are an important indicator of domestic inflationary pressures. The extent to which changes in the cost of labour affect companies’ production costs, and hence inflation, depends on growth in unit labour costs (ULCs) — how wages and other labour costs facing companies are growing relative to productivity.

ULCs represent the full labour costs, wages and salaries as well as social security and pension contributions paid by employers, incurred in the production of a unit of output.

ULCs grew by 3.1% in the year to Quarter 4 (Oct to Dec) 2018, following growth of 2.9% in the previous quarter. Following a period of low or negative growth, ULC growth has fluctuated around 2.1% for the past two years. This increase broadly reflects higher hourly labour cost growth, with relatively little offsetting output per hour growth.

Compared with the same quarter in the previous year, productivity for total public services decreased by 0.5% in Quarter 4 (Oct to Dec) 2018.

Placing this in the context of a longer time series, Figure 5 combines the experimental quarterly data in this latest release, and the annualised versions of these for 2017 and 2018, with estimates between 1997 and 2016 taken from our latest annual release.

The latest annualised quarterly data suggest that 2018 saw the first annual fall in public service productivity since 2010, but this should be treated with caution until the more robust annual estimate for 2018 is available. In particular, the experimental data in this release cannot adjust for changes in quality in the experimental period. Nonetheless, public service productivity is estimated to have increased by a total of 5.0% between 2010 and 2018 (an average of 0.6% per year).

Figure 5: Strong productivity growth in Quarter 4 2018, but still falling over the year

Download this chart Figure 5: Strong productivity growth in Quarter 4 2018, but still falling over the year

In February we released experimental statistics covering productivity estimates for 2017 for various levels of geography. This year “real” estimates of labour productivity data for LEPs were published for the first time. These constant price “real” data are most useful for assessing time series trends. They allow us to understand whether there has been any increase in volumes of goods and services per labour input, with the effects of changes in prices removed.

Figure 6 shows a scatter plot for real gross value added (GVA) growth and hours worked growth over the period 2010 to 2017 for the LEPs.

Full details of productivity for LEPs can be found in the accompanying dataset.

In February we published an update on our workplan to review and improve the methodology used to estimate investment in intangible assets, as well as providing updated estimates of investment to 2016.

Intangible assets, also known as knowledge assets or intellectual capital, are assets that do not have a physical or financial embodiment. Not all intangible assets are included in the national accounts, but our broader definition encompasses assets such as software, reputation and branding, design, and research and development, which contribute to the long-term accumulation of a business’ knowledge capital. Such assets complement physical (tangible) capital, such as buildings, equipment and machinery, in driving economic growth.

Read the full Developing experimental estimates of investment in intangible assets in the UK: 2016 article.

On 13 March 2019 we held a productivity forum to outline our key developments and core priorities for the future. Slides from the event are available. These also include a presentation from the Organisation for Economic Co-operation and Development (OECD) on measuring international productivity gaps.