Total value of UK imports and exports of goods together with indices of volume and price, including an early monthly estimate of the value of trade in services.

A small error in the UK Trade: April 2018 bulletin occurred affecting Figure 7 only. This was due to a formatting error resulting in the data points in the figure, and the downloadable data for the figure, to be scaled incorrectly. This error has impacted the whole period in Figure 7.

This had no impact on any other series or commentary in the UK trade: April 2018 publication.

Figure 7 and downloadable data for the figure have now been corrected and ONS apologises for any inconvenience this may have caused.

Improvements we are introducing in June and July 2018

We have embarked upon and are delivering against an ambitious UK trade development plan, which is providing users with better explained and more detailed statistics. We have developed new IT systems for trade in goods and services that will be used to deliver UK National Accounts, The Blue Book and UK Balance of Payments, The Pink Book 2018 to help us deliver against objectives set out in Section 4.2 of the plan.

Volume and price indices will also be replaced with chained volume measures (CVMs) and implied deflators (current price divided by CVM) from 10 July. You should note that this will introduce changes to the layout of Tables 3, 5, 6, 9 and 10 in the publication tables dataset.

Estimates derived from the International Passenger Survey (IPS) are used to help measure imports and exports of travel services. The IPS is in the process of transferring data collection from paper forms to tablet computers. Initial analysis of the new data suggests there may be discontinuities arising from the change in mode of collection. These new data will not be used in estimates of trade in travel services, in headline trade or other national accounts estimates until we have produced a consistent time series on the new basis.

Unless otherwise stated, all trade values discussed in this release are in current prices (without the effect of inflation removed). The time series dataset also includes chained volume measures (series for which the effects of inflation have been removed) and these are indexed to form the volume series presented in the publication tables dataset.

Data are supplied by over 30 sources, including several administrative sources; HM Revenue and Customs (HMRC) covering trade in goods is the largest. For trade in services, data are less timely than trade in goods estimates and are sourced mainly from survey data and a variety of administrative sources. The services data are processed quarterly, so monthly forecasts are made to provide a complete trade total. The most recent monthly data can therefore be considered more uncertain.

Trade statistics for any one month can be erratic. For that reason, we recommend comparing the latest three months against the preceding three months and the same three months of the previous year.

Oil and other “erratic” commodities can make a large contribution to trade in goods, but often mask the underlying trend in the export or import values due to their volatility. The “erratics” series includes ships, aircraft, precious stones, silver and non-monetary gold. Non-monetary gold can have a particularly large impact on growth rates, due to the large volumes of gold traded on the London markets. Therefore, we also publish data exclusive of these commodities, which may provide a better guide to the emerging trade picture.

In accordance with the National Accounts Revisions Policy, data in this release have been revised from January 2018 to March 2018 for both goods and services data.

The UK Statistics Authority suspended the National Statistics designation of UK trade on 14 November 2014. We have now responded to all of the specific requirements of the reassessment of UK trade and are in the final stages of providing evidence to the Authority. We are undertaking a programme of improvements to UK trade statistics in line with the UK trade development plan that will also address anticipated future demands. While delivering against this plan, we will continue to work with the Office for Statistics Regulation team to regain National Statistics status for UK trade statistics. We welcome feedback on this development plan.

Figure 1 shows three-month on three-month trade balances for the period October 2013 to April 2018.

The trade balance for both goods and services deteriorated in the three months to April 2018; the trade in services surplus narrowed £1.3 billion to £26.5 billion and the trade in goods deficit widened £0.6 billion to £36.2 billion.

Figures 2 and 3 show the contribution of commodities to total EU and non-EU exports and imports for the three months to April 2018.

The UK’s trade in goods balance with countries outside of the EU improved by £0.6 billion in the three months to April 2018 due to imports falling by more than exports; imports fell £2.5 billion (Figure 3) compared with a fall of £1.9 billion for exports (Figure 2).

The largest declines in commodity imports from countries outside of the EU were £2.0 billion in imports of machinery and transport equipment (mainly aircraft and mechanical machinery) and £0.9 billion of miscellaneous goods.

The UK’s trade in goods balance with EU countries worsened by £1.2 billion in the three months to April 2018 due to exports falling by more than imports; while exports fell £1.3 billion (Figure 2), imports were relatively flat, falling just £58 million (Figure 3).

Figures 4 and 5 show the three-month on three-month UK goods export and import values, volumes and prices for the period October 2013 to April 2018.

The total value of goods exported to, and imported from, the UK fell 3.6% and 2.1% respectively in the three months to April 2018. The declines were driven predominately by falling volumes as prices for exports and imports showed relatively small movements; export volumes declined 2.9% versus export prices, which fell 0.3% (Figure 4), while import volumes fell 1.4% compared with an increase of 0.1% for import prices (Figure 5). 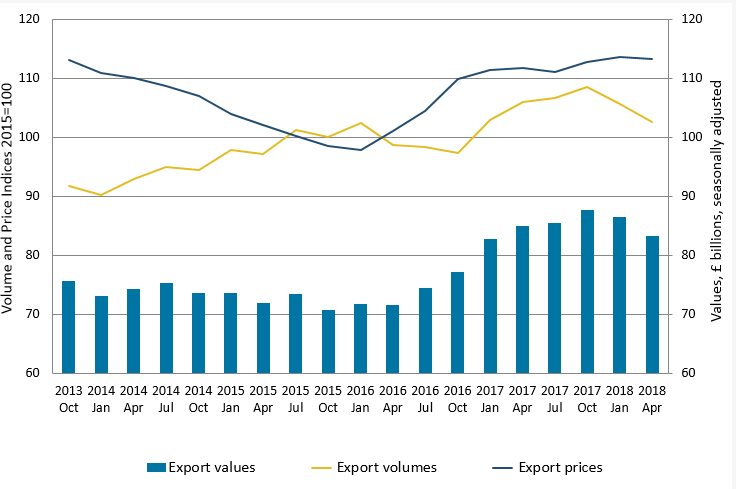 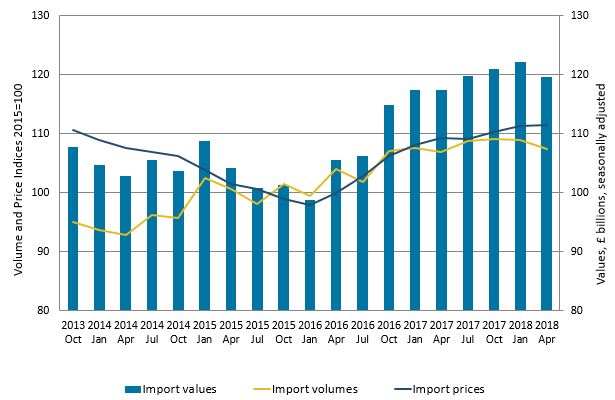 Figure 6 shows the percentage change to volumes for goods exports and imports by commodity group, for the three months to April 2018 compared with the previous three months to January 2018.

Apart from food, beverages and tobacco, export volumes fell across all commodity groups in the three months to April 2018. Volumes declined 4.1% for fuels, followed by 3.1% for semi-manufactures and 1.8% for finished-manufactures.

Download this chart Figure 6: Percentage change to volumes for goods exports and imports by commodity group, three months to April 2018 compared with three months to January 2018

The UK total trade deficit (goods and services) narrowed £6.7 billion to £30.8 billion in the 12 months to April 2018. An improvement to the trade in services balance was the main factor, as the trade surplus the UK has in services widened £9.9 billion to £108.7 billion. The trade in goods deficit worsened, widening £3.2 billion to £139.5 billion over the same period.

In accordance with the National Accounts Revisions Policy, data in this release have been revised from January 2018 (Figure 8).

Supplementary quarterly data analysed by product according to the UK trade in goods by classification of product by activity (CPA 2008) are also available.

Experimental data are available by commodity and partner country via an article and datasets we published in April 2016. From July 2018 this data will be available monthly as part of the UK trade statistical bulletin release.

We now publish the proportion of sales that are exports in the manufacturing industries as an Excel dataset to accompany the Index of Production release. The proportion of export sales have been published for industries collected by the Monthly Business Survey where the value of exports are reported as well as the total turnover. These are non-seasonally adjusted series.

On 28 October 2016, we published an article containing information on trade – Why has the value of the pound been falling and what could this mean for people in the UK?

On 5 September 2016, we published a short story on the UK trade and investment relationship with the USA. This is part of a series that began in June 2015; previous topics cover South America, China and Africa.

Additional statistical data and analyses for UK trade statistics that have not been included in our standard publications are also available.

Trade is measured through both imports and exports of goods and/or services. Data are supplied by over 30 sources including several administrative sources, HM Revenue and Customs (HMRC) being the largest.

This monthly release contains tables showing the total value of trade in goods together with index numbers of volume and price. Figures are analysed by broad commodity group (values and indices) and according to geographical area (values only). In addition, the UK trade statistical bulletin also includes early monthly estimates of the value of trade in services.

Further qualitative data and information can be found in the attached datasets. This includes data on:

Detailed methodological notes are published in the UK Balance of Payments, The Pink Book 2017.

The UK trade methodology web pages have been developed to provide detailed information about the methods used to produce UK trade statistics.