The UK's trade and investment relationship with Africa: 2016

Recent changes in the UK's trade and investment relationship with Africa.

Africa accounted for 5.1% of global gross domestic product (GDP)1 in 2015, compared with 2.4% for the UK. Africa is made up of 54 countries and the 3 largest economies (Nigeria, Egypt and South Africa) accounted for around half of Africa’s GDP in 2015.

Africa’s share of global GDP has experienced little overall change (falling by 0.1 percentage points) over the past 35 years; in contrast the UK’s share has fallen by 1.4 percentage points over the same period. 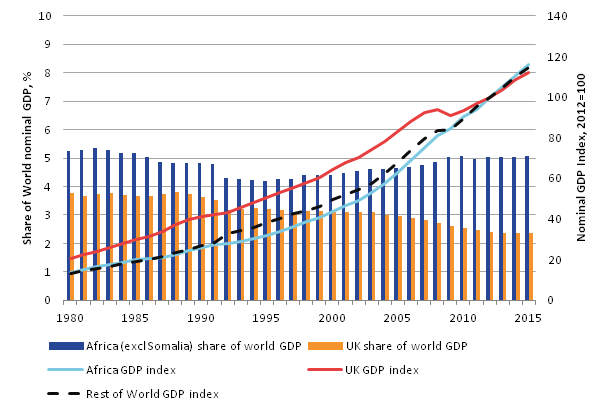 Notes for The UK and Africa in a global context

The majority of the UK’s trade with Africa is in goods; which accounted for 68.3% of total trade1 between the 2 regions in 2014, with the remainder accounted for by services. South Africa has traditionally been the UK’s largest export and import market in Africa. The UK ran a trade in goods and services deficit with South Africa in all periods between 2004 and 2010, which averaged £1.2 billion. However, following an increase in UK service exports in 2011, the UK began recording a trade surplus, which stood at £0.6 billion in 2014.

In 2014, the value of the UK’s stock of foreign direct investment (outward FDI) in Africa was £42.5 billion. This was notably larger than the stock of FDI held by African investors in the UK (inward FDI), which stood at £3.0 billion in 2014.

In terms of industry, mining and quarrying, and financial services were the main industrial groupings in receipt of UK FDI, accounting for 54.4% and 34.3% of total UK FDI into Africa in 2014, respectively.

The value of the stock of FDI held in the UK by African investors also grew between 2005 and 2014, increasing from £0.5 billion to £3.0 billion. The main UK industries receiving direct investment from Africa were transportation and storage, and administrative and support service activities which accounted for 10.3% and 10.0% of total FDI into the UK from Africa in 2014, respectively.

A larger increase in UK investment into Africa compared with Africa’s investment into the UK resulted in the UK’s net FDI position with the continent rising by £19.2 billion to £39.5 billion between 2005 and 2014.

It is worth noting that UK FDI earnings from both the mining and quarrying, and financial services industries have fallen since 2011, although the decline in earnings from the mining and quarrying industries has been larger, having more than halved since 2011. Some of this decline is attributable to a fall in world crude oil prices since the second quarter (April to June) of 2014.

FDI earnings generated by African investors in the UK have traditionally been much smaller compared with those earned by the UK in Africa, and did not exceed £0.2 billion over the past decade. As such, the UK’s FDI earning balance with Africa continues to remain in surplus.