This fall reflects total average hours worked growing faster than gross value added (GVA) growth; 2% and 1.8% respectively. The fall in output per hour growth was attributed to a fall in manufacturing output per hour of 0.9%, with total average hours worked growing twice as fast as output (1.8% and 0.9%) respectively. In contrast, productivity for services increased 0.2%.

Figure 1 breaks down the log growth in productivity between Quarter 3 (July to Sept) 2009 and Quarter 1 2019 comparing the split of hours, (which have had the sign reversed to reflect their effect on productivity,) and GVA. Since the downturn GVA growth has averaged 1.6%, slightly higher than the average hours growth of 1.2%. As a result, productivity has seen weak growth averaging 0.5%, with brief instances of high growth most noticeably in the initial post-downturn years.

Subsequent years experienced a slump in productivity, with consecutive periods of negative growth between the period of Quarter 2 (Apr to June) 2012 to Quarter 3 2013. Since then, productivity remained somewhat weak, having brief instances of high growth in Quarter 2 2015 and Quarter 4 (Oct to Dec) 2016. The latter being the recording the highest quarter on year growth since the downturn.

Figure 1: In Quarter 1 (Jan to Mar) 2019 growth in hours slightly exceeded growth in gross value added leading to a fall in productivity

Download this chart Figure 1: In Quarter 1 (Jan to Mar) 2019 growth in hours slightly exceeded growth in gross value added leading to a fall in productivity

The Office for National Statistics (ONS) is the only national statistical institute in the world to routinely publish quarterly experimental multi-factor productivity (MFP) estimates for the market sector. Figure 2 decomposes cumulative quarterly growth of market sector output per hour worked since Quarter 1 (Jan to Mar) 2008 into contributions from capital deepening (capital per hour worked) and labour composition (the skills make-up of the workforce), and the residual MFP contribution. In simple terms, MFP “explains” the portion of growth of labour productivity that cannot be attributed to improvements in capital or labour. More information can be found in our simple guide to MFP.

This figure highlights the prolonged weakness of market sector labour productivity since the financial crisis and how MFP, which is still 4.5 percentage points lower than in 2008 is a vital contributor to this.

Figure 2: Market sector output per hour has barely increased in the last 11 years

Download this chart Figure 2: Market sector output per hour has barely increased in the last 11 years

Capital deepening has also been exceptionally weak by historic standards, reflecting sluggish growth in investment and buoyant growth in hours worked. On the other hand, labour composition has steadily improved over the last 10 years.

Growth in output per hour from 1994 and contribution to productivity gap from 2008, UK market sector 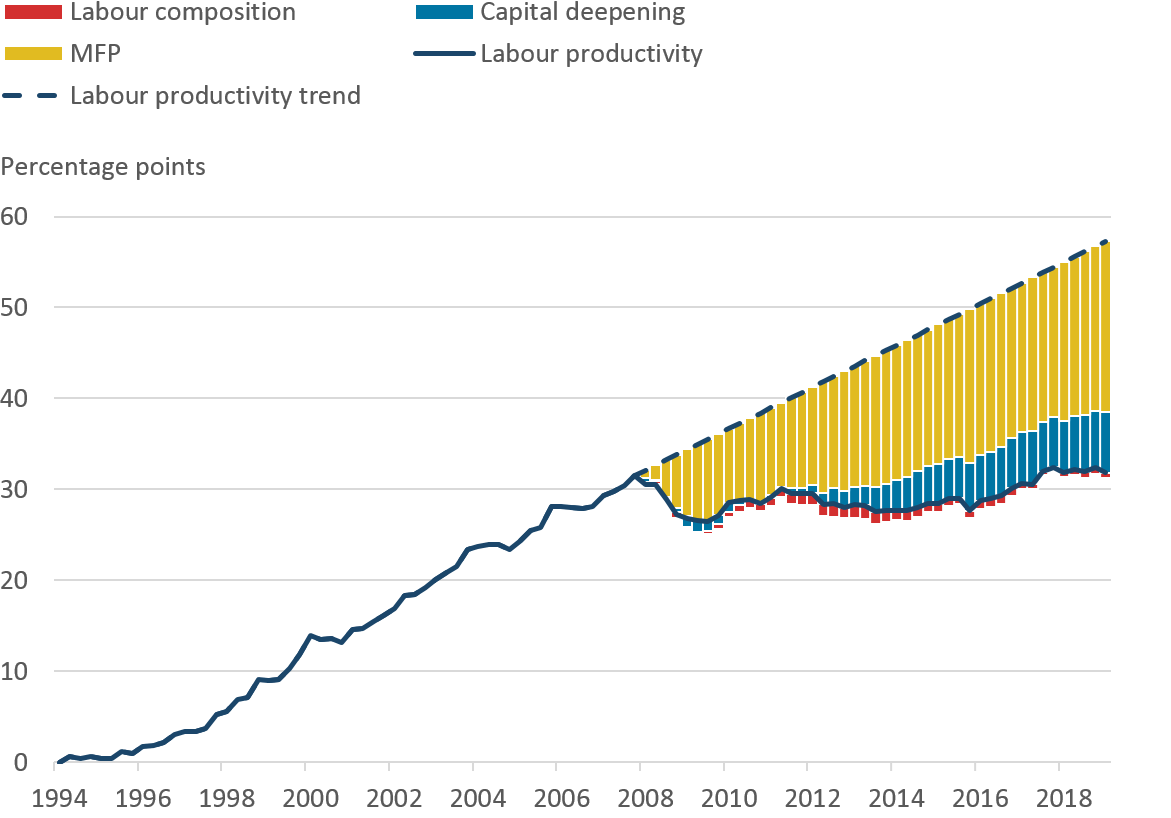 Download this image Figure 3: Multi-factor productivity estimated to be the largest driver of the productivity gap

From last quarter we began decomposing the gap of market sector labour productivity into contributions from changes in labour composition, capital per hour and multi-factor productivity (MFP). The largest of these three components is MFP. If pre-downturn trends had continued, MFP would now be about 14% above the level in 2008, rather than 4.5% lower. In the real world, changes in MFP can arise for several reasons including technological progress, economies of scale, changes in management techniques and business processes or more efficient use of factor inputs. MFP is linked, therefore, not to an increase in the quantity or quality of measured factor inputs but rather to how they are employed. In practice, MFP may also reflect measurement error of inputs and outputs and missing factors of production.

How does this convert into wages? Productivity growth drives wages growth and has been historically low over the last decade. If productivity had grown in line with its long-term trend, and wages as a share of income had remained constant, average market sector wages would today be just over £5,0001,2 higher in 2018 for the average worker.

Notes for: The productivity puzzle and the lost potential £5,000 in wages

In general, because productivity is a long-term structural trend, we advise looking at changes in productivity between periods that are further apart which can help to smooth any fluctuations in growth rates. The trend over the last year is an example of why this is important.

Figure 4: Productivity falls in Quarter 1 (Jan to Mar) 2019 when compared with the same quarter of the previous year

Download this chart Figure 4: Productivity falls in Quarter 1 (Jan to Mar) 2019 when compared with the same quarter of the previous year

Labour is the largest domestic cost facing most businesses in the UK, and so rising labour costs are an important indicator of domestic inflationary pressures. The extent to which changes in the cost of labour affect companies’ production costs, and hence inflation, depends on growth in unit labour costs (ULCs) — how wages and other labour costs facing companies are growing relative to productivity.

ULCs represent the full labour costs, wages and salaries as well as social security and pension contributions paid by employers, incurred in the production of a unit of output.

This analysis also highlights the firm-level characteristics driving differences in labour productivity across businesses. Over the period studied, 2006 to 2017, businesses that were older and larger – in terms of employment – were more productive on average. Additionally, foreign-owned businesses were around 18% more productive than equivalent, domestically-owned businesses, on average between 2006 and 2017. Figure 5 shows that the composition of the top-ranking industries for labour productivity changed very little between 2008 and 2017 and we find a similar result for the lowest ranking industries. The most productive industry divisions were predominantly capital intensive (production), while the least productive were predominantly labour intensive (services).

Figure 5: The top ranking industries by productivity have changed very little over time and are predominantly capital-intensive (production) industries

Compared with other European countries, the UK’s government investment in infrastructure accounted for 2.3 % of total government spending in 2017, higher than in Germany, France and Italy.

Government investment in infrastructure as a proportion of total government spending, EU G7 economies, 2006 to 2017

Productivity economic commentary: January to March 2019
Article | Released 5 July 2019
Draws together the main findings from official statistics and analysis of UK productivity to present a summary of recent developments.

Industry by region estimates of labour productivity: 2017
Article | Released 6 February 2019
Annual productivity estimates for 16 industries in Standard Industrial Classification 2007 section groups for each of the NUTS1 regions from 1997 to 2017. It compares annual productivity growth by region, as output per hour, relative to the UK and explains how manufacturing and services have grown across the regions.

Regional and sub-regional productivity in the UK
Article | Released 6 February 2019
Estimates for measures of labour productivity using a balanced gross value added (GVA) approach for NUTS1, NUTS2 and NUTS3 sub-regions of the UK, selected city regions and English local enterprise partnerships (LEPs) up to 2017. Estimates are in both real and nominal terms.

Public service productivity: total, UK, 2016
Article | Released 9 January 2019
Presents updated measures of output, inputs and productivity for public services in the UK between 1997 and 2015, in addition to new estimates for 2016.

Improving estimates of labour productivity and international comparisons
Article | Released 9 January 2019
Discusses recent Organisation for Economic Co-operation and Development findings showing that the methodologies, data sources and adjustments used to estimate the number of persons, jobs and hours worked varied significantly across countries, and explores these differences and the impact on our ICP.

How productive is your business?
Article | Released 6 July 2018
An interactive tool that aids businesses to calculate their productivity and compare their performance with other businesses in Great Britain.