Total value of UK exports and imports of goods and services in current prices, chained volume measures and implied deflators.

In accordance with National Accounts Revisions Policy, data in this release have been revised back to July 2019 when compared with our previous trade bulletin from 10 October 2019. Data in this release are consistent with the GDP first quarterly estimate for Quarter 3 (July to Sept) 2019 also published on 11 November 2019.

The UK Statistics Authority suspended the National Statistics designation of UK trade (PDF 72.8KB) on 14 November 2014. We have now responded to all of the specific requirements of the reassessment of UK trade. We continue to work with the Office for Statistics Regulation team to regain National Statistics status for UK trade statistics. We welcome feedback on our new trade statistics, developments and future plans. If you have any comments, please send them by email to trade@ons.gov.uk.

We are undertaking a programme of improvements to UK trade statistics in line with the UK trade development plan, including more detail and improvements now published to address anticipated future demands. On 24 October 2018, we published an article outlining our achievements so far and forward look regarding the transformation of our trade statistics.

Unless otherwise specified, data within this bulletin are in current prices, in other words, they have not been adjusted to remove the effects of inflation.

UK trade data within our monthly trade bulletin are published at around a six-week lag because of the timeliness of source data. For example, the January 2020 publication will include data up to the end of November 2019.

Trade statistics for any one month can be erratic. For that reason, we recommend comparing the latest three months against the preceding three months, and the same three months of the previous year.

Oil and other “erratic” commodities can make a large contribution to trade in goods, but often mask the underlying trend in the export or import values because of their volatility. The “erratics” series includes ships, aircraft, precious stones, silver and non-monetary gold. Non-monetary gold can have a particularly large impact because of the large volumes of gold traded on the London markets. Therefore, we also publish data exclusive of these commodities, which may provide a better guide to the emerging trade picture.

In line with international standards, the Office for National Statistics’ (ONS’s) headline trade statistics contain the UK’s exports and imports of non-monetary gold. Non-monetary gold is the technical term for gold bullion not owned by central banks.

Because a significant amount of the world’s trade in non-monetary gold takes place on the London markets, this trade can have a large impact on the size of and change in the UK’s headline trade figures.

Non-monetary gold is one subcomponent of the commodity group “unspecified goods”.

More information about the ONS’s recording of non-monetary gold is available.

These data are our best estimates of bilateral UK trade flows, compiled following internationally agreed standards and using a wide range of robust data sources. However, in some cases alternative estimates of bilateral trade flows are available from the statistical agencies for those countries or through central databases such as UN Comtrade. Differences between estimates are known as trade asymmetries and are a known aspect of international trade statistics, affecting bilateral estimates across the globe, not just the UK.

We are heavily engaged in analysis of these asymmetries, developing strong bilateral relationships with other countries to understand, explain and potentially reduce them. We have published a series of analyses showing comparisons and the relative strengths of different estimates, which users may wish to reference to help them better understand the quality of our bilateral trade estimates.

This year, because of the very demanding set of changes in the annual update, we have not fully reconciled 2017 annual data, instead producing an indicative balance to allow further time for final quality assurance of the data. Consequently, the reference year and last base year for all chained volume measure (CVM) series remains as 2016.

Figure 1 and Table 1 show the change to goods, services and total trade balances, along with exports and imports, in Quarter 3 2019 compared with Quarter 2 (Apr to June) 2019.

Figure 1: Rising exports drove the narrowing of the trade deficit in Quarter 3 2019

Changes in the UK trade balances, exports and imports, Quarter 3 (July to Sept) 2019 compared with Quarter 2 (Apr to June) 2019 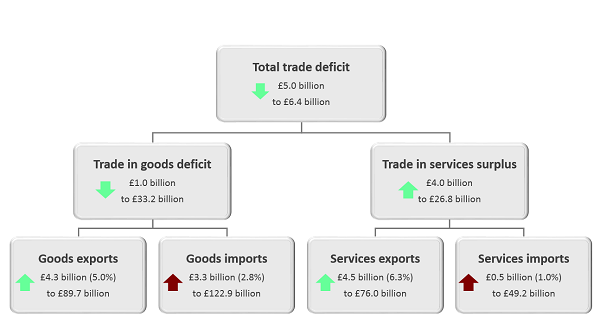 Download this image Figure 1: Rising exports drove the narrowing of the trade deficit in Quarter 3 2019

Download this table Table 1: The trade deficit narrowed in Quarter 3 2019, largely because of rising exports

The widening of the trade in services surplus in Quarter 3 2019 was because of a £4.5 billion rise in services exports to £76.0 billion, driven largely by other business services, intellectual property, financial services and travel. Services imports increased by a lesser £0.5 billion to £49.2 billion.

The narrowing of the trade in goods deficit in Quarter 3 2019 was because of a £4.3 billion increase in goods exports to £89.7 billion, driven largely by machinery and transport equipment, and chemicals, which rose by £2.6 billion and £1.2 billion respectively.

The increase in goods exports in Quarter 3 2019 was partly offset by the £3.3 billion rise in goods imports to £122.9 billion. Imports of machinery and transport equipment increased by £3.4 billion, driven largely by aircraft and cars, which increased by £1.1 billion and £0.7 billion respectively. Chemical imports also rose by £1.3 billion, driven mainly by a £1.0 billion rise in imports of medicinal and pharmaceutical products.

Download this chart Figure 2: The trade deficit narrowed in Quarter 3 2019

Exports to EU countries rose £1.5 billion to £42.2 billion in Quarter 3 2019. This was driven largely by increases in chemicals, unspecified goods, and machinery and transport equipment, which rose £0.6 billion, £0.3 billion and £0.3 billion respectively.

Imports from EU countries rose £2.8 billion to £65.5 billion in Quarter 3 2019. Imports of machinery and transport equipment increased by £1.8 billion, largely because of increased imports of cars and aircraft of £0.6 billion and £0.4 billion respectively. Chemicals also increased by £1.2 billion, driven largely by a £0.8 billion increase in medicinal and pharmaceutical products.

Figure 3 shows the changes in goods exports, imports and balances with EU and non-EU countries in Quarter 3 2019.

Figure 3: The narrowing of the trade in goods deficit was largely because of increased exports of goods to non-EU countries

Download this chart Figure 3: The narrowing of the trade in goods deficit was largely because of increased exports of goods to non-EU countries

This section presents volume and price estimates of UK trade exports, imports and balances, using chained volume measures (CVMs) and implied deflators (IDEFs). A CVM is a “real” measure in that it has had the effect of inflation removed. An IDEF shows the implied change in average prices for the respective components of the trade balance, for example, the IDEF for imports will show the average price movement for imports.

Figure 4 shows the UK trade balances on a CVM basis, quarter on quarter from September 2017 to September 2019.

Use our map to get a better understanding of what goods the UK traded with a particular country. Select a country by hovering over it or using the drop-down menu.

What about trade in a particular commodity in 2018?

Use our interactive tools to understand UK trade of a particular commodity in 2018.

Select a commodity from the drop-down menu or click through the levels to explore the data.

Rising imports of goods in the 12 months to September 2019 were largely because of unspecified goods (which includes non-monetary gold), machinery and transport equipment, miscellaneous manufactures and material manufactures, which increased by £9.3 billion, £7.2 billion, £4.4 billion and £3.2 billion respectively. This was offset partially by a fall of £2.3 billion in fuel imports.

Figure 5: The trade deficit widened in the 12 months to September 2019, largely because of a widening of the trade in goods deficit 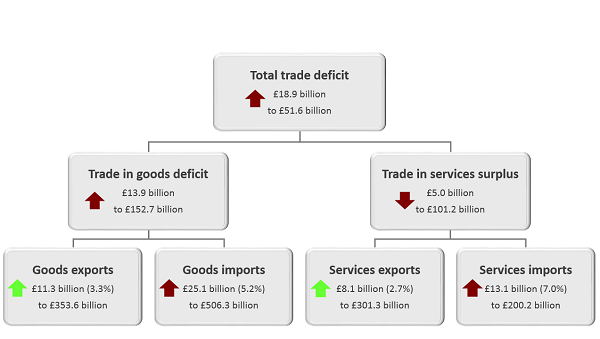 Download this image Figure 5: The trade deficit widened in the 12 months to September 2019, largely because of a widening of the trade in goods deficit

Download this table Table 2: The trade deficit widened in the 12 months to September 2019, largely because of a widening of the trade in goods deficit

The widening of the trade in goods deficit with non-EU countries in the 12 months to September 2019 was mainly because of imports, which increased £20.7 billion to £239.1 billion, while exports increased by a lesser £8.9 billion to £181.9 billion.

The largest contributors to the increase in imports from non-EU countries were unspecified goods (which includes non-monetary gold), machinery and transport equipment, and miscellaneous manufactures, which increased £9.7 billion, £4.2 billion and £2.7 billion respectively.

The increase in non-EU exports was driven largely by a £4.7 billion increase in exports of miscellaneous manufactures, as well as exports of chemicals and unspecified goods, which both increased by £1.4 billion.

Increased imports from EU countries were largely because of machinery and transport equipment, and miscellaneous manufactures, which increased £3.0 billion and £1.7 billion respectively, offset partially by a £2.4 billion fall in imports of fuels.

Rising exports to EU countries were largely because of machinery and transport equipment, fuels and miscellaneous manufactures, which increased £1.8 billion, £1.4 billion and £1.3 billion respectively.

Figure 6: The widening of the trade in goods deficit was mainly because of increased imports from non-EU countries

Download this chart Figure 6: The widening of the trade in goods deficit was mainly because of increased imports from non-EU countries

Other related trade data
Released 11 November 2019
Other UK trade data related to this publication. This includes trade in goods for all countries with the UK, monthly export and import country-by-commodity trade in goods data, and revisions triangles for monthly trade data.

On 11 September 2019, we published International exports of services from subnational areas of the UK: 2017, which provides experimental estimates of services exports for 2017 for NUTS1, NUTS2, NUTS3 and 15 joint authorities, including industry and non-EU and EU split.

On 31 July 2019, we published Modes of supply, UK experimental estimates: 2018. This release contains the first exploratory estimates of UK trade in services broken down by mode of supply, showing how services trade is conducted, in addition to what is traded and with whom. The UK is one of the first countries to have developed such estimates.

On 24 October 2018, we published Estimating the value of service exports abroad from different parts of the UK: 2011 to 2016, which provides a breakdown of services exports by functional category from the nine English regions, Scotland, Wales and Northern Ireland.

On 6 July 2018, we published UK trade in goods and productivity: new findings. This article describes a new dataset we have developed, which includes information from both the Annual Business Survey and HM Revenue and Customs’ trade in goods administrative data. It shows a strong association between trader status and productivity, highlighting the prevalence of trading behaviour across different types of business.

Supplementary quarterly data analysed by product according to the UK trade in goods by classification of product by activity (CPA 2008) are also available.

Trade is measured through both exports and imports of goods and services. Data are supplied by over 30 sources including several administrative sources, HM Revenue and Customs (HMRC) being the largest for trade in goods.

This monthly release contains tables showing the total value of trade in goods together with chained volume measures (CVMs) and implied deflators (IDEFs). Figures are analysed by broad commodity group (CP, CVMs and IDEFs) and according to geographical area (CP only). In addition, the UK trade statistical bulletin also includes early monthly estimates of the value of trade in services.

Further qualitative data and information can be found in the attached datasets. This includes data on:

Detailed methodological notes are published in the UK Balance of Payments, The Pink Book 2019.

The UK trade methodology web pages have been developed to provide detailed information about the methods used to produce UK trade statistics.