There are two broad types of small area population estimates, both of which are included in this release.

The main products are the estimates for Super Output Areas (SOAs), which are based on the 2011 Census and rolled forward annually using a ratio change methodology. This approach uses the change in the population recorded in the GP Patient Register as an indicator of the change in the true population. Estimates for LSOAs by broad ages and MSOAs by quinary age groups (five-year age groups) hold National Statistics status. Estimates at a greater level of disaggregation by age including quinary age for LSOAs and single year of age for both SOAs are supporting information only. More information can be found in Small Area Population Estimates: Summary of methodology review and research update.

The remainder of the small area population estimates products relate to a range of different geographic areas and are derived directly from the SOA figures. First, estimates for LSOAs are broken down to Output Area (OA) level using an apportionment approach. These OA estimates are then aggregated to produce estimates for electoral wards and Westminster Parliamentary constituencies on a best-fit basis. Estimates for National Parks are also calculated from the OA-level data. Electoral wards, Westminster Parliamentary constituencies and National Parks all hold Experimental Statistics status. Estimates for health geographies are aggregated directly from LSOAs and hold National Statistics status.

Small area population estimates are used by both central government departments and local authorities for a range of purposes, including planning and monitoring of services and as denominators for the calculation of various rates and indicators. The Quality and Methodology Information (QMI) report has further information on the quality and use of these statistics.

Population estimates for LSOAs and MSOAs are often used for research and analysis as, unlike other small area geographies, such as electoral wards, they are specifically designed for statistical purposes. Electoral ward population estimates are of particular interest to local government organisations. Parliamentary constituency estimates are of importance to Parliamentary organisations, researchers and Members of Parliament (MPs). Population estimates by health geographies are widely used within the health sector, and information on National Parks is valuable to both local government and the various National Park authorities.

In some local authorities, the number of people included in the GP Patient Register data in 2018 has increased or decreased in a large number of LSOAs and MSOAs compared with 2017 data, which may be because of changes in administrative practices or may reflect genuine population change. The process of constraining LSOA and MSOA estimates to previously published local authority population estimates means that this pattern is not automatically reflected in the mid-year estimates.

The age structures of populations at a local level can vary widely indicating different requirements for public services provision, and median age provides a useful measure of this. Median age is the age that divides a population into two numerically equal groups (that is, half the people are younger than this age and half are older). The age structures of the 50 MSOAs with the highest median age and the 50 MSOAs with the lowest median age are shown in Figure 1.

Figure 1: Comparison of MSOA population age structures for the 50 MSOAs with the highest and lowest median ages, mid-2018

Download this chart Figure 1: Comparison of MSOA population age structures for the 50 MSOAs with the highest and lowest median ages, mid-2018 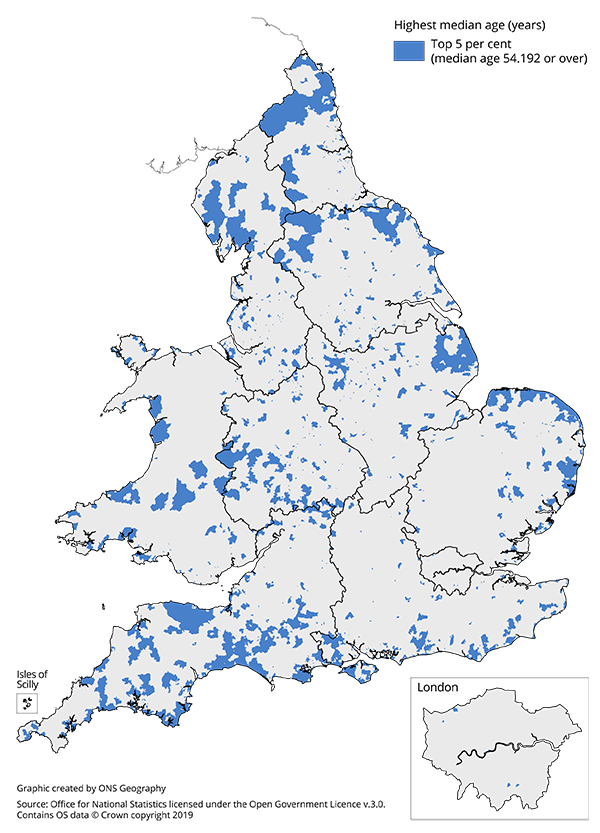 Figure 3 shows the percentage change in population between mid-2017 and mid-2018 for MSOAs in England and Wales. The pattern of growth exhibits many of the patterns of population change seen at the local authority level, with relatively large population increases in central London, particularly centered on the City of London, Westminster, Camden and Tower Hamlets. As with analysis at the local authority level, many of the areas of England and Wales experiencing population decreases are coastal or rural. However, analysis at MSOA level shows that there are areas across England and Wales that have seen their populations decrease. For example, our estimates suggest that in 309 of the 983 MSOAs in London, the population decreased between 2017 and 2018. 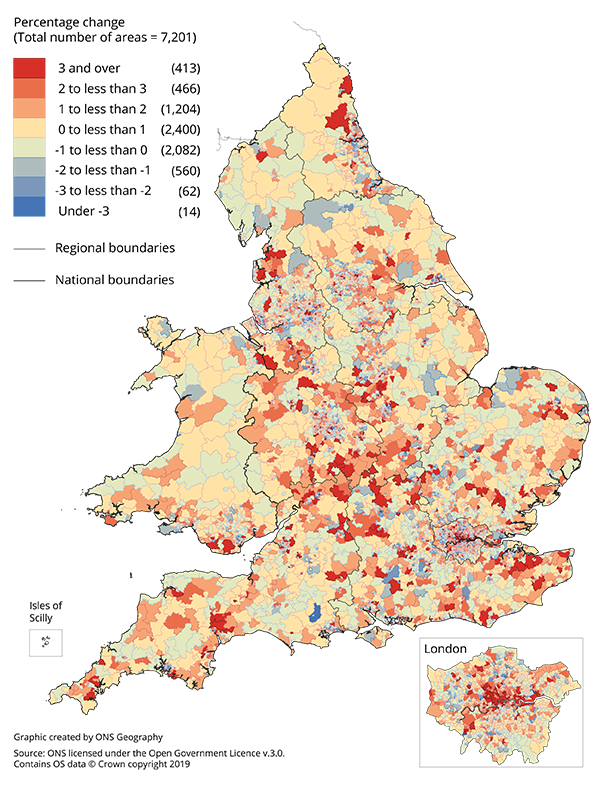 Clinical commissioning groups (CCGs) are responsible for deciding how NHS funds are spent in their local area. They were introduced, for England only, by the Health and Social Care Act 2012 as part of a new structure for NHS organisation, which came into force on 1 April 2013.

CCGs are organised into the higher level of health geography of NHS England (Region, Local office) and NHS England (Region). These geographies are formed from groups of CCGs, and therefore population estimates for these areas are also created by directly aggregating LSOA estimates.

Between mid-2017 and mid-2018, 5 of the 10 largest population increases were found in CCGs in London, with the biggest increase being NHS Central London (Westminster) CCG at 4.5%.

Only nine CCGs had population decreases between mid-2017 and mid-2018, with the greatest decreases being 0.4% in NHS Blackpool CCG and 0.3% in NHS Luton CCG.

Wide variation in age structure of population across CCGs 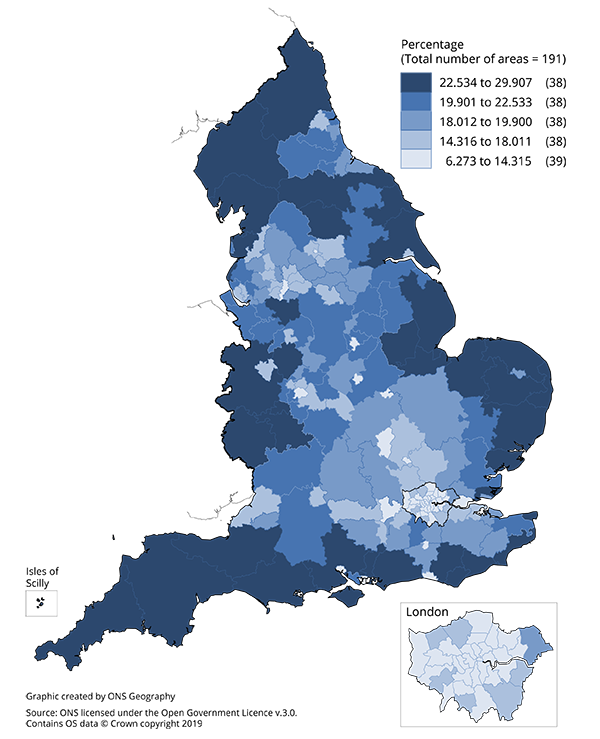 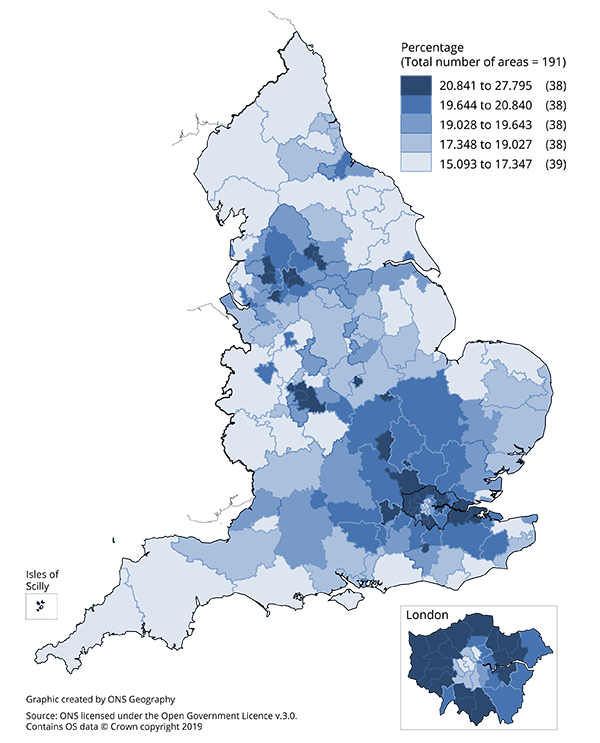 Wide variation in age structure of population across Parliamentary constituencies 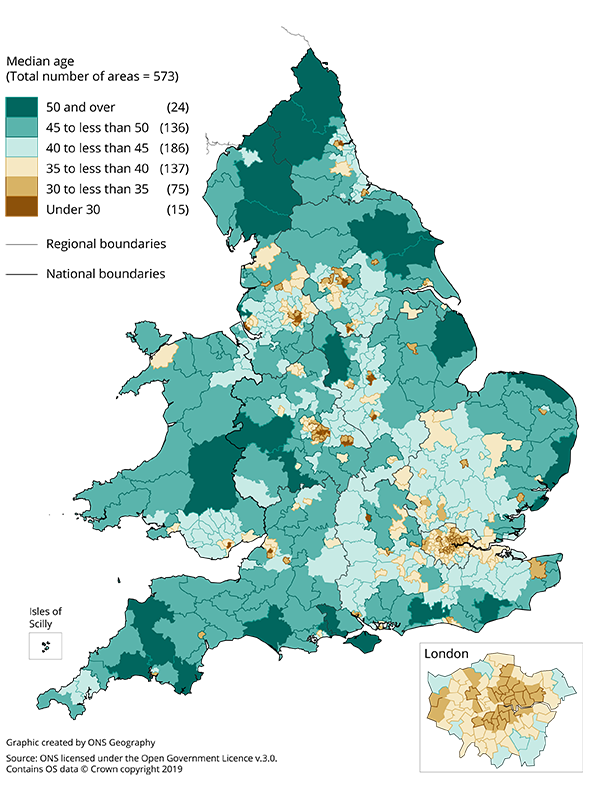 Electoral statistics, providing counts of the number of persons registered to vote in each Parliamentary constituency, are available.

Electoral wards are an important building block of UK administrative geography. They are the spatial units used to elect local government councillors in metropolitan and non-metropolitan districts, unitary authorities and London boroughs in England, and unitary authorities in Wales. In some unitary authorities in England, they are legally termed as “electoral divisions”, but they are frequently referred to as “wards” and are referenced as such throughout this bulletin. The five parishes of the Isles of Scilly are also treated as electoral wards for statistical purposes.

Electoral wards are subject to annual updates and boundary changes that make comparisons over longer periods more difficult. Mid-2018 population estimates are provided for 8,280 electoral wards in England and Wales as at 31 December 2018, excluding the 18 wards that do not meet the minimum population requirements for data confidentiality (40 resident households and 100 resident people in the 2011 Census). Electoral ward estimates are classified as Experimental Statistics.

National Parks are designated areas of protected countryside aimed at conserving the natural beauty, wildlife and cultural heritage of the area. Each National Park has a National Park Authority (NPA) responsible for conservation, planning, recreation management, and fostering the social and economic well-being of local communities. 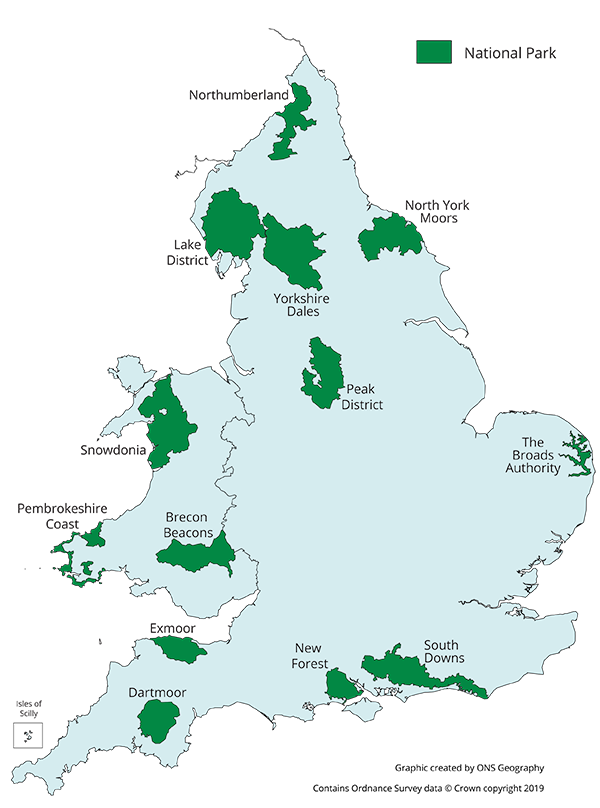 Download this image Figure 8: National Parks in England and Wales

National Records of Scotland (NRS) produces population estimates for Scottish data zones, which are slightly smaller areas than Lower layer Super Output Areas (LSOAs), designed to contain approximately 500 to 1,000 household residents. NRS uses a cohort component-based method to produce estimates for data zones. Further information on this methodology and the latest estimates for Scotland (for mid-2018) are available from their website.

The Scottish data zones are used to produce population estimates for a range of other geographies including Westminster Parliamentary constituencies in Scotland, Scottish Parliamentary constituencies and Nomenclature of Units for Territorial Statistics (the statistical geography used by the EU). These figures are available from the Special Area Population Estimates section of the NRS website.

Small Area Population Estimates across the UK provides a broad description of the different methodologies used to produce small area population estimates in each constituent country of the UK.

This statistical bulletin is part of our Population estimates by output area, electoral, health and other geographies, England and Wales: mid-2018. The publication includes:

These estimates are consistent with the results of the 2011 Census and are provided for the latest official geographic boundaries in place at the time of publication.

News on our population statistics can be obtained by subscribing to the quarterly newsletter (email your request to population.statistics@ons.gov.uk) or following the Twitter account @RichPereira_ONS.

Provision of data not already published may require bespoke analysis, and this service would be subject to legal frameworks, disclosure control, resources and agreements of costs, where appropriate. Please email your request to pop.info@ons.gov.uk. The latest charging rates can be found on the Office for National Statistics (ONS) website.

It is our mission to provide the best insights on population and migration using a range of new and existing data sources to meet the needs of our users. Our ambition is to deliver a fully transformed system by 2023, making regular improvements to our statistics along the way as more administrative data become available. We will rigorously quality assure new methods and share the impact of any changes made. The Transformation of the population and migration statistics system: overview gives more information on this work. The resulting improvements will also be incorporated into future editions of population estimates.

Small Area Population Estimates (SAPE) Evaluation: Report on Accuracy Compared to Results of the 2011 Census presents research that evaluates the accuracy of the small area population estimates to inform their broad variety of users. The report also fulfils the commitment to analysis planned after the 2011 Census.