This article compares experimental cash-based measures of real households disposable income and the saving ratio with the internationally comparable national accounts defined methodology, as published in the Quarterly Sector Accounts on 29 September 2017.

From 29 September 2017, the UK Economic Accounts now presents separate estimates for the households sector and the non-profit institutions serving households (NPISH) sector. Previously, these two sectors were presented as though they were one sector, households and NPISH. Within this article, a separate estimate will be presented for households (that is, for real households disposable income and the households saving ratio). This work is part of the scope of methodological improvements being introduced as part of “UK National Accounts: The Blue Book: 2017 edition” due to be published on 31 October 2017.

We published an article on 21 August 2017 to inform users of the indicative impact to the main non-financial and financial accounts estimates being introduced before revised figures for the UK National Accounts were published on 29 September 2017. Within this article, we published an indicative households only “cash” saving ratio, which shows the impact of removing NPISH data from the transactions included in the current “cash basis” methodology.

This is an experimental product and we are reviewing the methodology used to produce the cash measures of real households disposable income and the saving ratio. We welcome feedback from users about the future content of this article and publication tables and are particularly interested to know how you make use of these data to inform your work. Please email us with any feedback at sector.accounts@ons.gov.uk

Estimates within this release

Data within this article are estimated in current prices (also called nominal terms), with the exception of real households (and households and NPISH) disposable income (RHDI), which is estimated by deflating gross disposable income using the households (and households and NPISH) final consumption expenditure implied deflator. This deflator is used to remove the effect of price inflation to better reflect the real purchasing power of households in terms of the quantity of goods and services they would be able to purchase if prices remained constant over time.

Current price series are expressed in terms of the prices during the time period being estimated. In other words, they describe the prices recorded at the time of production or consumption and include the effect of price inflation over time. RHDI is a measure of the real purchasing power of households’ incomes, and it enables users to make comparisons of households’ disposable income over time.

All data in this article are adjusted for seasonality, unless otherwise stated. Seasonal adjustment removes seasonal or calendar effects from data to enable more meaningful comparisons over time.

Estimates of real households disposable income (RHDI) and the saving ratio published in the Quarterly Sector Accounts include transactions that are not directly observed by households.

For example, imputed rental represents the value of housing services that owner-occupiers derive from their homes. This is the amount that they would have to pay in rental to achieve the same consumption of housing services. Whilst this concept is important when measuring economic activity and in like-for-like international comparisons, it is not expenditure (or income) directly observed by homeowners. As a result, the national accounts measure of RHDI can differ from the perceived experience of households.

We therefore consider “cash RHDI”. This measure removes imputed rental and other imputed transactions resulting in a measure of RHDI that is a closer representation of disposable income as measured by social surveys. This is mainly achieved by following guidance within the Organisation for Economic Co-operation and Development Framework for Statistics on the Distribution of Households Income, Consumption and Wealth and the United Nations Economic Commission for Europe (UNECE) Canberra Group Handbook on Household Income Statistics.

We also consider a “cash” saving ratio. This measure removes imputed transactions from the use of disposable income account (the adjustment for the change in pension entitlements as well as imputed rental and financial intermediation services indirectly measured (FISIM) from the national accounts measure of final consumption expenditure), resulting in a measure of gross saving that reflects households’ saving (excluding pension contributions) in the respective quarter or year.

There are 11 transactions that are included in the national accounts calculation of GDI, but are excluded from the cash measure of GDI. These are:

Within the national accounts there are accounting identities, which mean that the values of some of the previously mentioned transactions net to zero:

Therefore, only the removal of the following six transactions explains the differences between gross disposable income on a cash basis and a national accounts basis:

Once we have calculated GDI, we use the households final consumption expenditure implied deflator to remove the effect of price changes to calculate real household disposable income (RHDI).

The saving ratio estimates the amount of money households have available to save (known as gross saving) as a percentage of their total disposable income (known as total available resources).

As a result of Blue Book 2017 changes, including the separation of the households and non-profit institutions serving households (NPISH) accounts and other method changes, RHDI on a cash basis follows RHDI on a national accounts basis much more closely.

New data sources and methods have caused this large upward revision in households sector income and, in consequence, a downward revision to non-financial corporation sector income. More information on this can be found in a previous article, Detailed assessment of changes to sector and financial accounts, 1997 to 2015. In particular, it highlights how the accounts better capture the income of the self-employed who have incorporated and receive income as dividends.

The rise in cash RHDI can be analysed in nominal terms by breaking down its main components. The rise in Quarter 2 2017 was due to a rise in nominal gross disposable income on a cash basis of £6.2 billion (2.4%).

This rise in nominal gross disposable income on a cash basis was primarily due to a fall in taxes on income and wealth of £2.6 billion, and a rise in wages and salaries of £2.0 billion.

The total value of the transactions excluded in the calculation of gross disposable income (GDI) on a cash basis was negative £0.2 billion; meaning that these excluded transactions had a negative effect on GDI on a national accounts basis. Non-life insurance claims was the main contributor, falling £0.3 billion in Quarter 2 2017.

A negative saving ratio on a cash basis, as seen in Quarter 1 2017, implies that households spent more than they earned in income during that quarter.

Quarter 1 2017 was the first quarter in which the households saving ratio fell below zero since Quarter 1 (Jan to Mar) 2008. This is in contrast with the previously published households and non-profit institutions serving households (NPISH) savings ratio on a cash basis, which saw 10 quarters below zero during the same period; most notably, three consecutive quarters of negative growth from Quarter 3 2016. 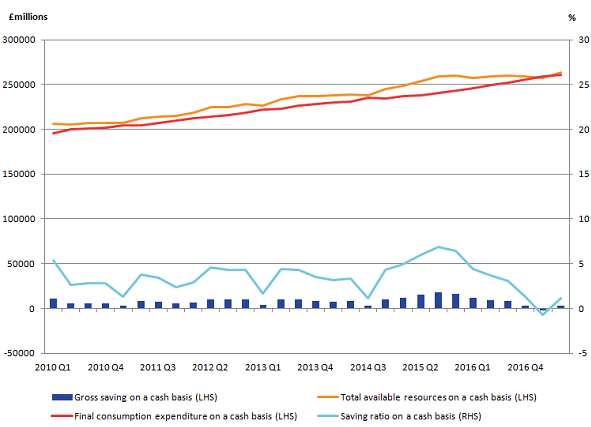 This difference is caused by changes in the value of transactions excluded from the calculation of gross savings in order to calculate it in “cash basis” terms.

Within the national accounts, there are accounting identities, which mean that changes in the value of some of the transactions presented in Table 1 net to zero. These transactions are marked with an asterix (*).

Therefore, it is only the removal of the other transactions presented in Table 1 that explains the difference between the saving ratio on a cash basis and a national accounts basis. In Quarter 2 2017, the value of the transactions excluded from the calculation of gross disposable income on a cash basis increased by £1.1 billion. The largest contribution to this increase was a rise in the adjustment for the change in pension entitlements (which is removed from the calculation of total available resources on a cash basis) of £1.3 billion.

Table 1 also contains the four letter series identifiers (CDIDs) that are presented in the accompanying dataset to this article to enable users to further explore the data and methodology used.

Table 1: Change in the value of transactions removed from the national accounts methodology to calculate the cash measure of gross disposable income and the saving ratio UK, Quarter 1 (Jan to Mar) 2017

Download this table Table 1: Change in the value of transactions removed from the national accounts methodology to calculate the cash measure of gross disposable income and the saving ratio UK, Quarter 1 (Jan to Mar) 2017