Young people not in education, employment or training (NEET), UK, methodology: May 2022

Explains how missing information for identifying someone as not in education, employment or training (NEET) is appropriated based on individual characteristics.

The Department for Education (DfE), Welsh Government (WG), Scottish Government (SG), and Northern Ireland Statistics and Research Agency (NISRA), already published statistics on young people who are NEET in the constituent countries. These were based partly or solely on estimates from the Labour Force Survey (LFS) or the Annual Population Survey (APS). Each department published estimates using different age groups and for different areas within the UK. This meant it was not possible for users to calculate the number and percentage of young people that are NEET for the UK at that time.

With the DfE, WG, SG and NISRA each producing estimates using differing methodologies and approaches, the ONS agreed jointly with them on a methodology to use to produce overall UK estimates. However, this total UK NEET figure does not replace the existing NEET estimates for the constituent countries of the UK. Ownership of estimates below the national level remains with the relevant body.

Within the Office for National Statistics (ONS) estimates, a person is NEET if they are aged 16 to 24 years and not in education, employment or training. A person is considered to be in education or training if they:

Therefore, anybody aged 16 to 24 years who is not in these forms of education or training and who is not in employment, is considered to be NEET. A person identified as NEET will always be either unemployed or economically inactive. Our definition of "in employment" follows that used for the official labour market statistics and is based on that recommended by the International Labour Organisation (ILO).

People not in the labour force (also known as economically inactive) are not in employment but do not meet the internationally accepted definition of unemployment because they have not been seeking work within the last four weeks and/or they are unable to start work in the next two weeks.

Employment measures the number of people in paid work, or those who had a job that they were temporarily away from (for example, because they were on holiday or off sick). This differs from the number of jobs because some people have more than one job.

Because of changes in the Labour Force Survey (LFS) over time, we use different versions of the syntax to create a time series. Also, prior to 2001 some variables are not fully populated on the current sets of LFS microdata because of changes in the way data were collected. This included a discontinuity in the education data in 1997 because of the change in how information about enrolment on courses was collected. These historical factors have led to some inconsistencies in the time series meaning that seasonal adjustment would not be appropriate prior to mid-2001. The Office for National Statistics (ONS) therefore, does not publish NEET estimates for periods prior to October to December 2001.

For the UK NEET estimate, we need to consider what to do when the survey information required to assess whether someone is NEET is missing. Missing data occurs when a respondent has not answered a question, or a response has not been recorded appropriately by the interviewer.

This is a particular problem with respondents who turn 16 years during their household's inclusion in the LFS, and who are then not interviewed as a 16-year-old. The solution agreed for the ONS UK estimate of young people who are NEET is to split the "missings" into the valid groups based on the proportions of cases without missing data. This is done within each category defined by age, sex and economic activity. An explanation of how the missing cases are apportioned and the values adjusted can be seen in Section 6.

The Office for National Statistics (ONS) publishes a quarterly bulletin, Young people not in education, employment or training (NEET), UK in February, May, August and November, along with accompanying datasets. It is published approximately a week after the labour market release.

The ONS does not publish any estimates of young people who are NEET below UK level. The sample sizes for lower geographies are small and therefore the estimates would not be reliable.

A completely harmonised publication strategy across the UK constituent countries has not been possible. While government departments and devolved administrations use a harmonised method for estimating the number of people who are NEET, different age groups and sources are used in their publications and analysis. Some also use academic age, the age of the respondent at the preceding 31 August, as opposed to actual age. The main difference that comes from using academic age rather than actual age is that it excludes 16-year-olds that are still in compulsory education. This results in different estimates of NEET figures being in the public domain.

The Office for National Statistics (ONS) does not publish any estimates of young people who are not in education, employment or training (NEET) below UK level.

Sub-national estimates of those who are NEET for England, Scotland, Wales and Northern Ireland are the responsibility of the relevant government departments and devolved administrations. Users requiring information at sub-national levels should approach the appropriate department or administration.

Estimates for each of the UK's constituent countries can be found on the following webpages.

Annual statistical publication reporting on learning, training and work activity of 16- to 19-year-olds in Scotland.

Young people not in education, employment or training (NEET)

Data for young people by age, gender, region and local authority from the Welsh Government.

Tables from the Labour Market Report, including Not in Education Employment or Training (NEET).

Figure 1: Part 1 - Deriving the not in education or training variable (NETDV) 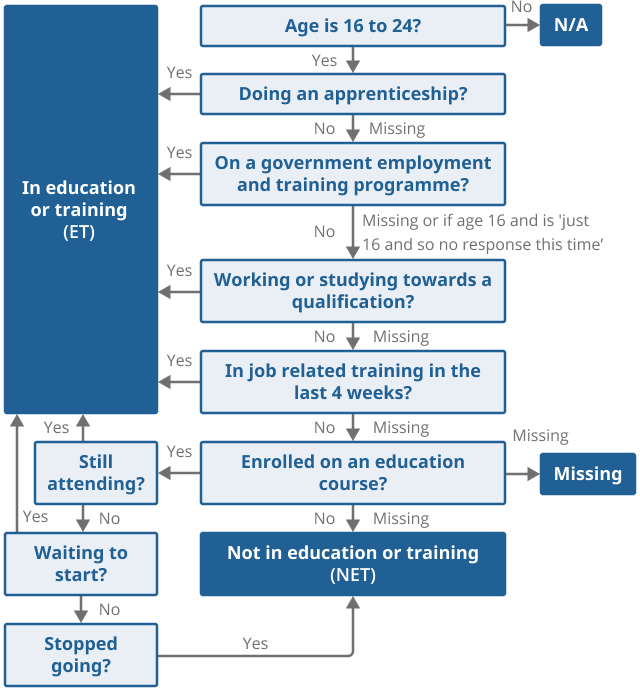 Download this image Figure 1: Part 1 - Deriving the not in education or training variable (NETDV)

A full derivation of the NEET variable is available in the LFS user guidance, Volume 4: LFS standard derived variables.

Next we select where people are aged 16 to 24 years, disaggregating by single-age and gender.

As will be described in Part 3, we need to calculate the numbers of young people NEET first by single-age and gender, and then combine to the age category required.

In education or training (ET)

Not in education or training (NET)

Education or training status is missing

This method produces outputs for young people in order to produce the following estimates:

Around 80% of missing cases at age 16 to 24 years are age 16 years and are "brought forward" cases. This is often where respondents recently turned 16 years and were not asked education or training questions in the previous wave and who are in non-responding households in the current survey period. These non-responders, who have provided neither their economic status nor education information, are classified as inactive as part of the standard derivation of economic status. Those with unknown education status are apportioned between both (1) and (2). This is, in part, because it is an established practice within labour market statistics to preserve additivity across series.

As educational and employment characteristics are related to age and gender, the apportioning will produce different numbers of those who are NEET if carried out in aggregate (all 16- to 24-year-olds) than if carried out for 16-year-old males, 16-year-old females, 17-year-old males, and so on. These NEET numbers are then combined for all 16- to 24-year-olds. For the Office for National Statistics (ONS) estimate this disaggregation is done at a UK level and not built up from countries or regions, for example, which would produce a different result.

For this reason, the harmonised NEET methodology has a convention that all apportioning of missing responses to education and labour market categories is carried out by single-age and gender and then added up to reporting categories.