"Headline inflation was unchanged with petrol prices rising by less than this time last year. However, the cost of entry to attractions such as zoos and gardens fell more slowly. After rising strongly since the middle of 2016, food price inflation now appears to be slowing.

"Factory goods price inflation continued to slow, with food prices falling in January. The growth in the cost of raw materials also slowed, with the prices of some imported materials falling. 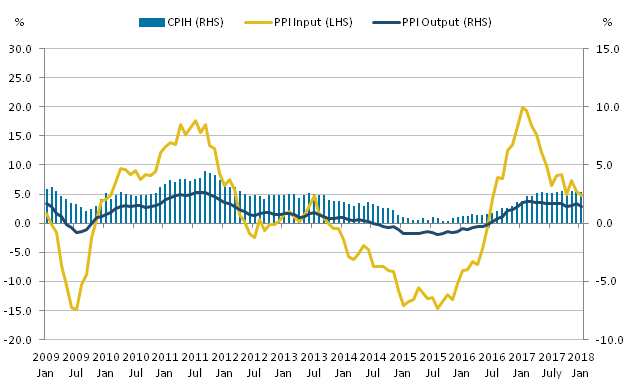 Previous economic commentaries have included analysis on the direct import intensity of the Consumer Prices Index including owner occupiers’ housing costs (CPIH) basket of goods and services (that is, the proportion of these items that have been imported). Using these estimates we can, for example, look at whether goods and services with higher import intensity are contributing more to the 12-month growth rate of CPIH following the movements in the exchange rate over the last couple of years.

This analysis results in a total import intensity estimate for each category in the CPIH basket. These goods and services, as previously, are then grouped together into the import intensity buckets used in Figure 21, which shows the contributions to the 12-month growth in CPIH from these buckets.

This month is the first publication of a new quarterly update for these CPIH-consistent inflation rates for different household groups, covering the period Quarter 1 (Jan to Mar) 2015 to Quarter 4 (Oct to Dec) 2017. More detailed analysis will be included in the annual update, to be published in May 2018.

Notes for: Including indirect imports in estimates of import intensity of CPIH

To investigate these increases from high import-intensive categories further, we can look at two of these groups in more detail: food and energy. Figure 3 shows 12-month growth rates for Consumer Prices Index including owner occupiers’ housing costs (CPIH), the food component of CPIH and the energy grouping in CPIH (which includes fuels and lubricants, electricity, gas, liquid fuels and solid fuels), as well as the inverted sterling effective exchange rate from January 2014 to January 2018. These data illustrate trends in the value of sterling (inverted), consumer price growth, and consumer price growth for food and energy respectively.

Since January 2015, trends in energy prices have followed a broadly similar trend to the sterling-inverted exchange rate but with a possible lagged effect as exchange rate changes take time to feed through into renewed contracts. Changes in world commodity prices and domestic pressures also exert considerable influence on the consumer price of energy. For example, the price of Brent crude oil in pounds sterling, which is a relatively volatile series, influences trends in the fuels and lubricants component of CPIH. Recently, it has been driven largely by changes in the dollar price rather than exchange rate effects.

Recent analysis has also highlighted the limited feed-through to consumer prices from wholesale gas and electricity prices (which are closer to world prices) and showed that in particular falls in wholesale and input prices were not translated into equivalent falls in consumer prices for gas and electricity. An independent Cost of Energy Review (PDF, 6.55MB) for the UK was published in October 2017, identifying that consumers’ electricity energy prices are higher than would be expected based on underlying costs and highlighting complex regulations, legacy costs and the structure of the market as likely explanations.

For the food component, the deflation from July 2014 to January 2017 may be due partly to the supermarket “price wars” in the UK over this period, which resulted in a downward pressure on food prices.

The growth in food prices seen in the UK in 2017 may be attributable partly to a further sterling depreciation between May and August 2017 feeding through gradually into consumer prices later in 2017. Food is a relatively import-intensive component with all classes within food having import intensity in the 25% to 40% category or 40% and over category, based on the new measure of import intensity including indirect imports. However, domestic conditions such as poor weather can also have considerable influence in consumer prices as seen from the supply and demand issues and rising input costs related to UK milk production in early 2017.

Figure 4 shows the inverted sterling effective exchange rate and six selected components of the input Producer Price Index (PPI). The price paths of the inputs, such as crude oil and metal goods, that are used to produce commodity-based manufacturing products have been trending more closely to changes in the exchange rate between January 2011 and January 2018 than prices faced by the producers of other parts and equipment. The UK input prices for these imported commodities reflect changes in both world prices and the exchange rate. 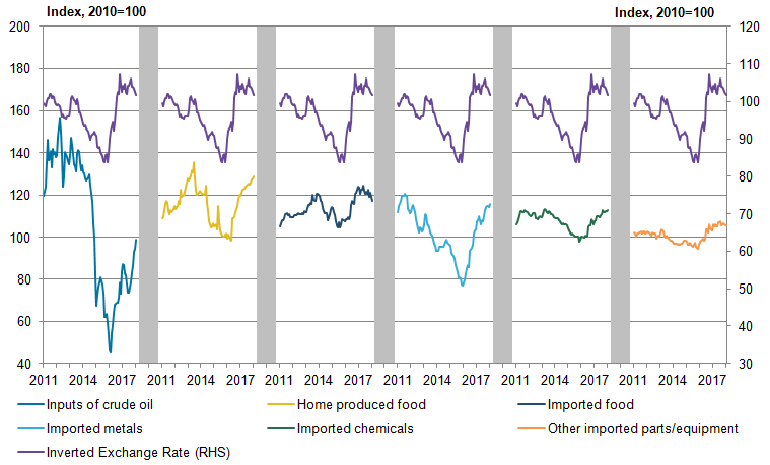 Crude oil inputs appear to trend with the exchange rate less than imported metals and chemicals as the world price of crude oil is relatively volatile and therefore accounts for more of the change in input prices over the period. Recent sharp increases in the prices of Brent crude oil reflect changes in the US dollar price feeding through into the sterling price. However, as imported inputs make up around two-thirds of the aggregate input PPI series the exchange rate has a relatively strong influence on overall input PPI.

Both imported and home-produced food seem to follow broadly changes in the exchange rate. This may reflect the nature of the food industry in the UK: these are products that can be fairly easily substituted between imports and domestic produce, and there is also limited scope to expand or reduce quickly domestic supply to meet changes in demand in the short-term.

In contrast, the price paths of the inputs used in the manufacture of other parts and equipment such as motor vehicles are seen to trend less with movements in the sterling effective exchange rate compared with other input PPI series. The manufacture of these goods uses a wider range of intermediate inputs than needed for the production of more commodity-based outputs. Overseas pricing strategy, competition and supply chain relationships as well as the exchange rate will therefore have a range of effects on input prices for these products and may be muting the relationship between these series and the effective sterling exchange rate.

Since mid-2016, the growth in average house prices in Great Britain fell sharply from 7.8% to a low of 4.1% in March 2017. The dip in March 2017 reflects a base effect from the peak in March 2016, which previous analysis has attributed to changes in Stamp Duty.

Growth in house prices has started broadly to pick up in the second half of 2017 for Great Britain excluding London, ending the year at 5.6% in December. This remains lower than the average growth rate of 7.1% for Great Britain as a whole between January 2014 and December 2016, which has been the case since August 2016. In contrast, growth in London house prices remained more subdued throughout the second half of 2017, ending the year at 2.5% in December. The October and November edition of the UK Residential Market Survey (PDF, 598KB) by the Royal Institution of Chartered Surveyors (RICS) attribute this sustained lower growth to a number of factors including uncertainty over the economic climate and increases in the cost of moving and selling.