Changes in the prices of goods bought and sold by UK manufacturers including price indices of materials and fuels purchased (input prices) and factory gate prices (output prices).

The factory gate price (output price) is the amount received by UK producers for the goods that they sell to the domestic market. It includes the margin that businesses make on goods, in addition to costs such as labour, raw materials and energy, as well as interest on loans, site or building maintenance, or rent.

The input price measures the price of materials and fuels bought by UK manufacturers for processing. It includes materials and fuels that are both imported or sourced within the domestic market. It is also not limited to materials used in the final product, but includes what is required by businesses in their normal day-to-day running, such as fuels.

Index numbers shown in the main text of this bulletin are on a net sector basis. The index for any industry relates only to transactions between that industry and other industries; sales and purchases within industries are excluded.

Indices relate to average prices for a month. The full effect of a price change occurring part way through any month will only be reflected in the following month’s index.

Each Producer Price Index (PPI) has two unique identifiers: a 10-digit index number, which relates to the Standard Industrial Classification code appropriate to the index and a 4-character alpha-numeric code, which can be used to find series when using the time series dataset for PPI.

Over the past 15 years, the input Producer Price Index (PPI) has experienced large peaks and troughs and strong overall growth, driven by global movements in prices for crude oil and commodities (Figure 1). Between May 2002 and May 2017, input prices increased 72%, mainly fuelled by crude oil prices that rose 127% over the period. Output prices increased 31% across the same period.

Comparing prices today with those prior to the downturn peak in June 2008, input prices were 1.1% lower in May 2017, while output prices were up 12.4% across the period.

The latest figures suggest an overall easing of input cost pressures in the manufacturing sector. In the 12 months prior to February 2017 prices rose every month bar one, which led manufacturers to raise prices for goods leaving the factory gate; however, recent month-on-month falls mean input costs overall are now below the level they were back in December 2016.

We have now also seen 3 months of falling prices month-on-month. The 1.3% month-on-month decline in May represents an acceleration of this trend and has led to price levels overall, as defined by the index value, being lower than they were back in December 2016 when the index stood at 106.5.

Table 2: Imported materials and fuels purchased and sterling effective exchange rate, index values, growth rates and percentage point change to the 12-month rate: May 2016 to May 2017

Download this table Table 2: Imported materials and fuels purchased and sterling effective exchange rate, index values, growth rates and percentage point change to the 12-month rate: May 2016 to May 2017

Home food materials and imported metal prices provided the second and third largest contributions to the annual rate, with 1.91 and 1.55 percentage points respectively.

The annual rate for home food materials, although positive for the past 13 months, fell to 13.1% in May 2017 (Table 3) from 25.0% in April, which was the highest annual increase since July 2008. The main contributors to the rise in home food materials were domestic products used in crop and animal production.

The annual rate of growth for imported metals has also fallen back from an all-time record high of 37.2% in January 2017. In May 2017, prices rose 21.1% on the year, although fell 2.8% on the month, which is the second monthly decline in prices since June 2016. The recent strengthening of sterling is the most likely factor for slowing growth. For further analysis on metal prices please refer to section 4 of the February Producer Price Inflation release.

Figure 3: Input PPI, contribution to change in the annual rate, May 2017, UK

Download this chart Figure 3: Input PPI, contribution to change in the annual rate, May 2017, UK

The latest figures suggest the recent period of rapidly increasing factory gate prices may have come to an end. The annual rate of inflation for goods leaving the factory gate was unchanged at 3.6% in May 2017 and has remained largely flat since January 2017. Month-on-month inflation slowed to 0.1% in May following increases of 0.4% in March and April.

All industries showed upward contributions to the annual rate. Food products had an annual growth rate of 5.6% (Table 5) and showed an upward contribution of 0.85 percentage points to the PPI output annual rate (Figure 4). The largest contributor to growth was dairy products, which increased 18.7% on the year. The annual growth rate for food products has been positive since October 2016, following 29 months of falling prices. For further analysis on food prices please refer to section 6 of this release and section 4 of the January Producer Price Inflation release.

Petroleum products provided the second largest upward contribution to the annual rate with 0.62 percentage points, driven mainly by an increase in the prices of diesel and gas oil.

Figure 5: Output PPI, contribution to change in the annual rate, May 2017, UK

Download this chart Figure 5: Output PPI, contribution to change in the annual rate, May 2017, UK

Figure 6: Annual rate of PPI factory gate inflation and contributions to the rate, May 2015 to May 2017, UK

Download this chart Figure 6: Annual rate of PPI factory gate inflation and contributions to the rate, May 2015 to May 2017, UK

Figure 6 shows the annual rate of factory gate price inflation along with contributions to the rate. Following the return to positive growth in July 2016, the rate increased month-on-month until January 2017. Since then the rate has been relatively flat, falling 0.1 percentage points to 3.6% in March and then remaining at that level.

However, while the headline rate has flattened since January, the balance of contributions across industries has changed. Falling prices within the coke and refined petroleum industry have been offset by rising prices from food producers and manufacturers of computers, electrical and optical equipment.

Figure 7: Annual rate of factory gate inflation for food producers and contributions to the rate, May 2015 to May 2017, UK 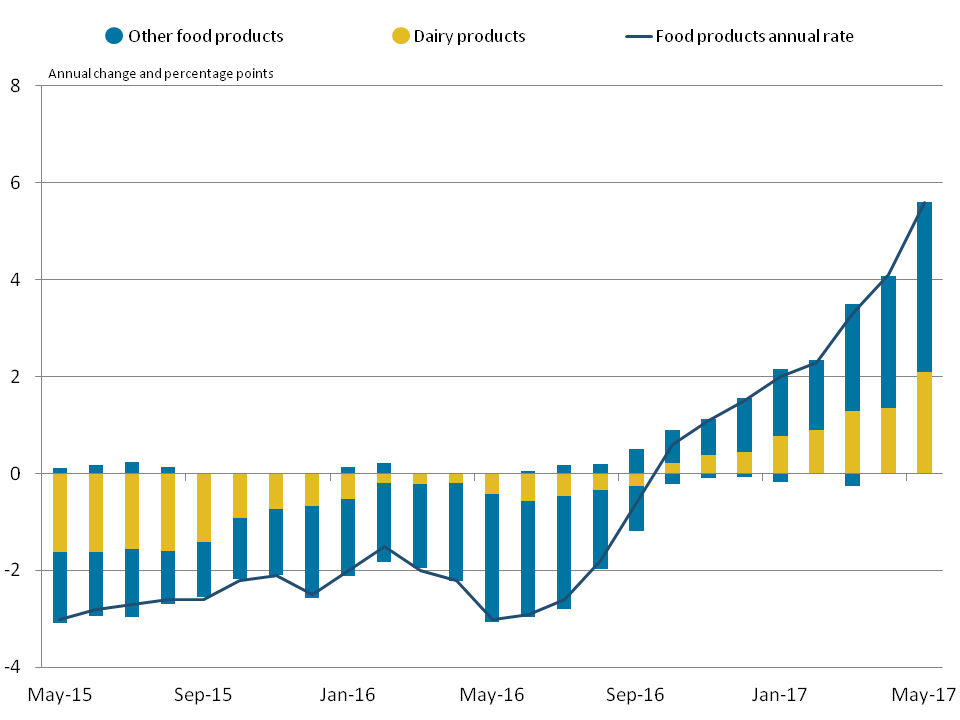 Download this image Figure 7: Annual rate of factory gate inflation for food producers and contributions to the rate, May 2015 to May 2017, UK

Figure 7 shows the annual rate of factory gate price inflation for food producers, along with the contribution to the rate from dairy products. Since November 2016, dairy products have been the largest contributor to the annual rate of inflation for food producers. In May 2017, prices were up 18.7% on the year and 4.7% on the month, the fastest rate of growth since June 2008 and October 2007 respectively.

The rise in prices for dairy products is mostly a result of supply and demand issues related to UK milk production, although rising input costs, particularly energy prices, might also be a factor. The same price pressures are also present across the EU, which may have put further pressure on UK prices. According to the latest figures from the Department for Environment, Food and Rural Affairs (DEFRA), UK milk production was down 3.2% year-on-year in the first quarter of 2017. The Agriculture and Horticulture Development Board (ADHB) put the fall down to poor weather and grazing conditions.

In terms of the EU, Eurostat reported that production of raw milk was down 2.3% year-on-year in the first quarter of 2017 and that prices in January 2017 grew at their fastest rate for 2 years.

The next largest factor offsetting falling prices in the coke and refined petroleum industry came from rising prices set by manufacturers of computers, electrical and optical equipment. This may be a result of higher input costs for electrical components following the overall devaluation of sterling over the past 2 years.

Please note that we have made some changes to the scheduled programme of sample improvement release dates that was announced in November 2016. The sample updates will be introduced in phases starting with updates to the Export Price Index (EPI) in July 2017 (June 2017 period).

The changes relate to when some of the sample updates for specific divisions are scheduled to be introduced; Table 1 (Sample Improvement Release Dates) within the November 2016 article, which can be accessed via the link above, has now been updated to reflect these changes.

In addition to the data included within this statistical bulletin, the following detailed datasets are available:

Higher, lower and equal movements for each Producer Price Index are shown in the PPI records.

A summary of the revisions to PPI data are available in the PPI revision triangles:

Other important measures of inflation and prices include the Consumer Prices Index (CPI) and the Services Producer Price Index (SPPI).

If you would like more information about the reliability of the data, a PPI standard errors article was published 20 March 2017. The article presented the calculated standard errors of the Producer Price Index (PPI) during the period January 2016 to December 2016, for both month-on-month and 12-month growth.

An up-to-date manual for the PPI, including the import and export index, is now available. PPI methods and guidance provides an outline of the methods used to produce the PPI as well as information about recent PPI developments.

Gross sector basis figures, which include intra-industry sales and purchases, are shown in PPI dataset Tables 4 and 6.

The detailed input indices of prices of materials and fuels purchased by industry (PPI dataset Table 6) do not include the Climate Change Levy (CCL). This is because each industry can, in practice, pay its own rate for the various forms of energy, depending on the various negotiated discounts and exemptions that apply.