Personal and economic well-being in the UK: August 2019

Estimates looking across both personal well-being (April 2018 to March 2019) and economic well-being (January to March 2019) in the UK. This bulletin is part of a new series on "people and prosperity" introduced in February 2019.

Figure 1: All measures of economic well-being have increased in the latest period up to March 2019

Download this chart Figure 1: All measures of economic well-being have increased in the latest period up to March 2019

As shown in Figure 1, all main measures of economic well-being increased in the latest quarter. Net financial wealth per head increased the most, at 3.0% compared to the same quarter a year ago. This was mostly driven by an increase in the value of equity and investment fund shares and pension schemes. It is worth noting that net financial wealth is more disproportionately spread out than income and other types of wealth. For the period between April 2014 and March 2016, for example, 61.4% of the total financial wealth of households was owned by the top 10%, according to the latest Wealth in Great Britain release.

Household spending per head also continued to increase – it grew consecutively for nine quarters and is at an all-time high. It should be noted that 43% of the latest quarter’s growth was driven by an increase in real terms spending on life insurance. However, it is unclear what drove this increased spending and whether it was linked to changes in mandatory cover requirements (such as cover for larger mortgages).

This was offset by a decrease in spending on restaurants and cafés, 1.7% per head less than for the last quarter. Our previous analysis looked at the relationship between household finances and personal well-being, and showed that expenditure on restaurants and cafés was related to higher life satisfaction. At the same time, spending on other services (such as life insurance) was associated with lower life satisfaction. Because of the potential impact on personal well-being, this change in expenditure patterns is something important to track in future well-being releases.

Figure 2: People in the UK report a slightly higher average happiness rating than a year ago

UK, average ratings of life satisfaction, feeling that the things done in life are worthwhile, and happiness for the years ending March 2012 to March 2019

Download this chart Figure 2: People in the UK report a slightly higher average happiness rating than a year ago

Although there were improvements in all measures of economic well-being, there was very little change in ratings of personal well-being. The only slight improvement in the year to March 2019 was in the average rating of happiness. Between the years ending March 2018 and March 2019, happiness scores increased slightly across the UK from 7.52 to 7.56, measured on a scale from 0 to 10 (Figure 2). This represents an increase of 0.53% in the average reported happiness across the UK.

In addition to looking at average ratings, we also monitor potential inequalities in personal well-being by comparing those rating each aspect of their well-being either at a “very high” or “low” level (Figure 3).

Figure 3: About 4.2 million people continue to report “low” levels of happiness in the year ending March 2019

Download this chart Figure 3: About 4.2 million people continue to report “low” levels of happiness in the year ending March 2019

Over the short-term, there were no changes in the proportions of people reporting either the highest or the lowest levels of happiness between the years ending March 2018 and March 2019. The slight improvement in the average happiness rating was driven by people reporting marginally higher scores in the middle range of the scale. Approximately 7.9%, or about 4.2 million people (out of a population aged 16 and over of nearly 53.1 million), continued to report low levels of happiness in the year ending March 2019.

Figure 4: The average anxiety in the UK remains flat in the year ending March 2019 with no significant decrease in the proportion of people reporting the highest anxiety ratings 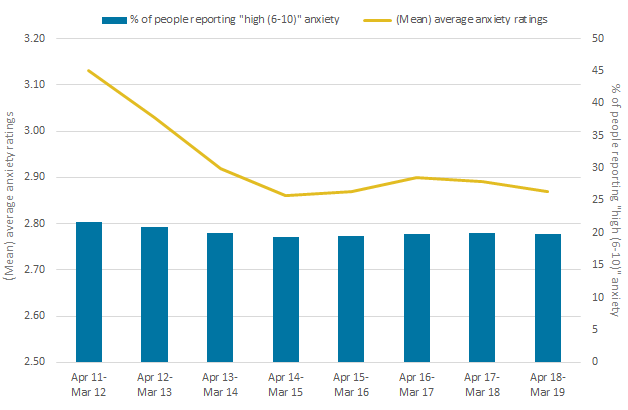 Download this image Figure 4: The average anxiety in the UK remains flat in the year ending March 2019 with no significant decrease in the proportion of people reporting the highest anxiety ratings

Looking at the long-term trend, average anxiety ratings continued to improve in the UK up to the year ending March 2015. After this period, anxiety ratings reached a plateau, with a small fluctuation year on year and no significant changes for the latest year up to March 2019.

Similarly to people’s happiness levels, also for this measure, there was no significant decrease in the proportion of people who reported the highest anxiety ratings and who might be struggling the most. As highlighted in our last release, about 19.8% or 10.4 million (out of a population aged 16 and over of nearly 53.1 million) people continued to report high levels of anxiety.

Figure 5: Expectations for the year ahead for unemployment trends and the general economic situation continue to decline

Download this chart Figure 5: Expectations for the year ahead for unemployment trends and the general economic situation continue to decline

As discussed in section 3, objective household finance measures have improved. This is reflected in people’s perception of their personal financial situation remaining positive. However, subjective expectations about the general economy continue to be negative:

Our users have expressed strong interest in additional analysis of well-being at local level. In the Autumn, we are planning to present estimates for the UK countries, regions and local authorities and to provide insights into how local circumstances might affect well-being, to enable better decision-making at local level. In November, we will be releasing the estimates looking across personal well-being and economic well-being in the UK for the period April to June 2019.

We also intend to focus more on the environmental aspects of well-being, both in terms of how the environment affects our living standards now and the extent to which growth is environmentally sustainable. In doing this, we will move a step closer to looking holistically at “people, prosperity and planet”.

In November 2010, we set up the Measuring National Well-being programme to monitor and report UK progress by producing accepted and trusted measures of the well-being of the nation. We have pioneered the measurement of well-being in the UK in addition to traditional measures of prosperity, enabling policy-makers to make better, more well-informed decisions. We have also been monitoring economic well-being by assessing how households are faring, using measures of household wealth and disposable income.

This release is based on the most recent data available as of August 2019. It is important to note that the data underpinning the personal and economic well-being indicators come from various sources with different timeliness and coverage.

The personal well-being estimates are from the Annual Population Survey (APS), which provides a representative sample of those living in private residential households in the UK. People living in communal establishments (such as care homes) or other non-household situations are not represented in this survey. This may be important in interpreting the findings in relation to those people reporting lower personal well-being. Most of the economic indicators capture the full coverage of the UK regardless of people’s economic status.

Weighting answers to survey questions ensures that estimates are representative of the target population. Each person in the survey data has a “weight”, the number of people that person represents in the population, which is used to produce estimates for the population.

In February 2019, alongside our previous publication, we launched a survey to gather user feedback about our personal and economic well-being outputs. Users told us that our work fitted their requirements well – the language used, analytical detail and visual analyses met their needs. But the feedback also highlighted ways in which we could improve the quality and usability of our outputs such as by shortening the length of bulletins. Additionally, there were requests to focus on more in-depth analysis, such as more insights into regional data and inequalities and providing more information or explanation of more technical aspects.

Over the coming months, we will continue to address feedback and engage further with our users to improve the usability and usefulness of our work. We also aim to better promote our well-being dashboard and explore opportunities to improve our interactive tools. Your feedback will be very valuable in making our results useful and accessible. If you have any questions, please contact us at PeopleAndProsperity@ons.gov.uk. Thank you!