This publication presents the results of the 2014-based population projections produced by the Office for National Statistics (ONS) for the UK and its constituent countries. These results were previously published in statistical releases 2014-based Statistical Bulletin on 29 October 2015 and 2014-based extra variants report on 26 November 2015. This volume is the latest in a regular series, which started in 1970, and brings together a summary of the results and details of the methodology into one compendium.

This volume includes some alternative summary charts and tables to those published previously. It also provides further detail of the projections methodology, some discussion around the trends which informed the assumptions and a range of related references for further background reading.

The following chapters are included:

The main points of the 2014-based population projections are:

The projection has the following features: 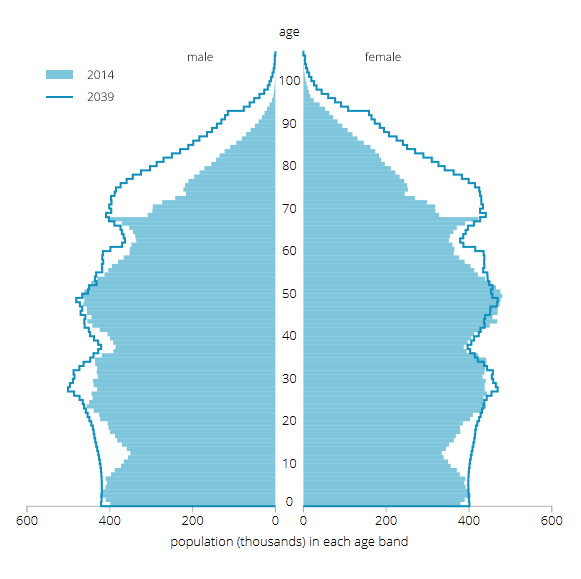 Due to differences in past and present demographic patterns, and those assumed for the future, projected trends differ for the 4 countries of the UK (see Table 0.2).

Table 0.2: Estimated and projected population of the UK by constituent country, mid-1981 to mid-2064

Download this table Table 0.2: Estimated and projected population of the UK by constituent country, mid-1981 to mid-2064

The national population projections are based on the latest available mid-year population estimates and a set of demographic assumptions about future fertility, mortality and migration based on analysis of trends and expert advice. The main assumptions for the UK as a whole are set out below.

The long-term assumption for net migration to the UK is +185,000 each year, compared with +165,000 per year in the 2012-based projections. This change reflects the most recent trends in international migration available at the time the projections were produced. A new method for setting and applying the cross-border (intra-UK) migration assumptions as rates rather than fixed numbers of migrants was introduced and applied for the 2014-based projections (see Chapter 5).