The 2014-based national population projections for the UK and its constituent countries were produced by the Office for National Statistics (ONS) on behalf of the National Statistician and the Registrars General of Scotland and Northern Ireland.

This chapter provides the background to the national population projections, including their history, purpose and availability. It describes the methodology used to produce the projections and provides an outline of the related projections available.

The projections are based on the population estimates as at 30 June 2014 and a set of underlying demographic assumptions regarding future fertility, mortality and migration. The assumptions were based on the best statistical evidence available at the time and were agreed in liaison with the devolved administrations – Welsh Government, National Records of Scotland (NRS) and Northern Ireland Statistics and Research Agency (NISRA) – following consultation with the main users of projections in each country and advice from an expert academic advisory panel.

The projections are the outcome of a calculation showing what happens if particular assumptions are made. As a forecast of the future population they would inevitably be proved wrong, to a greater or lesser extent. As well as not taking into account future government policies, there is uncertainty in the underlying data – for example, estimates of the current population or of past migration flows – on which the projections are based. In addition, there is inevitable uncertainty in the assumptions reflecting the inherent unpredictability of demographic behaviour. The latter reason means that projections become increasingly uncertain the further they are carried forward into the future. To give users of the projections an indication of this uncertainty, in addition to the principal (main or central) projection, a number of variant population projections have also been produced based on alternative assumptions of future levels of fertility, mortality and migration. These are discussed in the variants chapter.

We published the 2014-based principal and key variant projections on 29 October 2015, with additional variants released on 26 November 20151.

The first projections of the population of the UK were made by the Government Actuary’s Department (GAD) in the 1920s. One of the main uses of these earliest projections was in connection with long-term financial estimates under the Contributory Pensions Acts and other schemes of social insurance. Projections made since the war, however, have been increasingly used in all areas of government planning. New projections were produced each year from 1955 to 1979 and then every second year until 1991. There was then a 1992-based set and since then projections have resumed to being produced every second year.

Additional “interim” projections are occasionally produced. The 2001-based projections were published following the 2001 Census and an additional set were produced based on the 2003 estimates to incorporate revisions to the population estimates for England and Wales. Responsibility for the production of national population projections transferred to ONS on 31 January 2006.

This volume, the latest in a regular series which started in 1970, gives details of the 2014-based national population projections produced by ONS (based on the estimated population of mid-2014). These replace the 2012-based projections published on 6 November 2013.

As part of the production process for the 2004-based projections round, an expert academic panel was convened in 2005 to advise us on current and emerging demographic trends and their possible implications for the national population projections. An expert panel has met to discuss appropriate assumptions for each subsequent round of projections. The panel’s role is to advise only. Responsibility for final decisions on the assumptions remains with ONS and the statistical offices of the devolved administrations.

A note of the 2015 meeting of the expert panel is included in the 2014-based projections October release, in Appendix A of the Background and Methodology paper.

In October 2015, National Records of Scotland announced small errors in the mid-year population estimates (MYE) for areas in Scotland. Whilst these errors do not affect the total population of Scotland, or other parts of the UK, they do have a small effect on the age and sex distribution of the population. The impact of these errors is much smaller than the uncertainty around the estimates due to sampling error from the census. NRS will publish corrected MYEs in April 2016.

The 2014-based national population projections are based on the original release of the Scottish MYE in April 2015 and thus do not reflect the correction to the MYE for Scotland used as the base population for the projection. The errors will also have a small effect on the projected age distribution of cross-border migration flows from Scotland to England and Wales. These effects are very small compared to other sources of uncertainty in the projections.

Table 1.1 shows the estimates of the population at mid-2014 upon which the 2014 projections are based.

Table 1.1: Base population estimates for 2014-based projections

Download this table Table 1.1: Base population estimates for 2014-based projections

Estimates of the population aged 90 and over

The main focus of the 2014-based projections is on the next 25 years up to mid-2039, though longer-term projections to mid-2114 are also produced. Long-term figures should be treated with great caution since population projections become increasingly uncertain the further they are carried forward, particularly so for smaller geographical areas and age-sex breakdowns.

For more information on how our population projections meet user needs, along with information on their fitness for purpose, including strengths and limitations, please see the report on quality and methodology7.

The projections are made for successive years running from one mid-year to the next using the cohort component method.8 The starting population, taking into account net migration less the number of deaths, produces the number in the population, one year older, at the end of the year. Age is defined as completed years at the last birthday. To this has to be added survivors of those born during the year.

The number of deaths in a year is obtained by adding half of the net inward migrants at each age to the number in the population at the beginning of the year and applying the mortality rate qx. The mortality rates (qx) used in the projections represent the probabilities of death between one mid-year and the next, according to a person's age last birthday at the beginning of the period. The appropriate rate of "infant mortality", that is, the probability of a new-born child not surviving until the following mid-year is also given. This is about 85% of the full, first year of life infant mortality rate used in official statistics.

The principal projections are computed for each of the constituent countries of the UK and the results are added together to produce projections for England and Wales, Great Britain and the UK.

The fertility and mortality assumptions have been set using rates based on a consistent series of population estimates which reflect the results of the 2011 Census.

In the 2014-based projections, the method of projecting "cross-border flows" of migration between countries of the UK has changed from being based on assumed absolute levels to being calculated from assumed rates of migration based on an average of estimates for the previous 5 years. This change in methodology is described in full in Chapter 5. International migration assumptions continue to be set as a fixed number of migrants based on historical trends.

The projection process can be illustrated by means of a Lexis diagram (see Figure 1.1) where age is represented on the vertical axis and time on the horizontal axis. The life of an individual (or of a birth cohort), is represented by a diagonal line (or parallelogram) running from bottom left to top right. 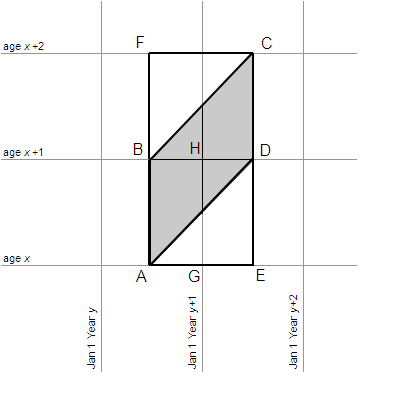 The number of deaths in a year is obtained by adding half of the net inward migrants at each age to the number in the population at the beginning of the year and applying the mortality rate qx. This produces the number of deaths in the parallelogram ABCD. Finally, there is the special case of projecting the number of infants aged 0 at mid-year y+1 as described above. So if x=0, the required population is represented by the line ED and it is therefore necessary to project births, deaths and net migration in the triangle represented by ADE.

The relationship between mx and qx

The mortality rates (qx) are given, for each individual age, in the data tables available on our website. However, in other statistical publications, and in the mortality chapter, mortality rates are often shown as central death rates (mx). These are obtained by dividing the number of deaths during a year at a given age by the average population at that age during the year (usually taken to be the population at the midpoint of the year). The relationship between qx and mx is shown by the following equation:

Note that this equation is an approximation as it assumes deaths occur evenly between exact age x and exact age x+1. It does not hold for infant mortality, as infant deaths are concentrated in the first few months of life.

The Department for Communities and Local Government (DCLG)14 published 2012-based interim household projections for England on 27 February 2015.

Population projections for other countries, carried out on a comparable basis, are produced by organisations such as Eurostat16 and the United Nations17.

Detailed results of the 2014-based national population projections for the UK and its constituent countries are available from our website. The results include the principal and variant projections for each country and a summary of the assumptions upon which they are based.

For each projection, the following datasets can be downloaded in Microsoft Excel format:

The projected population numbers are shown in thousands but stored to 3 decimal places (that is, to unit level). This does not imply that the projections are accurate to that level of detail. Results should always be presented in thousands.

In addition a number of open datasets are available in XML format. These have been published as part of the government’s open data agenda, mainly for modelling purposes. An open dataset is available for each country and variant combination and contains the underlying assumptions and projected figures for the 2014-based national population projections. Each file contains:

For the principal projection, figures cover the period mid-2014 to mid-2114. For the variant projections, files contain projected figures to mid-2039. Variant projections up to 100 years ahead can be requested from the Population Projections Unit.

The interactive population pyramids18 allow you to analyse the age structure of the population more easily. By animating the graph, you can compare the alternative projections and show how the population structure is projected to change over time.

An interactive article19 “How big will the UK population be in 25 years time?”, allows you to view trends in the principal and variant projections graphically to mid-2039.

Period and cohort life expectancy data20 derived from historic mortality rates (from 1981 to 2014) and assumed calendar year mortality rates from the 2014-based national population projections are also available on our website.