National population projections provide an indication of the future size and age structure of the UK and its constituent countries based on a set of assumptions of future fertility, mortality and migration.

“Over that period 54% of growth is projected to result directly from net international migration. The other 46% is because there will be more births than deaths.

“These projections suggest slower growth than the previous (2014-based) projections. This is because of lower assumptions about future levels of fertility and international migration, and an assumption of a slower rate of increase in life expectancy.”

The 2016-based national population projections provide statistics on the potential future size and age structure of the population of the UK and its constituent countries. We base them on the mid-2016 population estimates and a set of underlying assumptions about future fertility, mortality and migration. They supersede the 2014-based projections.

Population projections are not forecasts and will inevitably differ to a greater or lesser extent from actual future population change. There is already a margin of error in the underlying data – for example, estimates of the current population and past migration flows. In addition, our assumptions about the future cannot be certain as patterns of births, deaths and migration are always liable to change and can be influenced by many factors.

Two factors that may affect future population are political and economic changes but it is not possible to know in advance what impact these will have. On that basis the projections do not attempt to predict the impact of the UK leaving the EU. However, the projections of people of State Pension age do reflect future changes under existing legislation.

Projections inevitably become increasingly uncertain the further into the future they go. This bulletin focuses on the first 25 years of the projections, up to mid-2041. The data files include projections going forward 100 years, up to mid-2116. However, such long-term projections should inevitably be treated with great caution as much may change over that timescale.

Focusing on the 10 years between mid-2016 and mid-2026 (Table 1), the total projected growth for the UK is 3.6 million, or 5.5%. This represents an average annual growth rate of 0.5%. Projected growth varies substantially between the four nations of the UK: England’s population is projected to grow 5.9% over this period; for Northern Ireland the figure is 4.2%, while for Scotland and Wales the figures are 3.2% and 3.1% respectively.

Table 1: Estimated and projected population of the UK and constituent countries, mid-2016 to mid-2041

Download this table Table 1: Estimated and projected population of the UK and constituent countries, mid-2016 to mid-2041

Over the full 25-year period from mid-2016 to mid-2041 the proportion of growth resulting from the balance of births and deaths is projected to be lower, at 39%. This is mainly because the number of deaths is projected to rise as large numbers of those born in the baby boom immediately after World War 2 die later in the period.

Once the indirect effect is taken into account, international migration accounts for 77% of the projected UK population growth between mid-2016 and mid-2041. Because migrants are concentrated at young adult ages, the impact of migration on the projected number of women of childbearing age is especially important over this period.

International migration to and from the UK before the projection base year of 2016 will also influence future population growth, in the sense that past migrants and their descendants will contribute to the projected numbers of births and deaths. However, our assumptions of future fertility and mortality are based on past trends of all residents, irrespective of where they were born. 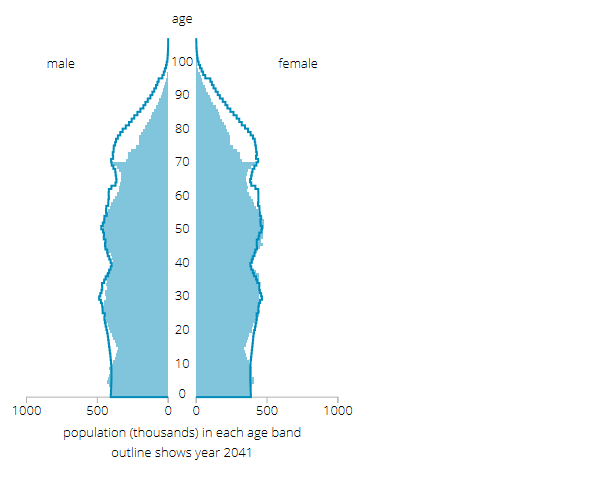 Download this image Figure 2: Age structure of the UK population, mid-2016 and mid-2041

The pyramid for mid-2016 includes more females than males at older ages, reflecting their higher life expectancy. The spike at ages 68 and 69 years reflects the baby boom after World War 2 and the wider area around age 50 years reflects the baby boom of the 1960s. The narrowing in the teenage years corresponds with the particularly low birth rates around the turn of the millennium.

In mid-2041 all these features are still present in the pyramid, with the peaks and troughs now located 25 years higher up the age scale. However, the numbers in each group have changed as a result of migration and deaths. The number of younger adults is similar to mid-2016 but there are more teenagers because we have assumed fertility rates will remain higher than they were around the year 2000.

The largest difference, however, is that in mid-2041 there are projected to be many more people at older ages. This partly reflects the 1960s baby-boomers now being in their 70s, but also the continued increase in life expectancy meaning that more people live to very old ages. In mid-2016 there were 1.6 million people aged 85 and over; by mid-2041 this is projected to double to 3.2 million.

Figure 3 shows the changing age structure by life stage – children, working age and pensionable age – taking into account the planned increases in State Pension age (SPA) to 67 years old for both sexes by 2028. The number of children (those aged 0 to 15 years) is similar in each year, but the numbers of people of working age and pensionable age are projected to grow.

The numbers of people in each life stage are important when considering dependency ratios, which inform government financial planning. A common measure is the Old Age Dependency Ratio (OADR), defined as the number of people of pensionable age for every 1,000 people of working age. This is projected to rise from 305 in mid-2016 to 370 by mid-2041. If SPA were to stay at mid-2016 levels the OADR in mid-2041 would be 442.

The 2016-based projections differ from the previous set, the 2014-based projections. This is partly because they are based on the population estimate from mid-2016 rather than mid-2014, as well as the latest data on births, deaths and migration. However, we have also changed our assumptions about the future. Full information is available in the supporting methodological documents but, in summary:

Table 2: Summary of changes to longer-term assumptions in UK projections, 2014-based and 2016-based

Download this table Table 2: Summary of changes to longer-term assumptions in UK projections, 2014-based and 2016-based

The European Union (EU) statistical office, Eurostat, publishes population projections for the current members of the EU. They are 2015-based and use different methods from Office for National Statistics (ONS). Eurostat projects that the UK population at the start of 2040 will be 75.0 million. This is substantially higher than our (2016-based) mid-2040 projection of 72.7 million.

Eurostat’s projections suggest that the total population of the current EU members will increase by 4% between 2015 and 2040, varying between 53% growth for Luxembourg and a 27% decline in population for Lithuania.

The United Nations (UN) also produces population projections. Their methods are different again, projecting a UK population of 73.1 million in mid-2040. This is a 12% increase on mid-2015, compared with a projected world population increase of 25% over the same period.

The UN’s projected increases for the world’s three most populous nations, also for the period mid-2015 to mid-2040, are 1% for China, 23% for India and 17% for the US. At opposite ends of the scale, Niger’s population is projected to grow by 150% while Latvia’s is projected to decline by 19% (the UN projects the decline in Lithuania will be a more modest 13%).

These comparisons demonstrate that projected population growth or decline varies considerably across the globe. It also shows that different methods can lead to substantially different results.

In conjunction with today’s release, National Records of Scotland and the Northern Ireland Statistics and Research Agency have published summaries of the projections for their countries:

Summary of projections for Scotland

Summary of projections for Northern Ireland

We have also published:

We will be publishing a small number of additional variant national population projections on 28 November 2017.

Our 2016-based subnational population projections for England, broken down to local authority and health authority level, are scheduled for publication in May or June 2018.

We have also published a number of other methodological documents, including a general background and methodology report, and more detail on fertility, mortality and migration.