Overview of the UK population: July 2017

An overview of the UK population, how it’s changed, what has caused it to change and how it is projected to change in the future. The UK population is also compared with other European countries.

The UK population figure in the first main point was incorrectly reported as 65.5 million and has now been corrected. We apologise for any inconvenience.

As a result of the ageing population the old age dependency ratio (OADR) is increasing. The OADR is the number of people over 65 years old for every 1,000 people aged between 16 and 64 years old – in mid-2016 the UK’s OADR was 285. It is a useful measure to understand how the balance in the population will change, particularly when planning for the needs of the different age groups.

We are aware there were some technical errors with the interactives (affecting Wales and Northern Ireland), these have been updated and are correct as of midday on 25 July 2017.

Knowing previous and projected proportions of the older age groups is interesting and useful for planning care and health provisions.

Aside from London only a few other local authorities have seen small changes in the proportion of people over 65 between 1996 and 2036. In 1996, only a handful of areas had over 25% of their local population aged 65 and over, most of these being in southern regions of the UK. By 2036, over half of local authorities are projected to have 25% or more of their local population aged 65 and over, again with many of the highest authorities being in southern England. In mid-2016 it was estimated that West Somerset was the highest at 33.3% and Tower Hamlets was the lowest at 6.0%.

Similar to the proportions of older people, the OADR has been increasing since 1996 and is projected to continue increasing. In 2016 only 11 local authorities had an OADR above 500; this is projected to increase to 62 by 2026 and 157 by 2036. By 2036 some authorities’ population aged 65 and over are expected to nearly match that of those aged 16 to 64, with West Somerset projected to have an OADR of 928.

The ageing population of the UK is influenced by many factors including mortality, fertility, health provisions and lifestyles.

Download this table Table 1: Age distribution of the UK population, 1976 to 2046 (projected)

The proportion of children in the UK population has declined from over 24.5% in 1976 to 18.9% in 2016. This proportion is projected to decline even further in future years.

The proportion of people aged 16 to 64 years has remained relatively stable over the last 40 years. Over the last 10 years it has started to decline and is projected to decline further in future years. This is a result of the growth in the population aged 65 and over.

Between 1976 and 2016 there was a 3.8 percentage point increase in the proportion of people aged 65 and over. It is projected to continue to grow to nearly a quarter of the population by 2046.

Improved healthcare and lifestyles, especially for those aged 65 and over, is the main reason for the increase in life expectancy.

Figure 2 shows old age dependency ratios (OADRs) as at 1 January 2016, collated by Eurostat from the European Union (EU) and European Free Trade Association (EFTA) countries. At this time, the UK’s old age dependency ratio was 284.  This was close to the OADR for all the selected European countries, which was 297. Italy (348), Greece (336) and Finland (329) have the highest ratios while Slovakia (209), Luxembourg (209) and Ireland (208) have the lowest. 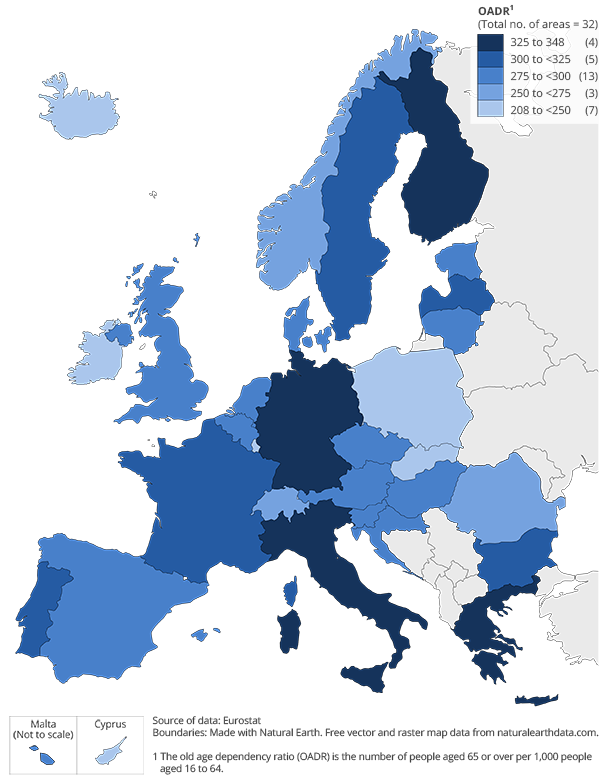 Download this chart Figure 3: UK population estimates and projections, 1960 to 2030

Following the relatively high population growth in the UK population during the baby boom of the 1960s, growth slowed during the 1970s. In the late 1980s, the population began to grow again when the 1960s baby boomers were having children, echoing earlier growth. Recent uplifts in population growth have generally coincided with an increase in the number of countries holding EU membership.

It is projected that the population will grow steadily, passing 70 million people in 2026 (Figure 3).

The interactive population pyramid (Figure 4) shows the age and sex of the population by local authority. Several events have affected the structure of the UK population in 2016, including:

The shape of the population by age was broadly similar for males and females in both 2006 and 2016. At older ages women outnumber men; this is particularly evident in those aged 80 and over.

The population pyramid (Figure 4) is interactive so allows you to make comparisons across 10-year periods between 1996 and 2036 for different areas in the UK.

We are aware there were some technical errors with the interactives (affecting Wales and Northern Ireland), these have been updated and are correct as of midday on 25 July 2017.

Figure 4 shows that the age structure of the population can vary quite a lot between different regions. For example, in 2016 London boroughs have high proportions of young people whereas southern coastal areas have higher proportions of older people. Some neighbouring local authorities can differ greatly as well. In 2016 the profile of Southampton has large proportions of younger people, particularly aged 19 to 26 years, which differs greatly from that of the New Forest which has larger proportions of people aged around 50 and 70.

There are four factors that drive change in the population size; births, deaths, immigration and emigration.

Natural change is the difference between births and deaths. Over the last 60 years the number of births in the UK has been greater than the number of deaths. As a result of this natural change, the population has grown (Figure 5).

The long-term trend in the number of deaths is more stable than the number of births. The number of deaths peaked in 1976 at 681,000 (the only year since 1955 to outnumber live births) before steadily declining until 2011. This decline is because people are living longer. More recently deaths began to slightly rise again, until 2016, where deaths decreased to 597,000.

These trends can also be explored in the interactive population pyramids (Figure 4).

Natural change has seen an increase in the population but the main driver of the growing population, particularly since the 1990s, can be attributed to net migration. Net migration is the number of immigrants (people moving to the UK for more than 12 months) minus the number of emigrants (people leaving the UK for more than 12 months).

As shown by the widening of the population pyramid from 2006 to 2016, migrants tend to be aged 20 to 36 years, an age when people are likely to be working.

The population of the UK is constantly changing and is projected to continue changing in the coming decades. With lower birth rates and higher life expectancy, the shape of the UK population is transforming. Whilst longevity is something to celebrate, the proportion of those of a working age is shrinking whilst those of a pensionable age is increasing. While a larger population can increase the size and productive capacity of the workforce, it also increases pressure and questions the sustainability to provide social services such as education, healthcare and housing.