Provides the latest available evidence to better understand what international students do after their studies.

This article updates on our progress towards developing a better understanding on student migration to and from the UK since the November 2016 update.

ONS and other government departments are working together on a continuing programme of research to better understand what international students do after their studies and this article provides an update on progress made since the last published update in November 2016.

Latest provisional figures3 show that in the year ending September 2016:

If all international students emigrated from the UK after their studies and immigration for study was remaining at similar levels, then we’d expect the immigration and emigration figures to be similar. Therefore, there’s a demand for more detailed information to explain the difference between these two flows.

Notes for: About this article

Our work since November 2016 has looked at:

There is, however, no single data source that records all possible outcomes for international students after they’ve completed their studies, which can answer the question “what do students do after their studies if so few are emigrating?” However, for non-EU national students (around 70% of total student immigration), data are published in the Home Office Immigration Statistics Quarterly Release on grants of extensions to stay by visa category and nationality. Additional analysis is available from the Home Office publication “Statistics on changes in migrants’ visa and leave status: 2015” (formerly known as “The Migrant Journey”), which shows how non-EU nationals changed their immigration status, and the immigration routes used prior to achieving settlement in the UK.

Home Office data1 also provide information on the numbers of non-EU nationals previously on a study visa who switched their visa type for work, family or other (non-study). Therefore, it’s possible that some of these former students also appear in the IPS departure figures.

Does this help explain the “gap” between the immigration and emigration figures for students? It will help explain some of the gap. However, it can’t fully explain the gap because the number of students completing their courses in any particular year won’t match the numbers immigrating unless immigration levels are steady and all courses are the same duration, which isn’t the case. Therefore, if precise figures were available on all outcomes of those students who have finished their studies, there’s likely to still be a gap (and in some years the immigration figures could be theoretically lower).

Notes for: Our research so far

Figure 1 shows the different outcomes for non-EU international student immigrants after they’ve completed their studies. It shows where data sources are available; where they’ll become available; and the outcomes for students that may not be possible to measure with existing or planned data sources. It is provided for illustrative purposes only, since the inter-relationships between these sources are often complex and some students may appear on more than one overlapping source.

During 2017, we will continue working closely with other government departments to assess and develop new analyses based on administrative data sources. This includes:

In addition, in collaboration with the Centre for Population Change and Universities UK, we’ve launched an online international student survey to provide further information on international students’ post-study intentions; how sure they are of these intentions; their travel patterns whilst studying; use of public services; and working patterns whilst studying.

We will continue to identify how sharing, linking and exploiting other sources of data can help produce more detailed analysis of the impact of international migration on the economy and public services.

We plan to publish a further update in August 2017 to include the provisional results of this experimental work.

Figure 1: Outcomes of non-EU international student migrants who arrived for study in the UK for 12 months or more 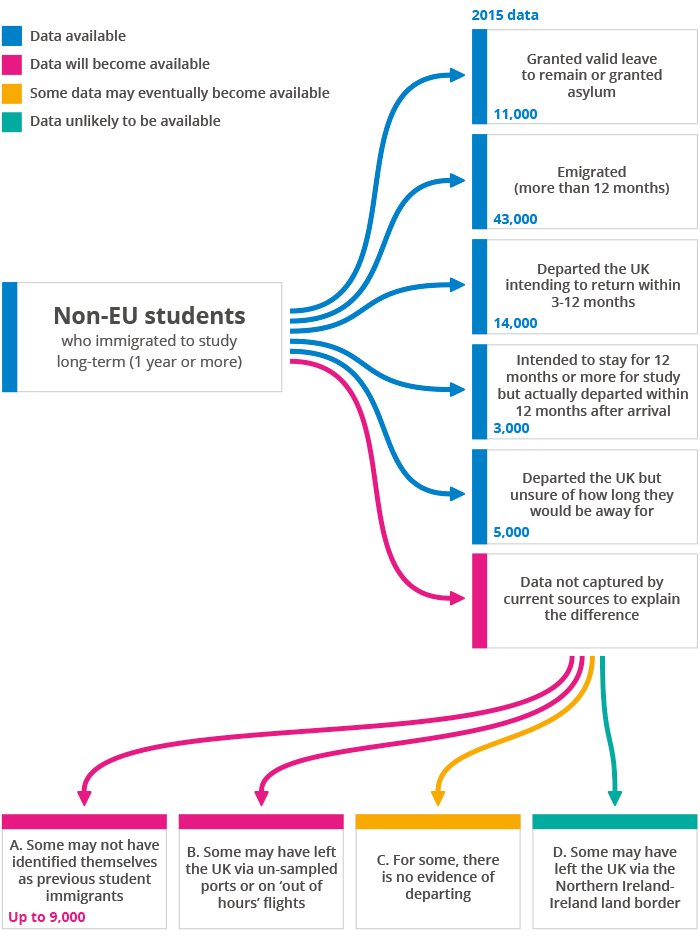 Download this image Figure 1: Outcomes of non-EU international student migrants who arrived for study in the UK for 12 months or more