International migration and the changing nature of housing in England – what does the available evidence show?

A summary of information about international migration, population change and changes in housing trends in England.

Immigration to the UK and how it influences housing and local areas is a complex subject. The extent of this influence is dependent on how reactive housing supply is to changes in housing demand. For example, if more new migrants rent, this would bring into use properties that were not previously used or under-occupied. In addition, internal migration from one part of the UK to another (for example, to London or the South East) is likely to continue to generate demand and respond to changes in international migration. There are a range of further factors, mentioned in this section, which could also affect prices and rents. This means it is not possible to directly infer impact from the data we report on in this article.

Migrant characteristics will influence the demand for different types of housing; for example, how long they spend in the UK, their rights to access housing in the social rented sector, whether they are working or studying, and how much they earn. Their housing choices in terms of tenure will also have an effect and these choices are likely to change the longer they remain living in the UK3.

This article mostly considers international migrants from the perspective of their country of birth, because it allows us to look at the longer-term patterns of tenure, rather than focusing solely on current foreign nationals. However, it should be noted that some of those born abroad will have always been British citizens, have acquired British citizenship in the intervening years, or lived in the UK for the majority of their lives. Further information on the relationship between country of birth and nationality can be found in 2011 Census analysis: Social and Economic Characteristics by Length of Residence of Migrant Populations in England and Wales.

This article draws on data from the 2001 and 2011 Censuses, as well as calendar year data from the Annual Population Survey (APS) for 2011 to 2016. Housing data presented in this article are for England only, as housing is a devolved policy area in Wales, Scotland and Northern Ireland.

UK, EU and non-EU are the main country of birth groupings used in this article; Annex 1 shows which countries are included in these groupings across different data sources.

The Office for National Statistics is grateful to Government Statistical Service analysts in the Department for Communities and Local Government and the Home Office for their contributions to this article.

One of the many factors likely to influence changes in housing demand in England is population growth. England’s resident population increased by 11% between 2001 (49.4 million) and 2015 (54.8 million)1. Population change varies between regions. The following interactive maps (Figure 1) show overall population change between mid-2011 and mid-2015 alongside each component of population change.

These maps show that local authorities in London have experienced some of the largest increases in population between mid-2011 and mid-2015; this growth has been driven by both international migration and natural change, which have been slightly offset by negative net internal migration.

These data show how international migration has increased the population of England and is likely to have also increased the overall demand for housing. However, it should be stressed that this relationship is indirect, because population increases contribute to housing via household formation and household size. Migrants who live together, for example, in a house share, will create a lesser housing demand than those living separately.

Average household sizes do not show whether a household is living in a dwelling with enough space for all household members. Occupancy ratings provide a measure of whether a household's accommodation is over or under-occupied and can be based on the number of rooms or bedrooms in a dwelling. Data from the 2011 Census7 show that households with EU and non-EU born HRPs are more likely to live in over-occupied accommodation than households with UK born HRPs and this varies by region. Tenure and age should be considered when analysing occupancy ratings by country of birth of HRP, since these are also likely to be related to occupancy.

Notes for: International migration has contributed to population growth in England in recent years 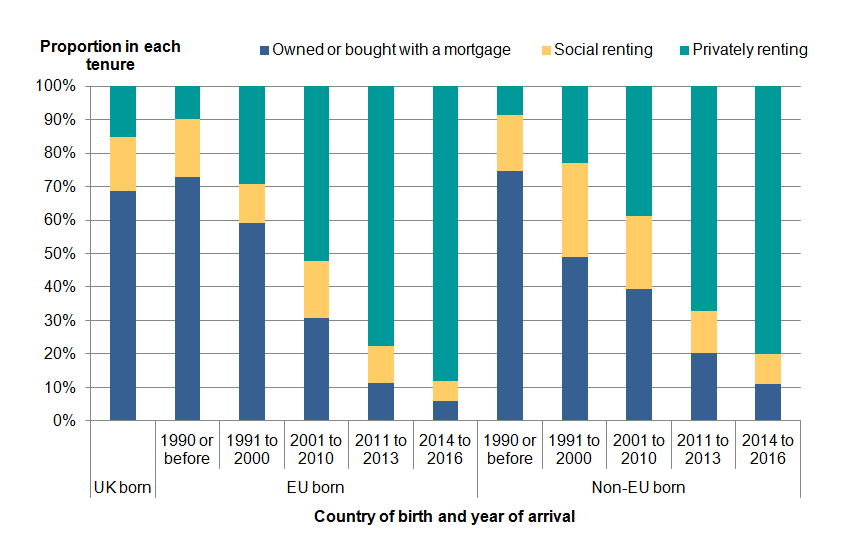 Download this image Figure 2: Proportion of UK, EU and non-EU born residents by housing tenure and year of arrival, England, 2016

Notes for: More recent migrants are more likely to privately rent than live in social housing or own their own home

Figure 3 shows the number of residents across the three main housing tenures by country of birth1 between 2001 and 2016. In 2016, two-thirds of UK born residents lived in housing owned or bought with a mortgage (69%), compared to a little over half of EU born residents living in privately rented housing (52%). Non-EU born residents tended to live in either privately rented housing (34%) or in housing owned or bought with a mortgage (47%). These figures need to be treated with care, as they can be affected by a number of factors, including the availability and affordability of housing in parts of the country where migrants have tended to settle. In addition, differences in tenure by year of arrival (as analysed in section 4) could mean that the proportion of immigrants renting rises because more of those immigrants arrived recently. 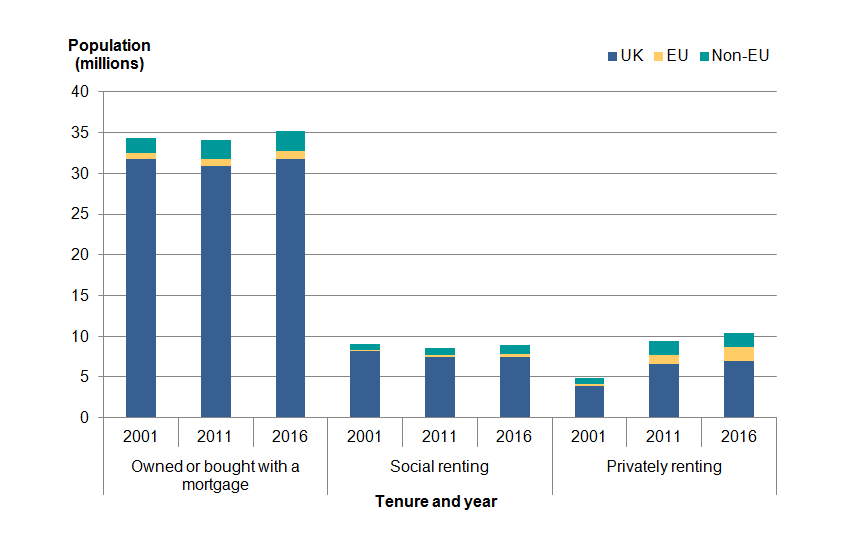 Download this image Figure 3: Estimated population of UK, EU and non-EU born residents by housing tenure in England, 2001, 2011 and 2016

Over time, Figure 3 shows that:

It should also be noted that changes in tenure over time are also influenced by length of stay in the UK (as shown in analysis by year of arrival) and age, as older residents are generally more likely to own their homes than younger residents.

The English Housing Survey (EHS) provides further evidence of these patterns. It shows that the size of the privately rented sector, in terms of number of households, more than doubled between 2001 and the year ending March 2016, from 2.1 million to 4.5 million households. The privately rented sector accounted for 10% of all households in 2001, compared with 20% of households in the year ending March 20162.

Notes for: Changes in housing tenure for UK, EU and non-EU born residents

As with changes for England overall, there are a number of factors that influence changes in housing tenure by country of birth at the regional level. Any recent impact on housing is likely to be seen more in areas with larger recent changes in population than those areas with historically higher levels of immigration and broadly reflect where recent migrants have tended to live.