Labour productivity fell by 0.4% in Quarter 1 (Jan to Mar) 2018 on the previous quarter, reflecting low output growth (0.2%) coupled with stronger growth in jobs (0.6%) and unchanged average hours. Despite this fall in quarterly growth, compared with the same quarter a year earlier output per hour worked has grown by 0.9% for three quarters in a row. This rate of growth is below that experienced prior to the downturn, which averaged around 2%.

On an output per worker basis, labour productivity was 0.4% down on the quarter and 0.1% lower than the same period in 2017. Both measures remain well below the levels they would have achieved had productivity growth continued at the pre-downturn rate (Figure 1).

Differences in growth between output per worker and output per hour are driven by changes in average hours worked – output per hour is our preferred measure of labour productivity because it accounts for increases (decreases) in labour input that come through increases (decreases) in the average number of hours worked. Accounting for these changes is particularly important in long-term analyses, as average hours have changed substantially over the past four decades (Figure 2).

While some temporary falls in average hours can be largely attributed to one-off events – such as the extra bank holidays to mark the Millennium or the 2011 Royal Wedding – short-term movements in average hours can be affected by many factors. While some of these (such as regular bank holidays) can be accounted for by seasonal adjustment, others (such as weather and cultural events) cannot. Future analysis will seek to inform users on which specific factors may (and may not) account for the recent fall in average hours.

Alongside these estimates of labour productivity growth for the whole economy, we have also published updated experimental quarterly and annual estimates of public service productivity as part of this release.

These measures – which differ from measures of labour productivity by taking account of changes in a range of factor inputs, including labour and capital – show that in Quarter 1 (Jan to Mar) 2018, productivity for UK public services increased by 0.5%. This growth, on the back of 0.3% growth in the previous quarter, was the result of a 0.2% rise in output, while total public service inputs fell by 0.4% over the quarter. As a result, total UK public service productivity is now higher than its previous peak in Quarter 3 (July to Sept) 2016.

When compared with the same quarter a year ago, productivity for UK public services increased by 1.1%, reflecting a rise of 0.7% in output coupled with a fall of 0.4% in total public service inputs.

Businesses that declare trade in goods were on average about 70% more productive than businesses that did not, and about 20% more productive after controlling for size, ownership and industry – although there remains a great deal of variation; Figure 4 shows the distributions of labour productivity at businesses by the amount of trade they declare. Businesses with some trade in goods declarations accounted for around 40% of all employment in 2017. However, most of these businesses are small and most trade is concentrated in a few businesses: the 50 largest exporters accounted for 38% of UK exports in 2016. 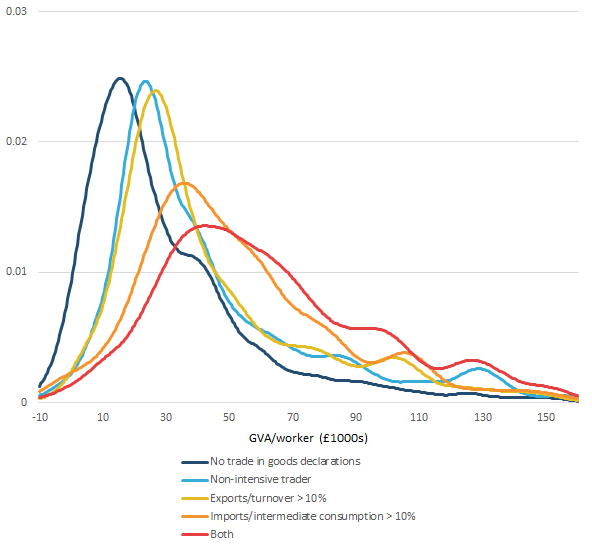 Finally, this is your opportunity to let us know your thoughts on our plans for future improvements and analysis on productivity statistics. Responses can be sent via email to productivity@ons.gov.uk.