Please note this message is an update to the correction notice posted on 15 April to provide further context.

This article provides an update to data for the experimental Alternative measures of Real Household Disposable Income and the Saving Ratio: December 2015 that was published on 9 February 2016. In that article we presented an update to the adjusted measure of real households and non-profit institutions serving households (NPISH) disposable income and the saving ratio which estimated disposable income less the parts that are imputed and unobserved by households.

Following user feedback, this article compares experimental cash based measures of the real household disposable income and saving ratio with the National Accounts defined methodology as published in the Quarterly National Accounts.

The data within this article are consistent with the Quarterly National Accounts published on 31 March 2016.

However, by adjusting GDI to remove the effects of price inflation, we are able to estimate another useful measure of disposable income called real households disposable income (RHDI). This is a measure of the real purchasing power of households and NPISH incomes, in terms of the quantity of goods and services they would be able to purchase. We use the households and NPISH expenditure deflator to remove the effects of price inflation.

The measure of RHDI published within the United Kingdom Economic Accounts (UKEA) contains elements which, despite being required for compiling a sequence of national accounts, are not directly observed by households.

For example, imputed rentals represent the value of housing services that owner occupiers derive from their homes. This is the amount that they would have to pay in rent to achieve the same consumption of housing services. Whilst this concept is important when measuring economic output, it is not expenditure directly observed by home owners. As a result the national accounts measure of RHDI can differ from the perceived experience of households.

We therefore consider ‘”cash RHDI”. This measure removes imputed rental and other imputed components resulting in a measure of RHDI which is a closer representation of disposable income as measured by social surveys. This is mainly achieved by following guidance within the Organisation for Economic Co-operation and Development Framework for Statistics on the Distribution of Households Income, Consumption and Wealth and the United Nations Economic Commission for Europe (UNECE) Canberra Group Handbook on Households Income Statistics.

Figure 1 shows the percentage change of real households disposable income per head on a national accounts basis and a cash basis, quarter on quarter, Quarter 1 (Jan to Mar) 1998 to quarter 4 (Oct to Dec).

3.1 Making adjustments to the saving ratio

Following the cash RHDI approach, the components of the saving ratio were also assessed on whether they would be directly observed by households and then certain components were removed to create a cash saving ratio. For the cash saving ratio on a net interest basis the components removed were the adjustment for the change in pension entitlements , imputed rentals of owner occupiers and charges for financial intermediation services indirectly measured (FISIM) from households and NPISH final consumption expenditure (see Annex A).

During these periods expenditure exceeded income. This can occur either by drawing down existing savings or by borrowing. Prior to 2009 there was an increase in consumer debt and in particular mortgage debt and such increases are likely to have had an impact on falling saving ratios during this period.

Between Quarter 1 (Jan to Mar) 2008 and Quarter 3 (July to Sept) 2010 on a national accounts basis, and between Quarter 1 (Jan to Mar) 2008 and Quarter 2 (Apr to June) 2009 on a cash basis, the saving ratio rose sharply. The saving ratio on a national accounts basis peaked at 11.9% in Quarter 3 (July to Sept) 2009, and peaked at 5.7% on a cash basis in Quarter 2 (Apr to June) 2009. During this time, households experienced greater economic and financial uncertainty which typically results in households decreasing expenditure and increasing their level of saving. 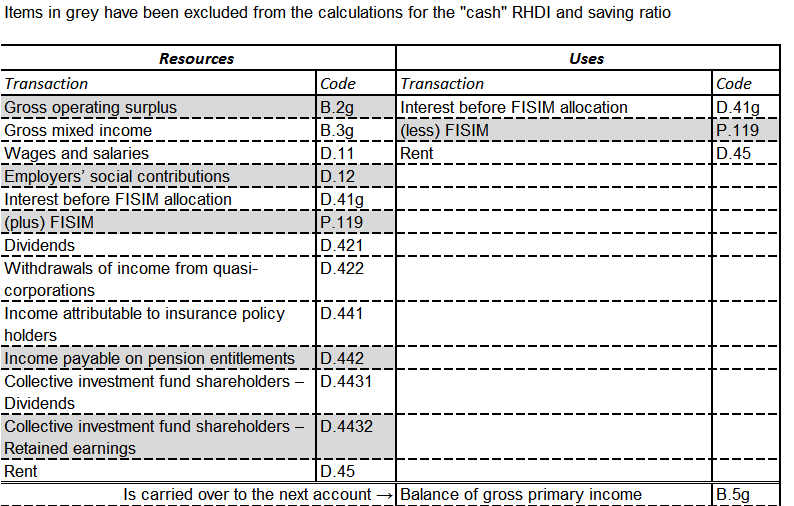 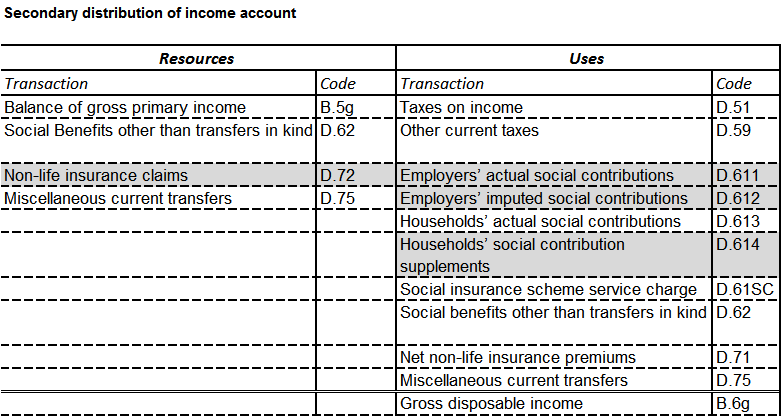 Gross operating surplus (B.2g) – This is comprised almost entirely of imputed rental, a national accounts concept which captures the value to owner-occupiers of living in their own home. This is not expenditure that households would see on a bank statement and is therefore excluded.

Employers’ social contributions (D.12) – This refers to the contributions made by employers towards social insurance schemes held by their employees. This is excluded is it not seen by households until they draw their pension, which falls under a separate transaction.

FISIM (resource and use) – FISIM, or financial intermediation services indirectly measured, refers to charges made by financial corporations acting as intermediaries which are implicitly included in the interest rates offered on loans and savings. Within the national accounts FISIM adjustments are made to return these implicit charges back to households, however, as these charges are real, the adjustment is excluded from cash RHDI.

Income payable on pension entitlements (D.442) – This comprises the earnings which arise from the investment of “technical funds” held by pension providers. These earnings are not actually seen by households as they are returned to the pension fund later in the accounts and as such have been excluded from the cash measure of RHDI.

Non-life insurance claims (D.72) – This refers to the funds received by households when making claims on non-life insurance policies. Whilst within the system of national accounts these are treated as current transfers, within social survey sources these sorts of transfers are not normally captured as income and have therefore been excluded from cash RHDI (See Canberra Group Handbook).

Households and NPISH social contribution supplements (D.614) – Excluded as this is the use counterpart to D.442 which was excluded above.

Adjustments to transactions which calculate the saving ratio

Adjustments for the change in pensions (D.8) – The saving ratio calculated in this analysis excludes this adjustment as it is not something that is directly observed by households as saving. This adjustment adds back in the amount that households have paid into pension schemes net of any payments they have received from these schemes. This is because the contributions that households make to pension schemes are effectively a form of saving whilst the benefits received from these schemes effectively reduce savings.

This article is part of a developmental product and we are currently exploring options for the future content of this publication and would welcome your feedback.