How data for corporations' receivables and payables can be devised.

This article describes early progress made to estimate the value of other accounts receivable or payable in the UK economy using company account data.

Other accounts receivable or payable are the financial assets and liabilities that arise due to a timing difference between when a transaction takes place and a corresponding payment is made.

This work is part of the UK’s Enhanced Financial Accounts (also known as flow of funds) initiative, which is a partnership between Office for National Statistics (ONS) and the Bank of England (the Bank).

We have ambitious plans to transform our economic statistics over the coming years, informed by our Economic Statistics and Analysis Strategy and with the aim of increasing the robustness and quality of UK economic statistics. Working in partnership with the Bank of England, an important element of our transformation work is the development of enhanced financial accounts – in particular more detailed “flow of funds” statistics – to meet evolving user needs.

Other accounts receivable or payable are the financial assets and liabilities that arise due to a timing difference between when a transaction takes place and a corresponding payment is made. There are two goals for this in the context of the Enhanced Financial Accounts initiative (EFA); to improve the quality of other accounts receivable or payable in the national accounts and to provide policymakers and the public with an improved understanding of the performance of UK companies.

In most cases, company accounts report the value of what a company is owed and what it owes to others, but not specifically who it is going to receive money from, or pay money to. Moreover, company accounts are generally produced on an annual basis, whereas we require data on a quarterly basis. This means it will not be straightforward to use company accounts to produce “whom to whom” statistics.

Figure 1 shows national accounts sectors (areas of the economy) and transaction type (means of moving money). The proposed improvements to the estimates of other account receivable or payable have an impact on the darker (blue) areas highlighted. Within the European System of Accounts (ESA) financial asset classification, other accounts receivable or payable are classified as transaction type F8 and are both assets and liabilities. While all sectors have the potential to hold other accounts’ receivables or payables, our focus is on those sectors within which organisations will submit company accounts. 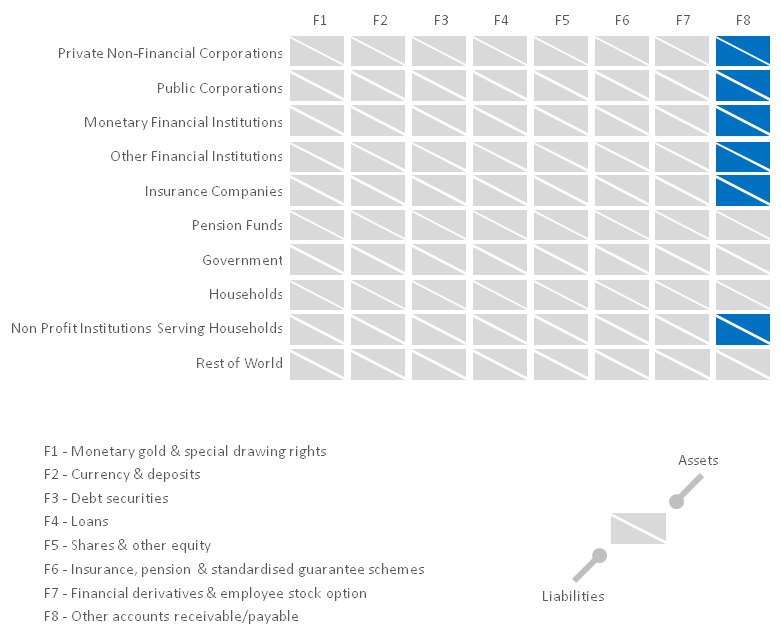 Other payables are monetary amounts, which are due to be paid at a future point in time. Examples include trade payables (goods that a company has purchased but not paid for yet) and Value Added Tax (VAT) liability (VAT that a company owes but hasn’t paid yet).

Other accounts receivable or payable are recorded within financial transaction type F8 in line with the European System of Accounts – ESA. Other accounts receivable are assets and other accounts payable are liabilities. The amounts are recorded within F8 and the asset and liability components are identifiable within the UK National Accounts Blue Book publication. Within the national accounts, receivables and payables are further split into trade credits (F81), which relate to the purchases of goods and services, and other receivables or payables (F89), which relate to timing differences.

The International Monetary Fund (IMF) has identified other accounts receivable or payable as an important element of assets and liabilities. Under their Special Data Dissemination Standards Plus initiative, countries are required to report on accounts receivable or payable to help build up a complete picture of assets and liabilities.

In meeting the aims of the Enhanced Financial Accounts initiative, we would ideally want levels of other accounts receivable or payable split by each sector of the economy and understand the “whom to whom” flows between each sector. As a minimum we would look to improve the quality of information on accounts receivable or payable across sectors of the economy highlighted in Figure 1.

The national accounts balance sheet requires monetary values for other accounts receivable or payable. The purpose of a balance sheet is to itemise assets and liabilities at a point in time, therefore company balance sheets are the natural data source in terms of completeness of information and would take account of revaluations. However, there are challenges around frequency of reporting which we discuss in section 5. We have identified three main data sources of balance sheet data, which are Companies House, Bureau Van Dyke (BVD) and HM Revenue and Customs (HMRC).

At present, companies have the option to file in paper format to Companies House. Accounts submitted on paper can be viewed in pdf format.

Bureau Van Dyke (BVD) is a data provider that uses information and data filed at Companies House as well as other data in the public domain. BVD formats all data sources and puts this information into an accessible format.

Many companies still file their accounts on paper. BVD processes the summary variables from all company accounts, including those companies who have filed their accounts on paper and formats this onto their software platform. BVD data would not contain all the detailed note information that Companies House data includes. However, the data are in a more accessible format for analysis purposes than Companies House data and includes additional intelligence BVD has gained from the public domain.

In determining the most appropriate source, we considered the granularity of information available from each source, the theoretical degree of complexity involved in deriving estimates from the source and the timeliness of the source.

Our preferred data source is HMRC. This is because it would give the most detailed breakdown for the greatest number of companies. Companies House data may be abbreviated depending on entity size and BVD data would not contain all the detailed note information. HMRC data is in a format that would enable data processing and analysis to be conducted efficiently. We will consider the potential of other data sources to address the timeliness issues with HMRC data.

There are three main challenges that will need to be overcome in deriving estimates of other accounts receivable or payable from company accounts. These relate to the:

Assets could be impaired (value reduced) by one party, which would not be reflected by adjusting the liability of another. The party who holds the receivable asset could make an adjustment for the likelihood for not receiving the total amounts due and therefore reduce a receivable asset value on their balance sheet. The corresponding (liability) counter party would still have the obligation to settle their obligation regardless of the assets holder’s opinion and therefore would retain the value to fulfil their obligation to repay the debt. Therefore the liability holder would report the liability due and the asset holder would have reduced (impaired) the value reported.

The accounting framework used by a company is disclosed within its company accounts. We will be able to use this information to understand where assets and liabilities don’t match and from this ascertain whether the size of differences is material in nature. If this is the case, we will use this information to help us and develop modelling approaches to address this issue.

National accounts produces data on a quarterly basis; whereas company accounts are produced on an annual basis. Consideration would need to be given for balance sheet changes over the course of the accounting period and calendar year. Therefore a method to obtain quarterly balances, where annual balances are currently produced would be required.

There are two approaches that could be made to resolve this issue should we wish to use company accounts data. The first is to use a rolling average approach (using the balance sheets from the last four quarters). The second approach would be to estimate balances based on company activity available on a quarterly basis (for example, turnover). In theory, the rolling average approach would be easier to implement and would require less estimation, but may not produce robust estimates of the balance sheets of new companies and those going through significant change. The company activity approach assumes a link between company activity and balance sheet. Both of these methods would have to be developed and tested.

A further approach would be to consider the use of surveys to gain the information on a quarterly basis, either to supplement or use instead of company account information. While the use of surveys is outside the scope of this article, this is an option we will consider as part of the Enhanced Financial Accounts initiative.

In the national accounts, valuation needs to be reported at nominal value. This means that, for large and medium-sized companies, estimates of nominal value would have to be calculated. This could be achieved through conducting a study of historic company account information to assess common practice and using this as the basis for deriving an estimation method. Fair value adjustments for current assets and current liabilities may be deemed immaterial due to the short-term maturity of the instruments. This information may be contained within notes of some company accounts, but this will need to be tested.

This article describes early progress made to estimate the value of other accounts receivable or payable in the UK economy using company accounts data.

While there are differences between the ways that other accounts receivable or payable are recorded in company accounts and defined in the national accounts, these are not large and the underlying principles are aligned. This means that company accounts data are potentially a suitable source for measuring other accounts receivable or payable in the national accounts.

Data sources from Companies House, Bureau Van Dyke (BVD) and HM Revenue and Customs (HMRC) have been considered. Companies House data is the timeliest, but contains limited information for smaller companies and is not formatted for analytical purposes. BVD takes Companies House accounts and processes the accounting data so that it can be analysed more easily. HMRC data is more detailed and complete, but with the weakness of being less timely (though all three data sources suffer from timeliness issues).

These timeliness issues could be overcome through estimation. Companies House and VAT data from the sales and purchase of goods and services could be used as the basis of an estimation method. This would need to be developed and tested.

We are currently working with HM Revenue and Customs to determine whether access can be given to the necessary data to further our investigation into the improvement of our estimates of other accounts receivable or payable. Once we have access to these data, we will assess its quality and develop the approaches to using these data and addressing the challenges outlined in section 5. Our current working assumption is that we will get access to these data in the first part of 2018.

We welcome your thoughts on the contents of this article and whether there are other avenues of investigation that we should pursue.

24 February 2016 Article – Improvements to the Sector and Financial Accounts

The author would like to acknowledge the following contributors to this article: Richard Campbell, Stuart Deneen, Phillip Lee and Bob Richards.