Introducing the plan for the UK's enhanced financial accounts (flow of funds), setting out the vision, and the outcomes we hope to achieve.

We have ambitious plans to transform our economic statistics over the coming years, informed by our Economic Statistics and Analysis Strategy and with the aim of increasing the robustness and quality of UK economic statistics. Working in partnership with the Bank of England, a key element of our transformation work is the development of enhanced financial accounts – in particular more detailed “flow of funds” statistics – to meet evolving user needs.

Assessment of events leading to the last financial crisis drew attention to an urgent need to improve the quality, coverage and detail of financial statistics, to better support financial stability and prudential analysis. Counterparty information (‘whom-to-whom’ statistics) on stocks and transactions in the financial accounts (the ‘flow of funds’) was identified as a particular need. This can help to assess the build-up of financial risks across economic sectors, and to better understand their interconnections. It is of particular importance to the UK, with its large and international financial sector, that good quality, detailed financial statistics are available to drive the robust analyses required by policy-makers, economists and market analysts.

The development of enhanced financial statistics has become an increasing priority for the UK over the past few years. The National Statistics Quality Review of National Accounts and Balance of Payments (Baker, 2014) recommended the implementation of flow of funds matrices into the National Accounts. More recently, the Independent Review of UK Economic Statistics (Bean, 2016) articulates the need for more detailed and complete flow of funds statistics to address established statistical limitations. This is supported by the International Monetary Fund’s (IMF) G20 Data Gaps Initiative Phase 2 (DGI) – a set of 20 recommendations on the enhancement of economic and financial statistics. The recommendations for the enhanced financial accounts for the UK are consistent with, and go further than, the recommendations of the G20 DGI.

This article sets out what flow of funds is, and why it is important to the UK. It introduces the enhanced financial accounts, the proposed approach and progress so far, and sets out the priorities for development.

‘Flow of funds’ is the flow of money (financial investment) between various sectors of the economy. Financial flows have been published by both the Bank of England (the Bank) and ONS and its forerunners since the 1960s, as the UK’s financial accounts.

At present, the financial accounts are published as total assets and total liabilities, by sector and instrument, with little counterparty information. One of the key aims of the enhanced financial accounts is to introduce full whom-to-whom information, so that for each instrument, both the sector holding the asset and the sector incurring the liability are presented. This should better assist policymakers to see when and where risk is beginning to build within the financial system.

Analysis following the last financial crisis highlighted the need for close monitoring of financial flows both within the UK economy and at the global level, and the requirement for improved statistics to address that need. These have a wide range of applications, including informing monetary and financial policy and the assessment of financial stability through the identification of the build-up of risks in specific areas of the financial sector. In particular, the crisis showed the importance of monitoring the composition of balance sheets with an eye on mismatches (maturity, currency, etc) as well as the interconnections between the different sectors and sub-sectors of the economy.

The key objectives for the UK’s enhanced financial accounts are to:

The ambition is that this can be obtained mainly from administrative, regulatory and commercial record-level data sources. However, it is likely that surveys will continue to be required to complete the coverage of all financial instruments across the UK economy, where non-survey data are not available.

Figure 1: The size of the financial sector: total financial assets as a percentage of nominal GDP, 2014

Download this chart Figure 1: The size of the financial sector: total financial assets as a percentage of nominal GDP, 2014

Around 40% of global foreign exchange trading is transacted in the UK, showing the international importance of the UK financial system. Analysis by the Bank of England (the Bank) shows that foreign banks account for a large proportion of UK banking sector assets on a residency basis. At the end of March 2016, there were 147 deposit-taking foreign branches and 92 deposit-taking foreign subsidiaries in the UK from 56 different countries.

One of the policy responses to the financial crisis around the world was to put greater emphasis on the importance of macro-prudential policy. Macro-prudential policy aims to reduce the risk and macroeconomic costs of financial instability. It seeks to fill a gap between macroeconomic policy and microeconomic regulation by looking beyond the safety and soundness of individual firms to risks to the financial system as a whole that might occur because of the combined behaviour of, and in particular the interconnections between, individual firms and markets. In the UK, the Bank of England’s Financial Policy Committee was set up to oversee the Bank’s objective for maintaining financial stability.

Developing high-quality UK flow of funds statistics is crucial to policy makers such as the Bank. These would enable a more effective analysis of financial stability risk, and would help to prepare more effective policy to alleviate these risks.

Figure 2 presents a visual representation of the proposal for enhanced financial accounts for the UK based on a sectoral breakdown. It highlights where these data are already published by ONS in the recently introduced flow of funds chapter of the Blue Book and where they are not already published but will be extended to 11 sectors in 2017.

In terms of the enhanced financial accounts, ONS and the Bank of England are proposing a substantial expansion of the financial corporation sub-sectors, particularly with respect to non-money market investment funds. The additional granularity here is essential in identifying the build-up of risks in the financial sector.

A split of private non-financial corporations into commercial and non-commercial real estate companies is also proposed, including a further breakdown of these corporations by size into small and medium-sized, and large companies.

Figure 2: Proposed sector breakdown with comparison against current publications, and improvements planned for 2017 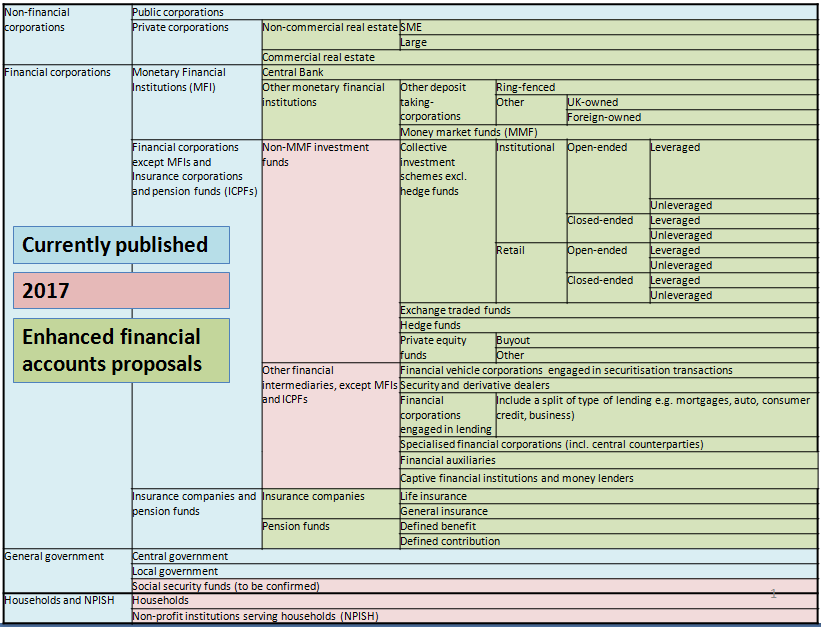 Download this image Figure 2: Proposed sector breakdown with comparison against current publications, and improvements planned for 2017

Delivering the enhanced financial accounts sector breakdowns listed in Figure 2 across the 37 financial assets and liabilities required in ESA10 is an ambitious aim. Our ability to deliver the full breakdown will depend on the availability of suitable source data.

ONS’s preferred approach is to achieve full whom-to-whom financial accounts and balance sheets from record-level (ideally non-survey) data. This allows much greater flexibility to evolving requirements for granularity than surveys do, as new breakdowns can be created from different cuts of the same data.

Experimental statistics will be released at the earliest opportunity, on an incremental basis before full implementation into the national accounts. This will give users early sight of developments and an opportunity to offer feedback, but it means there are likely to be inconsistencies between experimental and official statistics until the changes are fully implemented.

Although surveys, which have traditionally been used by ONS, have the advantage that information on the exact concept required can be asked on questionnaires, the use of non-survey data has 5 key advantages:

Where non-survey data are not available, surveys will continue to be used to complete any gaps. This approach, of predominantly using non-survey data, should allow more fine-detailed financial statistics to be produced. For example, the ambition is to produce:

Progress to date has been very positive. In July 2015, an article providing an introduction to UK flow of funds was published on the ONS and Bank of England websites. The article included the publication of counterparty estimates for balance-sheet levels of loans as experimental statistics.

This was followed by a second article in November 2015, which completed the first stage of the project. The article presented, for the first time, a set of experimental statistics covering the currently available whom-to-whom statistics for the UK, together with an assessment of their quality. This quality assessment represented the most comprehensive review of the financial accounts for many years.

Since then the project has been responsible for the publication of improved historical financial accounts data in January 2016, and also for a series of improvements that were implemented in the UK Economic Accounts (UKEA) in June 2016, and were described in articles published in February, April and June 2016.

An article identifying sectoral interconnectedness in the UK economy was published in March 2016. This article included innovative interactive visualisations of the UK’s sector-to-sector interactions for financial balance sheets by financial instrument, based on the experimental statistics published in November 2015.

The following questions and areas have so far been identified as priorities by the Bank of England (the Bank), wider users of ONS financial statistics and the IMF’s Special Data Dissemination Standard plus (SDDS+) and G20 Data Gaps Initiative (DGI). These cover not only domestic flows and balance sheets, but also the UK’s interaction with the rest of the world:

Development of these statistics would answer the following questions:

Feedback and comments on these priorities are welcome at FlowOfFundsDevelopment@ons.gov.uk.

Table 1 presents a prioritisation matrix for the issues listed above, with an assessment by policy and user interest (both national and international). ONS, working in partnership with the Bank, will continue to validate these priorities with users as the project progresses. Figure 3 represents these priority areas by sector and instrument.

Figure 3: Summary of priority areas for the enhanced financial accounts, by sector and instrument – priorities are in the green cells, marked with an x 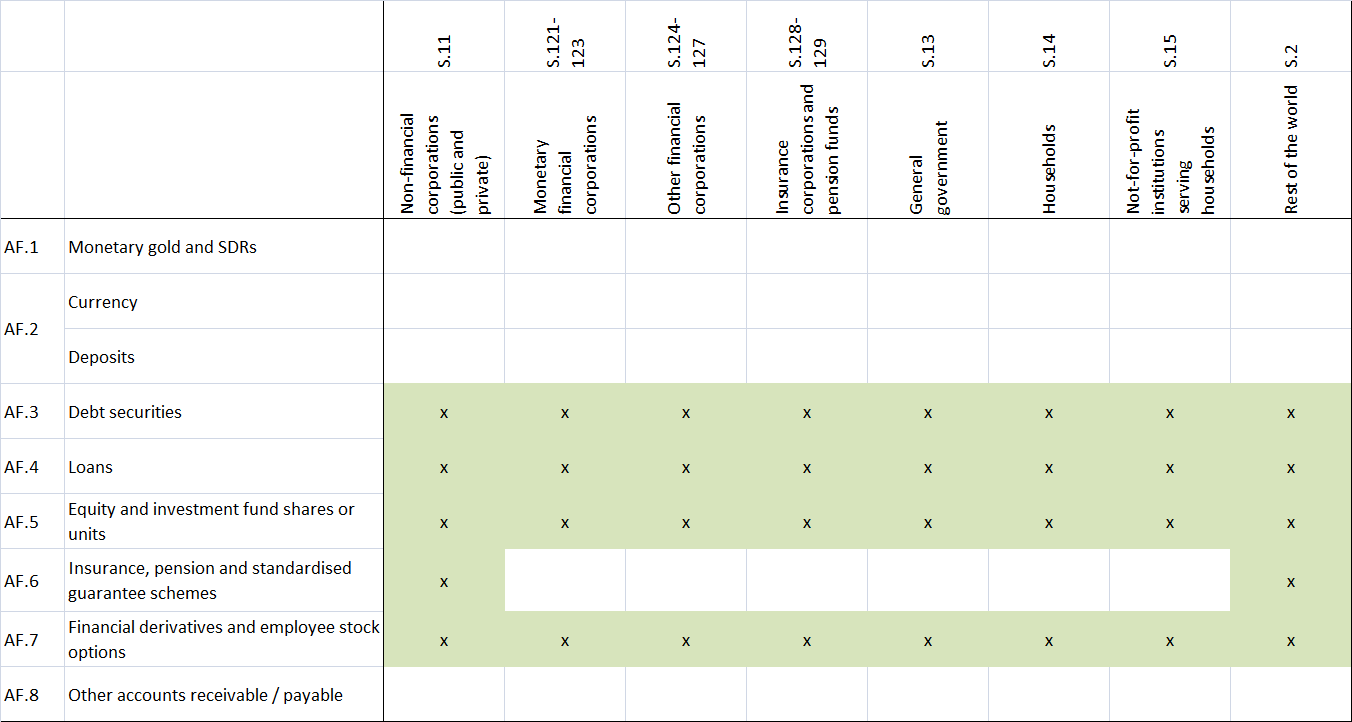 Download this image Figure 3: Summary of priority areas for the enhanced financial accounts, by sector and instrument – priorities are in the green cells, marked with an x

The aim is to deliver the enhanced financial accounts in 5 years, with implementation of flow of funds into the national accounts in 2020. The key deliverables of the project in the first 2 years will be as follows.

ONS will continue to publish further experimental statistics and articles after 2018, with a full set of experimental flow of funds statistics anticipated in 2019, and full implementation into the national accounts to take place in 2020. An indicative timeline for development, showing the development phases and the incremental approach to data acquisition, is shown in Figure 4. This timeline will be continually reviewed and refined.

Figure 4: Indicative timeline for the development and implementation of the enhanced financial accounts based on record-level data

Download this image Figure 4: Indicative timeline for the development and implementation of the enhanced financial accounts based on record-level data