“The latest rise in CPI was mainly due to rising petrol and diesel prices, along with a significant slowdown in the fall in food prices.

“The costs of raw materials and goods leaving factories both rose significantly, mainly thanks to higher oil prices and the weakened pound.

“Both house prices and rents continue to grow over the year but with some signs of a slowdown in recent months.”

We introduced our new economic "theme days" in January which will ensure that related economic statistics are released together. This month, construction output price indices (OPIs) are released as part of the Prices theme day alongside those for producer prices, consumer prices and housing prices. The separate bulletins contain details of the new data published and important information on how to interpret the statistics.

This article provides an economic overview of the latest data and current trends. Updated analysis of the contributions to the 12-month growth rate for input and output producer prices, and the contributions to the 12-month Consumer Prices Index (CPI) growth rate by import intensity of products is available in the data tables associated with this release.

Figure 1 shows that Producer Price index (PPI) input (left-hand scale) and PPI output indices (right-hand scale) move in broadly similar ways over time, although the movement in manufacturers’ input prices is considerably greater than for manufacturers’ output prices. The 12-month input PPI has increased by 20.5% in January 2017 which largely reflects rising import costs for UK manufacturers and some impact from falling prices a year ago. 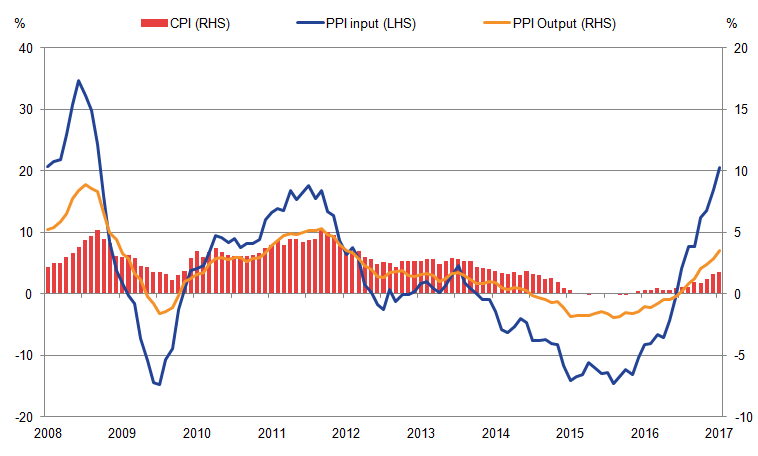 The Harmonised Indices of Consumer Prices (HICP) are calculated using a common basket of goods to provide the best measure for comparisons of consumer price inflation across the European Union. The USA also produces a measure of inflation on a HICP-consistent basis. In the UK, the HICP is equivalent to the Consumer Prices Index (CPI).

Figure 2 shows that HICP rates of inflation for the EU, Germany, the UK and USA are all over 1% for the first time in around 2 years. France’s inflation rate in comparison remains below 1% but has been increasing since March 2016.

Over the time period shown in Figure 2, the UK has seen slightly higher rates of inflation than the other countries, but all have followed broadly similar trends of falling inflation rates between 2012 and 2015, with the US experiencing deflation during 2015. This was largely driven by the fall in global oil prices at that time which are denominated in dollars.

Since the beginning of 2016, all the countries shown in Figure 2 have experienced increasing rates of inflation, as higher global oil prices have started to feed through into higher prices for fuel and lubricants. In December 2016, the UK, EU 28, Germany and France all reported 12-month growth rates of the fuels and lubricants component of HICP of above 5%. The depreciation of sterling of around 17% against the dollar during 2016 will also be influencing the UK. Currency effects are likely to be less significant for euro area countries such as Germany and France, as the euro has strengthened slightly against the dollar during 2016.

Figure 3 shows price indices for several class-level categories that sit within the Consumer Prices Index (CPI) “Food” group over the period since January 2014. During this period there has been relatively intense competition between food retailers, and increasing market shares from discount food stores. There has also been a rise in the value of sterling in 2014 and 2015 followed by depreciation during most of 2016.

The effective exchange rate for sterling was around 10% lower in value by the end of January 2017 compared with the end of January 2014. The exchange rate can affect the prices paid for directly imported food such as fruit and vegetables and influence the prices of manufactured food products such as bread and cereals which use a range of imported foodstuffs and products. Output producer prices for a range of food products have also been increasing in recent months. This is discussed in the UK producer price inflation: Jan 2017.

Figure 3 highlights 3 specific class-level price indices, as well as the weighted movement for the entire group (the dashed line) and summarises the movement of the remaining price indices in this group using a swathe to denote the range. Fruit prices have generally been higher than other types of food since 2014, and vegetable prices the lowest. 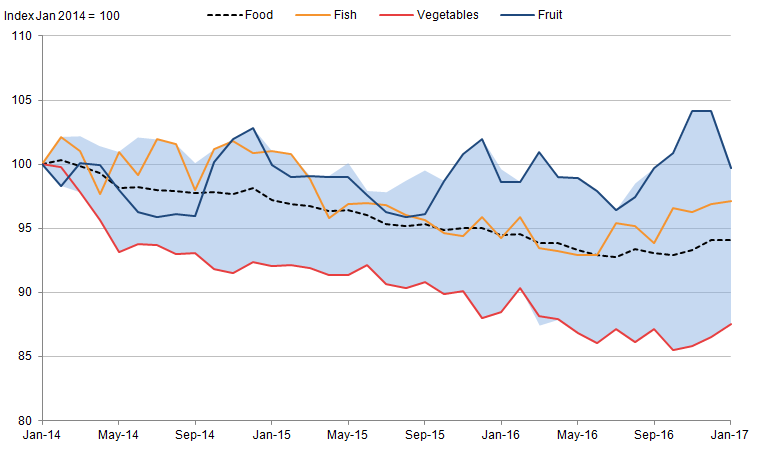 Previous analysis has shown that there is a relationship between producer price increases for fuel and food which are starting to be reflected in upward movements in their related consumer price indices as manufacturers begin to pass on cost pressures to consumers.

Figure 4 shows the relationship between producer and consumer prices for the motor vehicles sector.

Figure 4: Input and output PPI for the manufacture of motor vehicles and CPI new cars

Download this chart Figure 4: Input and output PPI for the manufacture of motor vehicles and CPI new cars

Figure 4 shows that Producer Price index (PPI) input prices for cars closely follow the PPI output prices of parts and accessories for the motor vehicle supply chain, and both series have been rising steadily since the end of 2015. Factory gate prices for motor vehicles produced in the UK were flat between 2012 and the middle of 2016, but have recently started to increase in line with increased input costs and the costs of parts and accessories. This increase in costs may be eroding an element of profit margin for the retailer as consumer prices look to have remained relatively subdued throughout this time to maintain competitiveness.

However, in January 2017 there has been an up-tick in the index for new cars1, with the 12-month growth rate increasing to 2.4% from 1.0% in December 2016. This is in line with the increase in output prices since mid-2016 for motor vehicles and may be a sign that increased costs of production to UK manufacturers and sterling effects are beginning to feed into the price of new cars for consumers.

Notes for: Increases in producer prices continue to put pressure on manufacturers’ margins and consumer prices

This month provides a provisional estimate for December average house prices for the UK and enables an analysis of the whole of 2016. Overall, UK house prices growth remained robust over the past year with annual average growth of 7.5%, compared to 6.0% in 2015.

The fastest-growing regions for house prices and rental prices are now East and South East England. In the latest period, the 12-month growth rate for average house prices in London was 7.5%, below the average for England of 7.7%. This is the first time that London house price growth was below that of England since August 2009.

During 2016, there was a boost to house sales in March as purchases were brought forward before the increase in Stamp Duty Land Tax on purchases of additional residential properties came into effect in April 2016. As a result, buy-to-let mortgages as a proportion of all mortgage completions rose from 18% in February to 30% in March. Further analysis of the effects of the changes in stamp duty can be found here: The effect of stamp duty changes on housing market activity.