Additional analysis of the August PPI and CPI headline statistics and previous trends with a particular focus on how movements in the sterling exchange rate may have influenced these data.

A correction has been made to the Additional analysis of the Producer Price Index (PPI) and Consumer Price Index (CPI): Aug 2016 release Figure 1 and data table "Contributions to the 12-month rate of input PPI". This was due to a small error when calculating the contributions from the component, "other imported materials". You can see the original content in the superseded version. We apologise for any inconvenience.

This article provides some additional analysis of the August Producer Price Index and Consumer Prices Index. It has a particular focus on how previous and current movements in the sterling exchange rate may have influenced these data. This is an update of the additional analysis article published in August which included an outline of how changes in the exchange rate could feed through to prices data.

A dataset is available with this release which contains longer time series of PPI and CPI contributions to growth by sector and import intensive products respectively. The dataset also contains further information on which goods and services within the CPI basket are grouped into which category of import intensity. “Import intensity” refers to the percentage of final household consumption which is directly due to imports.

Producer Price Index (PPI): measures change in the prices of goods bought and sold by UK manufacturers. The PPI index is divided into an input price index and an output price index. The input price indices measure change in the prices of materials and fuels bought by UK manufacturers for processing. These are not limited to just those materials used in the final product, but also include those required by the company in its normal day-to-day running.

The output price indices measure change in the prices of goods produced by UK manufacturers (these are often called “factory gate prices”).

Figure 1 shows the contribution of the main components of PPI input prices to the annual growth rate, some of which are affected by changes in the sterling exchange rate. For example, crude oil and other commodities such as metals and chemicals are often priced in US dollars and other foreign currencies. Other things being equal, the sterling equivalent price UK producers pay for these goods in foreign currencies will rise or fall as the pound depreciates or appreciates respectively.

Figure 1 provides evidence of the positive contribution to input PPI inflation by imported food, other imported parts and equipment, and other imported materials as well as home-produced food since May 2016, and these have further increased in June and July, and August. An example of the marked increase in the contribution to input PPI inflation in August 2016 is imported metals, which has moved from making a negative to a positive contribution to PPI input prices in recent months, which may be related to the depreciation of sterling.

The rate of inflation as measured by the Consumer Prices Index (CPI) was 0.6% in the year to August 2016, unchanged on the previous month. Along with July 2016, this is the highest rate since November 2014. However, CPI inflation remains low compared with its long-term performance.

The CPI data for August is the second month to include information gathered since the UK’s referendum on its membership of the European Union and the changes in the sterling exchange rate which followed. The value of sterling compared with a basket of currencies, known as the effective exchange rate, fell by 7.3% between early August 2015 and 23 June this year and a further 9.5% between 23 June and the last day in July. The decline in sterling has steadied since; between 1 and 31 August, sterling depreciated by 0.5%.

Figure 2 presents contributions to the CPI from products grouped by their relative import intensities, along with the inverted effective exchange rate (ERI). Goods and services which largely originate from domestic producers are grouped together in a low import intensity group, while products which largely come from abroad are grouped into higher import intensity groups. The ERI series has been inverted, so that a depreciation of the currency is represented by an increase in the line graph, helping to interpret a depreciation of the currency as representing a higher sterling equivalent price for imported goods and services. Energy products – which have considerable import content, on which the price of oil has a particular impact – are grouped separately. This updates the analysis previously published in the August Economic Review to include the most recent data. 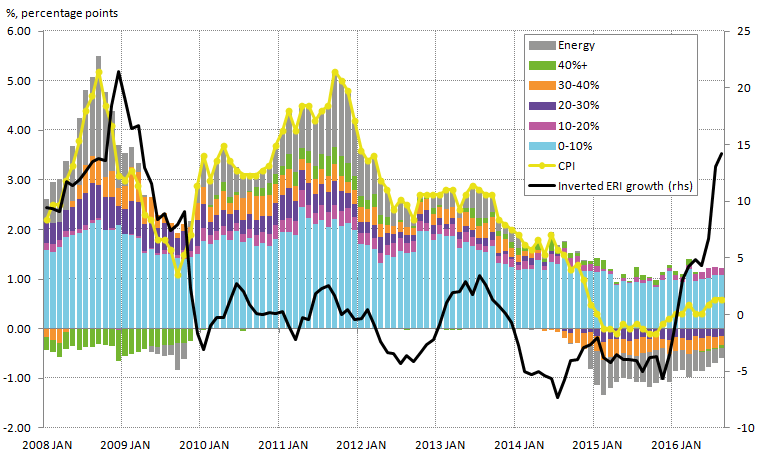 Source: Office for National Statistics and the Bank of England

Figure 2 suggests that energy and more import-intensive products account for a fairly high proportion of recent movements in inflation. The least import-intensive non-energy products in Figure 2 have made a fairly steady contribution to the CPI rate of inflation over recent years. More import-intensive products, by contrast, account for much of the rise in inflation following the depreciation of sterling in 2008 and 2009 and for much of the moderation of inflation over the last 2 years – a period during which sterling appreciated against its major trading partners.

In August 2016, the largest contributor to consumer price inflation continued to be goods in the lowest import intensity category (0 to 10%). The sharp depreciation of sterling seen since the beginning of 2016 has yet to influence upward pressure on the CPI; goods and services in the inflation basket with the highest import intensities are still providing negative contributions to the headline figure. This may change later in the year as the increases seen in the PPI are potentially passed onto consumers. However, this could also be offset or amplified by a range of other factors such as future movements in commodity prices, consumer confidence, employment and GDP growth and any consumer response to their experience of changes in relative prices for domestically produced or imported goods.

An up-to-date manual for the Producer Price Index, including the import and export index is now available. PPI methods and guidance provides an outline of the methods used to produce the PPI as well as information about recent PPI developments.