There are larger changes to some of the NUTS3 regions within the North West, East of England, London and the South East regions. Other NUTS3 areas are affected to a lesser extent.

This correction does not impact NUTS1 or NUTS2 figures.

A processing error in one of the input datasets for this release has been discovered. The error has now been corrected and the impact was to change the figures for London NUTS2 and NUTS3 areas for all industries in 2013 and 2014. This correction does not impact NUTS1 figures, figures for 1997-2012, nor NUTS2 or NUTS3 areas other than London in 2013 and 2014.

Total GVA estimates in millions of pounds (£m) are divided by the resident population of a region to give GVA per head in pounds (£). This can be a useful way of comparing regions of different sizes, provided there are no large commuting flows into or out of the region (background note 4).

Regional figures for the UK are presented for areas according to the Nomenclature of Units for Territorial Statistics (NUTS) (background note 1 has more information).

In 2014 GVA per head was highest in London, at £42,666, and lowest in Wales, at £17,573. Map 1 shows the variation in GVA per head across the UK. ONS has also published an Interactive Map and an article on the major cities to accompany this release. 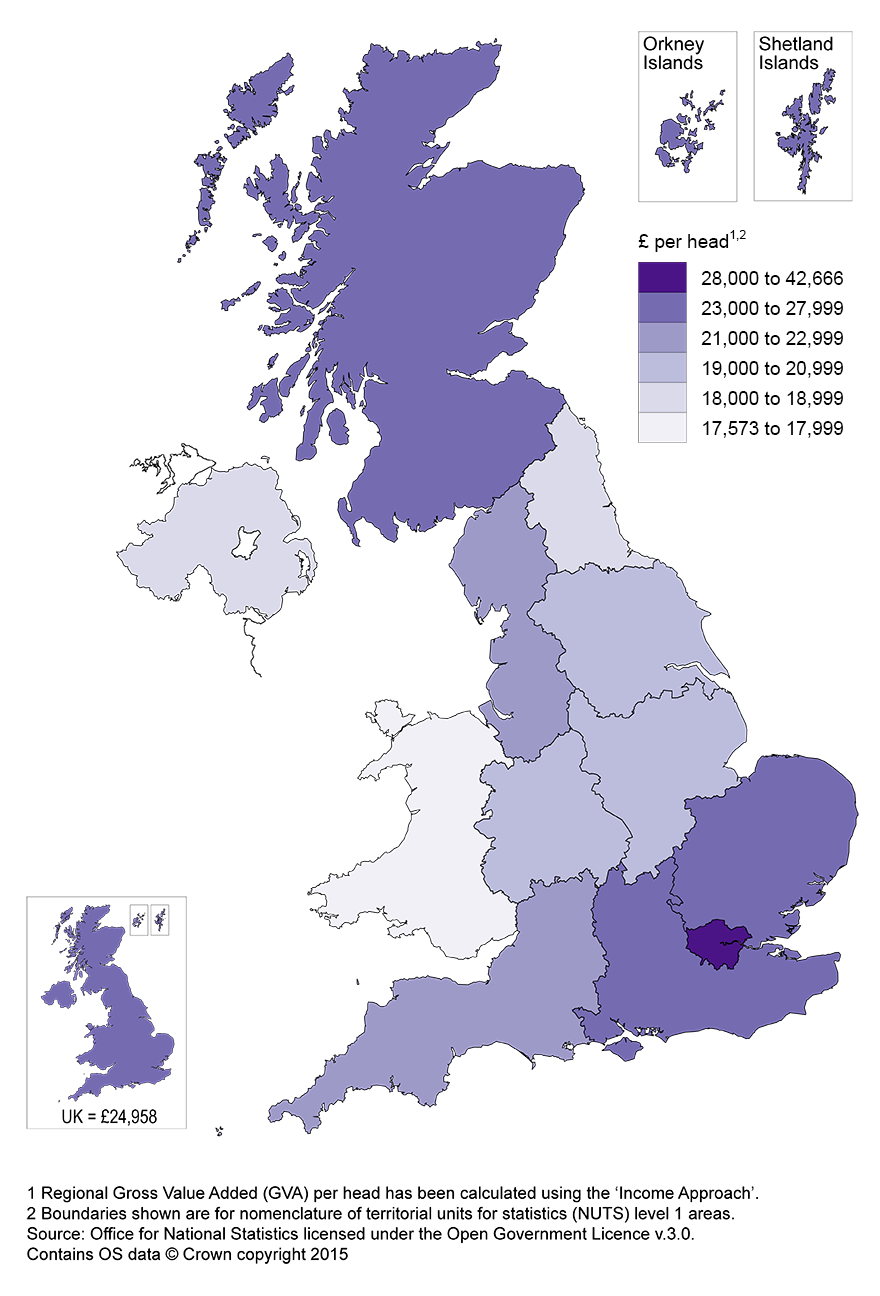 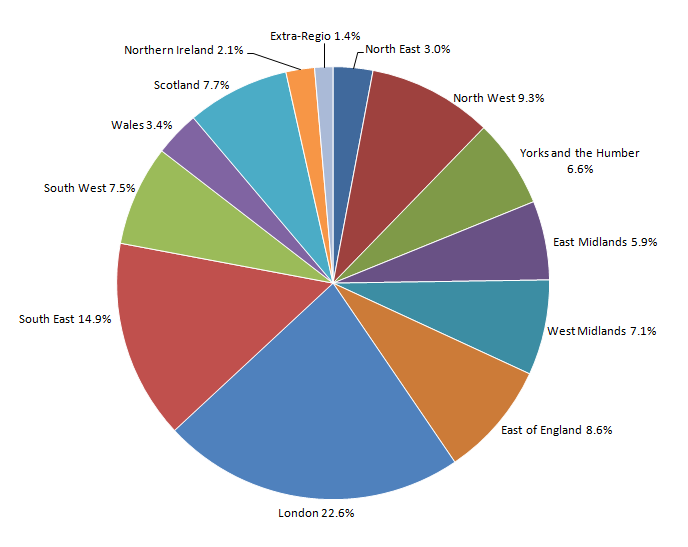 The increase in GDP during 2014 was supported by growth in household final consumption expenditure (1 Mb Excel sheet) of 2.7% year-on-year. There was also a positive contribution to GDP growth from an improvement in the UK’s net trade balance during the year. Gross fixed capital formation, with a 7.5% year-on-year increase, and Government Expenditure (up 1.9%) also positively impacted on GDP. The Bank of England base rate remained at 0.5% throughout 2014. During the year inflation stayed below the 2% target. The Consumer Price Index (CPI) annual average rate for 2014 stood at 1.5%, decreasing from the 2.6% in 2013.

Workforce jobs increased in all UK regions except Northern Ireland between the fourth quarter of 2013 (Oct to Dec) and the corresponding period in 2014. The largest percentage increase was in the North West, with 4.1%, followed by London with 3.8%, while Northern Ireland decreased by 0.6%. During the same period, employment rates increased in all regions except Wales, which decreased by 1.5%. The highest increases were in the North East (2.5%) and the North West (2.2%).

Total foreign export of goods decreased from all UK countries between 2013 and 2014. However, at the regional level total exports increased from the North East (7.6%), West Midlands (6.2%) and the South West (1.0%). The North East and the West Midlands increased their export towards both EU and non-EU destinations. The total increase in the South West was instead due to EU export growth that compensated a slight decline in non-EU exports. An increase of export towards EU countries was also recorded for Northern Ireland, but this was not sufficient to offset the contraction to other destinations.

In 2014 GVA per head of population increased in all NUTS1 regions. The largest percentage increase was in London at 5.3%, over 1 percentage point ahead of the next two regions, Scotland and East of England, both at 4.2%. Northern Ireland had the smallest percentage increase at 1.9%, followed by Wales at 2.1%. All other regions had increases of between 2.3% and 3.1%.

Figure 2 shows the annual growth in GVA per head for each UK region in 2012, 2013 and 2014. The North East, Yorkshire and The Humber, East of England and London are the only regions that have shown increasing growth in each of these years.

All other regions decreased compared to the UK average. The largest decrease was in the West Midlands, which fell 8.6 points to 81.6, followed by Northern Ireland, which fell 7.7 points to 75.9. Figure 3 illustrates each region’s GVA per head indices compared with the UK average of 100 for the years 1997 and 2014. 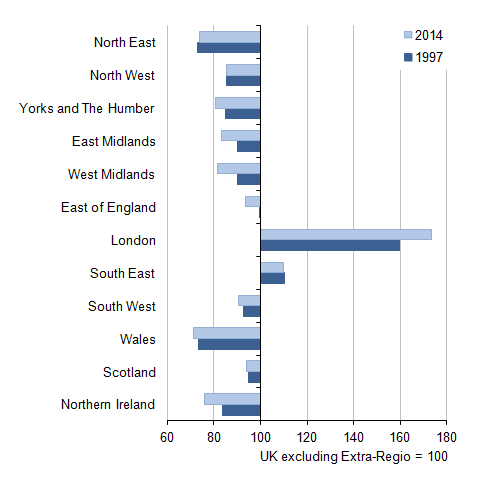 In 2014 GVA per head increased in 39 of the 40 NUTS2 sub-regions. The largest percentage increases were in:

The only sub-region not to increase was Cornwall and Isles of Scilly, where GVA per head decreased by 0.1%.

West Wales and The Valleys had the lowest GVA per head with £15,745.

Figure 4 shows each NUTS2 region grouped into its parent NUTS1 region, with the horizontal line representing the UK average GVA per head.

The NUTS 2015 boundary changes (see background note 1) have increased the number of NUTS3 local areas from 139 to 173. Key changes occurred in London and Manchester.

In 2014 GVA per head increased in 168 of the 173 NUTS3 local areas. The largest percentage increases were in:

GVA per head decreased in five local areas. The decreases were in:

There were 45 local areas that had GVA per head higher than the UK average of £24,616 in 2014, the top five of which were within London. These were followed by Milton Keynes, Berkshire, and Aberdeen City and Aberdeenshire.

In 2014 the North East had the least amount of variation between its constituent local areas, from £14,979 in Northumberland to £23,745 in Darlington. London had the greatest amount of variation, from £16,900 in Redbridge and Waltham Forest to £298,520 in Camden and City of London.

In this release, industry estimates for the years 2013 and 2014 have been published for the first time. Industry estimates were previously only available at t-2 (where t is the current year). It should be noted that all 2014 data in this release are provisional as they are based on national data that have not been through the Supply and Use balancing process. The provisional industry estimates compiled using the income approach will not match those published in the UK National Accounts, compiled using the output approach. The difference is shown in the statistical discrepancy that can be found in the reference tables released with this bulletin.

Figure 6 shows the industrial composition of total GVA for each country in 2014. Looking at the growth between 2013 and 2014:

Figure 6: Industrial variation in total GVA in the UK countries, 2014

Download this chart Figure 6: Industrial variation in total GVA in the UK countries, 2014

Figure 7 shows the industrial composition of total GVA for each NUTS1 region of England in 2014. Looking at the growth between 2013 and 2014:

They are used by the UK Government and the Devolved Administrations of Northern Ireland, Scotland and Wales to formulate and monitor economic policy and allocate resources.

These statistics inform the general public about the state of the economy and provide insight into the relative economic positions of local areas and issues.

The ONS Regional Accounts team also receives general enquiries relating to these estimates from a diverse range of bodies including the Bank of England, other government departments, local authorities, business analysts, consultancy firms, financial institutions, economists, academics and the media (local and national).

The resulting GDP per inhabitant estimates (expressed in terms of PPS), provide a measure of the total economic activity in a region and may be used to monitor and compare the economic development of regions over time.

The purpose of EU structural funding is to redress regional imbalances, by supporting the development of regional economies. Convergence funding provided by the European Regional Development Fund (ERDF) and the European Social Fund (ESF) is allocated within the current round of funding (covering the period 2014 to 2020), to promote growth-enhancing conditions and factors leading to economic convergence for the least developed EU Member States and regions.

The estimates published by Eurostat were based on the NUTS boundaries implemented in January 2012, so there are differences between these and the regional GVA estimates being discussed in other parts of this Statistical Bulletin.

Figure 8 shows the differences across the NUTS2 sub-regions of the EU countries:

The greatest variation in GDP per inhabitant is seen in the UK, however the national average figure is similar to that of the EU average.