These regional estimates of GVA are measured using the income approach, which involves adding up the income generated by resident individuals or corporations in the production of goods and services. We also publish experimental estimates of GVA measured using the production approach, with the effect of inflation removed, which are published separately.

Figures are presented for areas according to the Nomenclature of Units for Territorial Statistics (NUTS) (background note 1 has more information). 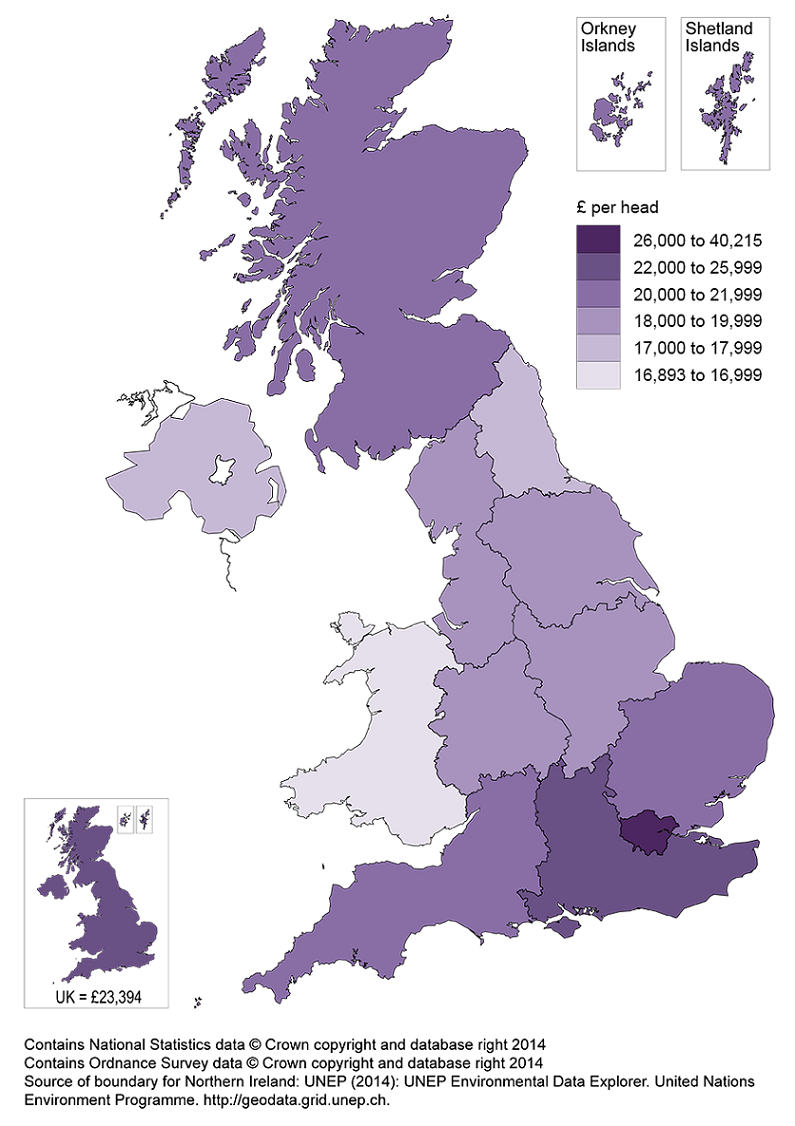 Total GVA estimates in millions of pounds (£m) are divided by the resident population of a region to give GVA per head in pounds (£), which is a useful way of comparing regions of different sizes (background note 4). In 2013 GVA per head was highest in London, at £40,215, and lowest in Wales, at £16,893. 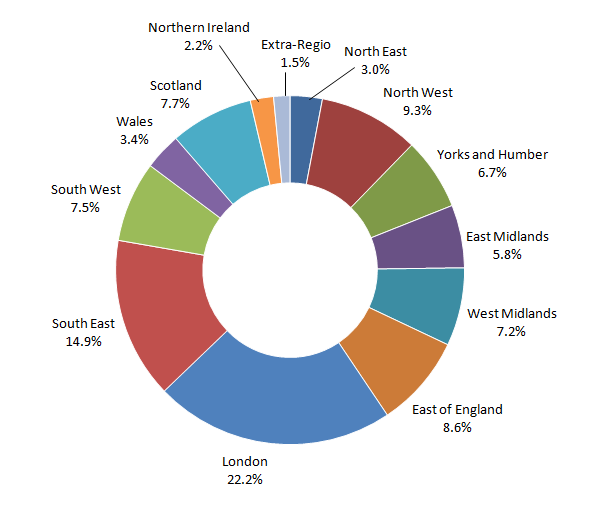 These regional estimates of Gross Value Added are measured using the income approach, which involves adding up the income generated by resident individuals or corporations in the production of goods and services. It is calculated gross of deductions for consumption of fixed capital, which is the amount of fixed assets used up in the process of production in any period.

The main components of income based Gross Value Added are:

These estimates are consistent with the National Accounts Blue Book 2014. National aggregates for the components of GVA are allocated to regions using the most appropriate regional indicator available. These estimates are produced at current prices, which include the effect of inflation.

GVA estimates in this bulletin are available at three geographical levels, in accordance with the NUTS classification. Changes to NUTS areas came into force on 1 January 2012 (background note 1 has further details).

GVA per head of population is a useful way of comparing regions of different sizes and is an important indicator for both domestic and European policy purposes. It is calculated using the entire population (including the economically inactive).

These regional GVA estimates update those published in July 2014 (a re-release of the December 2013 publication) for the period 1997-2012. Additionally, estimates for the year 2013 are released for the first time (background note 6). Industry estimates are provided at t-2 (where t is the current year) for all levels of geography.

In keeping with the UK National Accounts commitment to meeting the European Commission definition of Gross National Income, estimates of the value added to the economy of illegal activity relating to drugs and prostitution (251.9 Kb Pdf) have been included in regional GVA for the first time. Some regional data sources are available that provide information on seizures of illegal drugs by police forces and on crimes related to prostitution. However the inconsistencies in these data sources, over time and between regions of the UK, have meant that reliable estimates of the regional variation in these activities have not been possible at this time. We have therefore allocated the UK total figure for each activity across the regions according to the adult population in each area.

Therefore it is not possible to draw any conclusions about areas of the UK that have higher or lower than average use of illegal drugs or prostitution services from these regional GVA estimates.

The UK, along with all other European Union Member States, has begun a programme of work to introduce the changes to data and methods required by the new European System of Accounts (ESA2010). These changes are many and varied, and will be implemented in the UK National Accounts over a number of years. The UK Regional Accounts aim to implement any relevant changes (those requiring a different treatment to be implemented in order to allocate the national total across regions of the UK) in the first regional publication following their introduction to the National Accounts.

The most notable ESA2010 changes implemented this year are:

All other changes made to the UK National Accounts measure of GVA, to satisfy the requirements of Gross National Income or ESA2010, impact upon the regional GVA estimates in the form of different national totals for the various components of income, even where no explicit changes to the regional allocation have been needed. Of these, changes to the treatment of non-profit institutions serving households (NPISH) (109.6 Kb Pdf) have resulted in the greatest impact on the national figures.

We have made use of the Oil and Gas Model developed by Scottish Government statisticians to improve the measurement of onshore oil and gas extraction in regional GVA. The model provides more up-to-date estimates of the output and costs associated with oil and gas extraction and provides a split between offshore and onshore activity. We have used the onshore figures from the Scottish model and have allocated them to regions using data from the Department for Energy and Climate Change (DECC) on the actual production by each onshore oilfield. As before, all offshore activity is assigned to the Extra-Regio category (background note 1) in accordance with European guidance.

In 2013 the UK saw its economic output increase every quarter. In Q3 (July - September) 2013, GDP exceeded its pre-downturn peak. This was mainly driven by the services component as the output of the construction, production and agriculture sectors were all still below the Q1 (January - March) 2008 level.

Overall, the annual GDP growth in real terms in 2013 was 1.7%. Household final consumption expenditure, general government final consumption expenditure and gross fixed capital formation all contributed positively. Net trade did not contribute to the annual output growth. The reason is that the trade balance worsened slightly due to the value of imports growing marginally more than exports in 2013, compared with 2012.

Total foreign exports of goods from Wales, Scotland and Northern Ireland both to EU and to non-EU countries increased in 2013. Wales presented the highest increase of 11.2%, recovering from a fall of similar magnitude in the previous year. On the other hand, total exports from England declined. This was mainly driven by a reduction of exports to EU countries, which exceeded the limited increase in exports to non-EU countries. The North East region experienced the largest percentage decline in total exports (-10.3%), whereas the West Midlands enjoyed the highest increase relative to the 2012 value (18.4%).

The Bank of England base rate remained unchanged at 0.5% over the year. The annual average inflation rate stayed above the Bank of England’s target of 2% although it declined by 0.2 percentage points down from an average of 2.8% in 2012, to 2.6% in 2013.

In 2013 GVA per head of population increased in all NUTS1 regions. The largest percentage increases were in:

Northern Ireland had the smallest percentage increase at 0.9%. All other regions had increases of between 2% and 3%.

All other regions decreased compared to the UK average. The largest decreases were in:

In 2013 GVA per head increased in all of the 37 NUTS2 sub-regions. The largest percentage increases were in:

The lowest percentage increases were in Lincolnshire and Northern Ireland, both of which increased by 0.9%. 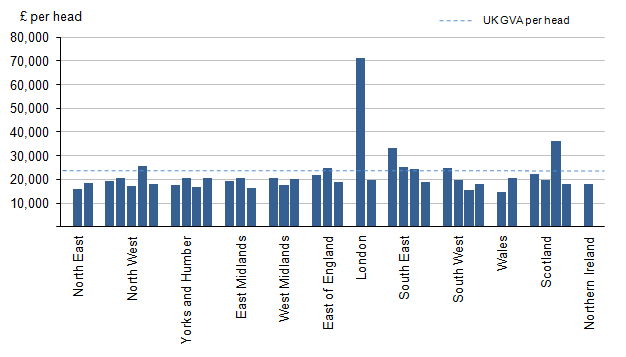 In 2013 GVA per head increased in 126 of the 139 NUTS3 local areas. The largest percentage increases were in:

Of the 13 local areas where GVA per head decreased, the largest percentage decreases were in:

There were thirty local areas which had GVA per head higher than the UK average of £23,394 (excluding Extra-Regio) in 2013:

The local areas with the lowest GVA per head were: 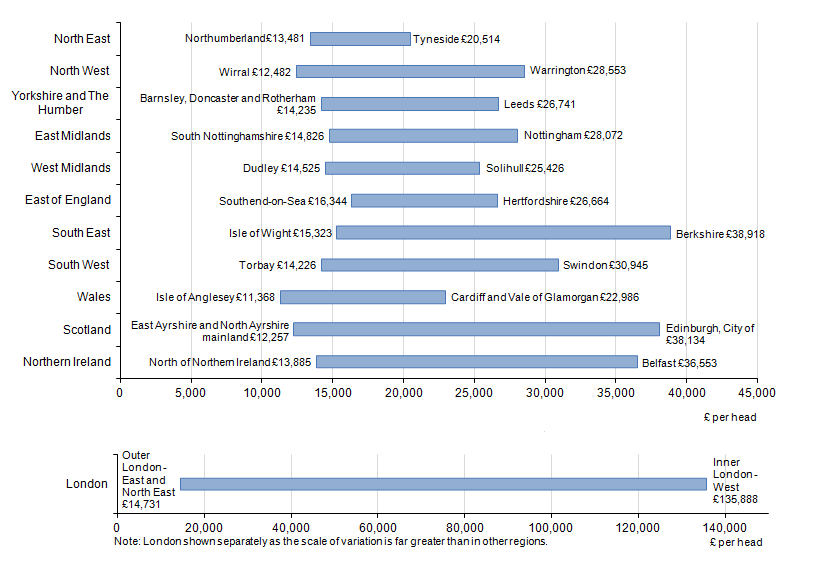 They are used by the UK Government and the Devolved Administrations of Northern Ireland, Scotland and Wales, to formulate and monitor economic policy and allocate resources. These statistics are used in the development of the ‘Programme for Government’ and the ‘Economic Strategy for Northern Ireland’. They are also used in respect of Public Service Agreement (PSA) targets for several Northern Ireland government departments. The Scottish Government uses regional GVA estimates in the production of Supply and Use tables and other related economic statistics, including Quarterly National Accounts Scotland. Regional GVA per head is also used by the Scottish Government to monitor the relative economic performance of countries and regions over time. GVA per head estimates are one of the Welsh Government’s ‘Programme for Government’ outcome indicators for Growth and Jobs.

These statistics inform the general public about the state of the economy and provide insight into the relative economic positions of local areas and issues, such as the ‘North-South divide’. The House of Commons Library produces a standard note about these statistics and they are frequently the subject of parliamentary questions raised by Members of Parliament.

The ONS Regional Accounts team also receives general enquiries relating to these estimates from a diverse range of bodies including the Bank of England, other government departments, local authorities, business analysts, consultancy firms, financial institutions, economists and the media (provincial and national). These statistics also facilitate academic research by individuals and universities within the UK and abroad.

The resulting GDP per inhabitant estimates (expressed in terms of PPS) provide a measure of the total economic activity in a region and may be used to monitor and compare the economic development of regions over time.

The purpose of EU structural funding is to redress regional imbalances by supporting the development of regional economies. Convergence funding provided by the European Regional Development Fund (ERDF) and the European Social Fund (ESF) is allocated within the current round of funding (covering the period 2014 to 2020), to promote growth-enhancing conditions and factors leading to economic convergence for the least developed EU Member States and regions. 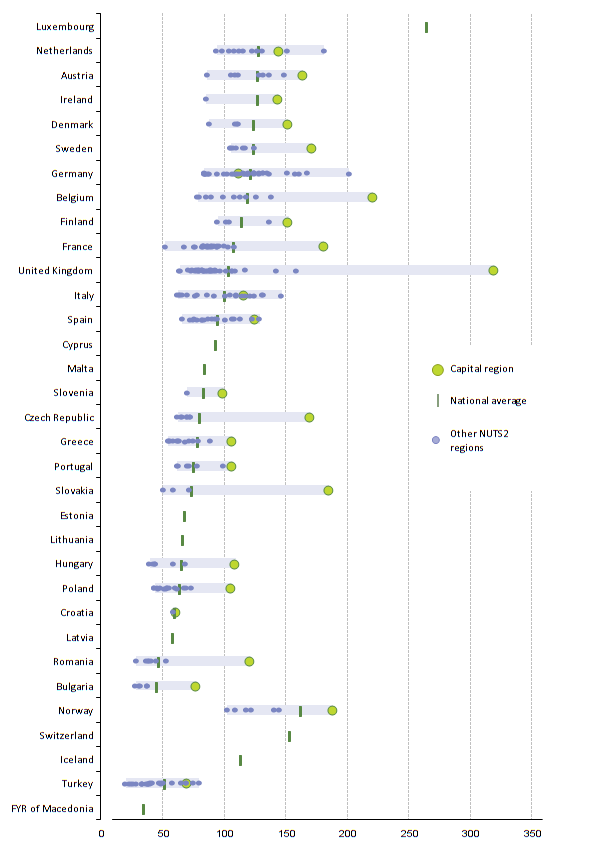