We published a response to the consultation on proposed changes to the gross domestic product (GDP) release schedule on 19 October 2017. Further details on this response are available on our Consultation Hub. In summary, an estimate of monthly GDP will be published on 10 July 2018 (for the reference period of May) and there will be two quarterly estimates of GDP per quarter rather than the current three; the preliminary estimate of GDP will be deferred by around two weeks and the second estimate of GDP will be brought forward by two weeks to form the new first estimate released six weeks after the end of the quarter. The income and expenditure approaches to GDP will be made available in this new first estimate, two weeks earlier than presently. The first estimate of quarterly GDP (for Quarter 2 (Apr to June) 2018) under this new model will be published on 10 August 2018.

This release is the final Preliminary estimate of GDP under the current publishing model as we move to the new model outlined previously in July 2018. Alongside this release, we have published an article giving further details on the implementation of the new GDP publishing model.

Change in gross domestic product (GDP) is the main indicator of economic growth. The preliminary estimate of GDP is based solely on the output approach to measuring GDP.

The output approach measures gross value added (GVA) at a detailed industry level before aggregating to produce an estimate for the whole economy. GDP (as measured by the output approach) can then be calculated by adding taxes and subtracting subsidies (both only available at whole economy level) to this estimate of total GVA. However, as there is no information available on taxes and subsidies at this stage, the quarterly growth for output GVA is taken as a proxy for GDP growth (more information on creating the preliminary estimate of GDP is available on our GDP methodology page).

Under the present model, the preliminary estimate is the first of three estimates of GDP published by Office for National Statistics, followed by the second estimate and the quarterly national accounts. In the second estimate of GDP and the quarterly national accounts, the output GVA and GDP estimates are balanced with the equivalent income and expenditure approaches to produce headline estimates of GVA and GDP. Further information on all three approaches to measuring GDP can be found in the national accounts. See Section 2 previously and the separate article for details of the model being introduced with effect from July 2018.

All data in this bulletin are seasonally adjusted, chained volume estimates and have had the effect of price changes removed (in other words, the data are deflated).

The growth estimates within this release are created from short-term measures of output and should be considered alongside medium-term and long-term patterns in the series to give a more comprehensive picture. At this stage, data content is less than half of the total required for the final output estimate. The estimate is subject to revision as more data become available, but these revisions are typically small between the preliminary and third estimates of GDP, with no upward or downward bias to these revisions. More information on the data content and the monthly path of the components of the output measure of GDP are included in section 6. Additional factors around the compilation of today estimates are outlined in the Monthly Economic Commentary published alongside this release.

In accordance with National Accounts Revisions Policy, there are no periods open for revision in this release.

Table 1 shows data for gross domestic product (GDP), GDP per head and each of the main industry aggregates for Quarter 1 (Jan to Mar) 2018.

Figure 1 shows the seasonally adjusted volume series for GDP, along with quarter-on-quarter growths, over the past decade. Quarter 1 2018 grew by 0.1%, the lowest rate of GDP growth since Quarter 4 (Oct to Dec) 2012, following the London Olympics in Quarter 3 (July to Sept) 2012.

Figure 2 shows GDP and the contributions of the main industry aggregates to the growth of GDP on a quarter on same quarter a year ago basis. This highlights an underlying picture of broadly slowing output in the services industries and GDP. The chart also illustrates a fall in construction in the most recent period, the only negative contribution seen in any main component in the period shown. 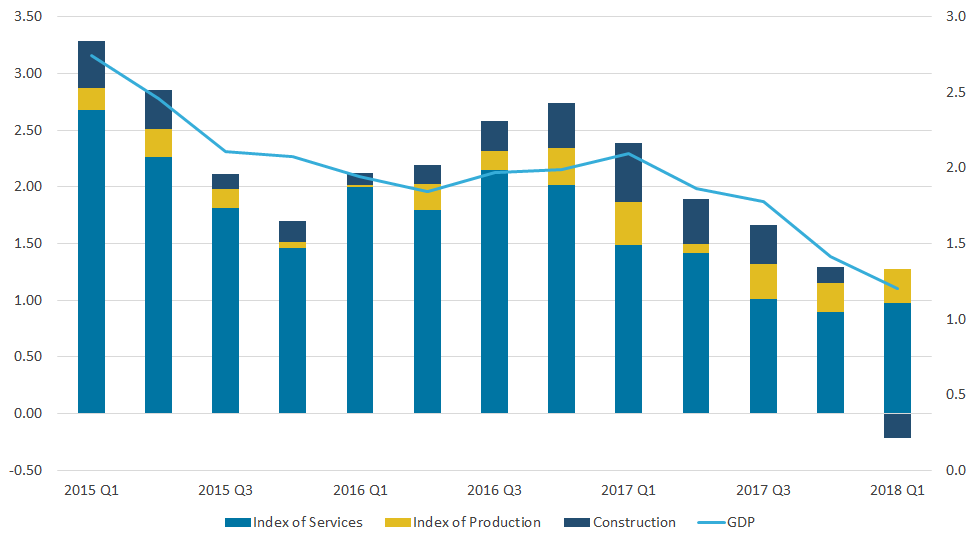 In Quarter 1 (Jan to Mar) 2018, UK gross domestic product (GDP) was estimated to have increased by 0.1%. The services aggregate was the main driver to the growth in GDP, growing by 0.3% and contributing 0.21 percentage points.

Services grew by 0.3% in Quarter 1 2018 when compared with the previous quarter. While three of the four sectors within services experienced growth this quarter, there was a fall in distribution, hotels and catering.

Despite services growth in the most recent quarter, the quarter on same quarter a year ago growth shows a longer-term weakening in this part of the economy, particularly in the more domestic consumer-facing industries. By this we mean retail trade, food and beverage serving activities, publishing, audio visual and broadcasting activities, and arts, entertainment and recreation (Standard Industrial Classification 2007 codes 45, 47, 56, 58, 59, 60, 90, 91, 92 and 93), as shown in Figure 3.

Figure 3: Growth rates of the services sector and its components, quarter on same quarter a year ago

Download this chart Figure 3: Growth rates of the services sector and its components, quarter on same quarter a year ago

The business services and finance sector continued to be the main driver of growth in services, increasing by 0.4% and contributing 0.14 percentage points to quarterly GDP growth. There was broad-based growth within this sector, with the largest contributor to GDP growth being architectural and engineering activities, which increased by 2.5% and contributed 0.04 percentage points to GDP.

In contrast, distribution, hotels and catering fell by 0.1%, contributing negative 0.01 percentage points to GDP in Quarter 1 2018. Retail trade was the largest contributor to the negative growth, decreasing by 0.5%.

The services industries were broadly unaffected by the snow except for retail trade (within the distribution, hotels and catering component of services). The fall in retail trade was driven by a decrease in petrol sales. This could be attributed to adverse weather conditions, which impacted on travel as outlined in the Retail sales, Great Britain: March 2018 bulletin.

Mining and quarrying, one of the main drivers of growth in Quarter 1 2018, grew by 3.5%, contributing 0.04 percentage points to GDP. This was due largely to the recovery from the fall in oil and gas production in Quarter 4 (Oct to Dec) 2017, with the Forties pipeline system working at normal capacity this quarter after several days of closure in the final quarter of 2017.

Agriculture decreased by 1.4% in the first quarter of 2018. Agriculture is the smallest of the main industrial groups with a weight of less than 1% in the output measure of GDP.

The approach to producing the preliminary gross domestic product (GDP) estimate uses monthly output data for January and February and forecasts for estimating March. The forecasts are informed by early responses to our Monthly Business Survey.

Analysis of early survey returns from businesses that feed into our construction estimates has shown that these tend to be lower than returns that are made at a later point in the data collection period. As a result, a quality adjustment is applied to the quarterly estimates for construction to account for any bias introduced from the lower data content available for March. These adjustments are calculated by assessing the revisions performance of quarterly construction estimates between the preliminary estimate of GDP and the second estimate over a number of periods. The adjustments are removed in the second estimate of GDP, when a fuller quarter of construction data are available.

More information on creating the preliminary estimate of GDP is available on the methodology page.

The Index of Production, construction output and Index of Services all feed into the headline GDP estimate. Some small revisions have taken place to previously published estimates, as seen in Table 2. Additional detail for sectors within production and services can be found in the Monthly path of components dataset, published alongside this bulletin.

The preliminary estimate of gross domestic product (GDP) is based solely on the output approach to measuring GDP and uses the same data that feed into the Index of Services, the Index of Production and Output in the construction industry datasets.

In the second estimate of GDP and the quarterly national accounts, the output gross value added (GVA) and GDP estimates are balanced with the equivalent income and expenditure approaches to produce headline estimates of GVA and GDP.

Some general information on the quality of the estimate of gross domestic product (GDP) can be found in the “Things you need to know about this release” section in the main part of this statistical bulletin. Further information is available on our methodology page.

The national accounts provide an integrated description of all economic activity within the economic territory of the UK, including activity involving both domestic units (that is, individuals and institutions resident in the UK) and external units (those resident in other countries). In addition to being comprehensive, the accounts are fully integrated and internally consistent. More information can be found in the UK National Accounts: a short guide.