This release provides estimates of R&D performed in and funded by the following 4 sectors of the UK economy, as defined in the “Frascati” Manual (2015):

These sectors’ R&D data are known collectively as gross domestic expenditure on R&D (GERD). GERD is the preferred measure of R&D activity for use in international comparisons. This release reports on R&D expenditure in the UK irrespective of the country of residence of the ultimate owner or users of the R&D produced.

The business sector is the largest component of GERD; its estimates in this release are derived from the Business Enterprise Research and Development 2015 statistical bulletin, published on 17 November 2016.

We are constantly aiming to improve this release and its associated commentary. We would welcome any feedback you might have, and be particularly interested in knowing how you make use of these data to inform your work. Please contact us via email: RandD@ons.gov.uk or telephone Cecil Prescott on +44 (0) 1633 456767.

In constant prices (adjusted to remove the effects of inflation), the 2015 estimate surpassed 2014’s high by £1.0 billion, with growth of 3%. With an average annual growth rate of 1.8% since the 1990 level of £20.1 billion, the long-term upward trend, in constant prices, is still evident.

UK estimates of R&D cover the 4 sectors of the economy, namely business, higher education, government (including research councils) and private non-profit organisations. Figure 1 shows the contribution each sector made to the total UK R&D expenditure estimate in 2015. 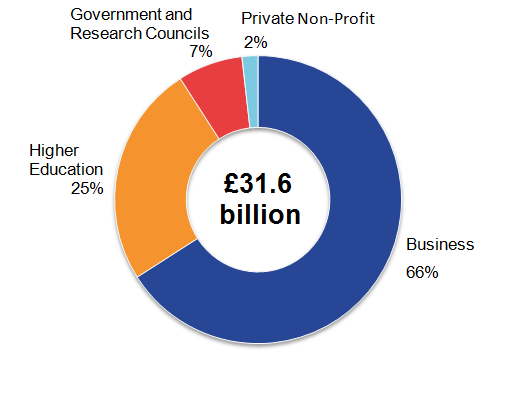 On an annual basis, the 400 largest business R&D performers are asked to select the industry product groups that best describe the type of R&D they undertake. For the smaller R&D performers, no product group data are collected, however, these businesses’ dominant Standard Industrial Classification (SIC) is used as a proxy to determine product group. The concept of "product groups" is described in more detail in the UK Business Enterprise Research and Development Quality and Methodology Information (QMI).

The product groups with the largest R&D expenditure in 2015 were:

The UK government has continued to promote growth in R&D, particularly in the business sector, through tax relief and Catapult Centres. A Catapult Centre is a “technology and innovation centre where UK businesses, scientists and engineers can work together on research and development, transforming ideas into new products and services”.

More detailed information on business R&D expenditure can be found in the Business Enterprise Research and Development 2015 statistical bulletin published on 17 November 2016.

The higher education sector, which includes universities and higher education institutes, was the second largest sector, accounting for 25% of total UK R&D expenditure in 2015, at £8.0 billion. This is growth of 2% from £7.8 billion in 2014.

Please note that new financial reporting standards for reporting periods starting on or after 1 January 2015 have introduced significant changes in the way financial performance is reported, which present difficulties in comparing 2015 results with historical trends. The funding for this sector is mainly provided by the Higher Education Funding Councils for England, Scotland, Wales, the Department for Employment and Learning in Northern Ireland and the 7 UK research councils.

In 2015, R&D expenditure in the UK performed by the government and research councils sector decreased by 5% from £2.2 billion in 2014 to £2.1 billion. This sector accounted for 7% of total expenditure on R&D performed in the UK in 2015.

Research Councils UK (RCUK) is the strategic partnership of the UK's 7 research councils. Each year the councils perform research covering the full spectrum of academic disciplines from the medical and biological sciences to the arts and humanities. RCUK also offers individuals and businesses overseas, access to the UK’s research facilities and infrastructure.

The private non-profit (PNP) sector includes registered charities and trusts. Those performing R&D specialise in mainly health and medical research. Some of the largest of these are based in the UK. This sector includes, for example, a number of cancer charities that carry out extensive research, from cancer prevention to drug development and clinical trials.

The PNP sector is the smallest R&D performing sector in the UK. In 2015, expenditure on R&D performed by these organisations was £0.6 billion, which contributed 2% to total UK-performed R&D expenditure. However, this sector did see the largest overall increase in percentage terms, up 15% from 2014. This is mainly attributable to the addition of several organisations, set up specifically to carry out large R&D projects. It should also be noted that the PNP survey is biennial and therefore the 2014 results were estimated.

Government (including research councils) was the second largest sector of funding with £6.5 billion, which was 21% of total UK R&D funding in 2015. This was a decrease of 1% from £6.6 billion in 2014. In comparison the sector itself only spent £2.1 billion in 2015 performing R&D in the UK.

Figure 2 shows the breakdown of UK GERD by funding sector for the last 2 decades.

Figure 2: Composition of UK gross domestic expenditure on research and development by funding sector in constant prices, 1995 to 2015

Download this chart Figure 2: Composition of UK gross domestic expenditure on research and development by funding sector in constant prices, 1995 to 2015

The UK government’s funding of defence R&D in 2015 was unchanged from 2014 at £1.2 billion. The proportion of UK total defence funding by the government sector also remained unchanged from 68% in 2014. The business sector provided £0.4 billion (23%) of funding and £0.2 billion (9%) came from overseas.

Of particular note, business R&D expenditure in the civil sector grew by 81% in constant prices since 1990, but business expenditure on R&D in the defence sector decreased by 50% over the same period.

In 2015, the South East and East of England dominated R&D activity in the UK. These regions together accounted for 38% of total UK R&D expenditure (£12.0 billion).

The methodology for producing regional estimates of expenditure on R&D for the government (including research councils) sector has been reviewed. Estimates previously used departments’ full-time equivalent (FTE) R&D employees by region as a proxy to calculate regional expenditure. Departments now provide actual breakdowns of their R&D expenditure by region. To allow comparison of the government data, values using both methods have been included in Table 6 of the datasets accompanying this bulletin. Due to this change in methodology it has not been possible to compare regions on a like for like basis.

The business sector remained dominant throughout the majority of the UK. However, the higher education sector continued the trend of dominating London and Scotland with spends of £2.0 billion and £1.1 billion respectively. This pattern has been evident for some time. In 2015, the gap between higher education and business in London continued to reduce whereas the gap in Scotland has increased slightly. However, while higher education dominated London and Scotland, this sector’s largest annual average increase since 2001 was in the South West at 5.6% compared with Scotland at 5.4% and London at 5.1%. 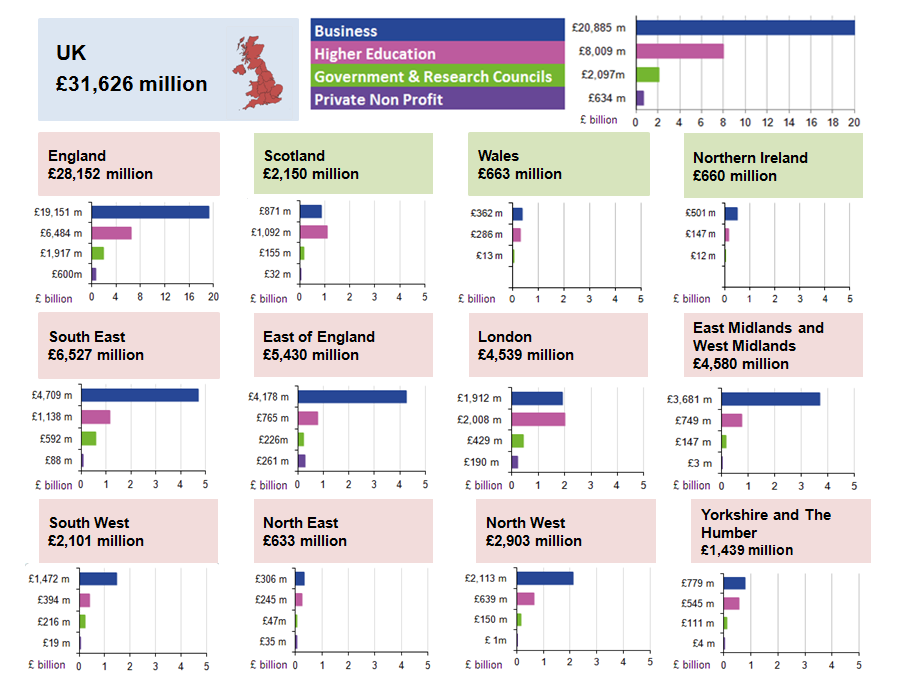 Europe 2020 targets specify 5 targets for the European Union (EU) to achieve by 2020, including a target of 3% of the EU’s gross domestic product (GDP) to be invested in R&D. Therefore, the estimates in this release are used in monitoring progress towards this target.

The latest Preliminary estimates produced by Eurostat indicate the percentage of R&D to GDP increased marginally in the EU-28 up to 2003, reaching a high of 1.79%, before declining slightly through to 2005 (1.74%) and then climbing again to an estimated 2.03% in 2015 (Figure 4). Please note that the 2015 results for the EU-28 and Organisation for Economic Co-operation and Development (OECD) countries are early estimates and are provisional at the time of this release. 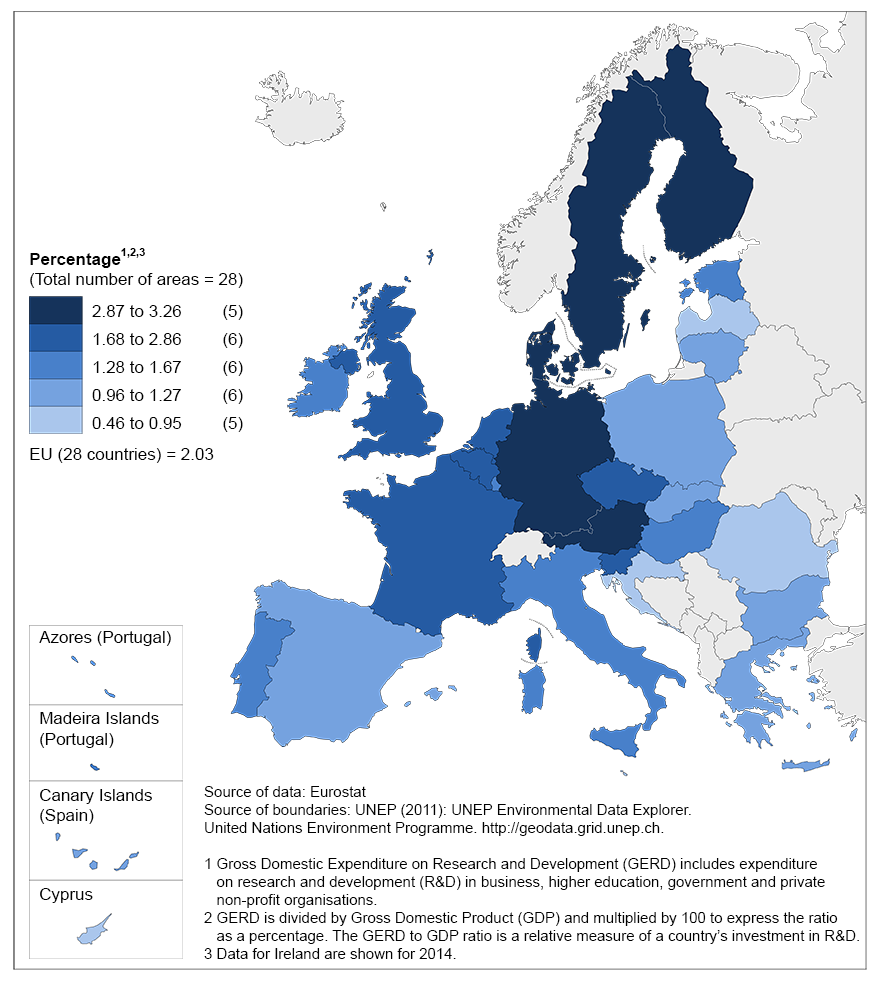 Further statistics on research and development expenditure in the UK can be found on our website.

A definition of “R&D” can be found in the Frascati Manual (2015). This is the internationally agreed standard as defined by the Organisation for Economic Cooperation and Development (OECD).

This release now includes data tables (LF1 and LF2) on qualified scientists and engineers in the labour force by gender. These estimates are from our Labour Force Survey and are categorised by type of qualification and occupation from the population of Great Britain aged 16 to 64. Occupation is based on the Standard Occupational Classification 2010 (SOC2010). This information was previously published in the "UK government expenditure on science, engineering and technology". However, these data are more relevant in the context of GERD R&D and can be made accessible at an earlier date.

An information note providing an assessment of the coherence of R&D statistics with other official statistics was published in 2012 on our website.