Spending on science, engineering and technology (SET) activities in the UK at current and constant prices analysed by government sector, and the indicative contribution that the UK makes to EU research and development expenditure.

Science, Engineering and Technology (SET) expenditure by the UK government includes expenditure by government departments, Research Councils and Higher Education Funding Councils (HEFCs). It also includes the indicative UK contributions to the European Union’s (EU) research and development expenditure. This should not be confused with the UK Gross Domestic Expenditure on R&D, 2012 (GERD) statistical bulletin, which only includes expenditure on R&D performed within UK borders, but by all sectors of the economy (see Background Note 1). R&D is the main component of the SET statistics.

These estimates were previously published by the Department for Business, Innovation and Skills (BIS) and were referred to as 'SET Statistics'. For clarification, please note that BIS included the year of publication in the SET Statistics title, not the year the data referred to. The title of this SET Statistical Bulletin includes the date to which the latest data refers, which is 2012.

For the purpose of SET statistics, UK government expenditure on SET consists of:

This definition of SET excludes all other scientific, technical, commercial and financial steps that are often necessary for the successful development and marketing of new or improved products, processes or services.

Two types of estimates are presented in this release, current and constant prices. Estimates in current prices present the value of expenditure in cash terms. Constant price estimates have been adjusted for inflation between years using the Gross Domestic Product (GDP) deflator. This allows changes in the volume of government expenditure on SET to be examined on a more comparable basis over time.

Also included with this release, are data tables referring to the personnel associated with scientific and technical postgraduate education and training. These provide data on the numbers of persons with higher education qualifications, their employment status and their type of occupation. These are sourced from ONS’ Labour Force Survey, and are used in policy analyses.

In this statistical bulletin, R&D and related concepts follow internationally agreed standards defined by the Organisation for Economic Cooperation and Development (OECD), as published in the ‘Frascati’ Manual. This manual defines R&D as “creative work undertaken on a systematic basis in order to increase the stock of knowledge, including knowledge of man, culture and society and the use of this stock of knowledge to devise new applications”.

Estimates in this release have the status of Official Statistics as they have not been assessed by the UK Statistics Authority (see Background Note 2).

The data in this bulletin and associated data tables relate to financial years. The main source of expenditure data for both this publication and the UK GERD publication is the annual Government Research and Development survey (GovERD).

Catapult Centres are a new government initiative and have been created by the Technology Strategy Board to promote growth in R&D. To achieve this, the government has linked business and academia through these Catapult Centres. A Catapult is a technology and innovation centre where the best of the UK's businesses, scientists and engineers can work side by side on R&D, transforming ideas into new products and services to generate economic growth.

We are aiming to improve this release and its associated commentary. We would welcome any feedback you might have, and would be particularly interested in knowing how you make use of these data to inform your work. Please contact us via email: RandD@ons.gov.uk.

Download this chart Figure 2: UK Government expenditure on SET as a percentage of GDP, 2001 to 2012

Figure 3: The components of UK Government expenditure on SET, 2012

Download this chart Figure 3: The components of UK Government expenditure on SET, 2012

There is no specific reason why the expenditure by the defence department peaked in 2002, but it was during a time of changing internal structures, the introduction of new accounting systems, as well as a review to ensure that Frascati Manual definitions were being adhered to. Caution is therefore advised when using SET defence data for this period, as it is likely to be overestimated. Please see Background Note 10 for more information on defence statistics.

The UK indicative contributions to the EU’s R&D expenditure increased by 54% between 2007 and 2008 in constant prices. They have remained at the same level of £0.7 billion since then. The initial rise was related to member states’ contributions being increased to meet the needs of the growing number of EU member states.

Download this chart Figure 4: The components of UK Government expenditure on SET, 2001 to 2012

In 2012, expenditure on SET by Research Councils was £3.2 billion, a decrease of £0.1 billion (4%) compared with 2011 in constant prices, and a decrease from the peak of £3.5 billion in 2006. The most recent decrease was mainly due to the completion of capital expenditure contributions to the new MRC Laboratory of Molecular Biology and the Francis Crick Institute.

The Research Councils’ estimated expenditure on SET includes their pension arrangements. These pension contributions are included separately on the data tables associated with this publication (Figure 5).

The UK government owns many research institutes and laboratories that carry out R&D. It also uses a range of different suppliers with facilities to carry out research, both inside and outside the UK.

All HEIs (including universities) provide finance statistics to the Higher Education Statistics Agency (HESA). A method has been established between the HEFCs, BIS and ONS to estimate government funded R&D expenditure in HEIs by using grant income as a proxy for expenditure. Please see Background Note 4 for more information.

The funding council for England (HEFCE) provides the most research funding as it has the highest number of HEIs. In 2012, expenditure by HEFCE on SET was £1.7 billion. This was 78% of the total HEFCs expenditure on SET, a similar level to recent years (Figure 7). 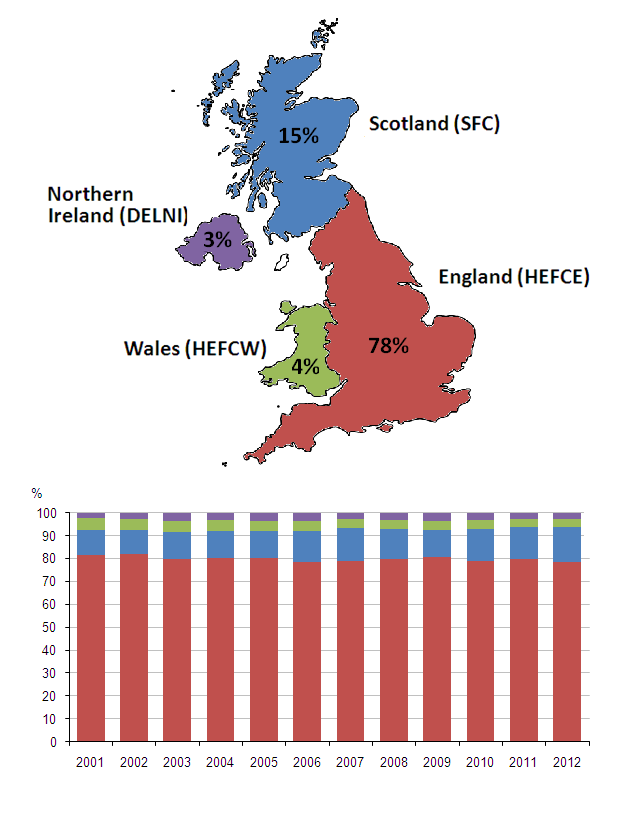 In 2012, expenditure on SET by the Ministry of Defence (MoD) was £1.5 billion, an increase in constant prices of £0.1 billion (10%) compared with 2011, and a decrease of £1.2 billion (45%) since 2001. This was mainly due to a decrease in development expenditure of £1.1 billion, with some large projects moving from the development phase into the manufacturing stage of their programmes, and not being replaced with other high value projects (Figure 8).

Figure 8: Defence expenditure on SET by Research and Development, 2001 to 2012

Download this chart Figure 8: Defence expenditure on SET by Research and Development, 2001 to 2012

In 2012, the indicative contributions that the UK made to the EU’s R&D expenditure, were £0.7 billion. This is an increase in constant prices of £0.2 billion (42%) since 2001. These figures were provided by HM Treasury and are broad estimates. This is because Member States’ contributions are not made to individual expenditure programmes, but to the EU budget as a whole. They are therefore referred to as the “indicative UK contributions to EU R&D expenditure”.