Annual spending and numbers employed on research and development in the UK broken down by product sector, and civil and defence businesses.

Estimates of expenditure and employment relating to R&D performed in the UK businesses in 2013, irrespective of the residence of the ultimate owner or user of the R&D produced are provided in this release.

Two types of estimates are presented in this release, current and constant price terms. Estimates in current prices present the value of R&D expenditure collected from the Business Enterprise Research and Development (BERD) survey. Constant price estimates have been adjusted for inflation between years using the GDP deflator. This allows changes in the volume of R&D expenditures to be examined on a comparable basis over time.

While R&D is often thought of as synonymous with ‘high-tech’ firms that are on the cutting edge of new technology, many established businesses that produce consumer goods and services spend large sums of money, on a systematic basis, improving existing products.

For the purposes of this release, R&D and related concepts follow internationally agreed standards defined by the Organisation for Economic Cooperation and Development (OECD), as published in the ‘Frascati’ Manual. In the Frascati Manual, R&D is defined as “creative work undertaken on a systematic basis in order to increase the stock of knowledge, including knowledge of man, culture and society and the use of this stock of knowledge to devise new applications”.

The estimates in this release are derived from the BERD survey. The survey has been run annually since 1993. Each year approximately 5,000 UK businesses are selected for this survey from a continually updated register of known R&D performers. The main purpose of the BERD survey is to supply data for policy and monitoring purposes on science and technology, of which R&D is an important part.

The National Accounts provide the framework that is used to define and measure the UK’s economic performance, such as the value of the UK’s Gross Domestic Product (GDP). Changes to the European System of Accounts (ESA) mean that from 2014 onwards, expenditure on R&D will contribute to the formation of assets and therefore the value of the UK’s net worth.

In March 2015 ONS will publish UK Gross Domestic Expenditure on Research and Development (GERD) for the year 2013. The UK GERD statistical bulletin includes estimates for R&D carried out by the following four sectors of the economy, as defined in the Frascati manual, namely business enterprise (BERD), higher education (HERD), government including research councils (GovERD) and Private Non-Profit (PNP) organisations. GERD uniquely provides information on total R&D expenditure in the UK, and is the preferred measure for use in international comparisons of overall R&D expenditure.

We are constantly aiming to improve this release and its associated commentary. We would welcome any feedback you might have, and would be particularly interested in knowing how you make use of these data to inform your work. Please contact us via email: RandD@ons.gov.uk or telephone Cecil Prescott on +44 (0)1633 456767.

Figure 1: Expenditure on business R&D in the UK

Download this chart Figure 1: Expenditure on business R&D in the UK

Figure 2: Expenditure on business R&D in the UK as a percentage of GDP

Download this chart Figure 2: Expenditure on business R&D in the UK as a percentage of GDP

A target set by the UK government in the Science and Innovation Framework 2004 - 2014 was to increase business investment in R&D towards a goal of 1.7% of GDP by the end of 2014.

On an annual basis, the 400 largest R&D performers are asked to select the industry product groups that best describe the type of R&D activities that they undertake. For the 2013 survey, the largest 400 spenders were those businesses previously reporting more than approximately £4.4 million expenditure on R&D. The concept of ‘product groups’ is discussed in detail as part of the background notes to this release (Background Note 9).

Of the 33 R&D product groups used in the collation of this statistical bulletin, 22 saw an increase in levels of R&D expenditure by UK businesses in current prices, since 2012, while 11 product groups decreased. In terms of percentage growth, the largest increases were in the Transport and storage, including postal and courier activities; Pulp, paper and paper products; Printing; Wood and straw products; Research and development services; Miscellaneous business activities; Technical testing and analysis and Recycling product groups.

The largest overall increase in expenditure since 2012 was in the Research and development services product group which increased by £322 million to £929 million in 2013 in current prices, a 53% increase. This group includes businesses who carry out a variety of different R&D activities which they cannot further breakdown and businesses whose expenditure has defaulted to the product group related to their Standard Industrial Classification (SIC), (Division 72). See Background Notes 9 and 10, which explain the concepts of product groups and SIC in more detail.

The largest increase in an individual product was in the Motor vehicles and parts product group, which increased for the second year in succession to £2.0 billion in 2013, an increase of £297 million (17%) from the estimate of £1.8 billion in 2012, accounting for 11% of total expenditure on R&D performed in UK businesses in 2013. This increase in R&D expenditure in the Motor vehicles and parts product group is supported by several reports which indicate that not only has the motor industry recently shown to be one of the strongest parts of the British economy, but that a resurgence in British car design and engineering has seen demand for UK models increase worldwide.

More evidence of the growth in motor product sales can be viewed in the ONS statistical bulletin UK Manufacturers’ Sales by Product (PRODCOM) for 2013.

Other product groups reporting around £1 billion or more R&D expenditure in the UK in 2013 were:

These seven product groups accounted for 69% of the total UK business R&D expenditure in 2013.

Figure 3: Expenditure on business R&D in the UK in current prices, by largest product groups, 2013 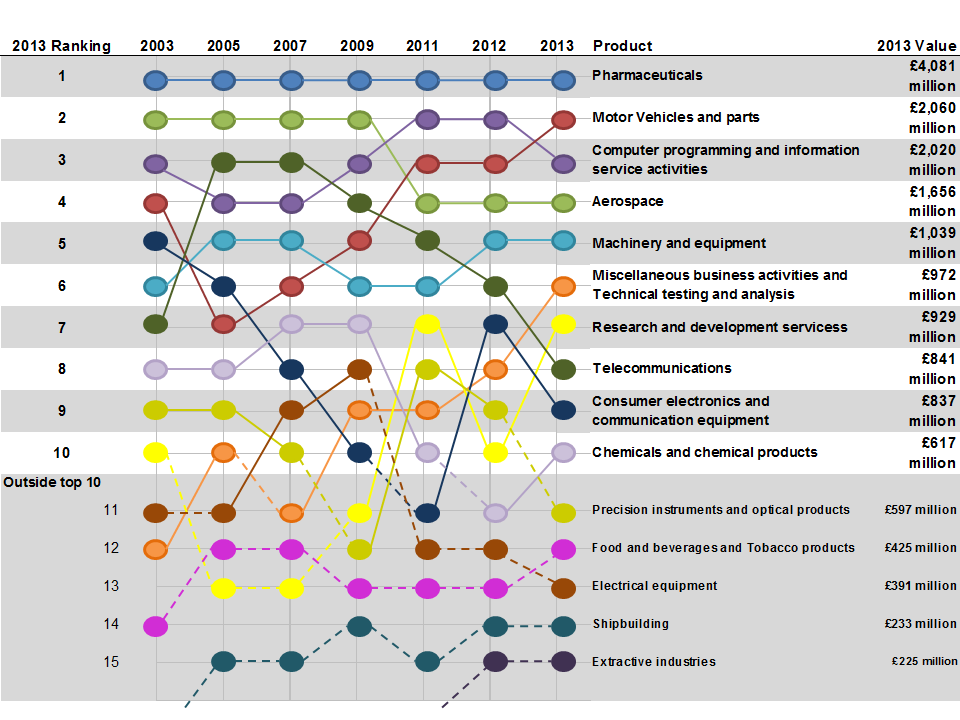 Download this image Figure 3: Expenditure on business R&D in the UK in current prices, by largest product groups, 2013

R&D expenditure and employment can be split between the civil and defence sectors. Expenditure in the civil sector in 2013 (£16.7 billion) accounted for 91% of total expenditure on business R&D.

Estimates of R&D expenditure on an industry basis, according to the Standard Industrial Classification (SIC), were first introduced in the 2011 BERD statistical bulletin to meet an expressed user need (See Table 27 in 2013 datasets (1.6 Mb Excel sheet).

It is important to note that estimates of R&D by industry are not directly comparable with the estimates of R&D expenditure by product groups. This is because businesses may report significant R&D in product groups which are different to the main classification of their business according to the SIC. See Background Notes 9 and 10, which explain the concepts of product groups and SIC in more detail.

The highest level of expenditure on business R&D in 2013 by SIC was performed by businesses that were classified to the ‘Scientific Research and Development’ industry, at £4.9 billion (26% of total expenditure) (Figure 5).

Five other industries had R&D expenditure of around £1 billion or more:

Figure 5a: Expenditure on business R&D in the UK (current prices), by largest industries

Download this chart Figure 5a: Expenditure on business R&D in the UK (current prices), by largest industries

Figure 5b: Expenditure on business R&D in the UK (current prices), by largest industries

Download this table Figure 5b: Expenditure on business R&D in the UK (current prices), by largest industries

Employment in R&D has remained relatively stable in recent years. The lowest level of employment in R&D in the last decade occurred in 2005, when 146,000 FTE were employed, while the highest level (178,000) was reached in the most recent period, 2013 (Figure 6).

It is possible, using data from the BERD survey, to analyse R&D expenditure by country and region. In this context, ‘region’ refers to the location where a business performs R&D, not the location of either the business’ headquarters or that of any external funders. 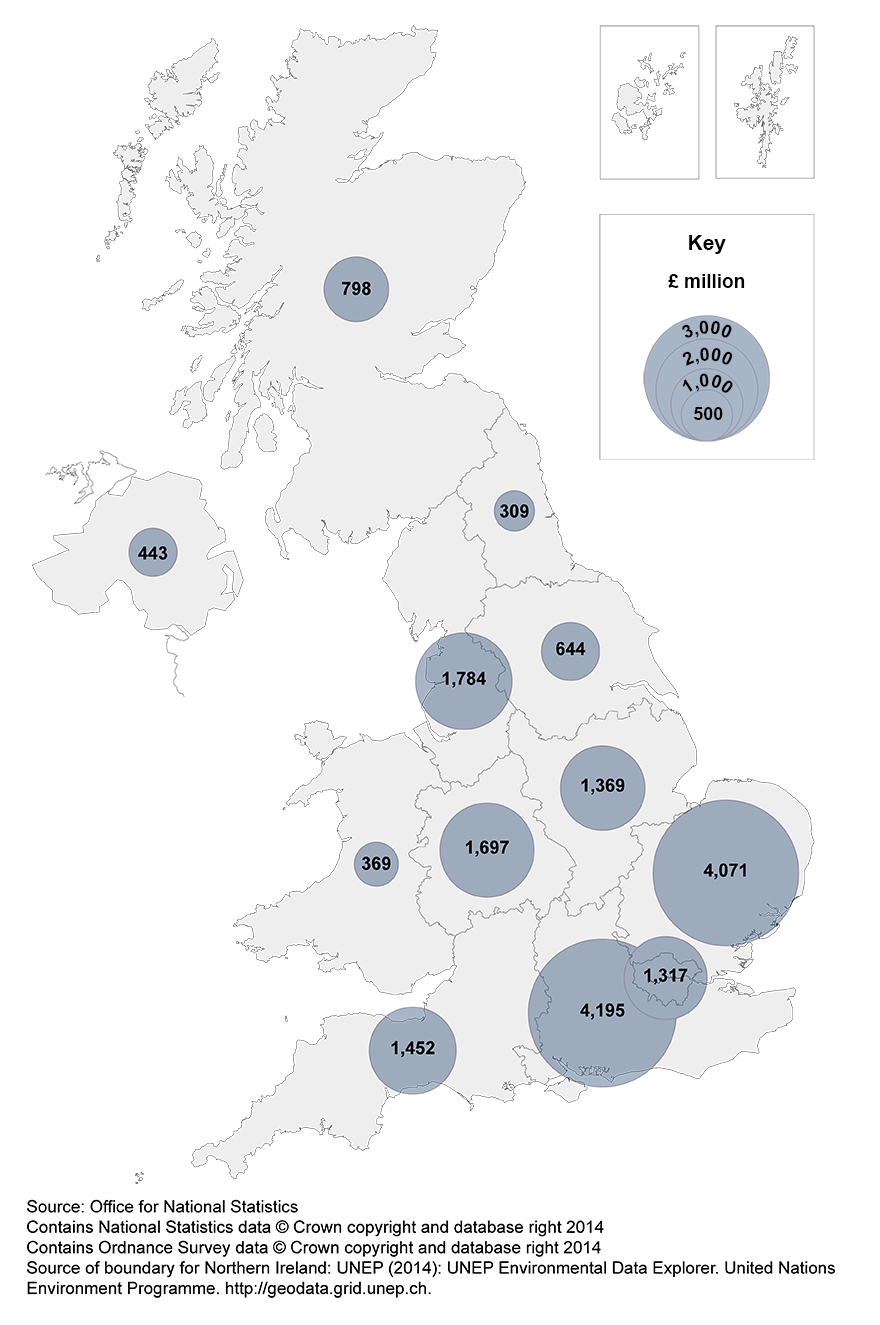 The only region to show a decrease in expenditure was London whose expenditure decreased by £145 million in current prices from the 2012 estimate of £1.5 billion in 2013, a 10% decrease.

The change in expenditure on R&D in London could be the result of several factors, the most likely being businesses relocating their R&D or R&D projects reaching maturity resulting in the R&D work in the region coming to a natural conclusion.

Map 2: Employment in R and D performed in UK businesses, 2013 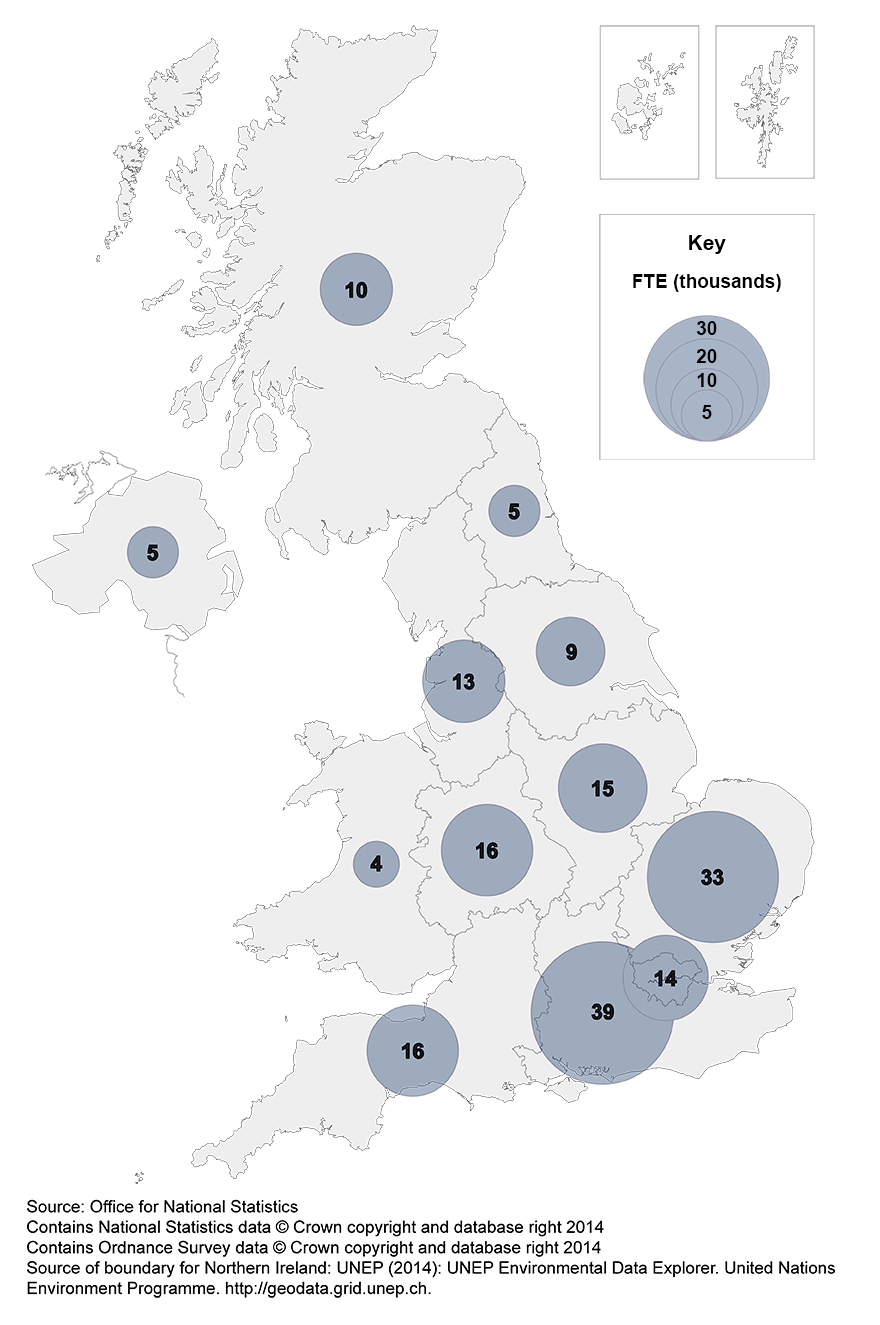 Download this image Map 2: Employment in R and D performed in UK businesses, 2013

Figure 7: Sources of funds for expenditure on R&D performed in UK businesses

Download this chart Figure 7: Sources of funds for expenditure on R&D performed in UK businesses

The UK Government’s funding of businesses’ R&D in 2013 was £1.6 billion, an increase of £269 million (19%) in current prices from the 2012 estimate of £1.4 billion. This represented 9% of total business R&D expenditure. UK government funding was predominantly in the defence sector (£1.1 billion), which made up 69% of government funding of business R&D. This includes government awarded contracts to UK businesses to develop aircraft, naval ships, submarines and their systems and equipment.

On 15 March 2013, ONS published R&D expenditure by foreign owned businesses, which contained more detailed analysis of the pattern of ownership of businesses that performed R&D between 1995 and 2011. This was based on the estimates that had been included in the 2011 BERD statistical bulletin. Estimates for 2011 have been revised in this bulletin. It should be noted that the original 2011 estimate of the proportion of R&D expenditure by foreign owned businesses has been revised upwards from 50% to 51%.

Figure 8: Ownership of businesses who perform R&D in the UK

Download this image Figure 8: Ownership of businesses who perform R&D in the UK

When comparing total business R&D intensity across countries, it is important to take into account differences in their industrial structure. OECD produces a Science, Technology and Industry Scoreboard to facilitate these comparisons.

In March 2012, as part of a publication ‘The UK R&D Landscape’, it was reported that “the business enterprise component of R&D expenditure in the UK is low by international standards, even after adjusting for structural difference between countries. It is also concentrated in the hands of a few very large firms and the small number of industrial sectors in which they are based".