An introduction to the main concepts that underpin international migration statistics.

International migration is the movement of people from one country to another and is often defined by the period of time they live in each country.

A long-term international migrant is “a person who moves from their country of usual residence for a period of at least 12 months” (United Nations (UN) definition).

A short-term international migrant is “a person who moves to a country other than that of his or her usual residence for a period of at least three months but less than a year except in cases where the movement to that country is for purposes of recreation, holiday, visits to friends and relatives, business, medical treatment or religious pilgrimage” (UN definition).

Levels of both long-term immigration and emigration are higher now than they were 50 years ago. In the 1960s and 1970s, more people left the UK than arrived here each year. In the 1980s, immigration began to exceed emigration each year and since 1994 net migration has been positive with migration adding to the total UK population. Since the late 1990s, the number of migrants has increased further, notably in 2004 when the EU expanded to include 10 new countries.

The international migration timeline (Figure 1) shows immigration, emigration and net migration as well as some main events, from 1964 to the latest final estimates.

The number of people moving into and out of the UK provides information on the flow of the population. The International Passenger Survey (IPS) and the Long-Term International Migration (LTIM) estimates are used to measure long-term migration flows.

The number of non-UK born or non-British citizens resident in the UK at a given point in time provide a stock measure of the non-UK population. Population by country of birth and nationality estimates are an example of stocks and are measured by the Annual Population Survey (APS).

There is no single source that can provide a measure of all movements of people into and out of the UK. We use a combination of data from different sources to calculate our official Long-Term International Migration (LTIM) estimates, which are published every quarter in the Migration Statistics Quarterly Report.

Estimates of LTIM are about 90% based on data from the International Passenger Survey (IPS), a sample survey carried out at all main ports. The IPS captures migration intentions and is used to identify international migrants entering and leaving the UK.

To estimate LTIM, the IPS data are supplemented by Home Office and Northern Ireland Statistics and Research Agency (NISRA) data and several adjustments are made to provide a more complete estimate of migration (Figure 1). 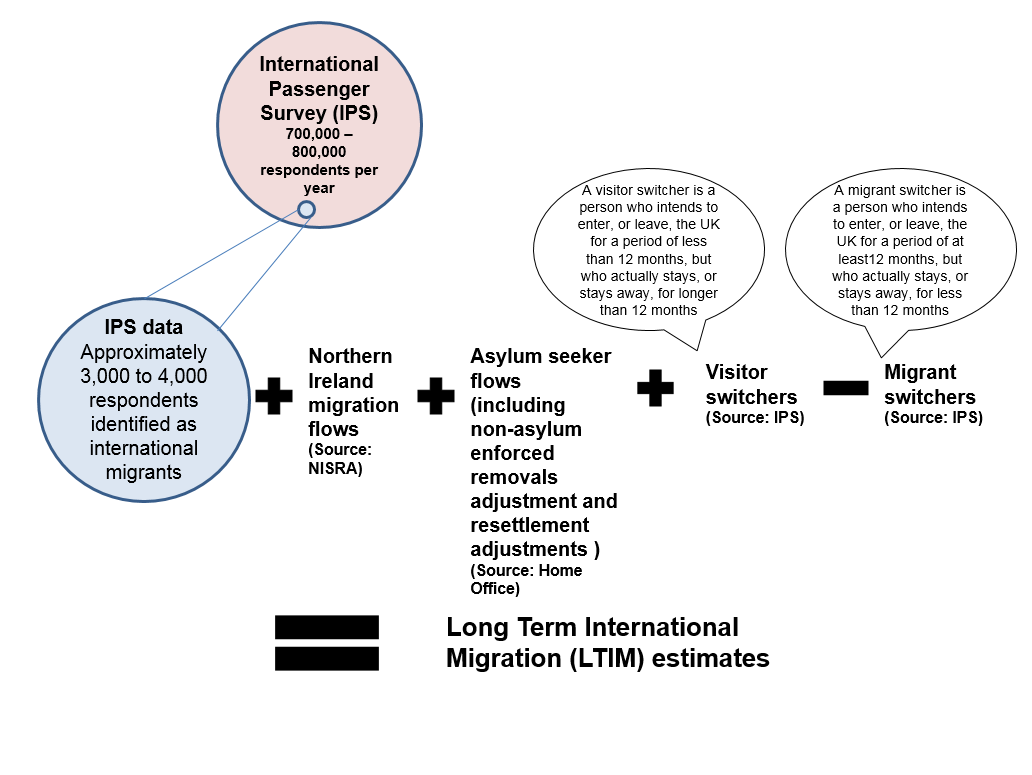 Estimates of short-term migration are available as flows (the total number of moves made over a set period) and stocks (the average number of short-term migrants in the country on an average day in a 12-month period). It should be noted that a person could migrate more than once in the same period so the data are a count of migrant moves not individuals.

There are two important differences between Long-Term International Migration (LTIM) and STIM estimates. Firstly, STIM are based on IPS interviews at the end of their stay, capturing the migrant’s actual behaviour. Secondly, STIM estimates are not adjusted to account for asylum seekers, people who change their intentions or the Northern Ireland land border.

Local authority estimates for STIM are produced for migrants who arrive in England and Wales for 3 to 12 months for work and study (United Nations definition) by distributing IPS estimates to local authorities using administrative data.

As well as the official statistics on long- and short-term international migration described in Sections 5 and 6, which are based largely on the International Passenger Survey (IPS), there are also administrative datasets, which can provide information and often more detail on specific sub-groups of the population.

Department for Work and Pensions provides data on the number of National Insurance number (NINo) allocations to adult overseas nationals entering the UK.

We also publish data on UK residents by country of birth and nationality as reported in the Annual Population Survey (APS). Residents may have recently arrived or been resident in the UK for a number of years and are a count of the stock of the non-UK population. Data for local areas and individual countries are also published in the underlying datasets.

An overview of these data sources and how they can be compared is provided in Comparing sources of international migration statistics.

In addition to these regular publications, you can find more articles relating to international migration, covering topics such as the labour market, housing, the number of British migrants living abroad and ethnicity.

It is possible to request more detailed information and data on international migration by emailing the Migration Statistics Unit at migstatsunit@ons.gov.uk.

The long- and short-term international migration estimates are based primarily on data collected by the International Passenger Survey (IPS). Sample surveys like the IPS are used when we would like to know something about a population of individuals but asking all of them is impractical.

As with all sample surveys, the estimates produced are subject to variability because we did not ask the whole population their migration intentions.

As well as being a measure of the reliability of the estimates, confidence intervals can be used to identify statistically significant changes. For further information on the reliability of our migration estimates, how to calculate confidence intervals and how to determine whether a change is statistically significant, please see: