What has happened to the income of retired households in the UK over the past 40 years?

A closer look at the growth and distribution of income for retired households over the past 40 years.

The text describing how estimates have been adjusted for the effects of inflation over time has been clarified within section 2 of this article.

Next release:
to be announced

In this release, private pensions include all workplace pensions, individual personal pensions and annuities. The State Pension has been classified as a cash benefit.

The inequality measure used is the Gini coefficient, which varies between 0 and 100. The lower the value, the more equally household income is distributed.

A retired person is defined as anyone who describes themselves (in the Living Costs and Food Survey) as “retired” or anyone over minimum National Insurance pension age describing themselves as “unoccupied” or “sick or injured but not intending to seek work”. A retired household is defined as one where the combined income of retired members accounts for the majority of the total gross income of the household.

This article looks at changes in the income and inequality of retired households over time. To make robust comparisons, historic data have been adjusted for the effects of inflation using the Consumer Prices Index including owner occupiers' housing costs (CPIH), excluding Council Tax, and income is expressed in financial year ending 2016 prices, referred to also as changes “in real terms”.

This publication requires a deflator that dates back to 1977. The CPIH, excluding Council Tax, is currently available from January 2005. The Consumer Prices Index (CPI) dates back to 1996, but a modelled historical series is available dating back to 1950. For this analysis, the owner occupiers’ housing costs (OOH) component was estimated using the actual rental series available from the Retail Prices Index (RPI). The OOH component was factored into the CPI (and modelled CPI prior to 1996) using the average OOH weight. Prior to 2005 this series is experimental.

Pension income amounts depend on an individual’s decisions throughout their working lives, and therefore changes in data in recent years could be as a result of decisions taken decades ago about pension participation and investment.

This article uses three main measures of income. While disposable income is arguably the most widely used household income measure, the use of original and gross income enables comparison of the effects of different stages of the taxes and benefits system (Figure 1). Disposable income is the amount of money that households have available for spending and saving after direct taxes (such as Income Tax and Council Tax) have been accounted for. It includes earnings from employment, private pensions and investments, as well as cash benefits provided by the state. 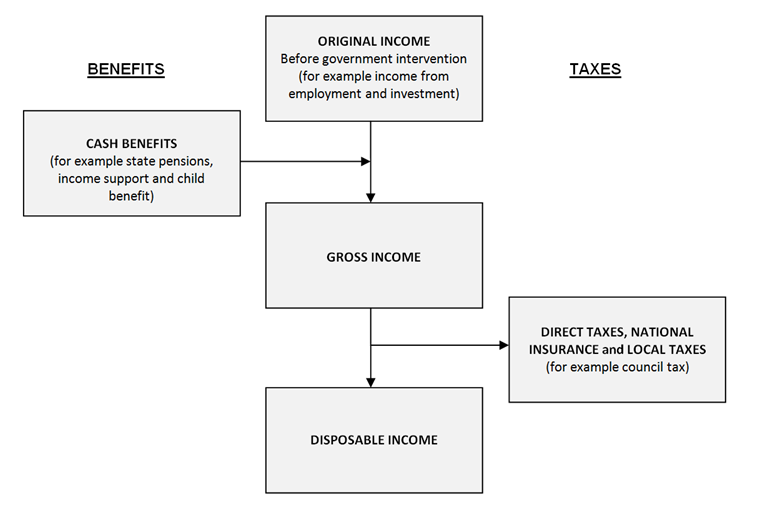 The mean simply divides the total income of households by the number of households. A limitation of using the mean for this purpose is that it can be influenced by just a few households with very high incomes and therefore does not necessarily reflect the standard of living of the “typical” household.

This article looks at changes in the income and inequality of retired households over time. To make robust comparisons, historic data have been adjusted for the effects of inflation and income is expressed in financial year ending 2016 prices, referred to also as changes “in real terms”.

Household incomes have also been equivalised to take account of changes in household composition over time. Equivalisation is the process of accounting for the fact that households with many members are likely to need a higher income to achieve the same standard of living as households with fewer members. Equivalisation takes into account the number of people living in the household and their ages, acknowledging that whilst a household with two people in it will need more money to sustain the same living standards as one with a single person, the two-person household is unlikely to need double the income.

This analysis uses the modified-Organisation for Economic Co-operation and Development (OECD) equivalisation scale.

Furthermore, the economic downturn had a smaller effect on retired households, with median income in FYE 2016 at 13.0% higher than pre-downturn levels in FYE 2008, while the income for non-retired households decreased by 1.2% over the same period.

Notes for: Private pensions are the main reason for the rising disposable income of retired households

Inequality of original income (income before cash benefits, including the State Pension, and direct taxes) has been on a downward trend since the 1980s (Figure 4). One reason for this fall is the increasing proportion of retired households receiving income from private pensions throughout this period, from 45% in 1977 to nearly 80% in financial year ending (FYE) 2016.

Inequality of gross income (income including cash benefits such as the State Pension) is much lower, showing that cash benefits have a significant role in reducing income inequality within retired households. Inequality is also lower for disposable income (which includes direct taxation) although in this case the reduction in the Gini coefficient between gross and disposable income is much smaller than that between original and gross income, indicating that direct taxes are having a much smaller effect on reducing income inequality of retired households.

Despite this, since FYE 2010, income inequality of gross and disposable income has shown an upward trend, though it remains small relative to larger increases seen in the 1980s. This indicates that cash benefits have become less effective at reducing inequality in recent years.

The effectiveness of cash benefits depends on two things: the average rate of the benefit (this represents how big the amount is relative to original income) and how targeted it is at reducing inequality; the latter is measured both by the degree to which it reduces the Gini coefficient and its progressivity1.

Figure 5 shows the average rate of cash benefits as a percentage of original income, their progressivity (measured using the Kakwani index) and the redistributive impact on the inequality (measured by the reduction in the Gini coefficient) between 1977 and FYE 2016. For all three measures an upward movement shows an increase in the effectiveness of cash benefits and vice versa. 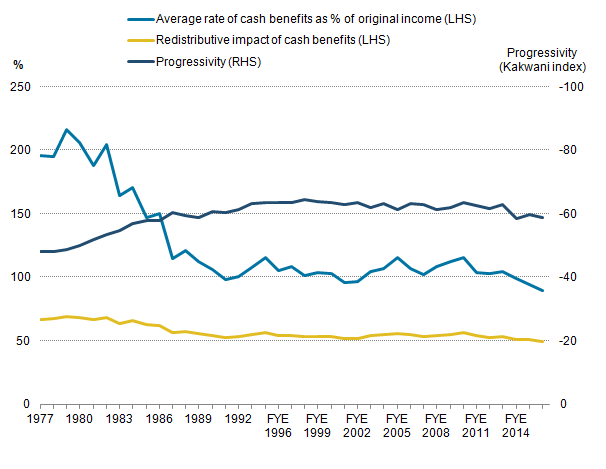 Similarly, since FYE 2013, the redistributive impact of cash benefits and their progressivity has also fallen. Combined, these measures show that the effectiveness of cash benefits in reducing income inequality has fallen in recent years, as more retired households increasingly rely on their private pension income to provide their income in retirement.

Figure 6: Average original income of those with and without private pensions

Download this chart Figure 6: Average original income of those with and without private pensions

Figure 7: Average disposable incomes with and without private pensions

Download this chart Figure 7: Average disposable incomes with and without private pensions

Figure 8: Ratio of the average disposable income of those with private pensions to those without

Download this chart Figure 8: Ratio of the average disposable income of those with private pensions to those without

In fact, cash benefits are the only income source that is higher for those who do not receive private pension income. For this reason, cash benefits have historically reduced the gap in average incomes between households with and without private pensions. However, since FYE 2011, despite annual increases in the rate of State Pension, the relative gap in disposable income has increased and is now at its largest since the series began (Figure 8). This shows that since FYE 2011, the growth in average income as a result of private pensions has outstripped the growth deriving from the State Pension.

The incomes of retired households now largely reflect both pension behaviour and pension policy in the past. Recent analysis of pension wealth show considerable changes over the past 40 years.

The number of employees enrolled into workplace pension schemes is at a record high, due in part to the effect of automatic enrolment since October 2012. The largest increases in participation between 2015 and 2016 were in defined contribution pension schemes. In these schemes, employer and employee pension contributions tend to be lower than for defined benefit schemes, and the effect of automatic enrolment has shown a step change in the data as the majority of employees have moved to paying greater than 0% but less than 4% of their pensionable income. This contrasts with the majority of employees in defined benefit schemes paying 7% of more of their pensionable income.

The Wealth and Assets Survey (WAS) also collects data on whether individuals are contributing to private pensions, but in addition estimates the value of these current pension pots as well as the value of any retained pension pots that the individual is no longer contributing to. Looking at wealth held by individuals in private pensions1 from which they were not yet drawing an income (accumulated wealth), the median amount of wealth in pensions that are not yet in payment is much higher for defined benefit pension schemes than defined contribution schemes (£63,400 and £15,000 respectively – see Table 6.8 from Wealth in Great Britain 2012 to 2014).

Notes for: What do we know about those currently saving for retirement using workplace pensions?

Under reforms brought in by the Pensions Act 2008, with updates in the Pensions Act 2011 and Pensions Act 2014, employers must enrol all eligible employees into a qualifying private pension. Workers can opt out but will be re-enrolled every 3 years and need to opt out each time. Automatic enrolment has a staged implementation to 2018 and started with the larger employers in 2012. (See also the section Workplace pension reforms, Pension Trends, Chapter 6: Private Pensions, 2013 edition, and Department for Work and Pensions: Automatic Enrolment Evaluation Report 2016).

A pension scheme in which the rules specify the rate of benefits to be paid. The most common defined benefit scheme is a salary-related scheme in which the benefits are based on the number of years of pensionable service, the accrual rate and either the final salary, the average of selected years’ salaries or the best year’s salary within a specified period before retirement.

A pension scheme in which the benefits are determined by the contributions paid into the scheme, the investment return on those contributions, and the type of annuity (if any) purchased upon retirement. It is also known as a money purchase scheme. Defined contribution pensions may be private, personal or stakeholder pensions.

An arrangement (other than accident or permanent health insurance) organised by an employer (or on behalf of a group of employers) to provide benefits for employees on their retirement and for their dependants on their death. In the private sector, private schemes are trust-based. Private pension schemes are a form of workplace pension.

A workplace pension is a pension that is provided or facilitated by a workplace, principally for employees. It includes both private pension schemes and all forms of group personal and group stakeholder pensions. Further definitional information is available in our Annual Survey of Hours and Earnings publication.