This release explores the use of the Internet by adults in Great Britain. It provides useful information for those interested in what adults use the Internet for, and on developments regarding mobile Internet access and use.

The estimates in this release were originally due to be published on 24 August 2012 in the Internet Access – Households and Individuals, 2012 statistical bulletin. These estimates were delayed due to a data collection problem. Consequently, the bulletin published on 24 August 2012 solely focussed on household Internet access and adults’ use of computers. A new survey for 2012 was carried out between August and October 2012, and the data collected have been used to compile this release.

This release reveals that adults aged 25 to 44 used the Internet more than any other age group to carry out a wide range of established ‘every day’ activities, such as personal banking; reading the news; buying groceries, household goods and clothes. However, for new activities such as social networking, which did not exist prior to the creation of the Internet, those aged 16 to 24 lead the way.

In the infancy of the Internet, the main way of access was via a personal computer. New ways of accessing the Internet have developed in recent years, with those adults aged 16 to 24 adopting these new technologies at a faster rate than any other age group, especially via the use of Internet enabled mobile phones.

The results in this release are derived from the Opinions and Lifestyles survey. On 20 February 2013, ONS published the latest quarterly statistics on adults who had ever or never used the Internet within the Internet Access Quarterly Update, Q4 2012 statistical bulletin. The quarterly estimates are derived from the Labour Force Survey (LFS). The LFS has a much larger sample than the Opinions and Lifestyles survey and therefore allows for more detailed socio-demographic analysis to be undertaken. The Quarterly Update should be used as ONS’s official source for the number of individuals in Great Britain accessing the Internet.

ONS first collected statistics on Internet access in 1998. Since then, a number of changes have been made to the Internet Access survey, including the publication of annual results since 2006. Where possible, comparisons over time are made in this release. However, the available coverage in time series comparisons varies, because the questions included in the survey vary each year.

We are constantly aiming to improve this release and its associated commentary. We would welcome any feedback you might have, and would be particularly interested in knowing how you make use of these data to inform your work. Please contact us via email: esociety@ons.gov.uk or telephone David Matthews on +44 (0)1633 456756.

On 20 February 2012, as part of the Internet Access Quarterly Update, ONS reported that 42 million people in Great Britain have used the Internet, representing approximately 85% of the adult population.

Social networking has broad appeal and, although its use declines as age increases, it is not exclusively limited to younger age groups. In 2012, 62% of adults aged 35 to 44, and 40% of adults aged 45 to 54 used social networks to communicate online. 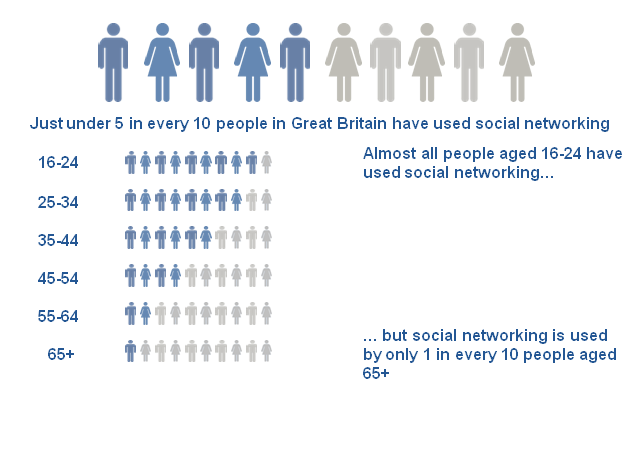 This recent and large growth in social networking can partly be explained by increasingly mobile Internet use in Great Britain. In 2012, a third of all adults reported accessing social networking websites or applications via a mobile phone (or other handheld device such as a MP3 player, e-book reader or games console). Those aged 16 to 24 reported the highest use of mobile social networking with almost three-quarters (72%) of adults in this age-group reporting this form of access.

Using a slightly broader definition of social networking, in which ‘posting messages to chat sites, blogs, newsgroups, discussion forums and the use of Instant Messaging (IM)’ are included, Eurostat recently published estimates covering the period 2009 to 2012. Out of the 26 countries reported, all, with the exception of Germany, reported an increase in social networking over the period. In 2012, the UK was ranked fourth in respect of the proportion of adults who make use of social networking, behind Norway, Netherlands and Iceland.

There are distinct differences in how individuals make use of the Internet when analysed by age. As ‘early-adopters’, it is of little surprise that those adults aged 16 to 24 are proportionately, the largest users of many of the available Internet activities. In 2012, this age group were most likely to engage in online activities that focused on leisure or recreation; especially new activities such as social networking (87%), posting messages to chat sites/forums/blogs (60%) or playing or downloading games/films/music (67%).

There is growing popularity among slightly older age groups; particularly those aged 25 to 34, to engage in online activities which are based on more ‘established’ activities such as personal banking or shopping. Previously, whereas people would have traditionally headed to the high street to shop, bank or send a letter, there are now new online ways of carrying out these activities via websites, or increasingly, mobile applications. Adults aged 25 to 34 reported the highest level of use in activities such as; online shopping (87%), use of email (87%), Internet banking (69%) and reading online news/newspapers (66%).

For most activities first surveyed in 2007 there has been a sizeable increase in use between 2007 and 2012. Of particular note, there has been a sizable increase in the proportion of adults making telephone or video calls over the Internet (e.g. Skype). From a slow uptake between 2007 (8%) and 2010 (18%), use has almost doubled over the past two years, to nearly a third of adults (32%) in 2012 now partaking in this activity.

The initial Internet Access Households and Individuals 2012, Part 1 release reported that 93% of households with Internet access in Great Britain connected via a broadband connection. As people demand faster Internet connections it is unsurprising that multimedia activities such as watching web television or listening to web radio have increased in popularity, from 17% of adults in 2007 to 38% in 2012. This is likely to increase in the future as digital TV providers are increasingly offering more downloadable content via the Internet.

There is a noticeable difference in the type of goods bought online, when analysed by age. In 2012, only 18% of those aged 16 to 24 bought holiday accommodation online, compared with 42% of those aged 35 to 44.

Clothes or sports goods were the most popular online purchase in 2012, purchased by 42% of adults. Those aged 35 to 44 were most likely to buy these items (59%).

Figure 5: Internet shopping in the last 12 months, by age group

Download this chart Figure 5: Internet shopping in the last 12 months, by age group

Proportionately, more women purchased clothes and sports goods, books, magazines and newspapers, food and groceries than men. In contrast, men purchased in greater proportions than women, across a range of categories, in particular electronic equipment, video games, films, and computer hardware and software.

Download this chart Figure 6: Purchases made over the Internet in the last 12 months, by sex, 2012

Over the past 10 years the way in which people access the Internet has changed. When the Internet first became available, the only way that the majority of adults could gain access was from their home or at work. Increasingly Internet use ‘on the go’ (outside of the home or work) has become a viable option and is now a popular means of accessing the Internet on a daily basis.

The term ‘portable computer’ used to be assigned to the use of a laptop, notebook or netbook. However, there has been very large growth, recently, in the use of tablet computers such as Apple iPads or Samsung Galaxy tablets. In 2012, 21% of adults used a tablet to access the Internet away from the home or work. This, again, was more prevalent among the younger age groups, with those aged 16 to 24 reporting the highest use (37%).

Despite this rapid growth in the use of tablet computers, more people (34%) still accessed the Internet ‘on the go’ over a laptop (or notebook / netbook) in 2012 making it the most popular form of portable computing. It will be interesting to see if this changes in future years as tablets seem to be continuing to increase in popularity.

In 2012, 18% of adults used a portable computer (tablet, laptop etc) every day to access the Internet away from home or work. More than a quarter of those aged under 45 accessed the Internet daily this way, with the highest use (31%) reported by those aged 25 to 34.

Figure 7: Frequency of Internet use ‘on the go’ via a laptop, netbook or other portable computer, by age group, 2012

Download this chart Figure 7: Frequency of Internet use ‘on the go’ via a laptop, netbook or other portable computer, by age group, 2012

Figure 8: Internet use over a mobile phone

Download this chart Figure 8: Internet use over a mobile phone

Figure 9: Frequency of Internet use ‘on the go’ via a mobile phone or other handheld device, by age group, 2012

Download this chart Figure 9: Frequency of Internet use ‘on the go’ via a mobile phone or other handheld device, by age group, 2012

Figure 10: Activities using mobile phones or other handheld devices ‘on the go’ in the last three months, by age group, 2012

Download this chart Figure 10: Activities using mobile phones or other handheld devices ‘on the go’ in the last three months, by age group, 2012

Almost a third of non-users (31%) aged 16 to 24 said that the cost of a portable web-enabled device or associated subscription prevented them using the Internet this way.