2012 to 2014 estimates of disability-free life expectancy for males and females in upper tier local authorities, England at birth and at age 65.

Males at birth could expect to spend a greater proportion (79.5%) of their lives free from disability compared with females (76.0%).

Males and females living in the South East, South West and East of England could expect to spend more years disability-free compared with those living in other regions.

The inequality in disability-free life expectancy (DFLE) at birth across upper tier local authorities was wider for females (19.4 years) than males (16.8 years).

Tower Hamlets had the shortest DFLE at birth for both males (55.1 years) and females (52.7 years).

What are health expectancies?

This bulletin focuses on the latest data: 2012 to 2014 DFLE for upper tier local authorities in England. DFLE data between 2006 to 2008 and 2011 to 2013 are also included in the datasets that accompany this bulletin.

Males at birth could expect to spend a higher proportion (79.5%) of their lives free from disability compared with females (76.0%).

Males and females living in the southern regions could expect to spend a greater number of years disability-free compared with those living in other regions.

Download this table Table 1: Life expectancy (LE), disability-free life expectancy (DFLE) and proportion of life spent free from disability by region for males and females at birth, 2012 to 2014, England

Download this table Table 2: Life expectancy (LE), disability-free life expectancy (DFLE) and proportion of life spent free from disability by region for men and women at 65, 2012 to 2014, England

The gap in disability-free life expectancy at birth between upper tier local authorities exceeds 16 years for males and 19 years for females.

Each upper tier local authority (UTLA) was ranked from highest (1) to lowest (150) based on their disability-free life expectancy (DFLE) estimate. Figure 3 shows the top and bottom 5 UTLAs for males and females at birth (data for all 150 UTLAs can be found in the datasets for this release). The UTLA with the longest DFLE estimate for males was Wokingham (71.9 years) and the shortest DFLE was in Tower Hamlets (55.1 years). For females, the longest DFLE was in Richmond upon Thames at 72.1 years, while Tower Hamlets had the shortest DFLE at 52.7 years. Therefore, males in Wokingham and females in Richmond upon Thames could expect to live an extra 16.8 years and 19.4 years (respectively) free from disability compared with those living in Tower Hamlets.

Figure 3: Disability-free life expectancy by upper tier local authorities for males and females at birth, 2012 to 2014

Download this image Figure 3: Disability-free life expectancy by upper tier local authorities for males and females at birth, 2012 to 2014

Figure 4 shows the top and bottom 5 UTLAs for men and women at age 65. Similar to the DFLE estimates at birth, men living in Wokingham and women living in Richmond upon Thames could also expect to live the most number of years free from disability (14.0 and 16.7 years, respectively). In contrast, men in Newham and women in Tower Hamlets could expect to spend the least number of years free from disability (2.8 years and 3.3 years, respectively). This shows an inequality of 11.2 years and 13.3 years for men and women (respectively) between the UTLAs.

Figure 4: Disability-free life expectancy by upper tier local authorities for men and women at age 65, 2012 to 2014 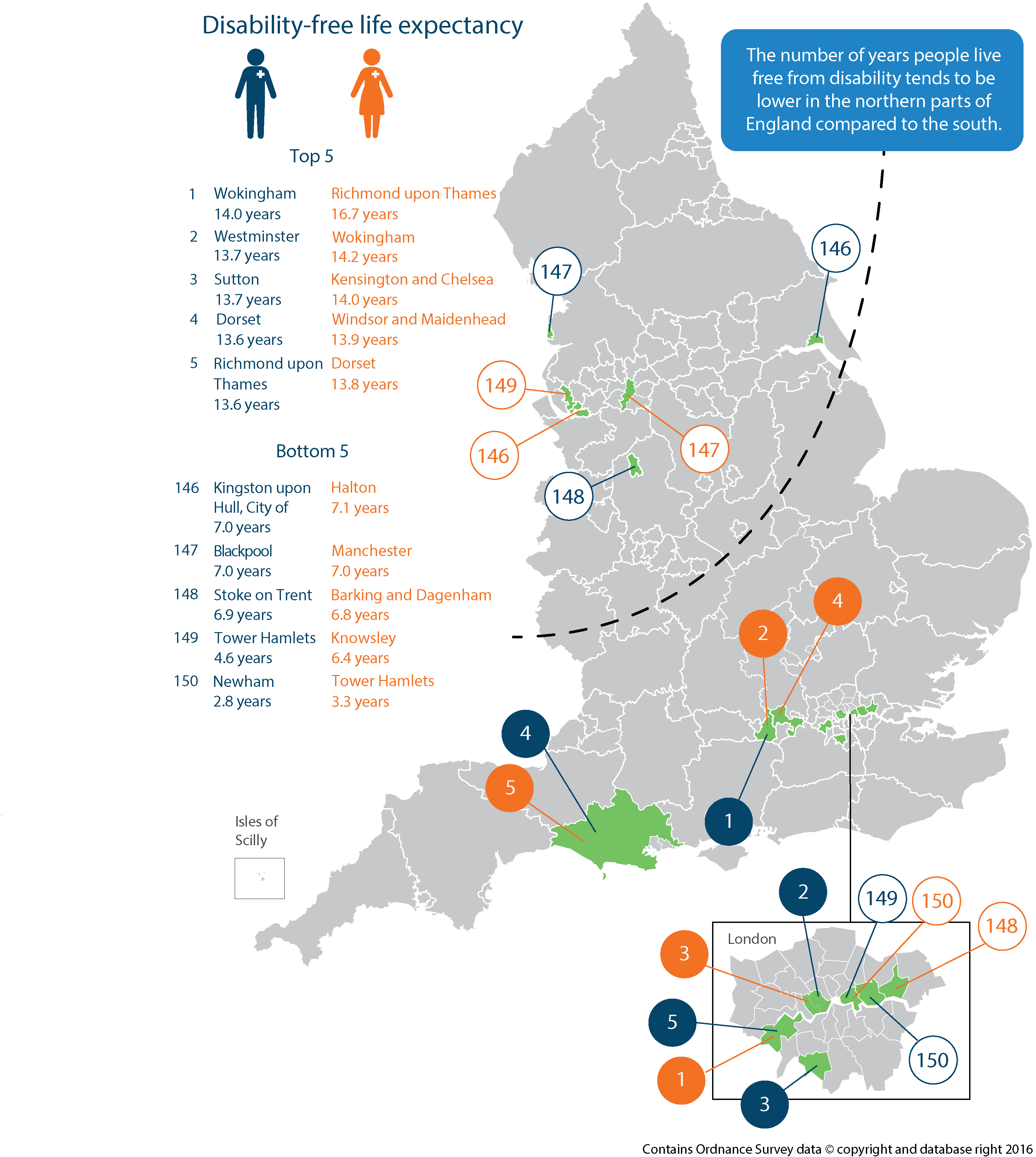 Download this image Figure 4: Disability-free life expectancy by upper tier local authorities for men and women at age 65, 2012 to 2014

The disability questions on the Annual Population Survey (APS) have undergone a number of changes since 2010 and as a result data are not comparable over time. There are 2 sets of changes that have resulted in discontinuities in the time series:

These changes have resulted in differences in the number of people reporting disabilities. Therefore, estimates either side of the discontinuity (before and after April 2013) should not be directly compared. As the DFLE data is aggregated over a 3 year period, the 2012 to 2014 dataset includes a combination of APS data based on the old disability questions and data on the new disability questions.

Therefore no comparisons have been made in this bulletin of DFLE over time.

The prevalence of disability data used to calculate DFLE was obtained from the Annual Population Survey (APS). Questions on the APS are derived from the Labour Force Survey (LFS), which is a longitudinal survey where data is collected from participants over 5 waves (5 times on a quarterly basis). The APS uses unique waves from the LFS (often waves 1 and 5) to avoid the use of multiple responses from the same participants. Data from the APS is aggregated over a 3 year period to achieve sufficiently large sample sizes and enable meaningful statistical comparisons. Data is provided for males and females living in private households in England and compared across regions and upper tier local authorities (UTLAs) (including unitary authorities, London boroughs and metropolitan districts). The analysis excludes data collected from the City of London and Isles of Scilly because of their small sample sizes.

The disability questions on the APS have undergone a number of changes since 2010, making it difficult to compare DFLE over time. In January 2010, the introductory paragraph of the disability section was reworded. In April 2013, the wording of the disability questions (presented in Table 3) were changed in order to bring them in line with the Government Statistical Service (GSS) Harmonised Standards for questions on disability, which in turn are designed to be consistent with the 2010 Equality Act. Therefore, estimates either side of the discontinuity (before and after April 2013) are not directly comparable. As the DFLE data is aggregated over a 3 year period, the 2012 to 2014 dataset includes a combination of APS data based on the old disability questions and data on the new disability questions. However, the new data is deemed sufficiently accurate for public use. Further information on the questions and derived variables can be found in the LFS user guides.

Table 3: Changes to the disability questions in the Annual Population Survey from April 2013

Download this table Table 3: Changes to the disability questions in the Annual Population Survey from April 2013

DFLE was calculated using the Sullivan method (Jagger et al, 2007). This method involves combining disability prevalence data with mortality and mid-year population estimates (used to calculate life expectancy), over the same period and geographical coverage. DFLE estimates are calculated at birth and age 65 for both sexes. The APS provides prevalence data for individuals aged 16 and over. It is possible to estimate DFLE at birth by directly imputing disability prevalence at age 16 to 19 for those under 16 (ONS, 2013). The age band structure used for calculating DFLE is not that outlined in the update to methodology to calculate health expectancies (ONS, 2013) but the traditional age band structure of <1, 1 to 4, 5 to 9, 10 to 14, 15 to 19……85 and over.

DFLE at a given age for a specific period and population, such as at birth in 2012 to 2014, at the UTLA level, is an estimate of the average number of years a person can expect to live without a limiting long-term illness (or disability). This is only if they experienced the specified population’s age-specific mortality and disability rates for that time period throughout the rest of their life.

The figures reflect the mortality and health status of a population in a given time period residing in that area, rather than only those born in the area. It is therefore not the number of years that a person will actually expect to live free from disability. This is because both the death rates and health status of the specified population are likely to change in the future, due to changing attitudes to health, availability of treatments, healthcare and people moving in and out of the area.

Results are comparable by age, sex and between specified populations as health expectancies take into account differences in the age structures of populations.

Life expectancy (LE) has increased considerably since the 1980s and is expected to increase further (ONS 2014a). As LE continues to increase, it is important that these additional years are not spent in poor or disabling health states. If this is the case, it can put greater strain on health and social care resources. Therefore health expectancy estimates are used to monitor whether the “extra” years are spent in favourable health.

Survey measures of general health and limiting persistent illness are used to identify health inequalities between administrative areas, inform unmet health and social care needs, and target and monitor the allocation of health resources amongst population groups (Marmot, 2010). International organisations and networks such as the World Health Organisation, Eurostat and the Reves Network on Health Expectancy use this information to compare morbidity across countries, and to monitor trends over time.

If you have any comments or suggestions, we would like to hear them. Please email us at hle@ons.gov.uk.