Lesbian, gay, and bisexual people say they experience a lower quality of life

People who identify as lesbian, gay, and bisexual (LGB) tend to rate their quality of life as lower than the UK average, ONS analysis shows.

By publishing this analysis as Pride takes place around the world, we mark the celebration of equality and diversity by contributing to the debate around societal inequalities in regards to sexual identity.

Understanding how people feel about their lives and how that links with sexual identity is key to the ongoing issue of how policy makers can address these inequalities.

Across all positive ONS metrics of quality of life1, life satisfaction, happiness, and perception that things they do in life are worthwhile, people who were heterosexual or straight rated each of these aspects of quality of life higher than their LGB counterparts.

Note: Lighter coloured bars, and heterosexual or straight bars are not statistically significant

Those who identify as “other” or “do not know or refuse” also said they had lower life satisfaction, happiness, and worthwhile than the UK average.

How big is the LGB community in the UK?

ONS figures2 based on the 2015 Annual Population Survey suggest there are an estimated 920,000 people in the UK who identify as gay, lesbian, or bisexual, making up 1.7% of the population. London has the highest proportion of LGB-identifying population.

According to the same ONS figures, more men say they identify as LGB than women, but more women than men identify as bisexual. Another 2.2 million people say they don’t know, or refuse to answer, while an estimated 206,000 identify as "other". 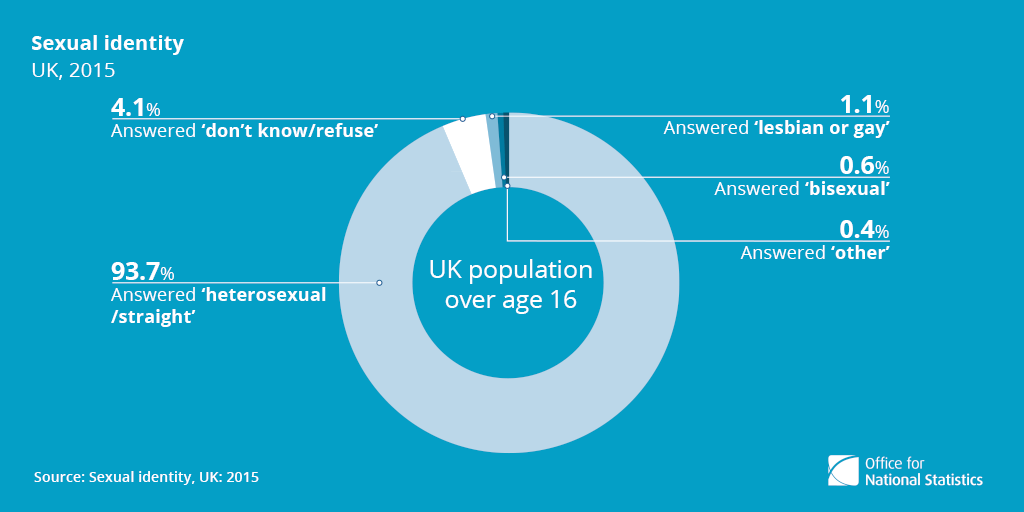 Note: Numbers do not add up to 100% due to rounding

Discrimination may explain some of these differences

We don’t actually know why people belonging to the LGB community report lower quality of life. This analysis is an initial step towards highlighting differences but does not take into account a range of factors known to influence well-being when comparing groups. Research carried out by Stonewall found that one in five LGB employees experienced verbal bullying, and a quarter of them were not open to colleagues about their sexual orientation.

The National Institute of Economic and Social Research published a report which found LGB people were more likely to suffer with mental health problems. It outlined potential exposure to discrimination and harassment in relation to all aspects of life, including health service access, education, and employment.

Some 12% of all hate crimes in England and Wales in 2015 to 16 were related to sexual orientation, according to Home Office figures, with 7,194 sexual orientation hate crimes recorded. However, only a quarter of people who are victims of such hate crimes actually report it (Galop’s 2016 Hate Crime Report PDF), so these incidents are vastly under-reported. Crime Survey estimates suggest that between 2012 and 2015 there were, on average, 29,000 sexual orientation-related hate crimes each year.

2017: Personal well-being and sexual identity analysed together for the first time

There are calls to include questions on sexual identity on the 2021 Census for the first time. We are exploring this as a possible opportunity to gather more comprehensive, in-depth data that would help policy makers to have a better understanding of the LGB community in England and Wales.