Ethnicity1 and national identity2 are important defining characteristics of our population. The 2011 Census highlighted the increasing diversity of England and Wales, and for the first time introduced a question on national identity.

This information is important as it helps to ensure that different groups are recognised and are provided with equal opportunities.

A picture of increased ethnic diversity

The Asian/Asian British ethnic group categories also saw some large increases. People who identified with Pakistani and Indian each rose by around 400,000 since 2001. 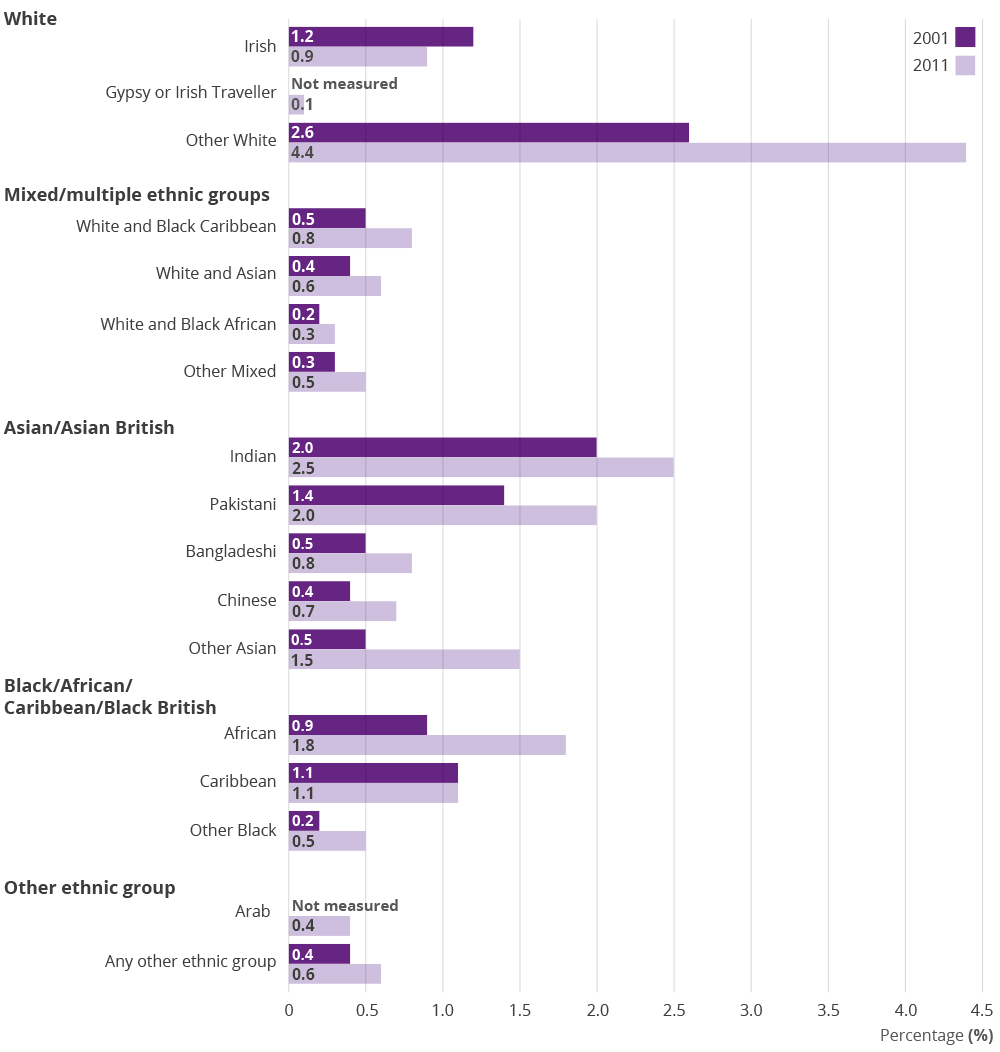 The vast majority of people (91%) living in England and Wales identified with at least one UK national identity (English, Welsh, Scottish, Northern Irish, and British). English identity (either on its own or combined with other identities) was chosen by 37.6 million people (67%).  The highest percentage of the population identifying as English was in the North East at 80.5%.

One in eight foreign born residents identified as White British

Migration patterns to the UK have been shown to differ across ethnic groups. There can be numerous reasons for this that can include historic and commonwealth ties, legislative changes, personal, economic and cultural issues and circumstances.

Data has shown that in 2011, 7.5 million people were born outside of the UK (13% of the population). Of the foreign born population almost half (46%) identified as White with the majority being Other White (28%) and White British (13%), many of whom will have been born to British people living temporarily overseas, often working in the armed forces. One third identified with Asian (33%) and 13% identified with Black/African/Caribbean/Black British.

The largest ethnic minority group for the foreign born population was Other White (2.1 million people); the majority (71%) arrived in the UK between 2001 and 2011 reflecting the increase in migrants following Central and Eastern European countries joining the European Union in 2004.

Highest employment rate among the 'Other White' ethnic group

Economic inactivity rates were higher for women (28%) than for men (18%) overall and reasons for them both varied. For women, the main reason behind economic inactivity was that they are looking after the family or home (31%), while men were most likely to be economically inactive due to being a student (37%).

Around 1 in 10 people were in an inter-ethnic relationship

Of all people who were in inter-ethnic relationships, 4 in 10 were with someone who was White British. The most common being Other White and White British (16%).

People identifying with Mixed/Multiple groups were the most likely to be in an inter-ethnic relationship (over 8 in 10 or 195,000 people), and are themselves likely to be the result of inter-ethnic relationships that have emerged in the last 60 years (from post war immigration patterns). These groups have a much younger age profile than some of the other ethnic groups and 80% of the people in this group were born in the UK.[]10