Marriages in England and Wales (Provisional): 2012

Number of marriages that took place in England and Wales analysed by age, sex, previous marital status and civil or religious ceremony.

Marriage statistics for 2012 are rounded and provisional. Figures for 2012 will be finalised in early 2015 when the majority of marriage returns have been received from register offices and the clergy. In 2011, the number of marriages in England and Wales increased by over 1,200 (0.5%) between the provisional first release of figures and the finalised statistics.

This is the first time that ONS has published final 2011 and provisional 2012 marriage statistics for England and Wales.

The publication of Marriages in England and Wales (provisional) 2012 is later than originally planned. Changes in data collection methodology (see background note 3) required more time to be spent on detailed quality assurance. Once the new data collection processes are well established, ONS hope to bring forward the release of final annual marriage statistics to around 15 months after the end of the data year. This would mean that final annual figures would be released around the time that provisional figures are currently published, and the provisional publication would be discontinued. ONS will monitor the receipt of marriage registrations over the next year to determine whether such a change is possible. 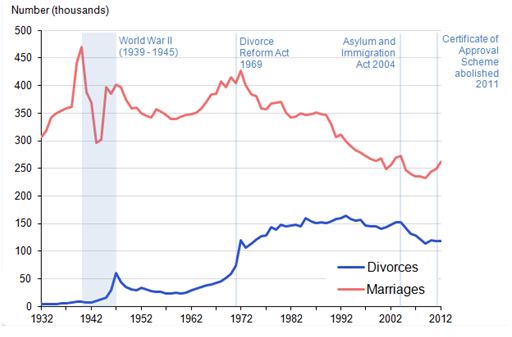 Over the past 20 years, there has been a rise in the number of cohabiting adults in the UK. The number of opposite sex cohabiting couple families increased significantly between 2002 and 2012, from 2.1 million to 2.9 million (Families and Households, 2012). Attitudes towards cohabitation have also changed. The 2006 British Social Attitudes survey found two thirds of respondents thought there was ‘little difference socially between being married and living together as a couple’ (Beaujouan and Bhrolcháin, 2011).

The largest percentage decline in the number of marriages since 1972 was recorded between 2004 and 2005, when the number of marriages fell by 9.3%. This could be related to the introduction of the Certificate of Approval Scheme included in the Asylum and Immigration (Treatment of Claimants, etc.) Act 2004, which was introduced on 1 February 2005 to prevent the use of marriage to circumvent UK immigration control (‘sham marriages’). The scheme made it increasingly difficult for a sham marriage to take place and could therefore have reduced the number of such marriages. In addition there may have been people marrying legitimately who were either deterred from marrying or whose marriage was delayed by the legislation. These measures were abolished in May 2011. Entering into a sham marriage does not entitle migrants to any right to remain in the UK. The Home Office continues to investigate suspected abuse with assistance from Registrars and members of the clergy, disrupting marriages where possible, before they take place. See background note 7 for more information on these changes to marriage legislation. 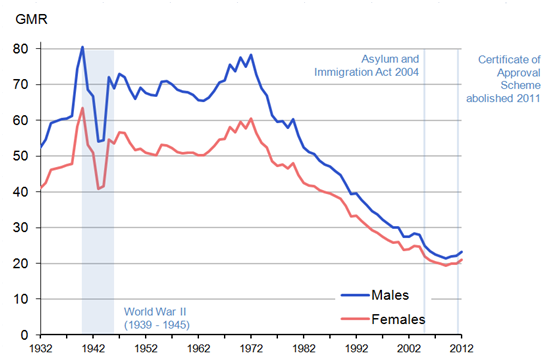 Religious marriages other than those solemnised according to the rites and ceremonies of the Church of England, Church in Wales, Society of Friends or of the Jewish religion must usually take place in a building registered for marriages. All buildings registered for religious marriage must also be certified as a place of worship.

For the eighth consecutive year, there were fewer religious ceremonies than ceremonies in approved premises. While not necessarily linked, such trends mirror the findings of the 2011 Census, where the number of people who declare themselves as Christians in England and Wales had fallen from 72% in 2001 to 59% in 2011. Over the same period, the number reporting no religion rose from 15% to 25%.

Provisional marriage figures for 2012 suggest that Church of England and Church in Wales marriages have increased by 6.2% in 2012 to 57,860, from 54,463 in 2011. Similarly there has been a rise of 0.6% in the number of Roman Catholic marriages, while there was a decrease in the number of marriages to ‘Other Christian Denominations’ of 1.6%. The number of ceremonies to ‘other’ religions, including Sikh, Muslim and Jews, has also increased by 6.0% (see Table 1, Summary of marriage characteristics (199.5 Kb Excel sheet) ).

Figure 3 shows the age at marriage for men and women in 2012. At younger ages there were more women than men marrying; however, at older ages more men than women married. This pattern reflects that, on average, men tend to form relationships with women younger than themselves. In 2012, the number of marriages was greatest among men and women aged 25 to 29.

Download this chart Figure 3: Age at marriage for men and women, 2012

Since 1972 the mean age at first marriage has increased by almost eight years for both men and women. In 2012 the provisional mean age at marriage for never-married men was 32.4 years, while for never married women it was 30.3 years. This compares with 24.9 years and 22.9 years respectively in 1972.

The greatest decline in the proportions who have ever married were for men and women in their late teens and twenties. Of those born in 1930, 51% of men and 74% of women were married by the age of 25, compared with only 5% of men and 11% of women born in 1987 (the most recent birth cohort to reach age 25 in marriage data).

These figures reflect the increasing proportion of men and women delaying marriage or not getting married at all.

For those marrying in the most recent years, since 2000, the percentage of marriages ending in divorce (486 Kb Excel sheet) appears to be falling. This recent decrease may be related to the following two factors:

Annual marriage figures for the UK and constituent countries can be found in the Vital Statistics: Population and Health Reference tables.

Further statistics on civil partnerships can be found on the ONS website.

Civil Partnerships five years on examines civil partnerships in England and Wales, comparing them with the characteristics of those marrying over the same period (2005 to 2010).

Marital status estimates for 2011 and 2012 are not currently scheduled for publication. ONS has undertaken an internal review to ascertain whether the current output and methods used to produce the output are fit for purpose. A consultation proposing changes to both the published tables and methods used to produce them is available on the ONS website. The consultation closes on 11 July 2014.

The Marriage (Same Sex Couples) Act 2013 makes provision for the marriage of same sex couples in England and Wales, either in a civil ceremony (in a register office or approved premise, for example a hotel) or on religious premises (provided that the religious organisation concerned is in agreement with the marriage being solemnised through a religious ceremony).

ONS ran a public consultation on user requirements for marriage, divorce and civil partnership statistics for England and Wales from 8 October 2013 to 17 December 2013. In response to this consultation, ONS intends to change the way in which marriages, divorces and civil partnerships data are published from 2015 onwards. ONS plan to publish a selection of summary tables for each topic; these summary tables will provide a significant time series for comparison. Alongside these summary tables, ONS plans to publish explorable datasets and anonymised microdata, both of which can be used to obtain more detailed statistics for a particular calendar year. A document (101.3 Kb Pdf) summarising responses to the consultation and future plans is published on the ONS website.

The distinction between cohabitation and marriage is of importance to policy makers, as well as to social and political commentators. Issues of policy interest include legal rights and responsibilities of cohabiting partners, the welfare of children of unmarried parents, the stability of family forms, housing demand, and lone parent families.

Lawyers, solicitors and those involved in family law, as well as academics and researchers in demography and social sciences, are often interested in marriage statistics.

Those involved in the 'marriage business', for example hotels and catering businesses, bridal shops and wedding planners, often wish to see marriage statistics. The clergy and in particular the Church of England are also interested in marriage statistics by area, and the number of religious marriages taking place each year.

More data on Marriages in England and Wales in 2012 are available on the Office for National Statistics (ONS) website.

ONS Marriages Quality and Methodology Information (214.1 Kb Pdf) provides overview notes which pull together key qualitative information on the various dimensions of quality as well as providing a summary of methods used to compile the output.

Annual marriage figures for the UK and constituent countries can be found in the Vital Statistics: Population and Health Reference tables.

Beaujouan E and Bhrolcháin M (2011) Cohabitation and marriage in Britain since the 1970s, Population Trends 145.

ONS (2013) STY What percentages of marriage end in divorce?