Families and households in the UK: 2013

Trends in living arrangements including families (with and without dependent children), people living alone and people in shared accommodation, broken down by size and type of household.

The bulletin also presents statistics on the number of households by type, household size and people living alone for 1996 to 2013. Only the statistics for 2013 are published for the first time today. 1996 is the earliest year for which these data are available on a consistent basis.

Minor annual revisions due to survey reweighting, which are usually undertaken each year, have not been made to previously published estimates this year.

The statistics are used by those who want to improve their understanding of the UK’s families and households including:

Figure 1 shows that the most common family type in the UK in 2013 was a married or civil partner couple family without dependent children. There were 7.7 million such families in 2013, an increase of nearly 200,000 (3%) since 2003. This increase is driven by a rise in the number of married couples with only non-dependent (adult) children as young adults have either delayed leaving the parental home or have returned to it. Statistics published in 2012 show that there was a 20% increase in the number of 20 to 34 year olds living with their parents between 1997 and 2011.

Table 1 shows that the total number of families in the UK has increased from 17.1 million in 2003 to 18.2 million in 2013. This is a rise of 7%, similar to the growth in the UK population during this period.

The number of married couple families increased by 56,000 between 2003 and 2013, to 12.3 million in 2013. This rise is not statistically significant. The change in opposite sex cohabiting couple families between 2003 and 2013 is statistically significant, rising from 2.2 million to 2.9 million. In 2013 there were an estimated 89,000 families consisting of a same sex cohabiting couple and 63,000 consisting of a civil partnered couple, the latter having steadily increased since the introduction of civil partnerships in the UK in December 2005.

In 2013, women accounted for 91% of lone parents with dependent children and men the remaining 9%. These percentages have changed little over the previous decade. Women are more likely to take the main caring responsibilities for any children when relationships break down, and therefore become lone parents. 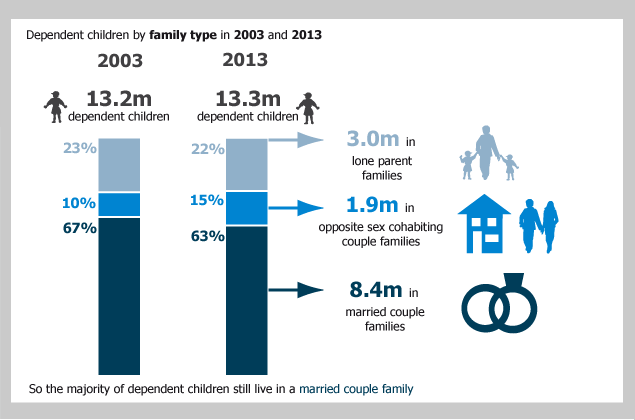 Download this image Figure 3: Percentage of dependent children: by family type, 2003 and 2013

In comparison with the rest of Europe, a slightly lower proportion of households in the UK contain dependent children than the European average. One possible reason for this is that, although current UK fertility is relatively high, a larger proportion of women remain childless by the end of their childbearing years in the UK than in most other European countries1.

A household is defined as one person living alone, or a group of people (not necessarily related) living at the same address who share cooking facilities and share a living room, sitting room or dining area. A household can consist of more than one family, or no families in the case of a group of unrelated people.

There were 26.4 million households in the UK in 2013. Household size in 2013 is shown in Figure 5. The number of households has increased by 6% since 2003, similar to the growth in the UK population during this period. As a result average household sizes have changed little over this period: 20% of households contained four or more people in 2013, very similar to a decade earlier, while 29% of households contained one person. A different source, the General Lifestyle Survey1, which provides a longer time series, shows that 17% of households in Great Britain contained one person in 1971. Although not directly comparable, this is 12 percentage points lower than the Labour Force Survey shows for the UK in 2013.

Figure 5: Percentage of households by household size in 2013

Download this image Figure 5: Percentage of households by household size in 2013

The percentage of UK households which contain one person (29%) is similar to the European average2 of 30%. In 2013, the average number of people per household was 2.4, the same as the European average. According to the 2011 Census3, of the UK constituent countries, Northern Ireland had the highest average number of people per household at 2.5 and Scotland had the lowest at 2.2.

Download this table Table 2: Households by household type in 2003 and 2013

The next most common household type was one person households, of which there were 7.7 million in 2013. UK households containing one lone parent family increased from 2.5 million in 2003 to 2.8 million a decade later. Although international comparisons are not straightforward due to definitional differences, the proportion of households in the UK which consist of a lone parent with dependent children is much higher than the European average1; only five countries (Belgium, Ireland, Latvia, Lithuania and Norway) have a higher proportion.

Households containing two or more families were the fastest growing household type, increasing by 39% from 206,000 households in 2003 to 286,000 households in 2013. Despite this rise, multi-family households still only represented a very small proportion (1%) of all households in 2013. Figure 6 shows that growth was observed between 1996 and 2013, with larger estimates in 2012 and 2013. Families in these households may be unrelated, or may be related in some way, for example a married couple with their son and his girlfriend.

In 2013, 7.7 million people in UK households lived alone, of which 4.1 million were aged 16 to 64. Of those in this age group, the majority (58%) were male. One possible reason for this is that at every age a higher proportion of men than women have never married; 61% of men aged 16 to 64 living alone have never married compared with 49% of women living alone in the same age group.

For those aged 65 or over, the pattern is reversed; at this age the majority of people living alone (68%) were female. This is partly because there are more women than men in the total population aged 65 or over due to women’s higher life expectancy. There are 1.7 million widowed women aged 65 or over living alone in the UK, three times the number of men. By the age of 65 most women have been married1, and husbands are typically older than their wives. These two factors accentuate the gap in life expectancy between husbands and wives, and mean that more wives than husbands become widowed, despite the falling number of widowed women in the population.

Figure 7 shows the trends in the number of people living alone by age group between 2003 and 2013. The largest change is in the 45 to 64 age group, where the number of people living alone increased by 28% between 2003 and 2013. This is partly due to the increasing population aged 45 to 64 in the UK over this period, as the 1960s baby boom generation have started to enter this age group. The increase in those living alone also coincides with a decrease in the percentage of those in this age group who are married (from 76% in 2003 to 69% in 2013), and a rise in the percentage of those aged 45 to 64 who have never married, or are divorced (from 20% in 2003 to 28% a decade later).

The number of people in the UK aged 16 to 44 increased slightly between 2003 and 2013 but the number living alone in this age group fell by 19% to 1.7 million in 2013. Previous research has shown that the proportion of those aged 20 to 34 living with their parents has increased over the past decade2. Affordability of moving out of the parental home has been cited as a possible factor in this increase. In addition, academic research3 has illustrated that there has been a shift towards sharing with others outside a family among young adults.

Analysis of families and households in England and Wales using the 2011 Census is available on the ONS website. This includes interactive maps of those living alone and of lone parent households.

Tables from the 2011 Census about families and households are available for England and Wales on the nomis website. Census results are also available for Northern Ireland and Scotland. The Census is the best source of information for families and households statistics for local authorities and smaller areas. Particularly relevant tables for England and Wales include:

At the time of the publication of these statistics, few UK statistics about families or households from the 2011 Census have been published. However, initial comparisons between the 2011 Census and the source of the estimates in this publication (the Labour Force Survey) for England and Wales indicate that the two sources provide estimates which are generally very close. The following show the percentage difference between the 2011 Labour Force Survey and Census for different estimates:

Neither source of data is wrong. As both sources are collected in different ways, the following could be possible reasons for differences in estimates between the sources:

The Office for National Statistics will publish more information about the differences between both sources once more estimates about families and households for the UK are available from the 2011 Census and the Labour Force Survey has been reweighted.

Notes for comparisons with results from the 2011 Census

Data tables (418.5 Kb Excel sheet) about families and households were published on 31 October 2013.

Also available on the ONS website is a Quality and Methodology Information Report (245.9 Kb Pdf) for these statistics, and information about people who use statistics on families and households (47.8 Kb Pdf) and what they use the statistics for.

Further statistics on marriages, divorces and civil partnerships are available on the ONS website.

The General Lifestyle Survey provides statistics on households, families, marriages and cohabitation back to the 1970s.

The Overview of Population Statistics outlines the range of demographic statistics which are published by ONS.