Estimates of the Very Old (including Centenarians) for England and Wales: United Kingdom 2002 to 2013

People in the oldest age groups in the UK (90 to 104 and 105 and over) by sex and age, and comparisons of the populations in the 4 constituent countries of the UK and internationally.

The Office for National Statistics (ONS) has released today Estimates of the Very Old (including Centenarians) 2002-2013 in England and Wales and the United Kingdom (UK). These are annual mid-year estimates by sex and single year of age for people aged 90 to 104 and for the 105 and over age group. Figures for 2013 are published for the first time today. Figures for 2002-2012 update the figures previously published in September 2013 for England and Wales and in March 2014 for the UK.

Corresponding estimates for Scotland and for Northern Ireland for 2002-2013 are also published today by National Records of Scotland (NRS) and Northern Ireland Statistics and Research Agency (NISRA) respectively.

The numbers of the ‘oldest old’ is of policy interest because of implications for pensions, health and social care.

Interest in population estimates at the oldest ages by single year of age has increased as life expectancy has risen and the number of those aged 90 and over has grown.

Until 2006 the Government Actuary’s Department calculated population estimates for single years of age beyond 90 for each of the UK countries. Although these estimates were made available for research purposes1, they were not officially published. Since 2006 these estimates have been produced by the Office for National Statistics (ONS).

In 2011 the estimates were assessed by the UK Statistics Authority and have since been published as National Statistics.

Within ONS, Estimates of the Very Old are primarily used in the production of National Life Tables and National Population Projections. Other uses include answering parliamentary questions, responding to media interest and responding to customer enquiries.

Outside ONS the estimates are used by:

Estimates of the Very Old for England and Wales (and for Scotland and Northern Ireland) are produced using the Kannisto-Thatcher (KT) method.

The KT method produces estimates of population at older ages using 'age at death' data. These data are used to build up distribution profiles of the numbers of older people in England and Wales. For example, if someone dies in 2012 aged 105, this means that they were alive and aged 104 in 2011 and 103 in 2010 etc. By collating ‘age at death’ data for a series of years, it becomes possible to make an estimate of the number of people of a given age alive in any particular year and so create age distribution profiles, assuming that migration at these oldest ages is minimal.

To make estimates for the latest year, it is not possible to use deaths data, as we are interested in the population who are currently or very recently alive. So for each cohort the KT method uses an average of the last five years of ‘age at death’ information to produce an estimate of the number of survivors for the current year.

Each year as more recent deaths data become available to inform the age distribution profiles, estimates for the back years are recalculated and become more accurate. For this reason Estimates of the Very Old (including Centenarians) are always published as ‘provisional’.

Estimates of the very old (including centenarians) for the UK are produced by aggregating the 90 and over single year estimates by sex for England and Wales, Scotland and Northern Ireland.

The numbers reaching very old ages continue to increase. Over the last 30 years, the number of those aged 90 and over has almost tripled.

The chance of surviving to older ages has increased for both males and females over recent decades, contributing to the rising number of those aged 90 and over in the population. Improvements in mortality rates at older ages are due to a combination of factors such as improved medical treatments, housing and living standards, nutrition and changes in the population’s smoking habits.

Although centenarians account for only 3% of the population aged 90 and over and only 0.02% of the overall UK population, their numbers are growing.

In 2013, of the half a million people aged 90 and over in the UK, 72% were female; for those aged 95 and over the percentage who are female increases to 79% and for centenarians, 85% are female. Women outnumber men at older ages because they have higher life expectancy. (According to the latest UK life expectancy figures for 2011-2013, life expectancy at birth is 82.7 years for females compared to 78.9 years for males).

However, although male mortality has been improving faster than female mortality over the whole of the period 1983 to 2013 shown, the fall in the ratio of women to men at ages 90 and over is only apparent from 1990; prior to this time the ratio is rising.

The rises in the number of women aged 90 and over relative to men in the 1980s reflect two major past events, the First World War and the Spanish ‘flu’ pandemic that followed.

The global influenza pandemic that occurred after the War in 1918-19, unlike other strains of ‘flu’, tended to attack young adults as well as younger and older age groups. Young men were disproportionately susceptible compared to young women because many had already been weakened by the war. Together these two major events contribute to the rises in women relative to men at age 90 and over in the 1980s (despite greater improvement in male mortality compared to female mortality at older ages over the whole period) as fewer men were alive to survive to the oldest ages.

In the last decade, the ratio of women to men at older ages has continued to fall. In the UK in 2003 there were 327 women aged 90 and over for every 100 men of that age; by 2013 this had fallen to 256. The fall in the ratio was greater for those aged 100 and over, falling from 823 female centenarians for every 100 male centenarians in 2003 to 586 in 2013 (Figure 6). These falls are due to continued greater improvements in male mortality at older ages relative to female mortality.

The number of people aged 90 and over by single year of age in the population in the UK in 2002-2013 is largely determined by past and current mortality rates but also reflects the number of births 90 years ago and earlier. Past migration patterns and major events like war will also affect numbers.

Distinct birth cohort patterns are also apparent. (A birth cohort is all people born in the same year). These are echos of birth patterns in the years leading up to, during and just after the First World War. 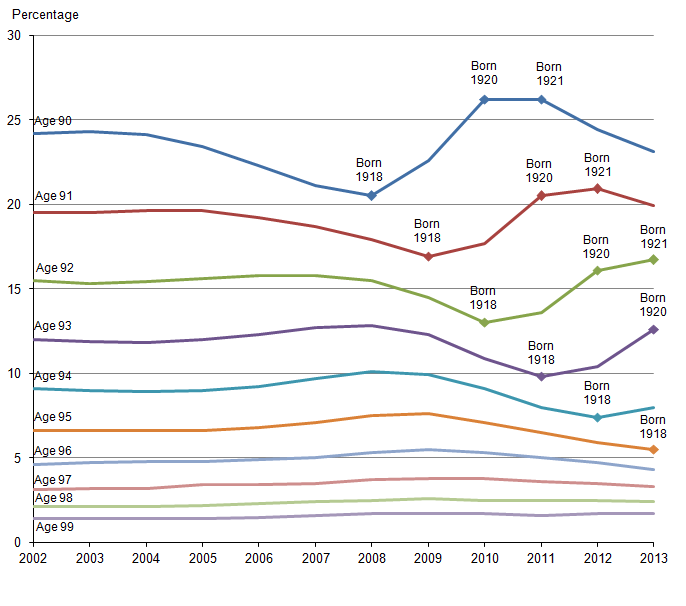 The pattern of changes in the proportions of single year ages over the period 2002-2013 for men and women aged 90 and over separately follow the same pattern over time as for all people, however the proportions of women in the oldest ages are higher than for men, reflecting their higher life expectancy.

Over the last 30 years, the numbers of those aged 90 and over per 100,000 population have increased in all UK countries. The largest increase occurred in England and Wales, with an increase of 511 people per 100,000 over the period, compared with increases of 431 in Scotland and 351 in Northern Ireland.

Although centenarians account for a very small proportion of the age 90 and over population, over the last 30 years their numbers have more than quadrupled in England and Wales as a whole, and more than tripled in Scotland and Northern Ireland (Table 1).

Download this table Table 1: Number of centenarians living in UK countries, 1983 and 2013

Comparing across UK countries the number of centenarians per 100,000 population in 2013 was highest in England and Wales (22) followed by Scotland (16) and Northern Ireland (13).

The ratio of women to men at age 90 and over is higher in Scotland and Northern Ireland than in the rest of the UK, reflecting higher male mortality rates in these countries. In 2013 in England and Wales there were 255 women aged 90 and over for every 100 men of that age; in Scotland and Northern Ireland the equivalent figures were 266 and 274 respectively.

Median age (the age at which half the population is younger and half is older) is an indicator of the age profile of a country. Developing countries have much younger profiles, as indicated by their median ages, than developed countries.

Given these very small proportions, comparing the number of those aged 90 and over per 100,000 in the population more readily enables international comparison (Figure 9).

Download this chart Figure 9: International comparison for the number of people aged 90 and over per 100,000 population, 2013

Canada, the United States of America, Australia and New Zealand have lower numbers of persons aged 90 and over per 100,000 population than many countries in Europe, (708,707,655 and 561 respectively). Australia has one of the world’s highest life expectancies at older ages and New Zealand, Canada and the United States also have relatively high life expectancies at older ages. However, all three countries have younger age profiles (lower median ages) than many European countries meaning older people make up a smaller proportion of the population than in European countries with older profiles. This is because these countries have relatively higher fertility rates and higher historic migration rates.

Countries with more recently emerging economies such as China and India have relatively low numbers of persons aged 90 and over per 100,000 population, 146 and 77 respectively. They have younger age profiles and also have lower life expectancies than nations that have been developed for a longer period of time.

Africa is the least aged region of the world owing both to higher fertility and much lower life expectancy than other world regions. The average number of persons aged 90 and over for the continent as a whole was 26 per 100,000 in 2010.

ONS has an ongoing project reviewing the methods used to produce estimates for the population aged 90 and over and their accuracy. This review includes testing the assumptions inherent in the (KT) Kannisto-Thatcher method and comparing the estimates of the very old and Census estimates with administrative data sources. Results will be published on the ONS website by December 2015.

Estimates of the Very Old are calculated from deaths data. The methodology produces a lower estimate of the total population aged 90 and over in 2013 for England and Wales, for Scotland and for Northern Ireland than the official mid year estimates (MYE) 90 and over population total. However in order to provide users with a consistent set of single year estimates beyond age 89, once produced the Estimates of the Very Old for ages 90 and over are constrained to sum to the 90 and over totals in the MYE for males and females separately (see Methodology section).

There is some degree of uncertainty around all population estimates. In addition to non-response, other possible sources of error in the census estimate for people aged 90 and over include inaccuracies in reporting of dates of birth (for example proxy reporting by carers). Such inaccuracies have been documented in previous censuses1,2.

The methodology used to produce the Estimates of the Very Old (including Centenarians) includes assumptions (namely the accuracy and completeness of the deaths data; the stability of mortality improvement; and no migration at older ages). Recording of date of birth at death registration may be more accurate than reporting of date of birth in the census, however as date of birth on death certificates is not validated there are also likely to be some inaccuracies in this data source.

Initial results from the review indicate that the 2012 MYE 90+ totals that the KT estimates are constrained to are in line with comparable data for this age group available from administrative sources held by the Department of Work and Pensions (DWP) and Department of Health (DH).

Notes for quality and methodological review