This article presents analysis of the three main measures of labour disputes (working days lost, stoppages and workers involved) by industry, region, cause, size and duration. The statistics are put into context by considering estimates of working days lost per 1,000 employees. Data are taken directly from the employer or trade union involved after the Office for National Statistics (ONS) has identified disputes from press reports.

Download this table Table 1: Number of working days lost (WDL), workers involved and stoppages, UK, 2015 and 2016 in progress in year

This can be seen in Figures 1 and 2, where the median number of working days lost per stoppage in a year is more consistent over time than the mean.

Figure 3 shows a time series of working days lost between 1891 and 2016. It shows that the amount of industrial action has significantly reduced in the last 30 years. This is a stark contrast to the level of action seen when the miners went on strike in the 1970s and 1980s. The 1910s and 1920s saw even greater levels of industrial action culminating in the general strike of 1926.

Table 2 presents labour disputes figures for the period 1997 to 2016, while Figures 4 and 5 illustrate working days lost and the number of stoppages respectively. Figures 4 and 5 show that there are a number of spikes in the time series in years when a particularly large strike took place, showing the impact individual strikes can have on the statistics. The high number of days lost in 2011, for example, was due to two large public sector strikes, while the 2002 figure was due to one very large stoppage in the transport and storage industry. A longer time series showing stoppages and working days lost can be found within Dataset Table 1.

Historically, certain industries have been more prone to strike action than others, and breaking the labour disputes statistics down into separate industries can reveal some interesting patterns and shifts over time. However, it should be noted that comparisons between industries can also be affected by the methodology that is used for compiling the figures. For example, because very small stoppages are excluded from the figures (see section 13 “Technical note” for more details), it is more likely that industry groups with large firms will have disputes included in the statistics. In addition to this, caution must be exercised while carrying out time series analysis due to changes in industrial classifications over time.

Table 3 shows labour disputes statistics for 2016 broken down into 13 industry groups (classified according to the Standard Industrial Classification (SIC) 2007). Human health and social work was the largest sector in terms of number of working days lost. However, this high figure for working days lost was largely due to a single dispute involving junior doctors in the National Health Service in England. This industrial group only accounted for 4 out of the 101 strikes recorded for 2016.

Figure 6 shows working days lost per 1,000 employees for the public administration and defence, education, and transport and storage sectors over a 10-year period. It shows how the strike rates for this sector compare with the total strike rate for the economy as a whole.

Dataset Table 2 shows regional strike rates between 2007 and 2016, with a further breakdown of the figures for 2016 by industrial grouping. When interpreting these figures, it is important to bear in mind that the industrial composition of employment in a region is a major influencing factor on the scale of labour disputes it experiences. The regions with the highest strike rate in 2016 were the North East and London (16 working days lost per 1,000 employees). All of the regions except Northern Ireland and Wales showed an increase compared with 2015. Looking at the figures over the 10-year period from 2007 to 2016, the North East has shown the highest strike rate and the East of England has shown the lowest. 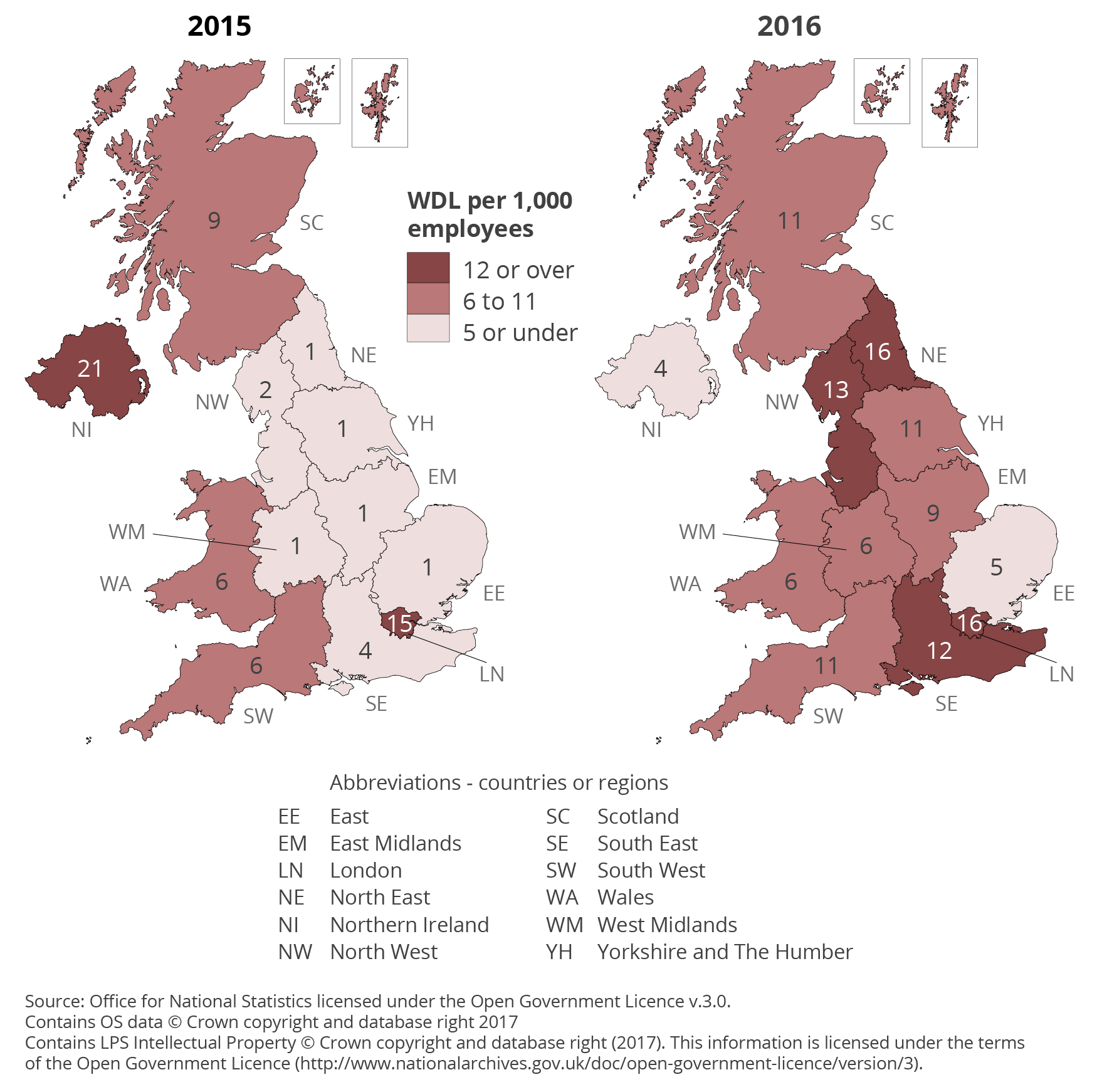 However, in terms of the number of workers involved, the main cause of industrial action in 2016 was redundancies, which accounted for 86,100 workers (55.9% of all workers involved in industrial action in 2016). Figure 8a and Dataset Table 4 give information on working days lost by cause of dispute in each year. The figures are often dominated by one or two very large strikes, which can make comparisons over time difficult.

Looking at the figures from 2007 to 2015, pay was the main cause of disputes in each year except for 2009 and 2010 when, following the economic downturn, redundancies were the main cause. However, the figures for 2016 show a different picture with most disputes being accounted for by causes other than pay or redundancy. Figure 8b breaks down this “Other” category into more detail and shows that the main cause of disputes within this category was duration and patterns of hours worked. This was mainly due to a dispute involving junior doctors in the National Health Service in England.

Figure 8b: “Other” working days lost by principal cause of dispute, UK, 2016

Download this chart Figure 8b: “Other” working days lost by principal cause of dispute, UK, 2016

Figure 9: Number of stoppages in progress by duration of dispute, UK, 2016

Download this chart Figure 9: Number of stoppages in progress by duration of dispute, UK, 2016

Download this table Table 5: Stoppages in progress by size of dispute, UK, 2016

Download this table Table 6: Number of working days lost (WDL) and stoppages by public and private sector, UK, 2007 to 2016

Annual trade union ballot data from 2002 to 2016 are presented in Tables 7 and 8. The number of ballots has fallen to 488 this year, the lowest since records from Electoral Reform Services began in 2002.

The number of ballots resulting in a vote for strike action in 2016 shows a decrease on the previous year, from 503 in 2015 to 436 in 2016. The time series for trade union ballots is illustrated in Figure 12. This chart shows that a high percentage of ballots calling for strike action result in “yes” votes, with 93.6% in 2016.

Information regarding labour disputes within the UK is collected by the Office for National Statistics (ONS) from a variety of sources. The information is collected directly from the employer or trade union involved after we have identified disputes from press reports. We publish figures on labour disputes each month. They appear in the Labour Market Statistical Bulletin.

The statistics cover stoppages of work in progress in the UK during a year caused by labour disputes between employers and workers, or between workers and other workers, connected with terms and conditions of employment. A distinction can be drawn between stoppages that started in the current year and those that started in earlier years.

The statistics exclude disputes that do not result in a stoppage of work, for example, work-to-rules and go-slows; this is because their effects are not quantifiable to any degree of certainty. Stoppages involving fewer than 10 workers or lasting less than 1 day are also excluded unless the total number of working days lost in the dispute is 100 or more.

Stoppages over issues not directly linked to terms and conditions between workers and employers are omitted, although in most years this is not significant. For example, in 1986 one stoppage was considered to be political (a protest in the coal industry against the visit of an MP) and it was excluded from the figures. The total working days lost amounted to less than 1,000. The next known dispute to be excluded was in 1991. This involved a boycott by self-employed market traders who, after increased rent and changes to the market rules, kept their stalls closed for about 20 weeks.

The statistics include “lock-outs”, that is, where an employer prevents their employees from working by refusing entry to the place of work, and “unlawful”, that is, unlawfully organised strikes. However, no distinction is made between a “strike” and a “lock-out” or between “lawful” and “unlawful” stoppages. This is principally because of the practical difficulty in deciding in which category a particular stoppage falls. It was for similar reasons that a distinction between “official” and “unofficial” disputes was no longer made after 1981.

Working days lost are defined as the number of days not worked by people as a result of their involvement in a dispute at their place of work. In measuring the number of working days lost, account is taken only of the time lost in the basic working week. Overtime work is excluded, as is weekend working where it is not a regular practice.

Where an establishment is open every day, and runs two or more shifts, the statistics will record the number of working days lost for each shift. In recording the number of days lost, allowance is made for public and known annual holidays, such as factory fortnights, occurring within the strike's duration. No allowance is made for absence from work for such reasons as sickness and unauthorised leave.

Where strikes last less than the basic working day, the hours lost are converted to full-day equivalents. Similarly, days lost by part-time workers are converted to full-day equivalents. The number of working days lost in a stoppage reflects the actual number of workers involved at each point in the stoppage. This is generally less than the total derived by multiplying the duration of the stoppage by the total number of workers involved at any time during the stoppage, because some workers would not have been involved throughout.

In disputes where employers dismiss their employees and subsequently reinstate them, the working days lost figure includes those days lost by workers during the period of dismissal.

For disputes where employers dismiss their employees and replace them with another workforce, the statistics cannot assume that working days lost by the sacked workers continue indefinitely. In such cases, the statistics measure the number of days lost in terms of the size of the replacement workforce. For example, where an employer initially recruits 100 workers and wishes to build up to 300, the number of working days lost on the first day will be 200 and will then progressively reduce on subsequent days, eventually to zero when the new workforce reaches the target of 300.

Figures given for working days lost per 1,000 employees use employee jobs for each year taken from our most recent estimate of Workforce Jobs.

There are difficulties in ensuring complete recording of stoppages, in particular for short disputes lasting only a day or so, or involving only a few workers. Because of this recording difficulty and the cut-off applied, the number of working days lost is considered to be a better indicator of the impact of labour disputes than the number of recorded stoppages.

Although the Electoral Reform Service (ERS) conduct the majority of industrial action ballots for trade unions in the UK, other organisations also conduct ballots. In addition to this, ballots with less than 50 union members do not have to appoint a scrutineer.