This bulletin shows the latest main labour market statistics for the regions and countries of Great Britain, along with statistics for local authorities, travel-to-work areas and parliamentary constituencies.

Also in this release

The employment rate estimates for those aged 16 to 64, for the 3 months to February 2015, compared to the 3 months to November 2014, showed increases for nearly all of the regions and countries of the UK.

The largest increases in the employment rate estimates were for the North West and Wales, at 1.1 percentage points. The only region to show an estimated decrease for the latest period was the East of England, at only 0.1 percentage point.

For all regions, including the East of England, the general pattern is for flat or gently increasing employment rates. With the exception of Wales, the latest employment rate estimates are higher than the same period 1 year ago.

The employment levels for the North West, Yorkshire and The Humber, South East and South West are all at record highs, with most other regions close to record highs.

Regional estimates for the unemployment rate are quite volatile, which needs to be allowed for when considering the pattern of change over time.

The unemployment rate for the North East remains the highest in the UK, at 7.7%.

The Claimant Count for March 2015 compared with February 2015, is showing decreases in the count for both men and women across all regions of the UK. However, the rate of decrease in the North East has slowed compared with the rest of the UK.

An interactive chart showing regional unemployment rates over time is available on our website.

Workforce Jobs increased in 7 of the 11 regions of Great Britain between September 2014 and December 2014. The largest increase of 40,000 was in the South East, followed by the South West, which increased by 30,000. The largest decrease of 14,000 was in Yorkshire and The Humber, followed by the East of England and Scotland, which both decreased by 10,000. 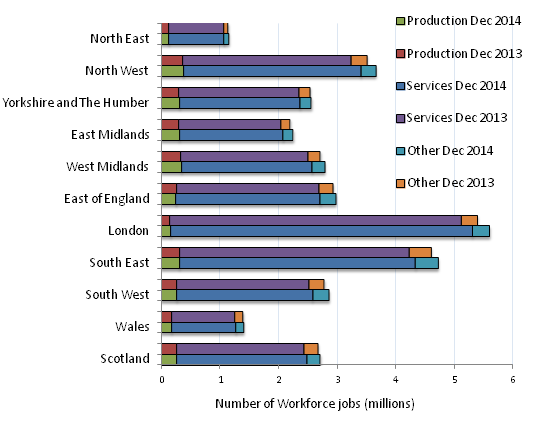 The region with the highest rate in Great Britain was the North East, at 4.0%, remaining unchanged from the previous month. The next highest rates were in Yorkshire and The Humber, and Wales, both at 3.2% and the West Midlands, at 3.0%.

Indicators from the Annual Population Survey

For the period January 2014 to December 2014, the local authorities with the highest employment rate in Great Britain, were the Orkney Islands, at 89.3%, East Northamptonshire, at 86.4%, and Oadby and Wigston, at 85.9%. Liverpool is now the only local authority with an employment rate lower than 60%; at 59.2%. 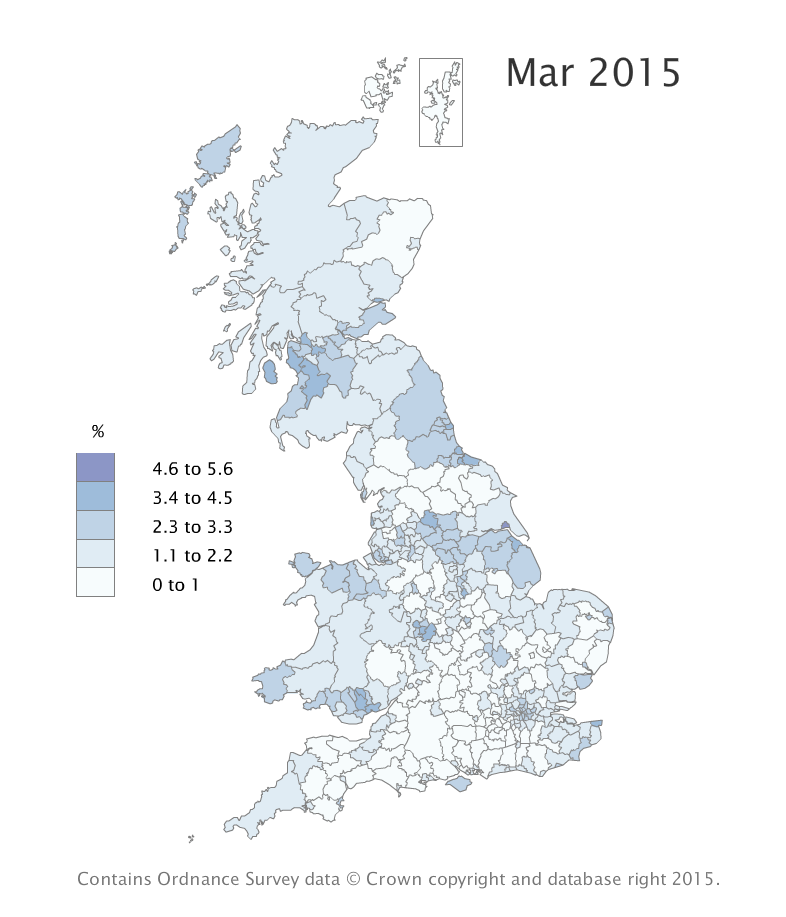 LFS headline indicators (Employment, unemployment and inactivity); Employment and Workforce Jobs estimates; Claimant Count; and Economic Activity and Inactivity estimates for each region are available in the following tables: