The drop in the unemployment rate occurred alongside a slight increase in both the activity rate (the proportion of people aged between 16 and 64 who were economically active) to 78.4%, and the participation rate (the proportion of people aged over 16 who were economically active) to 63.6% in the 3 months to January 2017. Similarly, the employment rate remained at a record high of 74.6%, while the ratio of redundancies to employment remains at a low level compared to historical averages. The number of vacancies has remained relatively steady since early 2015 after rising strongly over 2012 to 2014.

Recent movements in nominal wages are occurring alongside a pick-up in consumer price inflation. Adjusted for inflation, average weekly earnings increased by 0.7% including bonuses, and by 0.8% excluding bonuses, compared with a year earlier. This is the weakest growth in real earnings since November 2014. 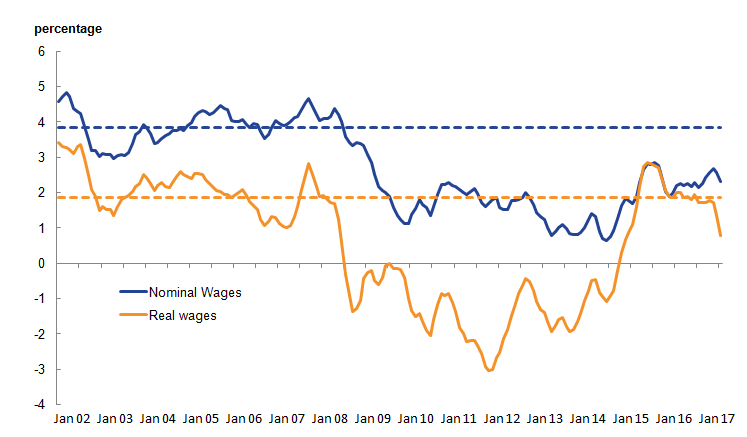 One key indicator of strength in the labour market is the number of vacancies, which has remained relatively steady since early 2015 after rising strongly over 2012 to 2014.

Vacancies remained broadly unchanged in the 3 months to February 2017. Figure 3 shows the percentage change in vacancy levels for the 3 months, compared to the previous overlapping three months, broken down by 3 major sectors of the economy – production, construction, and services. Manufacturing, which represents around 7% of vacancies, is included in the production series.

Figure 3: Contribution to change in vacancy level by sector

Download this chart Figure 3: Contribution to change in vacancy level by sector

These data show that the services sector contributes the majority of the percentage change in vacancies each quarter, with a much smaller share accounted for by changes in production and construction vacancies.

The impact of the economic downturn between 2008 and 2009 can be clearly seen, with a 14% fall in vacancies between the third (July to September) and fourth (October to December) quarters of 2008. Vacancy growth has been broadly positive since early 2012, coinciding with a rising UK employment rate.

Since April to June 2015, vacancy growth has been erratic. However, it has been less volatile than the period following the downturn. December to February 2017 saw a rise in overall vacancies, driven by a rise in vacancies in the services and construction sectors.

In recent years, various indicators point to a tightening in labour market conditions. One measure of labour market tightness is the ratio of unemployment to vacancies (Figure 4), giving an indicator of both the demand and supply for labour and job competition.

During the period from 2002 to 2007, the unemployment-to-vacancy ratio averaged 2.5 and deviated from this average by no more than plus or minus 0.4 points throughout this period. Given that the consistency of this ratio pre-downturn was also in line with the relatively stable unemployment rate at a time when there was little slack in the labour market, the average over this period is a potential benchmark for tightness in the labour market. The ratio more than doubled to reach 5.7 at the start of the economic downturn, indicating an opening up of labour market slack and higher competition for vacancies. The ratio remained relatively high compared with before the downturn during 2009 and 2010 then began to steadily fall towards the end of 2011. This coincided with the start of the fall in the unemployment rate, when the labour market began to show signs of improvement for those both in work and looking for work.

Download this chart Figure 4: Unemployment-to-vacancy ratio and its 2002 to 2007 average

In mid-2015, the unemployment-to-vacancy ratio dipped below its 2002 to 2007 average for the first time since mid-2008, reflecting both falling unemployment numbers and rising vacancies for several years. It has more recently reached 2.1 in the 3 months to January 2017 – its lowest level since November to January 2005.

Figure 5 plots the vacancy rate against the unemployment rate over time, creating a Beveridge curve1. For most of the period before 2008, the Beveridge curve remained in a relatively narrow band with the economy moving up and down the curve, which may indicate economic stability. During the economic downturn in 2008 and 2009, firms no longer found it profitable to hold onto staff or open vacancies. As a result, the unemployment rate increased and the vacancy rate decreased, causing a movement down the Beveridge curve. 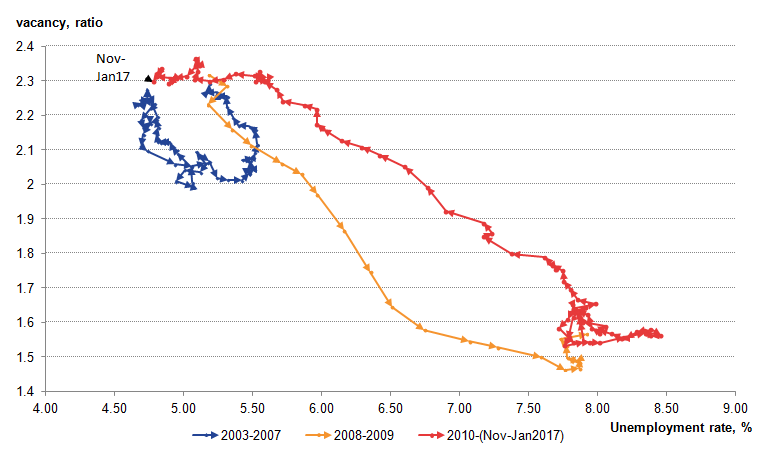 This may be caused by an improvement in matching efficiency compared to the 2008 to 2009 downturn period. If firms are opening fewer vacancies because they are content with recent matches and the skills workers offer, then this will coincide with a downward shift in the Beveridge curve. Demand conditions will then affect future movements along a slightly tighter Beveridge curve if this is established over time.